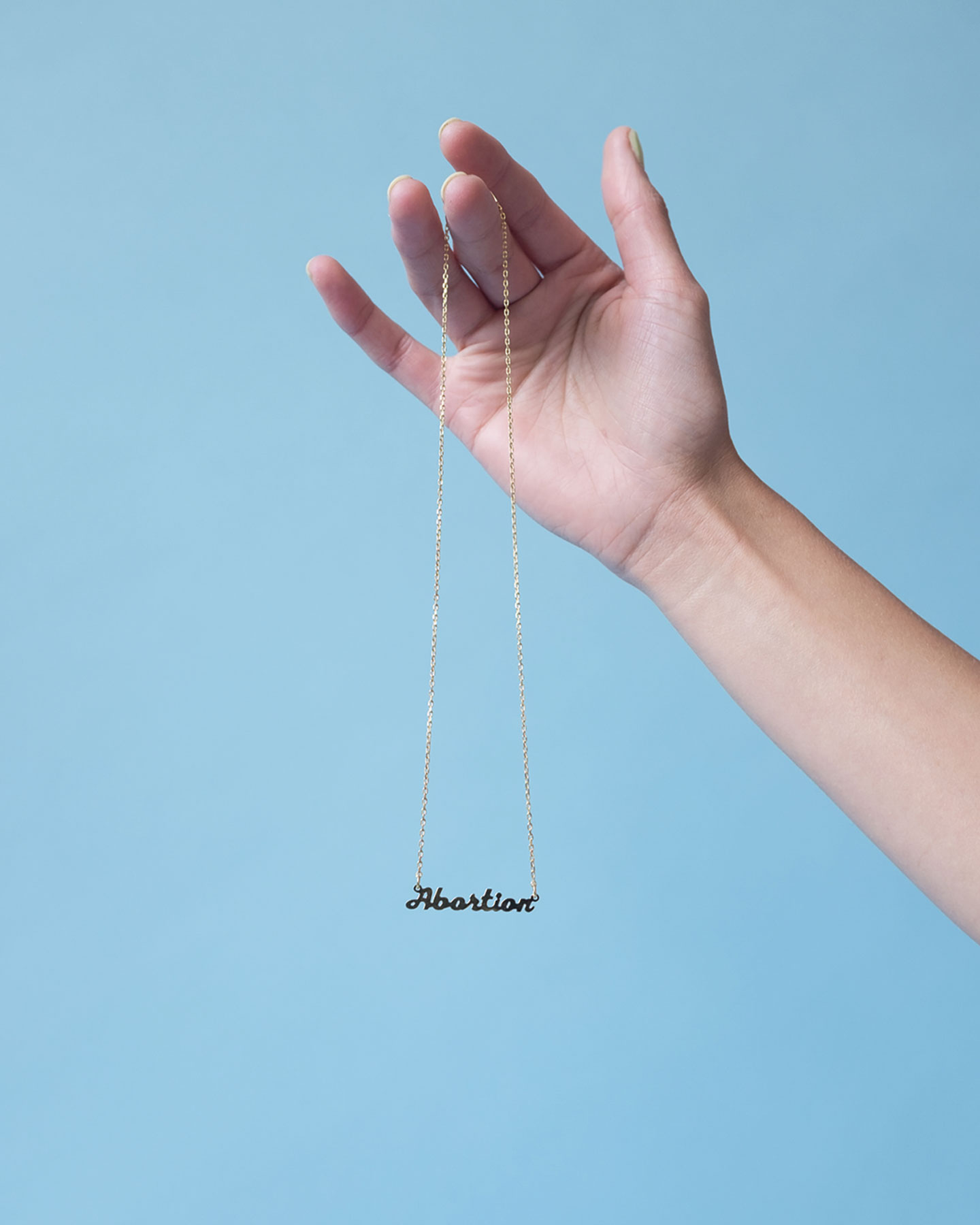 I own a tote bag that says “I had an abortion” in blue block letters. I also have a T-shirt that says “Everyone loves someone who had an abortion.” You can get a pro-abortion holographic fanny pack as part of a fundraiser for the National Network of Abortion Funds. In Shout Your Abortion’s online store, there’s a gold necklace that reads “Abortion” in the script font of a nameplate and sweatshirts that read “El aborto es normal” in gothic letters reminiscent of the New York Times logo. There are simple statements, like the T-shirts that implore “Ask me about my abortion” in plain sans serif white letters on a black field. Some items are snazzier, like the gold notebook and the pair of shiny purple earrings from the NNAF, both of which proclaim “Fund abortion, build power.”1

These items are supposed to be bold, even provocative, attracting stares and prompting questions. This is the whole point: to interrupt the silence around abortion, to get people to talk about it more frankly. They’re supposed to make viewers a tad uncomfortable, taken aback—and are also supposed to make them wonder why they feel that way.2

An estimated one in four women will have an abortion before the age of 45—along with a number of trans and nonbinary people, as activists are quick to point out—but the experience of abortion is wildly more common than the opportunity to safely speak about it. Perhaps no other hot-button cultural issue or area of political controversy and certainly no other health care procedure is spoken about with such a strange distance from the experiences of those who have gone through it. This is doubly strange because these people are all around us, in our homes and in our families, working beside us in the office and playing games on their phones in the subway.3

The expertise of abortion patients is everywhere, but it’s largely unsolicited, largely concealed, and mostly absent from our public conversations about reproductive freedom, which are rarely conducted in the first person. Everyone knows women who have had an abortion, but many of us don’t know who in our lives—or who besides ourselves—is among them. If you ask the women in your life, probably only some of them will tell you the truth.4

The recent wave of pro-choice merchandising is part of a growing effort to change this, an effort that has a long history. For years, feminists have embarked on public projects meant to change hearts and minds about abortions and the people who have them. Many of these have focused on the confessional, with women speaking about their abortions in an effort to humanize and contextualize the issue.5

The most visible effort to move first-person abortion storytelling into the public eye began during feminism’s second wave era. In March of 1969, the New York City socialist feminist group Redstockings arranged for women to tell their abortion stories not in whispers or behind closed doors but in public, on the steps of Greenwich Village’s Washington Square United Methodist Church. Twelve women spoke about their experiences as abortion patients in front of about 300 people, four years before the Supreme Court’s decision in Roe v. Wade.6

That year, the attorney Emily Jane Goodman wrote a brief for a case before a New York federal court, Abramowicz v. Lefkowitz, that challenged abortion restrictions on the basis of not doctors’ rights but women’s. The case was built around the depositions of women who had had abortions, who testified about their experiences and asserted that access to abortion was crucial to their civil rights.7

These group efforts flatly rejected stigma. They brought women’s accounts of abortion into the public square and into the legal system. Their abortions, they said, did not stand in contrast to their dignity and virtues; instead, abortion enabled them. In 2016, Goodman joined more than 100 other lawyers in signing an amicus brief that was filed with the Supreme Court. “To the world, I am an attorney who had an abortion,” the brief opened, “and to myself, I am an attorney because I had an abortion.”8

In recent years, feminist efforts to combat abortion’s stigma have become more organized and sustained, moving from group demonstrations in the activist sphere to ongoing projects conducted in the mainstream. Pro-choice organizations like Planned Parenthood have branched out into the entertainment industry, offering consulting services to Hollywood studios and producers. Other activists, too, have become involved in TV and film productions in an attempt to ensure that pop culture depictions of abortion are more accurate and more compassionate toward patients. It’s a gradual process, changing minds about abortion, but these days it’s arguably faster and more reliable than trying to change policy through legislation or the courts. As hope fades for abortion rights activists in the legal sphere, the cultural realm has become an increasingly important battleground.9

Just a few years ago, depictions of abortion on TV were on the whole less realistic and less progressive than they are now. According to Steph Herold, a data analyst at Advancing New Standards in Reproductive Health, a program at the University of California, San Francisco, these efforts are working. She cites episodes of House and Grey’s Anatomy with flat-out inaccuracies. “Many shows,” she writes in an e-mail, “depict abortion as a serious surgery that requires multiple clinicians that is always performed in a hospital, and that’s just not the case in reality.”10

More recent television shows have been more accurate and more honest about the realities of abortion—and the ways that unnecessary restrictions hurt patients. Jane the Virgin ran an episode in 2016 that Herold considers particularly effective, in which Jane’s mother, Xiomara, has a medication abortion. “I love it because Xiomara’s daughter and partner support her. There’s no hand-wringing about her decision. There’s nothing emotionally fraught about it,” Herold says. A 2016 episode of BoJack Horseman “managed to make many hilarious abortion jokes at the expense of abortion restrictions while highlighting the importance of providing compassionate support to people through their abortions.” In addition to depicting the procedure itself, a 2018 episode of Claws managed to highlight inequities in abortion access. “I really appreciated that this show had characters talk about racism inherent in the foster care system, and how people struggle to come up with the cost of an abortion,” Herold points out. “You often don’t see those systemic issues related to abortion access addressed on TV.”11

Positive cultural representations of abortion seek to transmit sympathy and compassion as well as accurate information, transferring these elements from TV shows and movies into the minds of viewers through a kind of political osmosis. But like the tote bags and T-shirts soliciting people to “ask me about my abortion,” they’re also intended to provoke real-world conversations, to encourage people to tap into the expertise of former abortion patients, or to speak about their experiences without secrecy or shame.12

That’s the thing about stigma: It’s a self-perpetuating phenomenon. The more stigmatization compels patients to remain silent about their abortions, the more others feel isolated in their abortion experience, more threatened by the same stigma and more likely to hide. Silence begets silence. Feminist destigmatization efforts attempt to interrupt the cycle, to signal to people who have had abortions that they are not alone—and to people who haven’t that abortion is common, respectable, and decidedly not tragic.13

How Abortion Funds Showed America That ‘Roe’ Is Not Enough

Yet I wonder about these efforts and what they ask people to do. Efforts to destigmatize abortion that rely on women to disclose their experiences ask them to perform a public service; they’re deputized to overcome shame, ease the nerves of judgmental outsiders, combat disinformation. Women end up being tasked to fix the very conditions that victimized them.14

And after all, there are still good reasons to keep your abortion (or abortions) under wraps. Anti-choice forces are passionate and galvanized, emboldened by the ascent of Donald Trump and the appointment of conservative judges to the federal courts, and they do not shy away from the idea of enacting their opinions through force. “People can threaten you and dox you, people can try to get you fired, people can come after your family members” if you speak publicly about your abortion in an activist context, says Renee Bracey Sherman, a reproductive justice advocate and the founder of the abortion storytelling group We Testify. “All of that has happened to me.”15

But for combating so pervasive and persistent a stigma, the options are few. How else do you convey that your abortion does not make you immoral or stupid or frivolous, other than by asserting that it is part and parcel of your whole self, a self that displays its own virtues—your moral commitments, your responsibility, your intellect? How else, other than extending these gestures of solidarity to one another, do we provide what Bracey Sherman calls “love and support” to those who feel ashamed and alone? Abortion storytelling isn’t new, she reminds me; women have always told one another about their abortions. In fact, these kinds of conversations are a big part of how women learn about ways to end pregnancies. What’s new now is that they’re mainstream.16