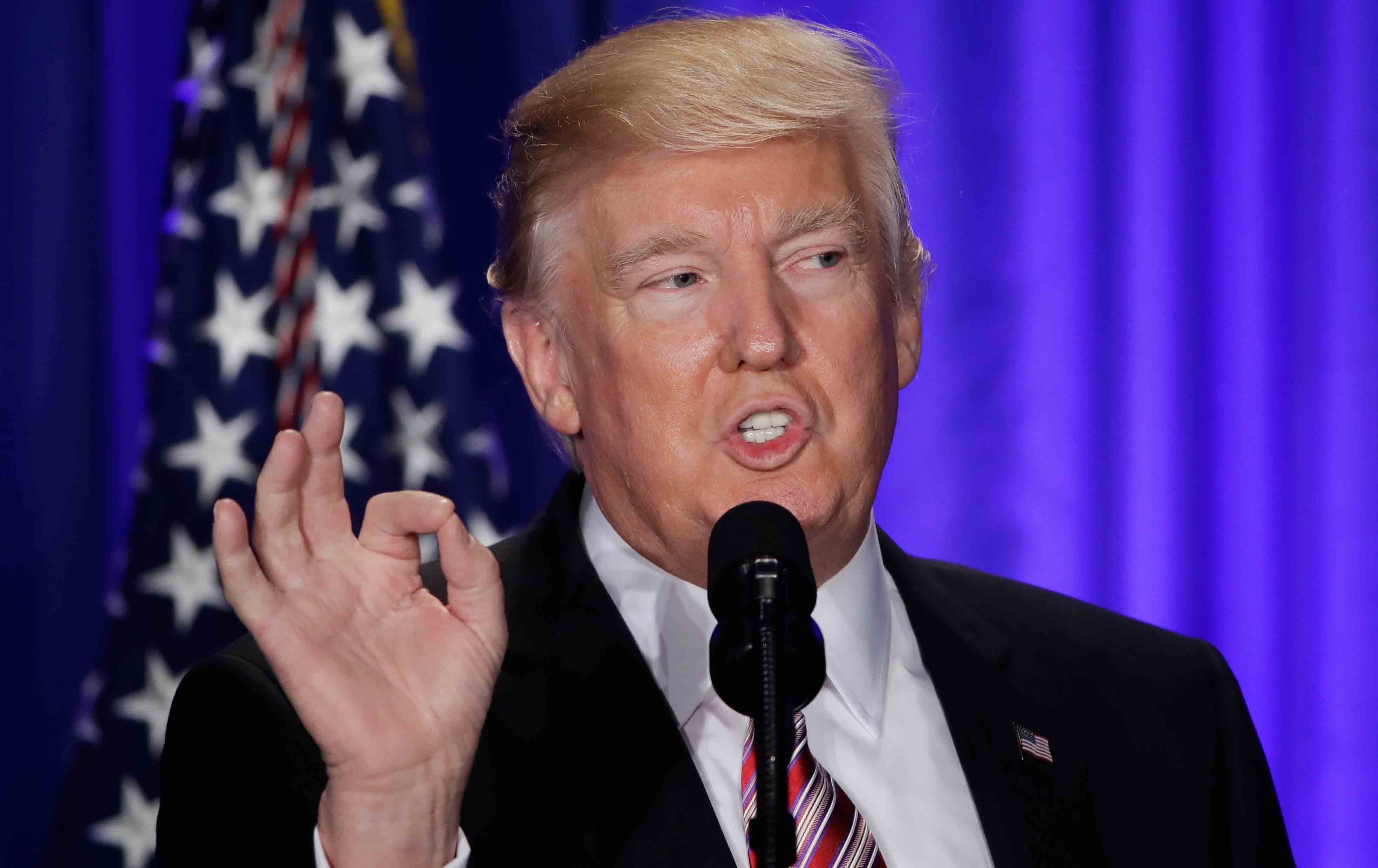 The first week of Donald Trump’s presidency has been overwhelming—a flurry of executive orders, appointments, bizarre tweets, even stranger press conferences, and public appearances and interviews from the president that generated massive attention and controversy.

Whether by design or accident, this dust storm of news has partially obscured what policy changes Trump has actually made. And these are what really matter. To that end, we have begun a weekly feature that will recap some of the most important concrete actions taken by the Trump administration. Here is week one.

Obamacare
Trump signed an executive order over the weekend that directs federal agencies to “exercise all authority and discretion available to them to waive, defer, grant exemptions from, or delay the implementation” of the Affordable Care Act, or Obamacare. The New York Times said the order “should be seen more as a mission statement, and less as a monarchical edict that can instantly change the law.” But it could still scare health insurers into pulling out of the ACA marketplaces, which would set off a market collapse.

Global Gag Rule
Trump reinstated the Mexico City Policy via a presidential memorandum on Monday. Also called the Global Gag Rule, it prevents foreign NGOs that receive US aid from using funds from any source, including non-US funding, to “perform or actively promote abortion as a method of family planning”—effectively forbidding them even to refer patients to other abortion providers. If health groups don’t comply, they’ll lose US assistance. Formerly the policy applied only to family planning funding, a pot of about $600 million. But Trump expanded it to all global health aid, which amounts to some $9.5 billion. As Zoë Carpenter noted this week, policy experts predict this will mean 6.5 million more unintended pregnancies, 2.2 million more abortions, 2.1 million more unsafe abortions, and the deaths of 21,700 pregnant women.

Federal Regulations Freeze
On his first day, Trump ordered a government-wide freeze on on federal regulations that haven’t been published in the Federal Register yet. Many are harmless, but many are not—like a rule about inspecting airplane fuselages for cracks.

Federal Hiring Freeze
There will be a hiring freeze on federal workers, thanks to a presidential memorandum Trump signed Monday. Across the federal government, this means no new positions will be created, with limited exceptions, and no vacant positions will be filled. (Trump excepted military personnel, which is one-third of the federal workforce.) The memo has many broad exemptions that may allow agencies to keep filling vacant spots or even creating new ones, but to the extent it’s effective, it may end up costing the government more money—-since private contractors will be hired to fill in any gaps.

Trans-Pacific Partnership
The United States is no longer a party to the Trans-Pacific Partnership, after Trump formally withdrew on Monday. As David Dayen wrote this week, Trump simply “add[ed] the tombstone to an already dug grave.” Congress had not ratified the deal, and it was almost impossible to see how it would have even if Trump suddenly favored the trade pact. This was also foretold before Election Day, since Hillary Clinton was also opposed to the deal.

Keystone XL and DAPL
Trump restarted the Keystone XL and Dakota Access Pipeline projects with presidential memorandums on Tuesday. The Obama administration rejected both projects on environmental and land-use grounds, but Trump tried to clear the way for them to restart. He also ordered the commerce secretary to explore ways to ensure pipelines and other infrastructure projects use American-made materials. That order may just be duplicative of the 1933 Buy America Act, and thus might not change anything. One shouldn’t assume the two pipelines will automatically be built, either. There are a lot of economic reasons that Keystone may no longer be feasible, and although the company moved quickly on Thursday to resubmit its application to build the pipeline, the State Department has to find a way to say yes. Whatever it decides will almost certainly be challenged extensively in court. The Army Corps of Engineers, meanwhile, is reviewing the Dakota pipeline’s path under Lake Oahe. Trump asked them to speed up and approve it, but he doesn’t really have legal authority to make them do that. “Executive orders are legal orders—they’re law—but they can’t contravene legislative enactments. So an executive order can’t say, ‘Ignore the [National Environmental Policy Act] and give me a pipeline,’” one expert told The Atlantic.

Immigration
Trump signed several executive orders on immigration that would ostensibly begin construction of his infamous wall along the Mexican border. But once again there’s more talk than action—Trump can’t authorize the massive spending needed to build the wall without congressional appropriations. He merely directed federal agencies to shift a little money around, and also to outline requests to Congress asking for what money will be needed. The orders also dramatically broadened which undocumented people should be prioritized for deportation, including someone who “in the judgment of an immigration officer, otherwise pose[s] a risk to public safety or national security.” (Read: anyone). Among the other features that terrified immigration-rights advocates: expanded detentions centers, including more privately run facilities; hiring 10,000 more immigration officers (if Congress approves the money); stripping federal funding from cities that refuse to cooperate with federal immigration authorities; and the planned weekly publication of crimes committed by undocumented immigrants.

Then, on Friday afternoon, Trump signed an executive order preventing immigrants and other travelers from seven Muslim-majority countries from entering the US for at least 90 days; barring all refugees for 120 days; and blocking entry to Syrian refugees indefinitely. Besides Syria, the order affects travelers from Iran, Iraq, Libya, Somalia, Sudan, and Yemen. Originally it applied to visa and green card holders, as well as dual citizens. (The Trump administration announced later the ban would not apply to legal residents.) Hundreds of people who were previously approved to enter the US were stranded at airports, including the 12-year old daughter of an American citizen who was stuck in limbo in Djibouti, facing a return to warn-torn Yemen. Meanwhile, thousands of people showed up at airports across the US to protest. Lawyers immediately challenged the ban in court, and won partial stays from judges in New York, Boston, Seattle, and other cities. But most of the rulings apply only to travelers who were already on their way to the US, and as of Sunday US Customs and Border Patrol agents were reportedly still detaining as many as dozens of travelers.

Net Neutrality
Trump named Ajit Pai as the chair of the Federal Communications Commission. Pai is already a member of the commission, and will no doubt use his chairmanship to scrap or restrict net-neutrality rules, which he has long opposed. He also opposes recent broadband privacy reforms and regulations on cable top boxes.

Communications Blackout
Wide swaths of the federal bureaucracy went into a virtual blackout this week, as “Trump administration officials instructed employees at multiple agencies in recent days to cease communicating with the public through news releases, official social media accounts and correspondence.” (Some national parks went rogue and tweeted out information about climate change that was swiftly deleted. This lead to an array of “alt” national parks accounts that claim to be run by silenced employees, though it’s not clear they actually are.)

James Comey
Trump retained James Comey as FBI director, following his spectacular malfeasance and interference in the November election. Of course, it benefited Trump, so this should be no surprise. (Trump also blew a kiss at Comey during a public appearance at the White House.)

Short of a General Strike, How Can Labor Stop Trump from Stealing the Election?