So much art is about the experience of growing older. Young artists create as though they’ll never age and feel that if they do, it won’t be like their elders; the older ones sometimes wrestle with more pressing, material concerns, like the view outside one’s window. The best material, in both cases, turns inward—moving the small things that make up a life into the realm of the immortal. For musicians, whose art provides the soundtrack to our lives, aging seems to deliver a real clarity to their work. David Bowie’s Blackstar and Leonard Cohen’s You Want It Darker, the last albums they released before their deaths, are masterpieces that reckon, devastatingly, with the end. And every year there’s a new crop of musicians who start on their journeys to the finish line.

In the early 2000s, the power of the establishment music press began to wane, and blogs stepped into the breach as kingmakers in their own right; a feature on, say, Gorilla vs. Bear or Said the Gramophone could propel unknowns to stardom as hype sloshed from blog to blog to record label.

I mention this because the music-blog days are over, and anyway, most of them are dead. Some of those people the blogs championed flamed out, but others managed to make it. Perhaps the most successful of those groups is Vampire Weekend, the Columbia-grad ex-prepsters who managed to create a trio of records that most critics agree are unimpeachable. As the story goes, a leaked CD-R demo made its way online, and from there, the quartet signed to XL and began showing up everywhere. (To give you an idea of the times: It was the first band to be interviewed for a Spin cover story before releasing a debut album.)

Vampire Weekend’s fourth record, Father of the Bride, comes a full six years after the band’s Grammy-winning third effort, Modern Vampires of the City, and it’s a document of not only how much the group’s music has matured in that furlough but also how the members have all grown up. Rostam Batmanglij—the main producer on Vampire Weekend and Contra, the group’s first two records—has left the band to strike out solo (although he appears on FOTB as a producer). Frontman Ezra Koenig took some time off to create an anime-inspired television show and became a father. The passage of time is clear in his lyrics; the songs deal more directly with loss, pain, and how inevitable they are in the course of one’s life. You could see the early stuff now as a bildungsroman, a coherent narrative that Vampire Weekend has grown out of. 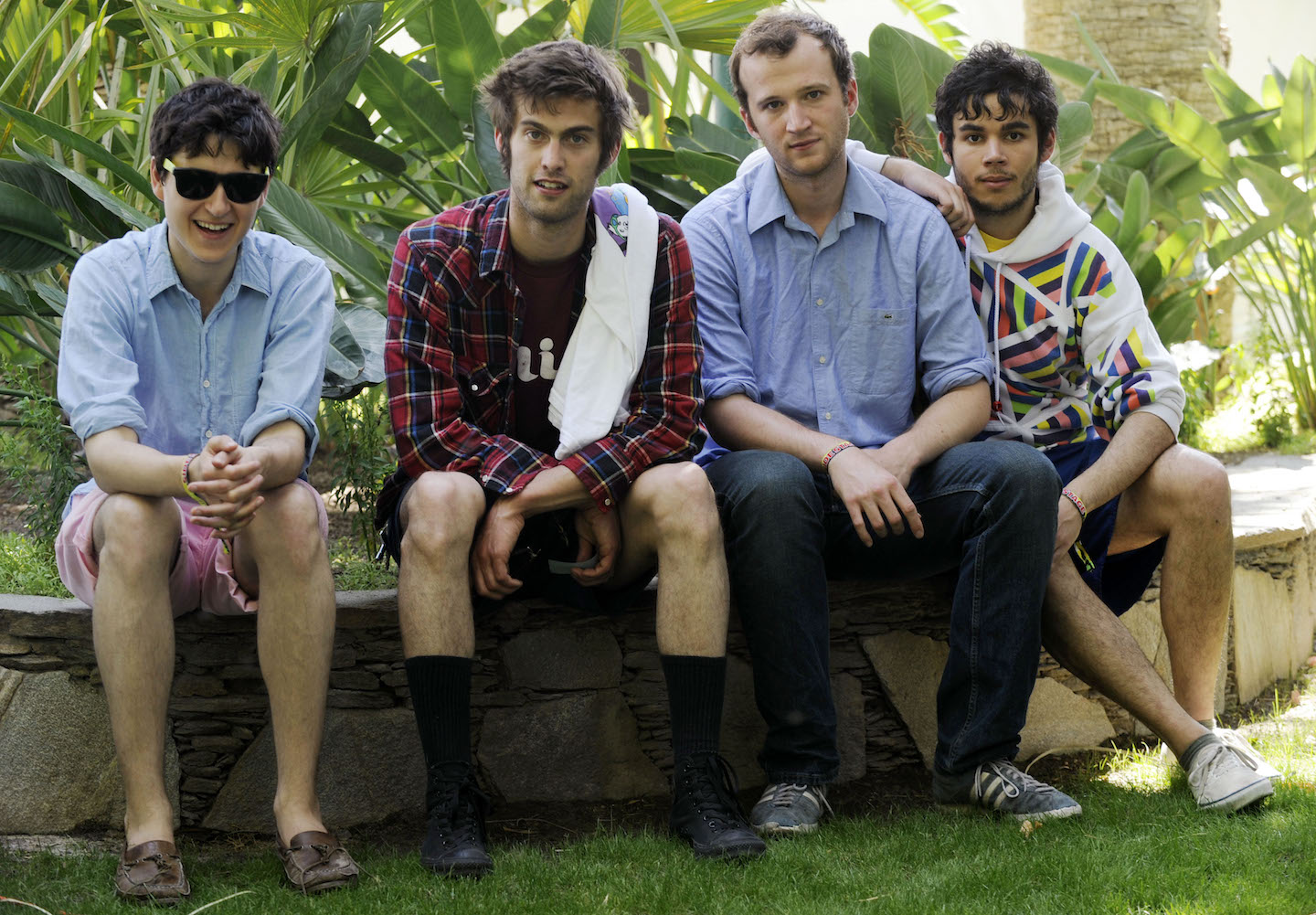 It’s evident from the first track how much the band’s sound has changed as well: “Hold You Now” mostly abandons the group’s traditional African-inflected prepster pop for something more countrified, shimmering with pedal steel and plucked acoustic guitar. If not for Koenig’s sweet warble and the slightly distorted backing choir, it would be easy to mistake the song as an offering from an up-and-coming country star trying on a new sound. It’s unusually mournful, too, as an account of the last night two former lovers spend together before one becomes a bride. “Leaving on your wedding day / All calm and dressed in white / All I’ll keep’s the memory of one last crooked night / The pews are getting filled up / The organ’s playing loud / I can’t carry you forever, but I can hold you now,” Koenig sings. And then Danielle Haim of the Los Angeles pop-rock trio Haim answers him, “I know the reason why you think I oughta stay / Funny how you’re telling me on my wedding day / Crying in those rumpled sheets / Like someone’s ’bout to die / You just watch your mouth when talking ’bout the father of the bride.”

Next up is “Harmony Hall,” the lead single released from FOTB. It sounds more classically Vampire Weekend, if not in its instrumentation—acoustic guitar, piano, relatively minimalist percussion—then in its bright vibe. It’s like a college campus in the spring or summer, except the lyrics are much, much darker. (It’s worth noting that Harmony Hall is the name of a dorm on the Columbia University campus, where Koenig and the rest of the band went to school, although he has said it’s not about that building at all.) In the chorus, he seems to lay out the facts of life. What he’s saying is true, though not necessarily pretty: “Anger wants a voice / Voices wanna sing / Singers harmonize / Till they can’t hear anything / I thought that I was free / From all that questionin’ / But every time a problem ends / Another one begins.” It’s a joyful lamentation, one that sounds as if it came from a jam band like the Grateful Dead or Rusted Root, as The Atlantic’s Spencer Kornhaber deftly points out. That mostly comes from the instrumentation and the genre’s trademark sunny slouchiness. It sounds like your dad’s music. “This life,” the record’s fourth song, pulls off the same trick, juxtaposing a couple of jaunty guitars with the end of a bad relationship and the larger existential question of how to live. The chorus is “This life / And all its suffering / Oh, Christ / Am I good for nothing?” Aren’t the existential questions supposed to be the hardest to answer? 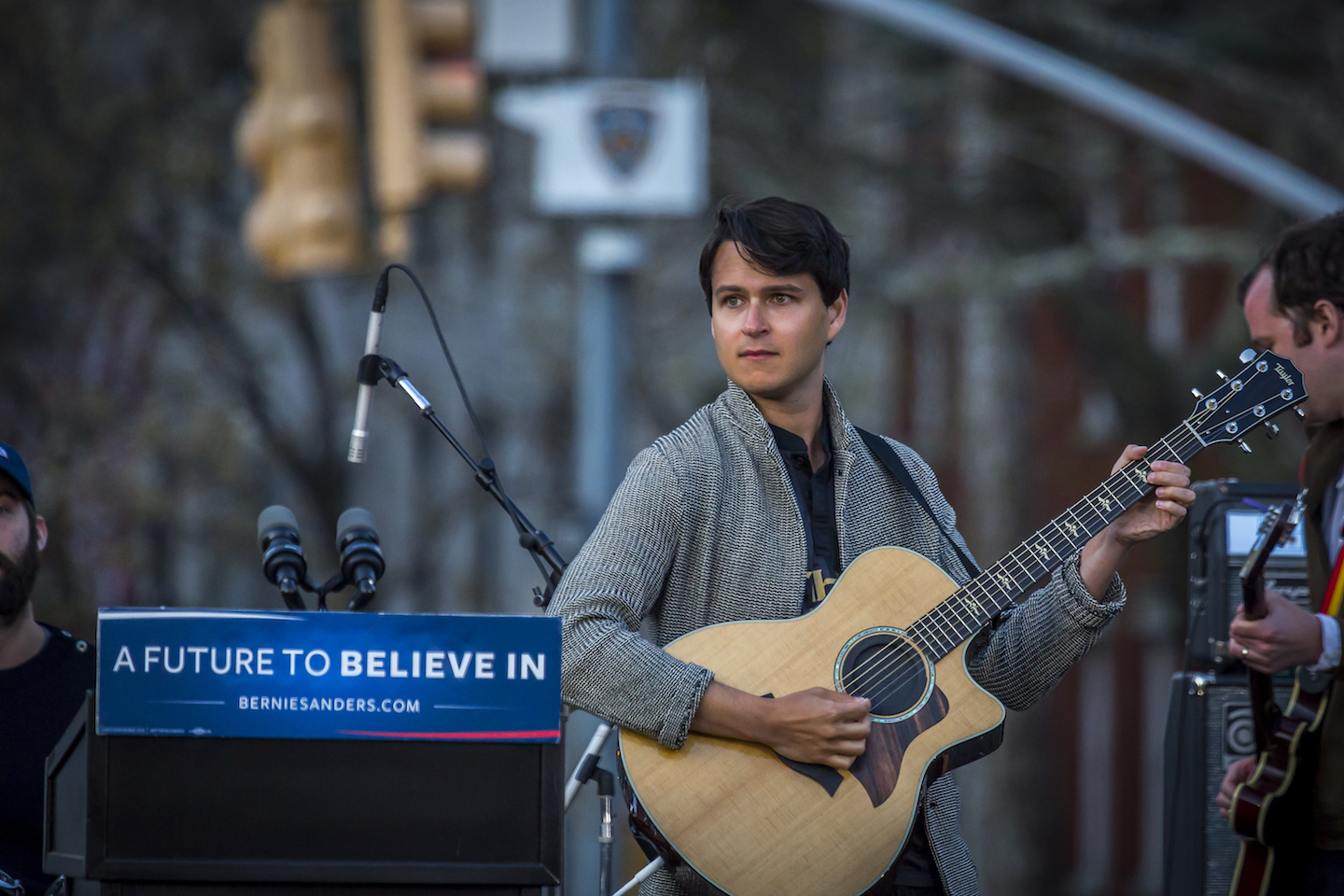 Other songs make similar stylistic leaps. “Married in a Gold Rush” is a sonically minimalist elegy for a marriage, relying mostly as it does on a duet between Haim and Koenig. “My Mistake” is essentially a piano-driven waltz. “Spring Snow” finds Koenig experimenting with the aesthetics of Auto-Tune, doing his best impression of Kanye West on 808s & Heartbreak. FOTB’s 18 well-sequenced tracks are more eclectic than anything the band has done before. It helps that the old genius—the old musical virtuosity—is there, still. The group is wiser and more interested in collaboration as well, making this the first Vampire Weekend album with features; along with Haim, Steve Lacy of the R&B group the Internet shows up. The group’s sound is decidedly more omnivorous than it was on previous albums, and it is far more assured. It’s grown. And it’s grown on me as well.

For a certain group of young and youngish people, Vampire Weekend was the soundtrack to college classes, first jobs, first loves, first heartbreaks. It soundtracked what it was like to come of age, massively indebted, during the Great Recession. This was music for the first generation of Americans who’d earn less than their parents; it was the sound of something horribly new. For me, who’s part of that crowd, each new Vampire Weekend album became a kind of emotional barometer: If the album was OK, maybe I would be, too. The first album came out in 2008, the second in 2010, the third in 2013, and now, 11 years after Vampire Weekend’s debut, we have Father of the Bride. We’ve all changed in that time. I have, at least.

Quelle Chris Upends How We Talk About Guns

It’s not a particularly astute observation to say things are very different today from a decade ago. But it bears repeating anyway because it feels as though the gulf between then and now is widening faster than ever. Political climates around the world are destabilizing, the Internet has become inescapable and increasingly hungry for personal data, and global warming is forcing us to reckon with what we’ve done to the planet.

Koenig and his band haven’t really had anything to do with those changes. (Though it’s absolutely worth noting here that he’s a progressive and a supporter of Bernie Sanders.) But Father of the Bride can be read as a response to a changed world. The relationships it details are atomized and oblique, its lyrical tone is bleak and introspective, and the guitars are still cheerful. I don’t know if there’s a better way to define the sound of 2019; it’s the sonic equivalent of gallows humor. Even so, Koenig is hopeful at the end of it all. “So let them win the battle / But don’t let them restart / That genocidal feeling / That beats in every heart,” he sings in “Jerusalem, New York, Berlin,” FOTB’s closing song. Hope, he thinks, is a moral imperative. And that’s the grown-up answer.