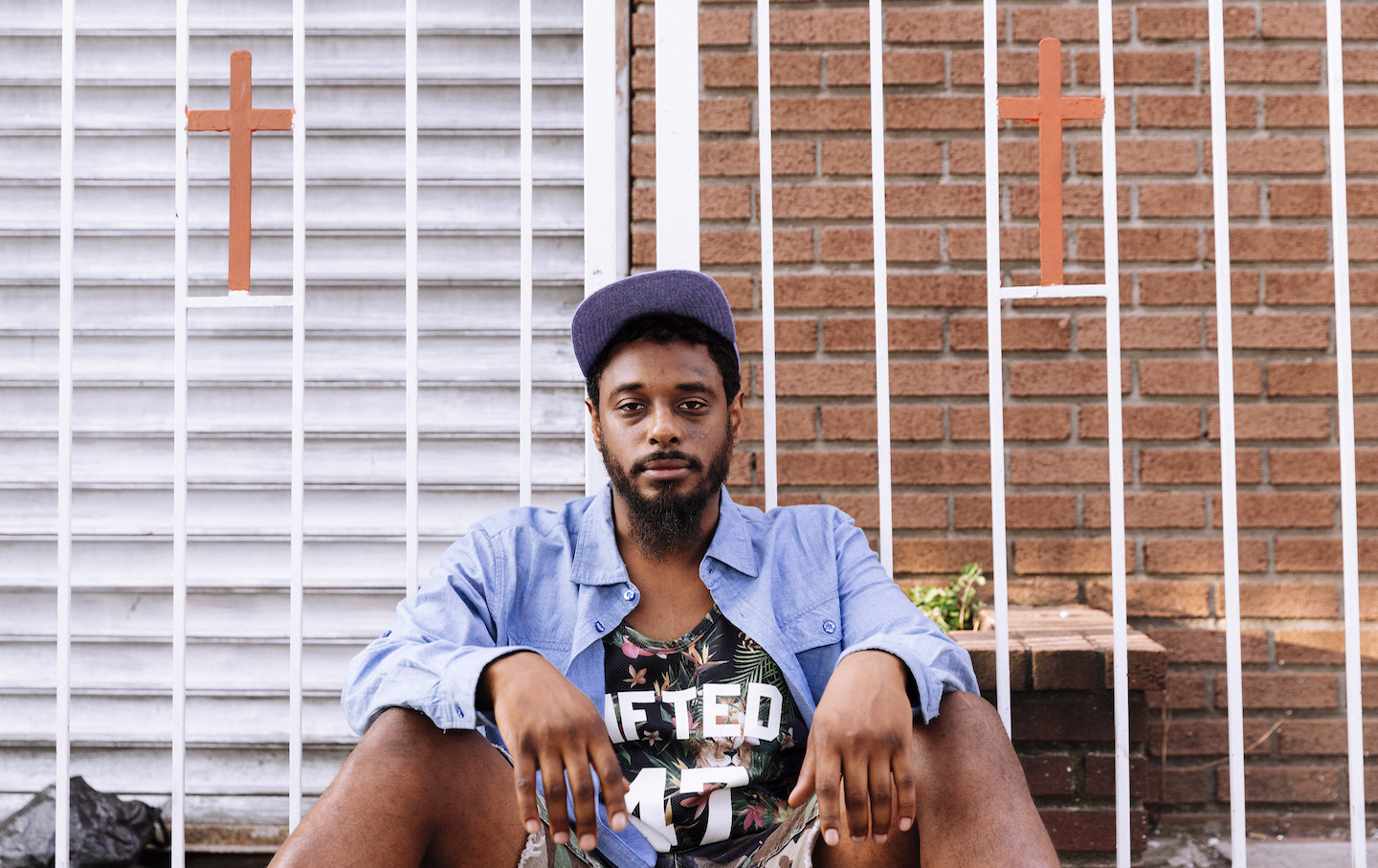 When fictional Detroiter Cheddar Bob shot himself in the movie 8 Mile, I felt that. He was stuffing his mom’s revolver into his sagging waistband, and the fit was neither snug nor familiar. He and that gun had no relationship, no history. On his new album, Guns, real-life Detroiter Quelle Chris explores the intimacy between guns, their wielders, and their victims in subtle, dazzling detail. The record is prickly, sardonic, and strangely warm. Quelle understands guns as weapons, accessories, symbols, and everything in between without ever letting that plurality cloud his perspective. He surveys them with such breadth because he knows exactly how dangerous they are.

A miasma of violence hovers over the record, but Quelle never chokes. Like a pedestrian strolling down a dangerous yet familiar street, he makes passing observations about guns with a studied cool. From his perch, America’s relationship to the weapon is deeply uncertain. “I be in your city / Coming to a city near you / In your city / Coming to ya city,” Quelle sings in a dry deadpan on the title track. The “I” here is profoundly ambiguous; he could be speaking from the perspective of a gun merchant, a hit man, or the firearm itself. His message is far from cryptic, though. While guns and their baggage may bring order or mayhem, protection or danger, Quelle refuses to ascribe a particular meaning to their arrival—and thereby highlights how that ambiguity itself is threatening.

He digs deeper into that creeping sense of uncertainty on “Color of the Day,” a brief and cheeky ditty about the fraught experience of being black. A rotating ensemble of voices delivers the song’s only lyrics—“Walking while black / Shopping while black / Swimming while black / Driving while black”—as if building to some violent climax. Instead, the song ends abruptly with the tension still hanging in the air, mirroring how the threat of violence can be more menacing than violent acts themselves. Through its emphasis on blackness, the song also makes clear how guns come to be so quotidian: If danger lurks around every corner and guns offer some semblance of peace, it follows that they would end up accompanying people to all the places they feel insecure, even unusual spaces like swimming pools.

That attention to how guns serve as extensions and proxies of emotional states is the record’s strength. The smooth strut and flashy pride of “Box of Wheaties” and “Wild Minks,” both of which feature extended comic interludes by the filmmaker Shaka King, make guns feel luxurious and sexy, like tailored clothing. As Quelle and guest artists Mach Hommy and Denmark Vessey swagger about, enamored with their own swank, they tease out a dark excitement. “What’s perfection when life’s interesting on the brink?” Quelle ponders, the readymade power of his weapon tipping him toward darkness. He recognizes the way guns appeal as both tools and commodities, the way people turn to them to fulfill needs and desires alike.

When handled without that nuance, guns tend to become vessels into which anything can be loaded, a tendency Quelle mocks on the satirical “It’s the Law” and mourns on the doleful “Sunday Mass,” which name-checks recent mass shootings like those at the Pulse nightclub and the Emanuel AME church. On these songs, Quelle’s clarity and nuance with respect to guns is shown to be comprehensive yet steadfast. You can feel his resoluteness about the danger of guns in the hazy and funereal compositions, which are shot through with minor keys, glitchy effects, and murky loops, as well as his constant attention to scale. The ways in which black bravado and white supremacy get amplified by guns strike him as unequivocally harmful. “Monkeys who gang bang chained to the street / Honkeys with gang brain armed to the teeth,” he raps crudely.

On his 2011 album Shotgun & Sleek Rifle, Quelle invoked the titular weapons in reference to Huey Newton’s iconic photo in the wicker chair, an image of defiance and menace. Guns exchanges iconography for a panorama of everyday life and is accordingly more poignant. “You, Me, & Nobody Else,” a gospel-tinged ode to Quelle’s partner, fellow rapper and producer Jean Grae, embodies this shift. “Told me you loved me and right then my whole life changed,” he reflects, his relief standing in stark contrast to the tension that colors the rest of the record. People use guns to protect themselves and to fill their voids, and they store them in closets, under mattresses, and in waistbands—but this peace is the kind of solace that a gun could never bring, no matter how closely it’s held.