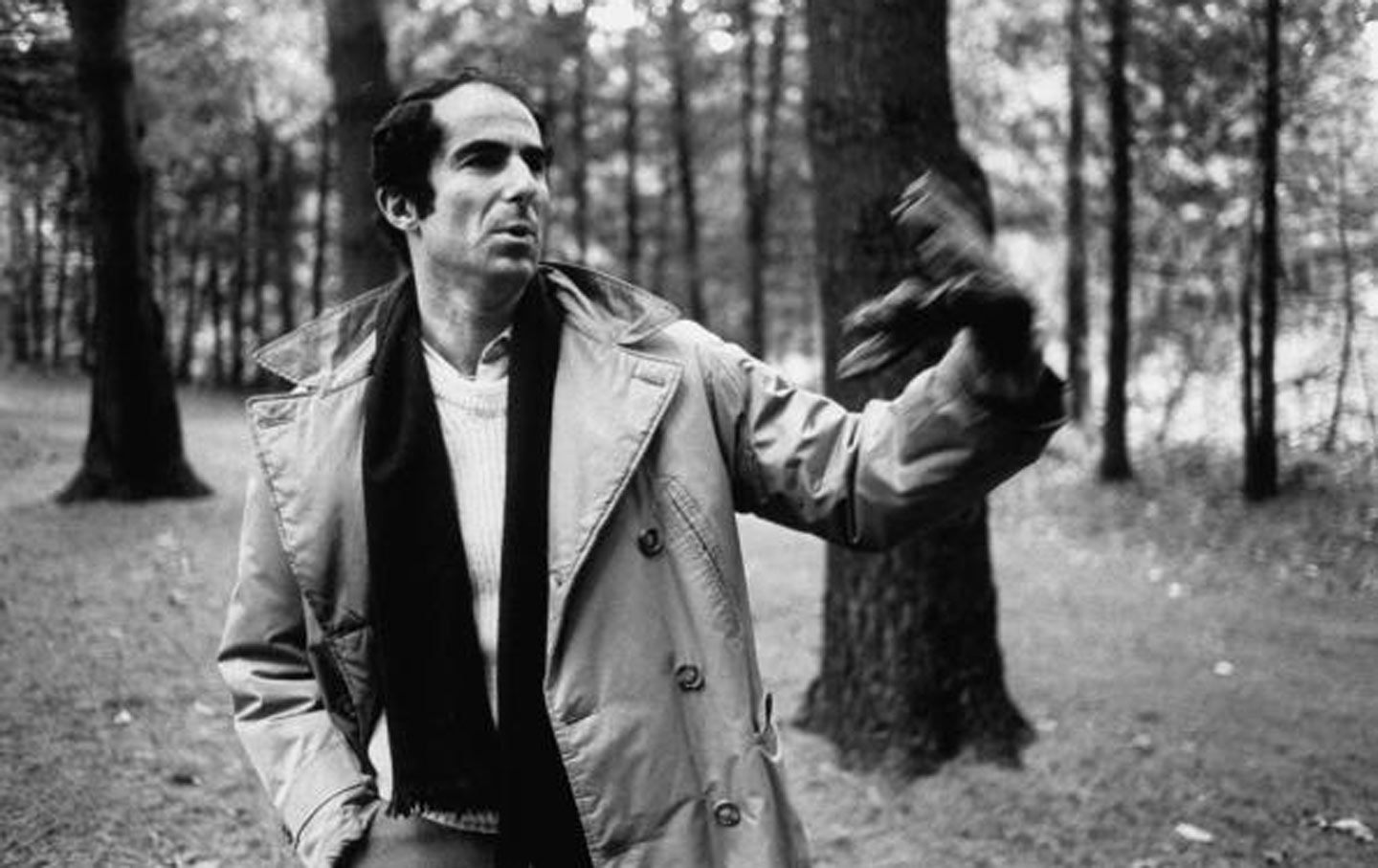 In a moment when many writers struggled to lay claim to one career, Philip Roth had three or four. After publishing the irreverent story collection Goodbye, Columbus, the early Roth wrote two mannered novels set in the Midwest, remarkable less for how they were composed than—at least in the case of Letting Go—for how they portrayed a lost generation still coming into its own. But then the 1960s hit and starting with his 1969 Portnoy’s Complaint, we got to know another Roth: Roth II’s writing was colloquial, angry, ribald, often antic, and exhaustingly self-obsessed. His titular character, Alex Portnoy, a “Raskolnikov of jerking off,” is a self-destructive analysand cynically exploiting the era’s spirit of sexual liberation for his interests alone. (“Socialism exists,” Portnoy thinks when with one partner, “but so too do spirochetes, my love!”) With him also came a new style, a simultaneously compelling and offensive voice—one part Lionel Trilling, another Lenny Bruce—that slighted nearly all interested parties: American Jews, the last of the New York intellectuals (Irving Howe observed that the “cruelest thing one can do with Portnoy’s Complaint is read it twice”), and second-wave feminists, who rightly found in Portnoy a prime example of the era’s still-standing patriarchy.

Roth’s own complaint was that many of his critics confused Portnoy of Portnoy’s with the real-life Roth—and out of this confusion we got Roth’s most long-lived character: Nathan Zuckerman, author of the best-selling Carnovsky, who between dodging street-side denunciations plots against a Howe-like literary critic and militant of “grown-upism” by the name of Milton Appel. With Zuckerman, Roth II also began to play a game: In a series of loosely autobiographical novels—The Ghost Writer, Zuckerman Unbound, The Anatomy Lesson, The Prague Orgy—a doubling of sorts began to take place between Zuckerman and Roth, Carnovsky and Portnoy. As the series goes on, Zuckerman, who is not Roth, begins to resemble Carnovsky, who is not Portnoy. When Nathan Z. beats a fast retreat upstate to visit an elderly writer friend, he reads Henry James and masturbates in the writer’s study. When he travels to Prague in the wake of the 1968 crackdown, he spends his first night taking in the city’s “light entertainment,” including some exposed genitalia. Over and over again, we’re told Zuckerman, who isn’t Roth, isn’t Carnovsky, who isn’t Portnoy. But in the end who knows?

By the late 1980s, Roth II (and, one must admit, Roth II’s readers) began to tire of the trick, and Roth III came onto the scene. Still laced with libidinal anxiety, the third Roth made high art out of the second Roth’s vices: His novels were more carefully crafted, his prose much closer to the chest, his narratives more intricate and architecturally sound. Sabbath’s Theater featured a Portnoy-like puppeteer who simplifies life, the “way a monk devotes himself to God,” around sex; he’s revolting in more ways than one, and the very symbol of how sexual liberation can end up doing a lot more for men than women, if men continue to dominate nearly all other spheres of life. But with Roth III we also got a series of generative experiments in form. In The Counterlife, Zuckerman returns, though in a book very unlike Roth’s earlier ones: The novel attempts to follow the many possible paths of a life can take. In Operation Shylock, we are introduced to a succession of compelling pretenders: a fictional Roth set to reclaim his identity from an impostor Roth who is set to reclaim Jewish identity from the state of Israel. Roth was back at his old game. But this time, the writing was less defensive and inward-turned, less Raskolnikov with a pen and more at the behest of Roth’s earnest desire to make better sense of the world.

Roth III—or perhaps we’re now onto Roth IV?—also began to write about the real Philip Roth and to turn to the past, first in a memoir of his early years as a writer, then in a moving and often overlooked study about his and his father’s relationship, and finally in a series of historical novels that took on the major events of the last two-thirds of the 20th century: World War II, the 1944 polio epidemic, McCarthyism, the Korean War, the 1960s, the Clinton and Bush presidencies. In many of these novels, Zuckerman is back, but now mostly offstage, a peripheral figure opening and closing the narratives but uninvolved in their main action.

Richly conceived and often narrated with a lighter touch, these novels embraced the voice of Roth’s father—“unpoetic and expressive and point-blank.” At their weakest, some of the later historical novels felt, at least to this reader, a bit more didactic than illustrative, motivated more by Roth’s desire to instruct us about the lessons from his past. But they could also be compellingly rich in their reach, bringing Roth’s cloistered neurotics out into the fresh air and pairing their personal traumas with public tragedy. “People think of history in the long term,” Roth explained in American Pastoral, “but history, in fact, is a very sudden thing.”

To each his Roth. But what to make of this massive corpus—31 books in all—as a whole? Some through lines are clear: the linguistic acrobatics and stand-up riffs; the searching inquiry into what modern Jewish identity means in an increasingly multicultural world; the rampant misogyny of his characters—“lava pouring forth from a volcano,” as Vivian Gornick wrote. But there is still another thread that one can pull from one end of Roth’s body of work to the other, and that so often goes unmined: Roth’s moralism.

Most satirists are moralists in a way—Mary McCarthy is a great example—and Roth, too, was always making, as well as scoring, a point. He did not just want to offend but to offend those in power. Roth’s truth to power was always his truth, and the power he spoke to changed over the years. In several of his stories in Goodbye, Columbus, it was the parochial American Jewish establishment of the postwar years; in the Zuckerman series, it was those establishment naysayers—reviewers and rabbis—who warned him not to betray his community. For a brief moment in the early 1970s, it was Nixon, whom he satirized as “Trick E. Dixon” in a literary caricature that led Nixon to shout to his chief of staff, H.R. Haldeman, “Who is responsible?” But Roth’s relentless desire to tell the “hard truth,” as he put it in The Counterlife, gave his diverse body of work much of its shape and foundation. “Is this truth I’m delivering up,” Portnoy asks,“or is it just plain kvetching? Or is kvetching for people like me a form of truth?”

Roth failed to speak truth to patriarchal power, and he often took an evasive and defensive posture when asked about the way he represented women in his novels. But the blunt honesty of his narratives did its own truth-telling: Portnoy, Sabbath, David Kepesh, Zuckerman all reveal the persistent inequalities of power, gender, and sexuality in American society, whether Roth intended them to or not.

No moralist—even the most fastidious, and Roth wasn’t that—can escape hypocrisy, and Roth’s desire to liberate many of his characters from the burdens of established power and opinion only went so far. Still not many other American novelists in the second half of the 20th century invested as much energy toward excavating the dark and morally ambiguous recesses of the modern self: He put us all on the couch. “Updike and Bellow hold their flashlights out into the world, reveal the world as it is now,” Roth noted. “I dig a hole and shine my flashlight into the hole.”

In the darkest and dimmest of holes that he dug, Roth still found a way to wield this flashlight. Early in Portnoy’s Complaint, our “Raskolnikov of jerking off” confesses, “I sense some enigma at its center, a profound moral truth, which if only I could grasp, might save me.” In The Prague Orgy, Roth puts a pause on the novel’s carnal activities to let one of Zuckerman’s new acquaintances movingly reflect on her country’s plight: “All these people, they suffer for their ideas and for their banned books…they suffer for…their humanity.” Even Mickey Sabbath, “destroyer of morals,” is not immune to Roth’s reproach. With Sabbath standing in wait for his inflamed prostate to kick into gear, Roth writes:

What has happened to his entire conception of life? It had cost him dearly to clear a space where he could exist in the world as antagonistically as he liked. Where was the contempt with which he had overridden their hatred; where were the laws, the code of conduct, by which he had labored to be free from their stupidly harmonious expectations? Yes, the strictures that had inspired his buffoonery were taking their vengeance at last.

In light of the past month, one might add that on Israel and Palestine Roth cast his handheld light as bright as he could: first in The Counterlife, when we follow Zuckerman to a West Bank settlement where his brother has moved, and then in Operation Shylock, when Roth inserts his fictional persona into Israel during the first intifada and the trial of John Demjanjuk. Drawn to Jerusalem by news of an impostor Roth traveling the country to gain support for a “Diasporist” movement, he eventually finds himself ensnared in an intrigue orchestrated by the Mossad and forced to resolve where his loyalties lie—with Israel or with the diaspora, with Jews or with himself. Here we find an intriguing web that reveals the artifice behind all identities and cultural claims, but especially the elevated “authenticity” American Jews give to Israeli identity: Real Philip is forced to reclaim his identity from impostor Philip, who is trying to reclaim the Jewish diaspora’s identity from Israel. As the novel comes to a close, and real Philip has an affair with impostor Philip’s girlfriend, we begin to realize we are not at all clear who is the hero of this struggle. The most compelling voice in the novel, in fact, belongs to neither Philip but to a Palestinian named George Ziad, who spends nearly all of the narrative in search of a way back home.

Roth’s characters never really were at home; neither was Roth. One suspects this was part of the point: Roth wanted to remind us that none of us really could be at home in the contemporary world, as Jews, as Americans, as moderns, as humans. Roth, for this reason, always took a distanced stance: His moralism was that of the permanent exile; his truth led him to remain outside the city gates. One can fault a moralist for this distance; morality, after all, requires more than just a critical self. But in figures like Ziad, we find another Roth, still holding out hope that there’s a way home.