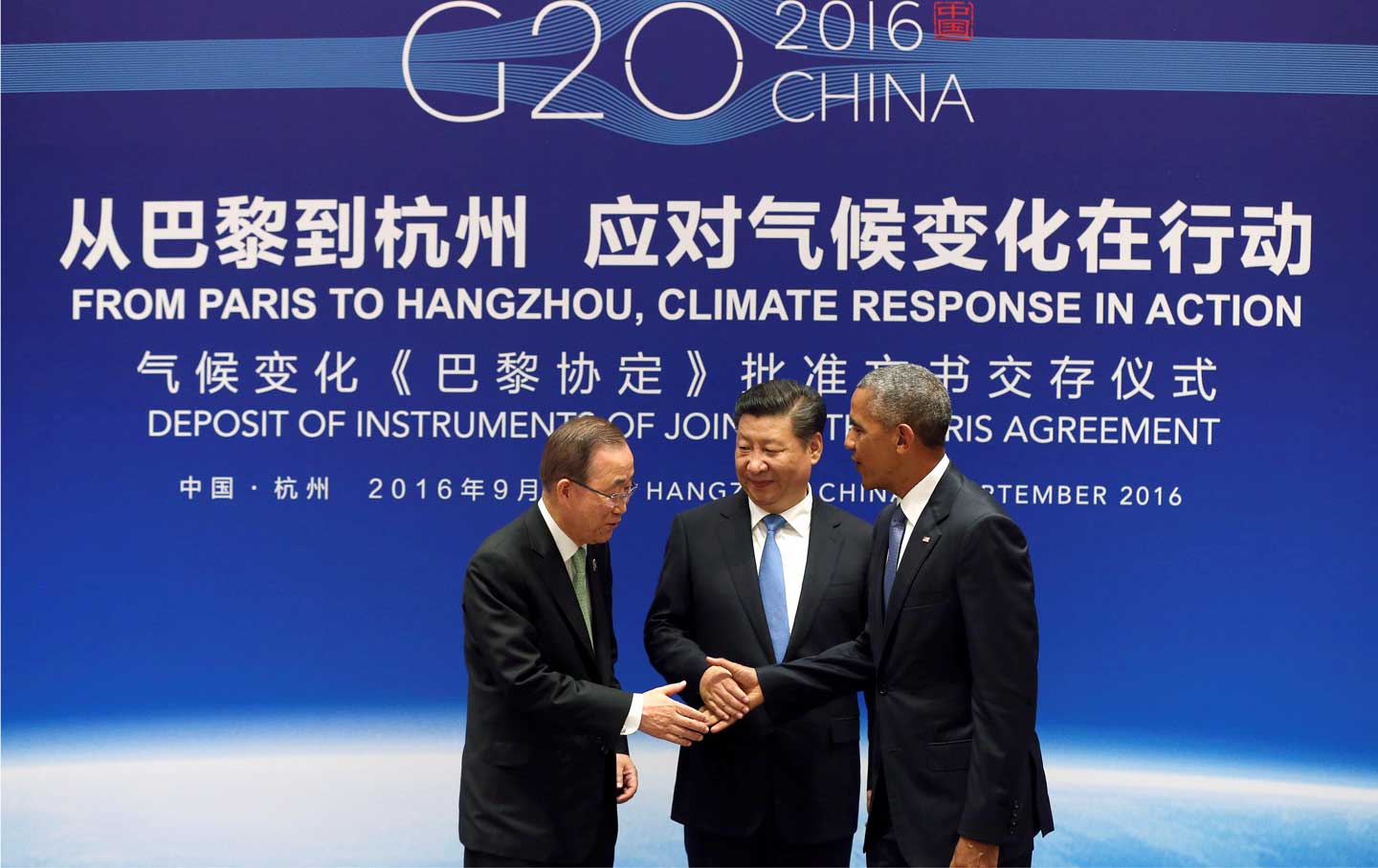 Editor’s Note: For much of the past two decades, and certainly since the invasion of Iraq in 2003, progressive foreign policy has been defined by what it is against—primarily, an aggressive neoconservatism that has led us into multiple wars in the Middle East and has sacrificed important domestic goals in favor of a global crusade for American dominance. But it is much less clear what a progressive foreign policy stands for, and what it would look like in practice. It is especially important to try to define one now, after the election of Donald Trump.1

Progressives would be wise to avoid two tendencies on this issue. The first is defining a progressive foreign policy as simply a rejection of whatever Trump says or does. Of course, he has already appointed some dangerous extremists to important foreign-policy positions, and Trump himself is erratic at best, seemingly incapable of focusing in a sustained way on difficult foreign-policy problems. But some of his statements— his calls to work with Russia, end America’s destructive wars, and create more equitable trade agreements—are not so far removed from ones that we ourselves have embraced. We will need to champion our own progressive version of these positions rather than simply reject them outright.2

The second tendency we should avoid is falling into nostalgia for the Obama era. Of course, we should defend the administration’s notable achievements in beginning the normalization of relations with Cuba and helping to engineer a nuclear agreement with Iran. We can also laud the intent behind some of the president’s wonderfully crafted speeches that were meant to repair America’s image in the world. But we must also remember the shortcomings of Obama’s foreign policy: his perpetuation of the “Global War on Terror” (albeit without the Bush-era name), including an undeclared drone war stretching from the Maghreb to South Asia, and an unnecessary but dangerous new Cold War with Russia. And while this magazine endorsed Hillary Clinton against Trump in the general election, we actively opposed many of the so-called “liberal interventionist” policies that she favored.3

For all the democratic promise of the movement that Senator Bernie Sanders inspired, he didn’t leave us with a series of foreign-policy proposals to guide our thinking for the future. That’s the unfinished business we take up in this forum. We asked six leading progressive thinkers to offer their thoughts on what the defining ideas and principles of a progressive foreign policy should be as we look beyond the 2016 election (see “Related Articles” for the companion pieces). It’s the beginning of a discussion that our nation must have, but not, by any means, the end.1

The 2016 election and its terrifying aftermath have pulled millions of Americans into a maelstrom of racism, xenophobia, anti-immigrant hysteria, and Islamophobia, which simultaneously reflects and prepares the ground for an even more militarized, private-profit-driven, anti-Muslim, and anti-immigrant foreign policy. We don’t yet know whether Donald Trump’s foreign policy will reflect his earlier dalliance with isolationism or move closer to the rabid military interventionism favored by so many of his chosen generals. Even without knowing, though, we should identify what a new, non-imperial, truly internationalist foreign policy would look like—one in which international law, human rights, and global solidarity replace the “Global War on Terror.” That starts with cutting military budgets and ending the wars, occupations, and climate injustices that are generating the world’s many refugee crises.2

A new US foreign policy must be broad in its vision and scope, and it must acknowledge that war cannot defeat terrorism. Despite some good intentions and powerful speeches, and despite renaming the “Global War on Terror,” President Obama was unable to break from it; in fact, he ended up significantly expanding its reach, with the use of US Special Forces and bombing campaigns increasing in Syria, Libya, Yemen, and elsewhere, along with Iraq and Afghanistan. Further escalation of that policy by a Trump administration would only result in the escalation of failure.3

A progressive foreign policy means ending the economic as well as the political privileging of military profiteers. It means lifting up diplomacy over war, while rejecting isolationism and recognizing the obligations that come with being the wealthiest and most powerful nation in history.4

The United States owes a global debt of support to people and countries around the world. It’s a debt that should be repaid by the slashing of our multibillion-dollar military budget. Those billions—still about 54 cents out of every discretionary tax dollar in the federal budget—should be redirected to urgent domestic priorities: jobs, education, environmental protection, health care, and more, while leaving plenty to increase nonmilitary assistance to peoples and nations around the world. This is particularly important for countries whose economies and social fabrics have been devastated by US wars and sanctions. Among other things, our new foreign policy would vastly increase humanitarian support for refugees and others displaced by wars and climate crises.5

Obama renamed the “Global War on Terror” but he didn’t break from it; in fact, he expanded its reach.

With that shift away from military spending, we can envision a foreign policy that privileges diplomacy over war. It should start with protecting President Obama’s diplomatic successes: the nuclear deal with Iran, the normalization of relations with Cuba, and the Paris climate accord. All are central to Obama’s legacy, but all are threatened by Trump and the Republican-controlled Congress.6

Similar high-profile and high-investment campaigns for diplomacy instead of war and militarism should be launched regarding Syria and the broader Middle East, reflecting President Obama’s oft-repeated (but often ignored) recognition that “there is no military solution.” This should start by withdrawing US military forces and stopping air strikes. It should be followed by serious engagement with other global and regional powers—first of all Russia—to end the Syrian war. The United States and Russia need to support a permanent cease-fire and pressure their respective allies—Saudi Arabia, Turkey, Jordan, Qatar, the United Arab Emirates, and the armed Syrian opposition on the one hand; and the Syrian and Iranian governments and Hezbollah on the other—to agree to a full arms embargo on all sides. Preventing our regional proxies from sending US arms to Syria (and stopping the Saudi war against Yemen) would strengthen Washington’s ability to persuade Russia to match this de-escalation.7

In Israel/Palestine, a new justice-based foreign policy would mean acknowledging that the US-orchestrated “peace process,” based on a two-state solution and dragging on for nearly a quarter-century, has been a resounding failure. The increasing strength of the Palestinian-rights movement in the United States—and the resulting shift in popular American discourse on this central issue—provides an unprecedented opportunity for political leaders to recast US policy so that it matches public opinion. Policy-makers could turn over control of diplomacy on this issue to the UN General Assembly and end Washington’s support for Israeli apartheid and occupation, backing instead a policy based on international law, human rights, and equality for all, without privileging Jews or discriminating against non-Jews.8

So far, Trump’s foreign policy is largely opaque. But our own progressive foreign policy remains clear: It is one based on justice, internationalism, and human rights. No election can change that.

Correction: In the list of US and Russian allies in the Syrian civil war, an editorial mistake omitted one of Moscow’s allies: the Syrian government. The text has been updated. Apologies to the author. 9