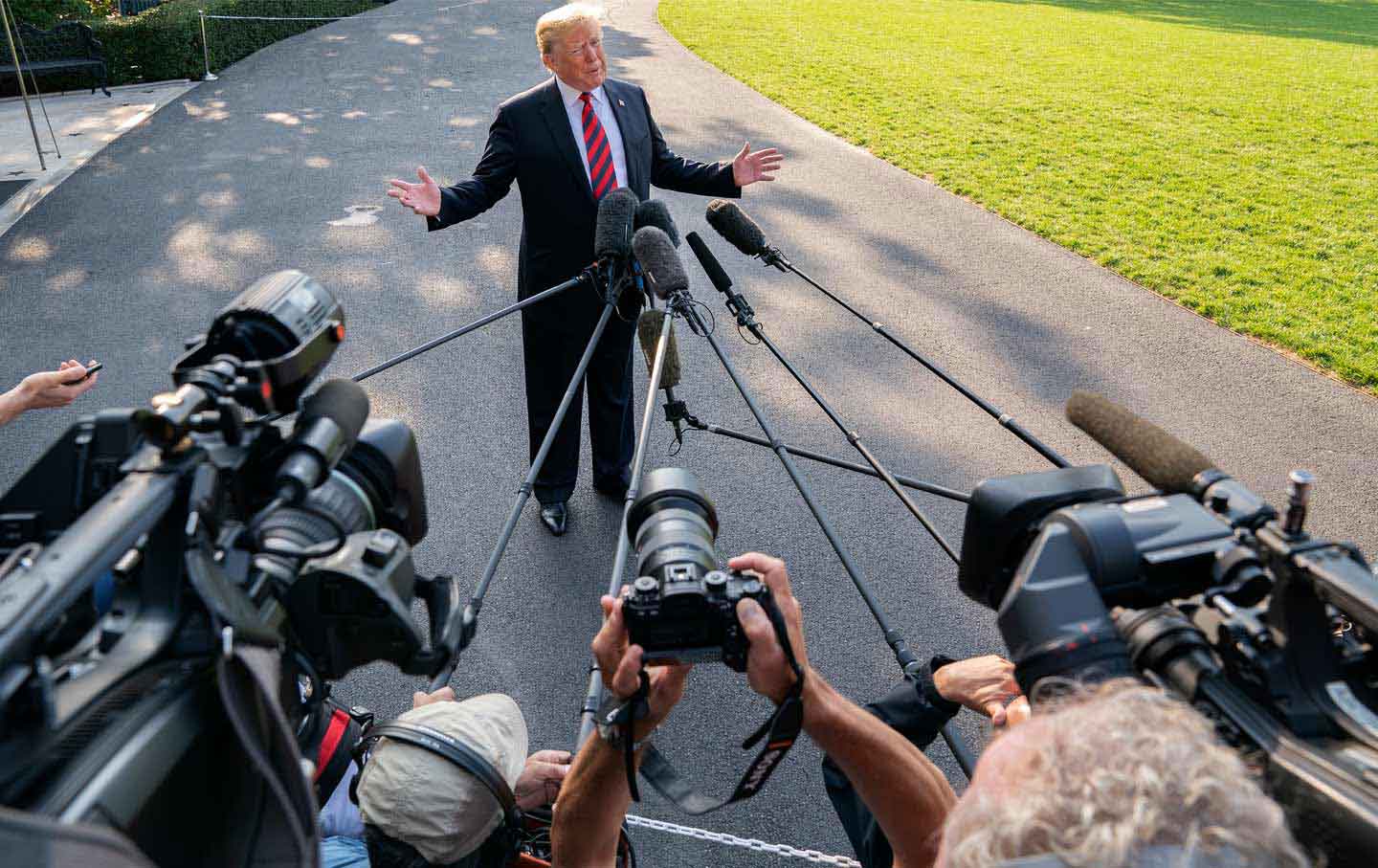 Donald Trump’s election stunned the national-security establishment, which the precocious Ben Rhodes, Obama’s deputy national-security adviser, once dubbed “the Blob.” In his campaign speeches, Trump mocked its “stupid” wars and “lousy” deals on trade, Iran, and the environment. He scorned it in his inaugural address: “The establishment protected itself, but not the citizens of our country. Their victories have not been your victories.” His trumpeting of an “America First” policy, with its disgraced isolationist provenance, offended the Blob’s core beliefs.

Not surprisingly, the mandarins sounded the alarm. Rhodes even organized charter members of the Blob into National Security Action, an advocacy group designed to challenge Trump’s heresies. Opposing Trump, however, is cheap grace. The real question is what lessons the establishment has drawn from his rise. Is Trump a grotesque aberration, an accidental interloper whose removal—by impeachment or electoral defeat—will allow a return to normalcy? Or does his victory constitute a wake-up call, one that demands a fundamental reworking of US national-security policy?

Trump in the Back Alleys

American national-security policy over the last several decades can be viewed as having what the historian Alfred McCoy euphemistically described as a “delicate duality.” It has featured the creation of global institutions and a “rules-based” commercial system, represented by the United Nations, the World Trade Organization, the International Monetary Fund, and the World Health Organization, among others. At the same time, the US has waged hard-knuckled, back-alley brawls involving constant interventions in other nations’ affairs: brutal proxy wars, the lawless toppling of governments, routine election interference, ruthless economic pressure, and more.

Trump, despite his rhetoric, is far from an America First isolationist. He has doubled down on the interventionist side of US foreign policy, escalating the “stupid” wars in Afghanistan and Syria, arming Ukraine, threatening to unleash “fire and fury” on North Korea, increasing the use of drone strikes, adding to the bloated military budget, and dropping more bombs on more people in more countries than before.

These early betrayals of his campaign promises were met with approval from much of the national-security establishment. Richard Haass, president of the Council on Foreign Relations, joined the widespread applause for Trump’s “quick, limited air strike” on Syria, and virtually the entire Blob supported giving more money to the military. Leading Trump critics were gleeful that his stated desire to improve relations with Russia was thwarted, with many backing the decision to ship arms to Ukraine. Trump has ended up, as the neoconservative doyen Eliot Cohen wrote with relief, “a highly erratic, obnoxious version of the Republican normal.”

Now McMaster and Cohn are gone, Kelly has lost his clout, and Trump has assembled a war cabinet of überhawks, led by new National Security Adviser John Bolton. Trump has walked out of the Iran deal, moved the US embassy in Israel to Jerusalem, and threatened tariffs on allies and adversaries alike. The fear is that he could stumble into wars with Iran, Russia, and even North Korea should Trump turn on Kim Jong-un after the glow of the Singapore summit dissipates.

Trump and the Populist Revolt

Establishment authors warn repeatedly about the dangers that Trump and the populist wave here and abroad pose to the “rules-based global order” that the United States has built and led over the last decades. Trump’s trade bluster—the tariffs, the schizophrenic dealings with China, the withdrawal from the Trans-Pacific Partnership, renegotiation of NAFTA, tantrums at the G-7—is viewed as a direct threat to an order that the Blob still regards as an unprecedented success story. “A smaller share of the world’s population than ever lives in poverty,” writes Adam Posen, president of the Peterson Institute for International Economics, and the “liberal order constructed and led by the United States made such progress possible.” It is vital, Princeton University’s G. John Ikenberry writes, to “defend its institutions, bargains, and accomplishments,” beginning with “reclaiming the master narrative of the last 70 years” and its “world-historical advances.”

One part of “reclaiming the master narrative” has been a gaggle of books detailing the threat to democracy constituted by rising populist movements and by Trump in particular. In Fascism: A Warning, Madeleine Albright, the former secretary of state under President Bill Clinton and still a titular leader of the Democratic foreign-policy establishment, maintains that it could happen here, unless we rouse ourselves to defend liberal democracy. She argues that Trump’s politics of hate, constant lies, and assaults on the truth, the independent press, and our election process must be countered and condemned.

Defending democracy, however, too easily slides into a defense of the status quo ante. Albright, for example, sneers at the growing popular revolt. The problem, she says, is that we’ve become “spoiled.” “Globalization,” she argues, “is not an ideological choice but a fact of life,” and yet now has become, in the eyes of many, an “evil to be fought at all costs.” Likewise, “Capitalism is considered a four-letter word by an increasing number of people who—if not for its fruits—would be without food, shelter, clothing and smartphones.”

Albright writes these words about a rich nation with extreme inequality, 40 million people living in poverty, and declining life expectancy. Fully 43 percent of Americans cannot afford the basic necessities of life, according to a recent United Way study.

As the writer Robert Kuttner outlines in his important new book Can Democracy Survive Global Capitalism?, the embrace of market fundamentalism at home and abroad, particularly after Ronald Reagan’s election in 1980, led the US-dominated order to enforce a harsh version of corporate capitalism. The ability of governments to protect basic economic rights at home was constricted, while international corporations and banks rigged the rules to undermine workers, avoid taxes, and manipulate markets. This fix was most dramatically illustrated during the global financial crisis of 2007–09, when those who caused the crisis were bailed out, while those who were its victims were left to fend for themselves, if they could.

More sensible establishment figures understand that something major has gone awry. Writing in Foreign Affairs, Jake Sullivan, a former adviser to Hillary Clinton at the State Department and for both her 2008 and 2016 campaigns, suggests that, while reports of the international order’s demise have been “greatly exaggerated,” the system nevertheless needs an “update to account for new realities and new challenges.”

Sullivan understands that the popular discontent is rooted “in the lived experience of many who have seen few [of the] promised benefits flow to them.” This has sparked “new and urgent conversations” about how to address the “distributional consequences of globalization and automation.” The United States, Sullivan insists, is the only country with the sufficient “reach” to lead this process, despite its extreme inequality at home. But he offers no ideas for how to deal with these questions other than the imperative that Trump not be “handed another term.”

Americans Are Sick of Endless War

The limits of the establishment “conversation” are exemplified by the Council on Foreign Relations’ Haass, who suggests that the Trump administration should “tone down some of its rhetoric on trade” while launching a national initiative to increase economic security, including “educational and training programs, temporary wage support for displaced workers [unions refer to this as “burial insurance”], the repatriation of corporate profits to encourage investment at home, and infrastructure spending.” In other words, the global capitalist order needs “a renovation, not a teardown…. The strategic focus for U.S. foreign policy should be preservation and adaptation, not disruption.”

This won’t do. It will take far more than getting rid of Trump and having “urgent conversations” to make the changes necessary to revitalize democracy at home and abroad. The populist revolts building on both the right and the left are but the first stirrings of a growing demand for fundamental change.

The source of democracy’s vulnerability isn’t in this populist response, but rather in the failure of the elites. When elections produce the same results no matter which party is elected, cynicism and anger spread. For too long, the foreign-policy mandarins have reinforced a global order in which the interests of the “winners” are protected while the struggles of the “losers” are ignored. Right-wing populism, as trumpeted by a poser like Trump, can evolve into a frightening threat to democracy. Left-wing populism may be democracy’s salvation. Trump’s election was in many ways a warning to the establishment. The question is whether they heed that message. Thus far, the results are not encouraging.