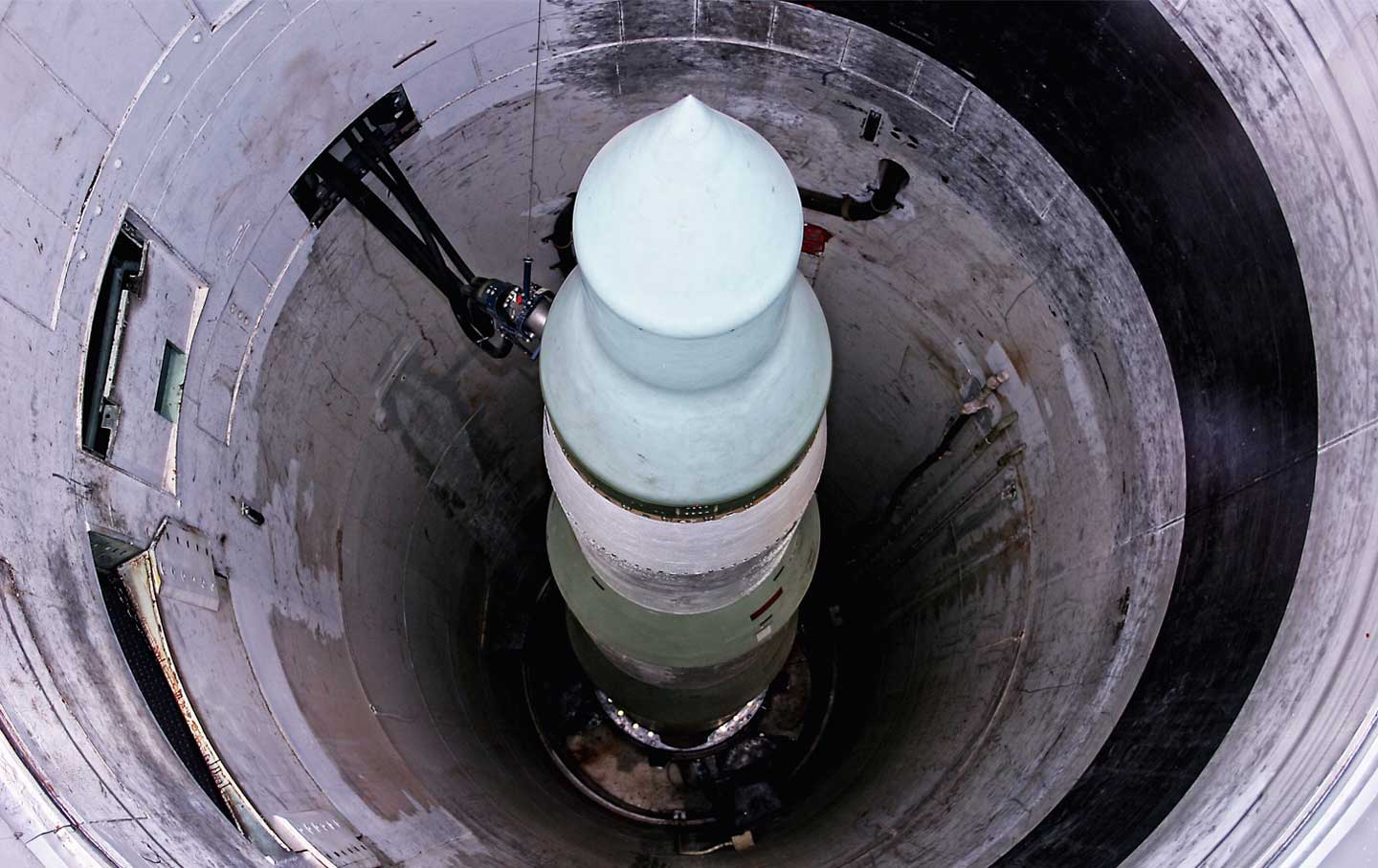 Ever since the invasion of Iraq in 2003, the peace movement has seemed moribund. But in the wake of the US–North Korean summit, there are glimmers of hope that something new is stirring, with a focus on the ultimate threat to humankind: the use of nuclear weapons.1

This new momentum has been sparked by some of the dark times of the past 17 months. In January 2018, citing growing nuclear risks and unchecked climate dangers, the Bulletin of the Atomic Scientists set its iconic Doomsday Clock 30 seconds closer to midnight, the nearest to the symbolic point of annihilation that the clock has been since 1953, at the height of the Cold War. The world seems off its axis as new political forces have rekindled old animosities between nuclear rivals. The president’s disastrous decision to withdraw from the Iran nuclear deal has led to new dangers in the Middle East. Trump’s choice of John Bolton as national-security adviser jeopardizes the prospect for enduring peace with North Korea; Bolton was one of the most rabid proponents for the invasion of Iraq and has pushed for regime change in North Korea, Iran, and Syria. Meanwhile, the nuclear-armed states are undertaking new weapons programs, and the possibility of stumbling into a calamitous war with North Korea and/or Iran has never been more real. There are nine nuclear-armed states with a combined arsenal of around 15,000 nuclear weapons. Another 59 countries possess nuclear materials and the capacity to create their own weapons programs. Even a small regional nuclear conflict could inflict catastrophic global damage. The probability of lost or stolen nuclear material, the accidental use of nuclear weapons (or terrorists acquiring them), and the threat of full-scale nuclear war all rise each time a new country decides to make weapons-grade nuclear materials.2

Last year, President Trump declared that he wanted the US nuclear arsenal to be at the “top of the pack,” asserting preposterously that the US military had fallen behind in its weapons capacity. In his 2018 State of the Union address, Trump again stated his determination to modernize the nation’s nuclear stockpile. His appointments, statements, and actions—combined with the knowledge that the president has sole launch authority for these weapons—have raised global anxieties to a level not seen in a quarter-century. Google searches for “World War III” hit an all-time high in April 2017.3

In response, movements for nuclear disarmament around the world are reviving the kind of activism that’s been missing for a very long time. Take Korea: The American media make too little of the role of South Korean President Moon Jae-in and the domestic movements that propelled him into office. Moon did not emerge from a vacuum; he was backed by numerous progressive forces in South Korea. Women Cross DMZ and other Korean women’s groups were part of that electoral muscle. In 2015, on the 70th anniversary of Korea’s division by the Cold War powers, Women Cross DMZ led 30 female peacemakers from 15 countries, including two Nobel Peace Prize laureates and the American feminist Gloria Steinem, across the Korean Demilitarized Zone. They held peace symposiums in Pyongyang and in Seoul, where hundreds of women discussed the impact of the unresolved Korean conflict on their lives and shared stories of mobilizing in their communities to end violence and war. They walked with 10,000 women on both sides of the DMZ, in the streets of Pyongyang, Kaesong, and Paju, calling for a formal peace treaty to end the Korean War, the reuniting of separated families, and a central role for women’s leadership in the peace process. Women are still pushing with meetings, marches, and political engagement across the Korean Peninsula. Moon’s election was partly a mandate to move forward with a new relationship with North Korea.4

Peace movements in the non-nuclear states are on the rise too. In December 2017, the International Campaign to Abolish Nuclear Weapons was awarded a Nobel Peace Prize for its efforts to advance a treaty on the prohibition of nuclear arms. In all, 122 countries have voted in favor of adopting the treaty thus far, and many are on the path to full ratification. On May 17, Vietnam became the 10th nation to ratify it; the treaty requires the ratification of 50 countries before it acquires legal standing. No nuclear state has expressed support for it yet, but the treaty stands as a moral document and is galvanizing peace movements in many countries.5

Meanwhile, peace activists are taking a page from the fossil-fuel divestment movement. Don’t Bank on the Bomb identifies corporations that produce key components for nuclear weapons and presses major institutions to divest from them. The Dutch pension fund ABP, the fifth-largest in the world, announced in January that it would divest from all nuclear-weapons producers. Twenty-two major global institutions have already done just that.6

Back home in the United States, Beyond the Bomb is a new effort focused on grassroots advocacy to reduce the threat of nuclear conflict. To date, the campaign involves Win Without War and Women’s Action for New Directions, but it aims to enlist a much broader network of groups. The primary focus is to pass emergency legislation that will curtail the president’s sole authority to use nuclear weapons. Few things are more terrifying than Donald Trump’s continual proximity to the so-called nuclear football—a briefcase with codes for launching nuclear missiles. When Trump threatened to rain “fire and fury like the world has never seen” on North Korea, Beyond the Bomb gained momentum. The campaign is also working with others to block the United States’ proposed $1.7 trillion nuclear-weapons modernization program, and to support the adoption of no-first-use declarations as well as increased funding to clean up nuclear contamination in frontline communities.7

Climate Change Is Our Most Critical National-Security Challenge

Americans Are Sick of Endless War

The current global dynamics of fear, dysfunctional governments, and capitalism run amok are helping to drive the nuclear-arms race. But long-standing groups like Nuclear Watch New Mexico and Tri-Valley Cares, located near nuclear labs and production facilities, are mobilizing with a new intensity against the restarting of industrial-scale plutonium-pit manufacturing. On May 8, the Rev. Dr. William J. Barber II, co-chair of the Poor People’s Campaign, gave a groundbreaking speech in Washington, DC, that was reminiscent of Martin Luther King’s 1967 anti-war speech at Riverside Church in New York City. Barber invoked the moral necessity to resist militarism, the war economy, and nuclear weapons. Iraq Veterans Against the War is speaking forcefully against Trump’s abandonment of the Iran nuclear deal, while Veterans for Peace has condemned the continuing US occupation of Afghanistan and Iraq. Young progressives are linking their concerns about the violence directed against women, immigrants, indigenous communities, and African Americans with their outrage over gun violence, ecological destruction, and US militarism. John Qua, senior campaigner for Beyond the Bomb, observes that “many young people see a seamless connection among these movements,” including the need to address the ultimate form of violence—the use of nuclear weapons. Meanwhile, many older Americans perceive a unifying theme here: the need to press for and protect a safe future for our children. Together, this incipient network of old and young alike is beginning to challenge government policies that have left us stranded for too long on the brink of nuclear conflict.8