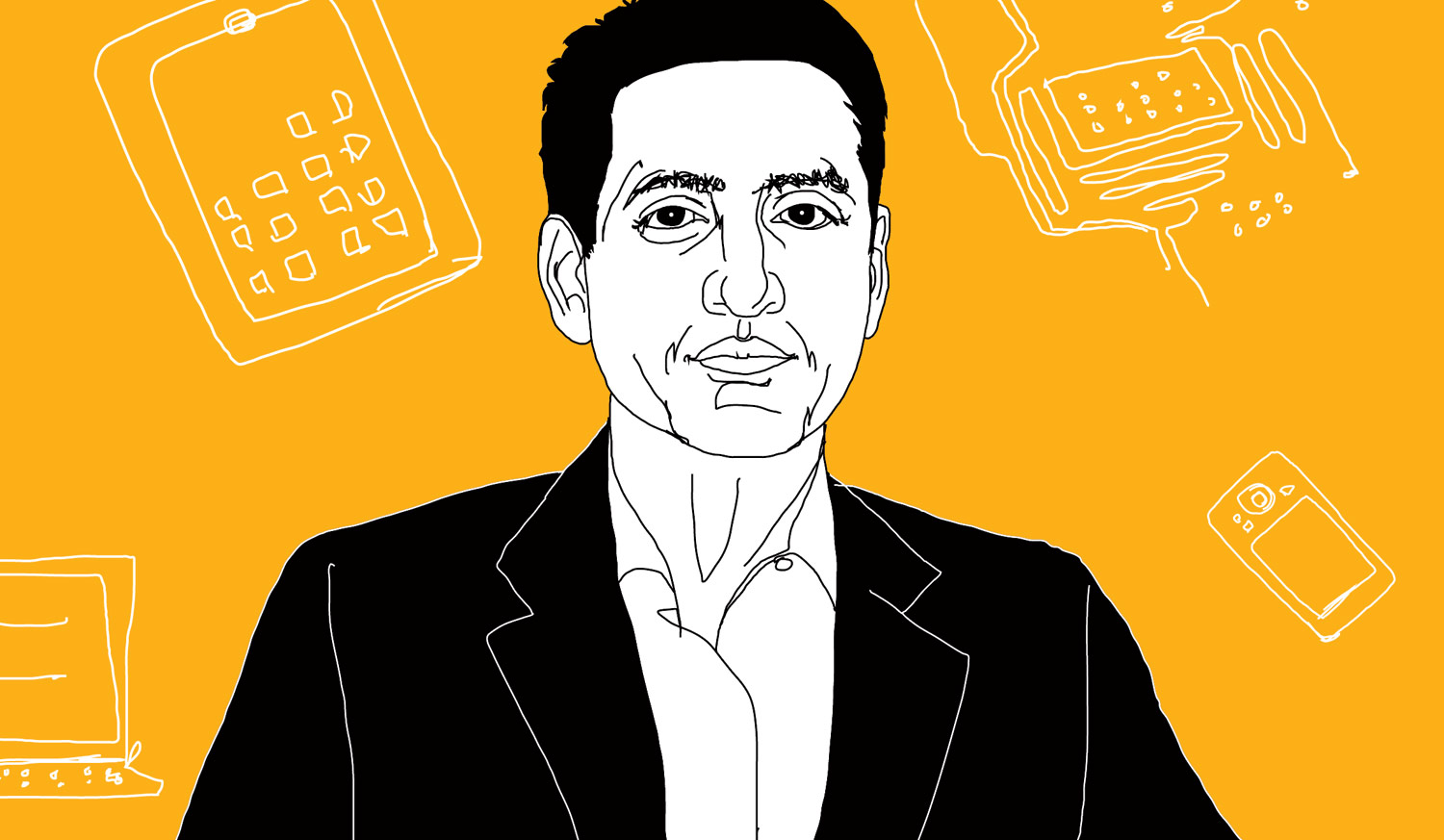 The ascendant technology industry has become an economic behemoth, but its recent forays into politics have proceeded only by fits and starts. Perhaps the most famous example is FWD.us, Mark Zuckerberg’s abortive effort to advocate immigration reform via a tax-exempt 501(c)4 “social welfare” organization—now dead in the water after it paid for ads pushing the Keystone XL pipeline and provoked a public outcry.

The industry has been dominated for decades by an anti-establishment, libertarian strain of thought, one that has made for sloppy calculations in the rough-and-tumble of public life. But as tech companies start to explore how much the government can do to benefit them, that outlook is changing. Enter Ro Khanna, Democratic primary challenger in California’s 17th District and the industry’s $2.5 million man.

On a warm evening in early May, the candidate geared up—as he has several times daily for more than a year—to sell himself. Before a standing-room-only crowd inside the Fremont City Hall, a squat building in this quiet Silicon Valley suburb, the intellectual property lawyer and Stanford economics lecturer asked the room to vote for him over the man standing beside him, incumbent congressman (and fellow Democrat) Mike Honda.

Here in one of the few Asian-American-majority districts in the country, turbans bob above the crowd and the spectators chat in Hindi, Cantonese, Tagalog. A few miles to the southeast, the Tesla Motors factory hums away; elsewhere in the district—which encompasses several cities in Silicon Valley—are the headquarters of Apple, Yahoo, eBay and Intel. With less than a month to go until the primary election, the energy in the room is palpable. As a result of California’s relatively new “jungle” primary system, the top two finishers in June will make the November ballot regardless of party affiliation, thereby opening the door for a well-funded upstart like Khanna to challenge a party stalwart like Honda. It won’t be easy, however: if history is any indication, unseating an uncontroversial incumbent is difficult if not impossible, and the most recent poll, from February, showed Honda winning by a healthy margin, with Khanna and Republican Vanila Singh running neck and neck.

This isn’t Khanna’s first run for office, but it is his best-funded. In 2004, he ran against fellow Democrat Tom Lantos to represent California’s 12th District, which then encompassed an area a few miles northwest of Khanna’s current district; he ended up with less than 20 percent of the vote. In 2012, he raised $1.2 million before deciding not to run. This time, his tech-friendly, pro-business message has pulled in nearly $2.5 million. Google, Facebook, Microsoft, Oracle and a half-dozen venture-capital firms have all thrown their weight behind Khanna, to the tune of at least $10,000 each. Sheryl Sandberg and Marissa Mayer are supporters, as is Google’s Eric Schmidt and Sun Microsystems co-founder Vinod Khosla. So too, puzzlingly, is the famously libertarian venture capitalist Peter Thiel (Khanna is reportedly the first Democratic candidate to whom he has offered support).

In person, at a coffee chain in a nondescript strip mall near Fremont’s downtown, Khanna offers a similar pitch when asked why the industry has thrown its weight behind him. “With me, [the tech community] sees someone who understands the issues, the complexity of the issues,” he says. “Honda isn’t conversant in the language and the issues.” He mentions his “coding in the classroom” initiative, which would give public schools incentives to teach computer programming. “If you asked Mike Honda, ‘What language would you teach?’, I don’t think he would know. His knowledge on these things is an inch deep. If you’re not going to speak the language, you’re not going to get to the values.”

Lanky, soft-spoken and dapper in a navy suit, Khanna is a polished candidate. And he has a politician’s gift for tailoring his message: when speaking with The Nation, he uses words like “progressive” and “liberal” and is quick to mention that he came out early for gay marriage and against the war in Iraq. It’s a marked change in rhetorical tactics from last May, when Khanna told the crowd at a $2,600-a-plate fundraiser well attended by the tech elite that “it’s time we actually change politics,” adding that “Silicon Valley has the potential to do this.”

Honda, by contrast, is a Democrat with strong ties to labor and the support of almost all his Democratic colleagues, including President Obama, Attorney General Kamala Harris and House minority leader Nancy Pelosi. His campaign has raised a half-million dollars less than his opponent, largely from unions and small donors. On the trail, he’s made a point of courting not Silicon Valley’s “investor class”—that is, its CEOs and founders, most of whom live outside the 17th District—but rather the industry’s rank-and-file programmers and semiconductor fabricators, and he’s been forthright about his intentions to make sure this working- and middle-class district is “for everybody and not just for a few.”

Incredibly, the Khanna campaign has used Honda’s commitment to progressive economic policy to paint its candidate as an underdog, an outside-the-box thinker—a “disruptor,” in Silicon Valley parlance. But what’s obscured in the dichotomy created by the Khanna campaign—tech-savvy innovator versus out-of-touch elder statesman—is that Honda has, in fact, taken a series of clear positions on tech questions. In some cases, those positions have been much clearer than those of his competitor.

In 2003, Honda introduced a landmark nanotechnology bill that authorized more than $3.7 billion to be invested in nanotech. He vocally opposed the Stop Online Piracy Act and the Protect Intellectual Property Act—House and Senate bills, respectively, that would have dramatically advanced the government’s ability to intervene against websites hosting copyrighted material. Today he opposes the Cyber Intelligence Sharing and Protection Act, which would allow companies immunity in sharing user data with the NSA. He describes himself as an “ardent defender” of net neutrality. He is co-chair of the Democratic Caucus New Media Working Group and has championed funding for science, technology, engineering and mathematics, the so-called STEM fields. All told, there don’t appear to be many substantive tech issues that Honda doesn’t “get.”

But in an industry that takes the techno-utopian view that government is made to be hacked and that legislators are merely the hackers, the investor class may be looking less for a set of policies than for someone who will prioritize their needs over time. Silicon Valley donors don’t describe Khanna in terms of positions and platforms, but rather in impressionistic terms, in cultural platitudes and buzzwords. They are particularly fond of saying that Khanna “gets it,” that he understands their values and speaks their language, whereas Honda doesn’t. Khanna himself plays into this cosmetic-level criticism with his argument that his opponent doesn’t know the intricacies of various coding languages, perhaps forgetting that the congressman is a legislator, not a developer.

There’s a term for this in tech: “culture fit,” the qualitative sense that a job candidate would assimilate to a given company’s culture. As Paul Graham—co-founder of the tech incubator Y Combinator, Khanna’s second-biggest single campaign donor—told The New York Times Magazine in 2013: “I can be tricked by anyone who looks like Mark Zuckerberg…. There was a guy once who we funded who was terrible. I said: How could he be bad? He looks like Zuckerberg!”

Khanna looks close enough. He uses techie jargon fluently, unabashedly and often—“disrupt” appears to be a personal favorite—and frequently describes his district as the “heart of innovation.” He’s gone on record calling himself a “tech groupie.” He behaves, in other words, exactly like the sort of person that Silicon Valley companies like to hire. It’s not that Khanna is more in touch with technology than Honda; it’s that he’s far more in touch with the donors who control it, and who treat him like the employee they might expect on Capitol Hill.

In a region where the titans of industry are extremely (and almost exclusively) young; where Mark Zuckerberg famously told a Stanford audience that “young people are just smarter”; and where the corporate culture is notoriously inhospitable to anyone over 40, Mike Honda—a white-haired 72-year-old who often mentions his childhood in a Japanese internment camp as part of his stump speech—is simply not “a culture fit.”

Although not a single member of Silicon Valley’s investor class would go on record and into policy-level specifics about why he or she is supporting Khanna, their companies have a lot to gain from having a sympathetic ear on the Hill. The largest tech firms’ interests begin with standard legislative concerns like lowering corporate and capital gains taxes and increasing the number of visas for the types of workers they employ. Khanna is opposed to increasing capital gains taxes and supports increasing the number of H1B visas, which are frequently used by tech employees and were lobbied for by Facebook’s FWD.us. He is also broadly supportive of free trade, getting behind the Korea Free Trade Agreement opposed by many Democrats, including Honda.

These companies’ services have the size and scope of public utilities, although they are not regulated as such, and the industry-specific nature of their interests is sometimes obscure. Take Google: Khanna’s largest corporate donor has long since ceased to be a mere search engine—it’s now selling broadband Internet in the heartland through Google Fiber and phones all over the world through the Android operating system. That means it has a significant stake in issues ranging from patent law to land use to free trade to net neutrality. Google’s voluntary lobbying report for the fourth quarter of 2013 lists dozens of such issues and bills. In 2012, Google was among the deepest-pocketed corporate lobbying operations in Washington (second only to General Electric among corporations), with more than $18 million in expenditures. That’s an astronomical increase from just ten years ago, when Google had a single lobbyist and a lobbying budget of around $100,000. On the essential issue of net neutrality, Google’s position has shifted from full support to partial opposition after getting into the broadband business in 2013. Today, Google’s position on the contentious issue of net neutrality is mixed: it would like to charge content providers for faster access to consumers, instead of keeping all traffic on an equally fast lane.

Should Khanna make it to Capitol Hill, these issues will be the priorities of his major donors—a far cry from those of the less wealthy Californians Mike Honda has represented for four terms. It remains to be seen whether Khanna’s campaign will succeed in eliding the difference between understanding the tech industry and serving its interests in Washington. Silicon Valley certainly hopes so. To have someone on the Hill who can disrupt regulation and perhaps throw some visas their way? Now that would be a culture fit.