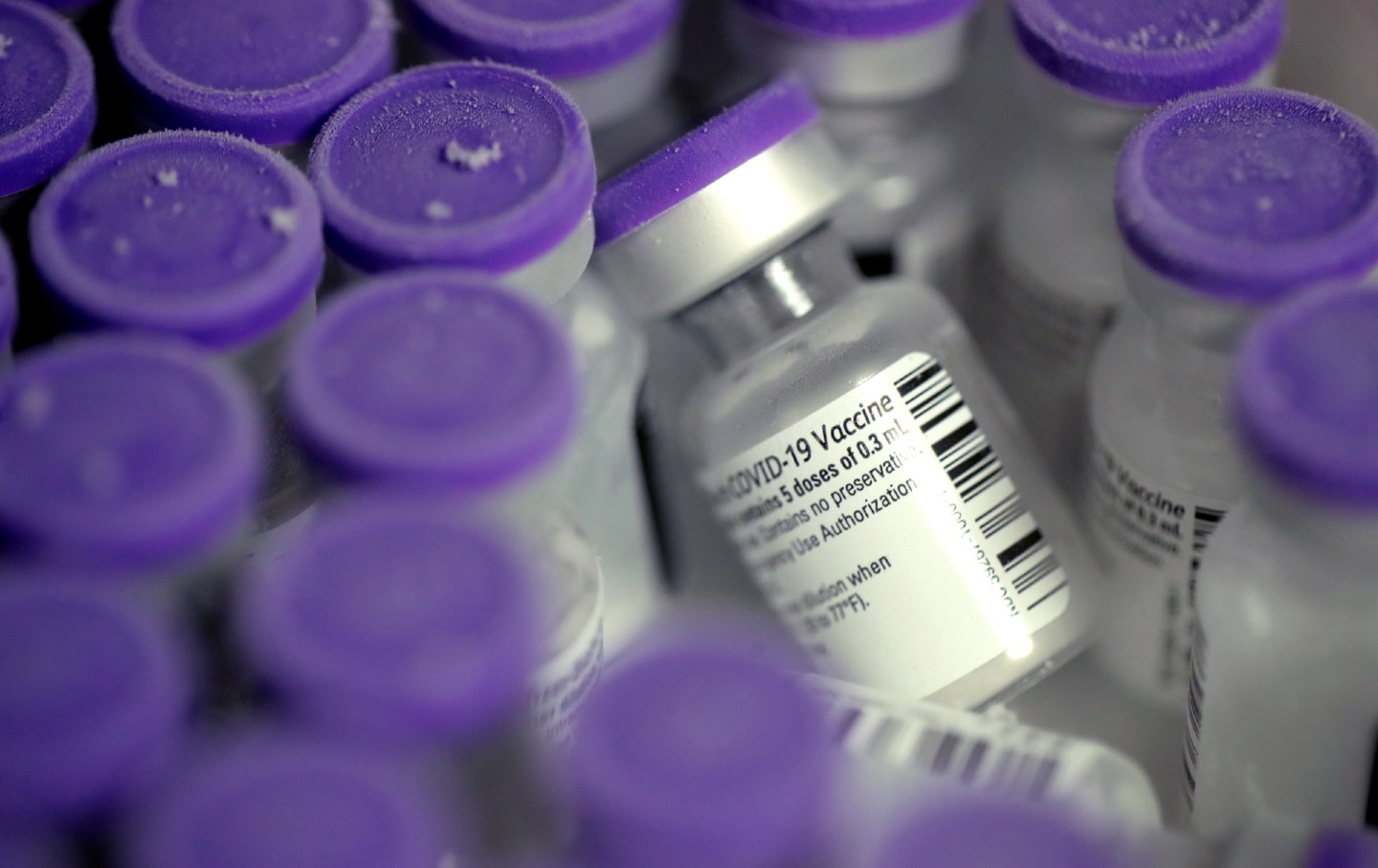 The Covid-19 vaccine, stored at -80 degrees Celsius at Roseland Community Hospital in Chicago. The hospital began distributing the vaccine to its workers on December 17, 2020. (Scott Olson / Getty Images)

Amid the continued pandemic-induced horror, we find ourselves getting emotional over our fellow health care workers’ social media posts announcing their receipt of the Covid-19 vaccine. But our joy and relief at the sight of smiling faces next to newly needled biceps and the corresponding “I got my shot” stickers fade when the accompanying announcement specifies which pharmaceutical company name adorns the bottle from which the serum was drawn. We can’t help but wonder: Why are health care workers doing free marketing for pharmaceutical companies?

To be sure, we should all celebrate the technologies that will hasten the end of this devastating disease. But thanking the manufacturers of the available vaccines—or even using their names as primary product descriptors—contributes to a narrative that elevates the value of private corporations while simultaneously minimizing the significant public investment in these vaccines. Meanwhile, pharmaceutical companies maintain an extractive relationship with taxpayers: We fund the discovery, and often the development, of novel treatments and vaccines—before handing them off to corporations to bring them to market. Then, we pay again to access them.

Executives at Moderna have admitted that their product was funded 100 percent from bench to bedside through Operation Warp Speed, a federal government program bankrolled by American taxpayers. Not only did the public provide $1 billion to the company to bring the vaccine to market, but government scientists at the National Institutes of Health (NIH) also helped conduct the clinical trials that led to its authorization by the Food and Drug Administration. Experts also posit that, according to patent application disclosures, the US government may actually co-own key patents for the vaccine since a critical component was discovered by NIH scientists. Now, the US government has paid again for this vaccine through a $3.2 billion contract with Moderna for 200 million doses.

While the executives at Pfizer and BioNTech claim that their product did not benefit from taxpayer funds, they continually fail to acknowledge the public support that they received from the German government, or that the mRNA technology the vaccine relies on was developed by NIH-funded university scientists. In spite of these public contributions, the federal government has paid almost $4 billion to Pfizer for 200 million doses. 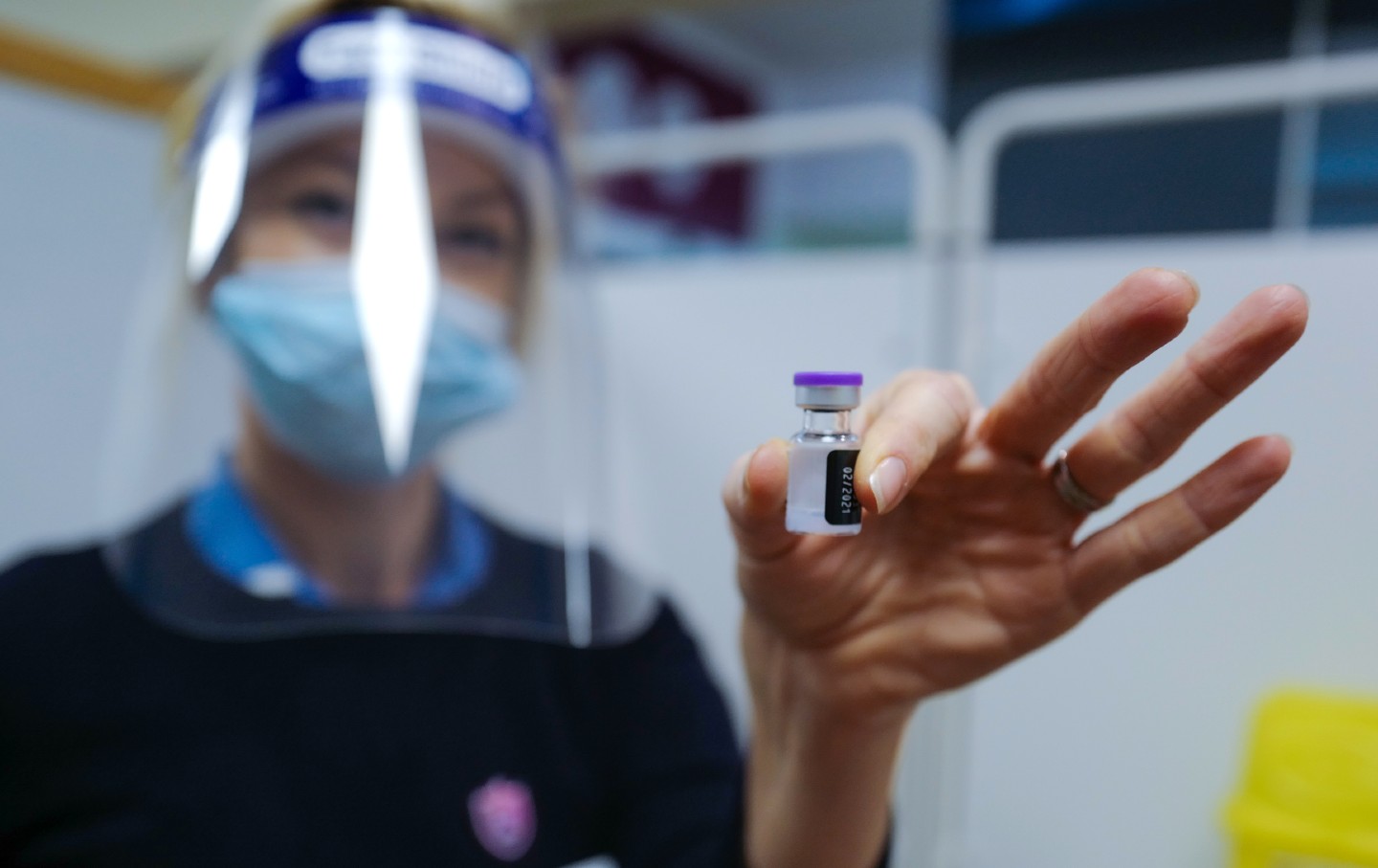 So When Can I Get the Covid Vaccine?

Over and over again, pharmaceutical companies have their product development de-risked by taxpayers, while reaping exorbitant profits with no obligation to ensure access to their products. Pfizer, which recruited tens of thousands of volunteers for its vaccine clinical trials in countries such as Argentina, Brazil, South Africa, and Turkey in addition to the United States, has simply thanked these volunteers—in lieu of actually providing them with access to the vaccine.

We recognize that most health care workers are well-intentioned in sharing the vaccine manufacturer’s name. Follow-up messages updating friends and family about how they’re feeling after vaccination indicate that perhaps this practice aims to address vaccine hesitancy online. But noting that the vaccine they received is “Pfizer’s” or “Moderna’s” assumes wrongly that people will have the choice of which vaccine they receive, and that individuals will have collected enough data from social media posts to generate a well-informed preference. The reality is that the vaccines are essentially the same, born from the same mRNA technology discovered by the NIH, and that our friends and family should take the first one they’re offered—especially given ongoing challenges with access.

Although we’ve paid multiple times over for these vaccines, companies are under no obligation to make them accessible. Earlier this month, President Biden committed to releasing all available vaccine doses—not reserving any for the second dose—as a measure of expediting rollout. Yet even his advisers admitted that if this is done, booster vaccinations may be delayed. Soon after Biden’s plan was announced, the Trump administration proclaimed that it would release vaccines that had been held in reserve for second doses. Then we learned that no such reserve exists. Governors who had been anticipating larger allocations to quickly vaccinate elderly and other high-risk individuals were left with only reassurances that Pfizer and Moderna are expected to ramp up their production. Amid all these delays, Pfizer also successfully lobbied the federal government to change vaccine vial labels to reflect a surprise additional sixth dose. Although extracting these extra doses are difficult, the company plans to count these towards the government’s prior orders and will ship fewer vials.

Instead of relying on these companies, the Biden administration could ensure timely access by laying claim to the publicly funded technology through full use of the Defense Production Act (DPA), as called for by Senator Elizabeth Warren and Representative Katie Porter, and coordinating with other manufacturers to produce additional and urgently needed vaccine doses. President Biden’s current plan to use the DPA to scale up manufacturing of vials and syringes just won’t be enough.

Rather than say that these are Pfizer’s, Moderna’s, or another company’s vaccines, let’s take the first step towards a vision of universal access by calling them what they really are: the people’s vaccines. Let’s recognize the impact of our collective contribution with a more authentic narrative—that indeed, #ThisIsOurShot. By doing so, we can look toward a future in which access to vaccines is no longer controlled by pharmaceutical companies but by those who funded their existence in the first place.