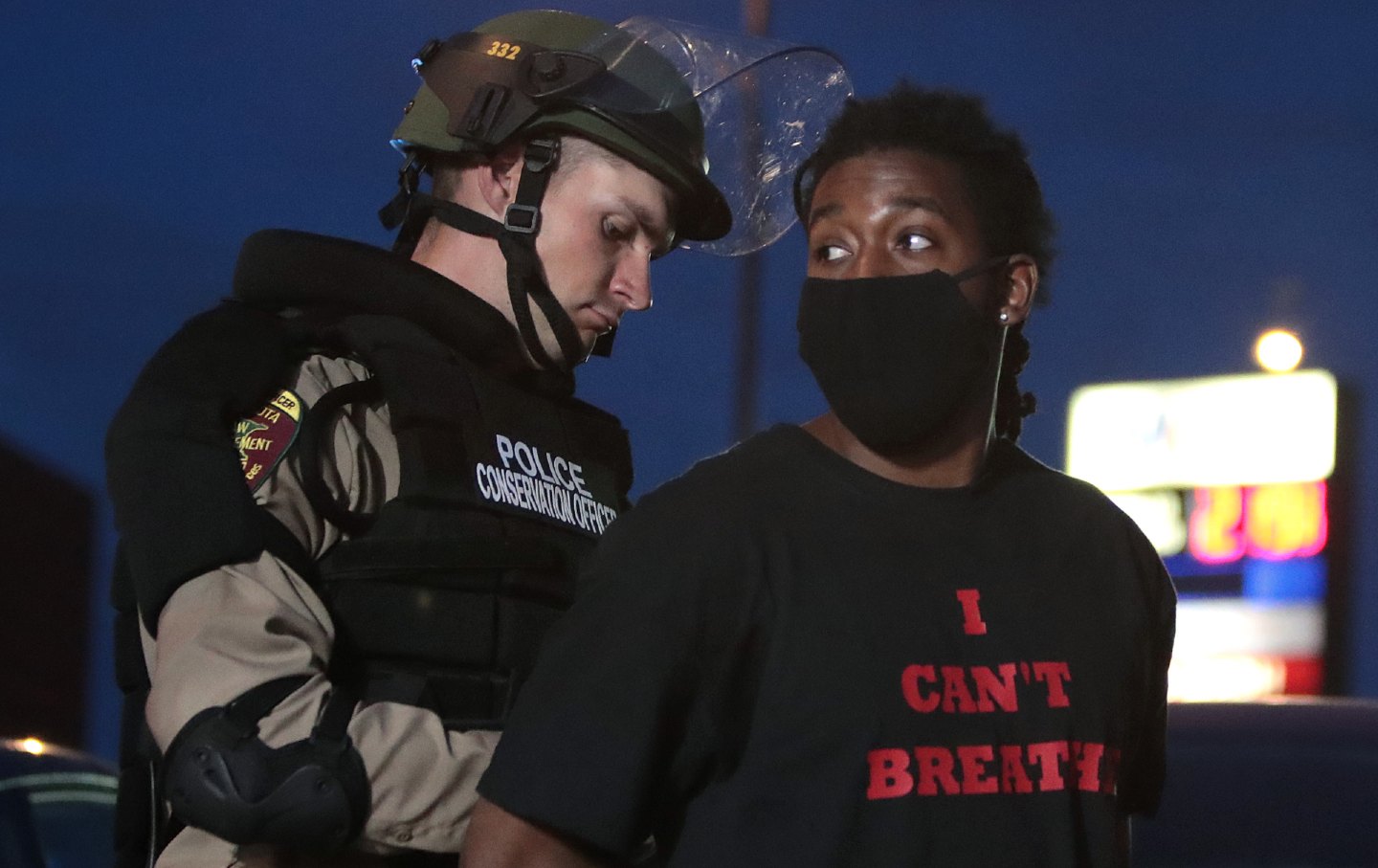 A police officer in riot gear arrests a demonstrator during a protest against police brutality and the death of George Floyd in Minneapolis, Minn. (Scott Olson / Getty Images)

Minneapolis. Most of the time, this is a remarkably orderly and well-kept city. In 1980, while experts warned that other cities were becoming obsolete, Minneapolis remained a beacon of hope, a place that, said National Geographic, “can still nurture the human species.” However, citizens’ scant patience for interrupting this idyll meant that the city tolerated a police department riddled with violent, bigoted officers. The current unrest, sparked in Minneapolis and spreading across the country, offers a chance to examine how this city went from beacon to burning. Minnesota, perhaps more than any other state, embodies the failures of liberal efforts to achieve equitable dignity through public safety. As the writer David Lawrence Grant states, “The hard truth is that police departments deal with communities of color in exactly the way that American society, Minnesota society, has asked them to.”

The city’s liberal reputation was solidified by the election of Donald M. Fraser in 1980 after a campaign dominated by his pledge to professionalize the police department. Fraser picked the progressive cop Tony Bouza to overhaul a force defined by brutality, corruption, and politicization. The day before Bouza’s swearing in, officers raided a gay bathhouse to make it clear that they would not be tamed. Bouza pushed forward, instituting a multitude of improvements and reaching out to racial and sexual minorities.

For all the genuine progress Bouza made, he was unable to rein in the “thumpers.” Of the 227 complaints of excessive force by MPD officers from 1983 to 1987, none were upheld by the City. The police union objected to disciplinary measures, and Bouza acknowledged that he could not fire those officers who were “demonstrably unfit” or “oftentimes even criminal” because of the “paralyzing strictures of civil service.”

Police brutality here was disproportionately directed toward the city’s black, Native American, and gay populations. Minneapolis was emerging as a cosmopolitan place policed by many officers who despised the city. When urbanites asked police about crime, a common retort was, “Why don’t you move into the suburbs where you can feel safe?”

Bouza was pushed out in 1989 because of two contradictory impulses reflecting the city’s desire for order: The chief was blamed both for not reining in the “thumpers” and for not doing enough to crack down on the city’s expanding drug trade. Residents resented sluggish police response times and the MPD’s inability to stop open-air drug dealing. Many African Americans felt they were getting “the cold shoulder” from the police department, a black city council member complained. He demanded that “every means possible” be used to eradicate these illegal activities.

Fraser and Bouza were skeptical about street-level narcotics enforcement, but their hesitations were overwhelmed by citizen demands to “do something.” The city’s response unleashed the “thumpers” in militarized drug raids. After blowing open doors, cops screamed, “Police! Get your fucking asses down, down, you fuckers! Get the fuck down now! I want to see your hands behind your back, now, now, now!” After securing the inhabitants, the hunt for the spoils was on: freezers and food canisters emptied, garbage bags ripped open, furniture destroyed. An estimated 90 percent of the raids targeted African Americans, and officers poured salt into racial wounds, turning radios from rap to country stations and taunting suspects.

The MPD’s war on its own citizens had devastating consequences. “Wrong house raids” incited anger, especially after two elderly African Americans were killed in January 1989 by a fire started by a flash-bang grenade. The following month, “thumpers” instigated a police riot against black college students at a downtown hotel. Black leaders charged that the MPD had moved from harassment to “a conscious move towards organized violence against our community.”

Keith Ellison: On the Other Side of Criminal Justice Reform and Transformation Is a Safer Society

The Color of Fear

Will New York Join the List of Cities With Progressive DAs?

Activists rallied to bring an out-of-control police force to heel. It didn’t happen. The diverse segments of the population—gays, blacks, American Indians, white progressives—could not agree on a unified agenda. Meanwhile, Minneapolis officers demonstrated the kind of solidarity that would make the most committed socialist jealous. When officer Dan May shot Tycel Nelson, a black youth, in 1990, messages on squad car computers read, “Dan May for Chief” and “Dan May for Pope.”

Police critics struggled to devise alternatives and the usual liberal reformism—better and more policing—stepped into the breach. No ambitious police leader seeking to make chief could admit that the force could not prevent crime, so the department engaged in a litany of “innovative” community policing programs. Meanwhile, broad public support for the drug war allowed police to maraud across the city, declaring victories for “real people” over “assholes.” By the mid-1990s, the toxic stew of prohibition and illegitimate law enforcement contributed to a skyrocketing homicide rate, making the once-placid city “Murderapolis.” In Minneapolis, as in so many cities, the tactics of warrior cops became a part of everyday life.

The killing of George Floyd is another flashpoint. As in 1989, Minneapolis can chart a new course on public safety that will impress voters and not just graduate students. It won’t be easy. Just last year, a strong majority of city residents surveyed—including 65 percent of racial minorities—supported adding 250 cops to the force. Those seeking to diminish the role of the police will have to be ready for backlash not only from law-and-order obsessives and the 911 addicts but downtown business interests as well—particularly the sports and entertainment complexes grown dependent on the corporate welfare of an ever-larger publicly funded security force.

All communities in this polyglot city—gay, black, immigrant, Native American, and white—will have to ask hard questions about what they expect the police to accomplish. This is bigger than police accountability or procedural justice. It gets to the heart of reconsidering our reliance on the criminal justice system to address social issues and of finally producing a humane vision of public safety.