Striking achievement: LA teachers and parents celebrate their victory in 2019, including a pay hike for teachers and a cap on class size. (Scott Heins / Getty Images)

Every big idea cherished by progressives—including the Green New Deal, Medicare for All, universal child care, and tuition-free college—requires massive government spending and a robust regulatory structure. None of these urgent proposals will come to fruition without the ability to reverse four decades of withering austerity by raising taxes on corporations and the superrich. For the past 45 years, right-wing culture warriors and the corporate elite have united around one simple concept that enables them to achieve their agenda: cutting taxes on themselves and dismantling the enforcement powers of every agency dedicated to anything good, including civil rights, public education, the environment, and labor. Rather than rely on presidential candidates as our saviors or endlessly revise utopian policy proposals, it is crucial that we examine which strategies, led by whom, are winning and why.1

In November 2012, after two years of devastating budget cuts brought on by the Wall Street–induced Great Recession, a multiracial coalition of membership-based community organizations in California teamed up with forward-thinking unions and did the unthinkable: By 55 to 45 percent, it won a statewide ballot initiative that would increase taxes. When the campaign began, it proposed an increase in the personal income tax rate for people earning $1 million or more annually. In the back-and-forth of power and politics, a last-minute negotiation to win the support of then-Governor Jerry Brown resulted in a compromise: a personal income tax increase on people earning more than $250,000 coupled with a 0.25 percentage point increase in the sales tax. Although the grassroots coalition’s original proposal was for purely progressive taxation, the deal reached with the governor to include a regressive sales tax increase helped push the measure into the win column. Framed as a response to the fiscal crisis, these tax increases were temporary; both were scheduled to sunset after several years.2

In 2016 the coalition returned, proposing and winning a second ballot initiative that extended the tax on the rich until 2030 and ended the sales tax increase. The revenue from those 2012 tax increases alone took California from being on the precipice of disaster, deep in the red and gutting public services, to having a rainy day fund that has enjoyed robust reserves since then, bolstered by the 2016 extension of the tax hike on the rich. It was this coalition of grassroots, membership-led community groups and unions that gave California the fiscal ability to act and be seen as the resistance to Donald Trump’s agenda.3

This group of capable organizers, rooted in structure-based organizations in the workplace and in the community, composed of many groups whose leaders and members are overwhelmingly women and people of color, is now attempting the unthinkable: challenging Proposition 13, passed by California voters more than four decades ago. This is the very law that launched the nationwide anti-tax movement, directly contributing to the destruction of public education and public everything-else-good, and exacerbating wealth and power inequality by gutting the vital services to low-income families that help them climb into the middle class. If these twice-successful anti-austerity organizers succeed, they will set the stage for community-based organizations and unions nationwide to tax corporations and the superrich, thus increasing our chances of actually winning on the progressive policies that pile up year after year with no hope of ever being put into practice.4

According to Stephen Moore, the first president of the virulently anti-tax conservative political machine known as the Club for Growth, in an opinion he penned in 1998 as the fiscal policy chief at the Cato Institute:5

Political analysts often argue about when the modern-day conservative movement in America began. Some say that it began with Barry Goldwater’s campaign in 1964. Others say it began with the election of Ronald Reagan in 1980. I believe that the conservative, anti-big-government tide in America began 20 years ago with the passage of…Proposition 13 in California. Proposition 13 was a political earthquake…. It also incited a nationwide tax revolt at the state and local levels. Within five years of Proposition 13’s passage, nearly half the states strapped a similar straitjacket on politicians’ tax-raising capabilities.6

Proposition 13 rolled back property taxes to 1975 levels and then capped them at 1 percent of the property’s assessed value, taking a slow-moving, often hard-to-see wrecking ball to funding for public schools and city and county budgets. In addition, deploying right-wing strategic savvy in going for structural long-term change rather than short-term gain, the proposition amended the state’s Constitution, henceforth requiring any state tax increase to pass by a minimum two-thirds vote in the legislature and any local tax initiatives to get approval from at least two-thirds of voters. Meanwhile, cutting taxes requires only a simple majority. (Statewide ballot initiatives like the one that raised taxes on the rich in 2012 also require only a simple majority, but getting an initiative on the ballot entails a whole other set of legal hurdles and organizing expenses.)7

Anthony Thigpenn, a longtime organizer and the brains behind the millionaire tax and its extension, is now spearheading the challenge to Prop 13, called the Schools and Communities First ballot initiative. As he notes, “The passage of Prop 13 was part of the racist backlash to the social movements of the ’60s, the battles to desegregate schools, and the large-scale entry of workers of color into unionized public sector jobs.” The conservative movement behind the measure campaigned on saving Californians money, but the very same players behind Prop 13 were also resisting fair housing laws, school busing, and school integration. Its real objectives were clearly racist.8

The genius of Schools and Communities First is that it focuses exclusively on closing a giant corporate loophole that never should have been part of the original law, by removing commercial property from Prop 13’s protections. Called a split-roll initiative, the measure will result in $12 billion being funneled back into public schools and local governments. And if this measure was important in the pre-Covid-19 days, it’s crucial now. Says Thigpenn, “In this time of deep health and economic crisis, the strategic significance is that rather than accepting austerity budgets, which increase economic and racial inequality, we are challenging corporate dominance and providing resources for schools and communities with a racial justice lens.”9 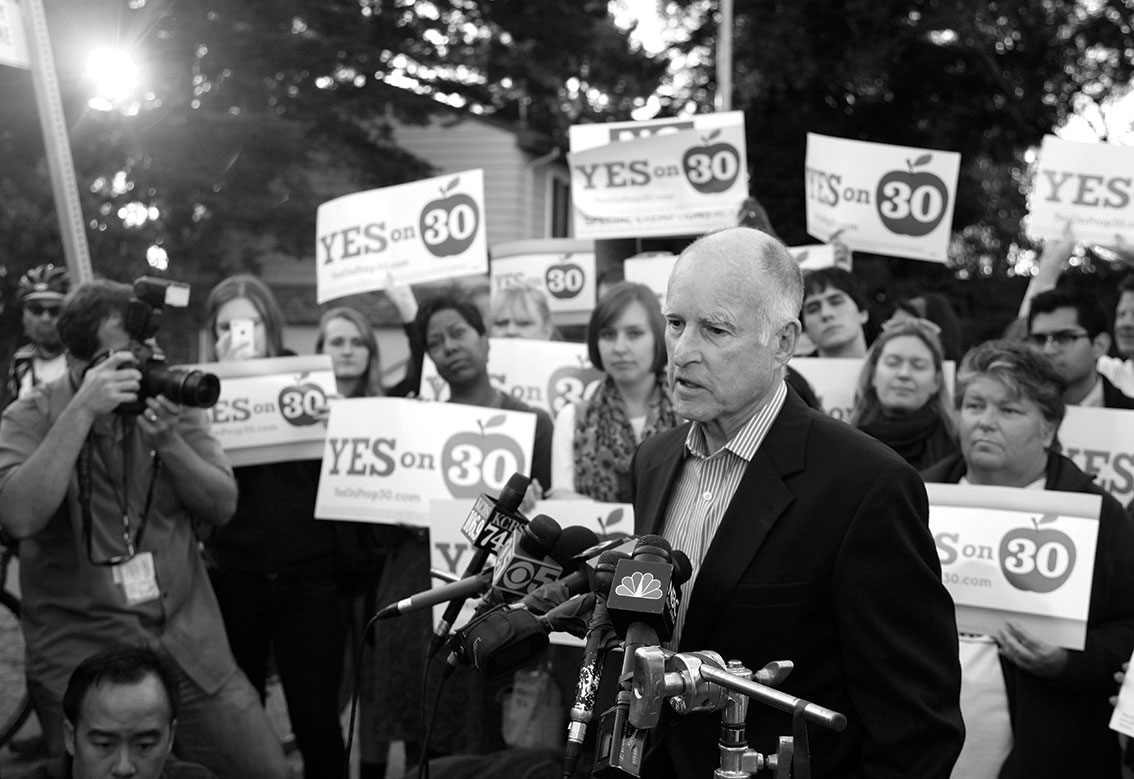 To explain its repeated success in what few progressives have achieved—taxing corporations and the rich and renewing the public sector’s funding base—the coalition points to its political analysis, which holds that economic, gender, and racial justice are inseparable, and its strategy, which combines serious political education and deep organizing to expand its rank-and-file base. Rather than pop up every four years, spend a lot of money, and then shut down (as far too many electoral campaigns do), these organizations have worked consistently on expanding the universe of people they can mobilize when it’s time to turn out the vote.10

The Immense Irony of the GOP’s Anti-Socialism Vote

The labor unions key to this effort all have memberships rooted in the mission-driven sector of today’s service economy: the California Teachers Association, the California Federation of Teachers, and the California State Council of the Service Employees International Union. And dozens of membership-based community groups—often dismissed by the national players—have coalesced into the California Calls coalition. On the union side, some of the earliest supporters came from the leadership of United Teachers of Los Angeles, whose 34,000 members waged an incredibly successful all-out strike in 2019. The impetus to get the statewide education unions behind these efforts began with progressive teacher-leaders in UTLA in 2011 and continued last year with another major education union that waged and won a successful strike, the Oakland Education Association. Across the state, local unions and community-based groups work together to determine who has the strongest base in a given area, taking assignments for critical voter education work in order to complement one another’s efforts. Instead of wasting time and resources by talking to the same voters, this approach allows the coalition’s members to spread their resources strategically.11

For progressives across the nation, the lesson from these efforts in California is clear: To win, we need a long view, not an electoral-cycle view. Alone, neither the unions nor the community-based groups could have won in 2012 or 2016; to win in 2020, it will likewise require deep and honest collaboration. The unions involved are ones that have real relationships, not merely transactional ones, with their rank and file. The community-based groups, too, have membership bases in which ordinary people exercise real agency; they are not advocacy groups that merely speak on behalf of the poor. To win all across America, to stand a chance to push back against massive Covid austerity, will require commitment by unions that have first learned to rebuild their supermajority strike muscle, carrying their big numbers and organization into supermajority political participation. It will also require forging real partnerships with bottom-up, community-based organizations that have been all but ignored by the big foundations and big donors. Winning, in short, is not about shortcuts; it’s about deep organizing.12