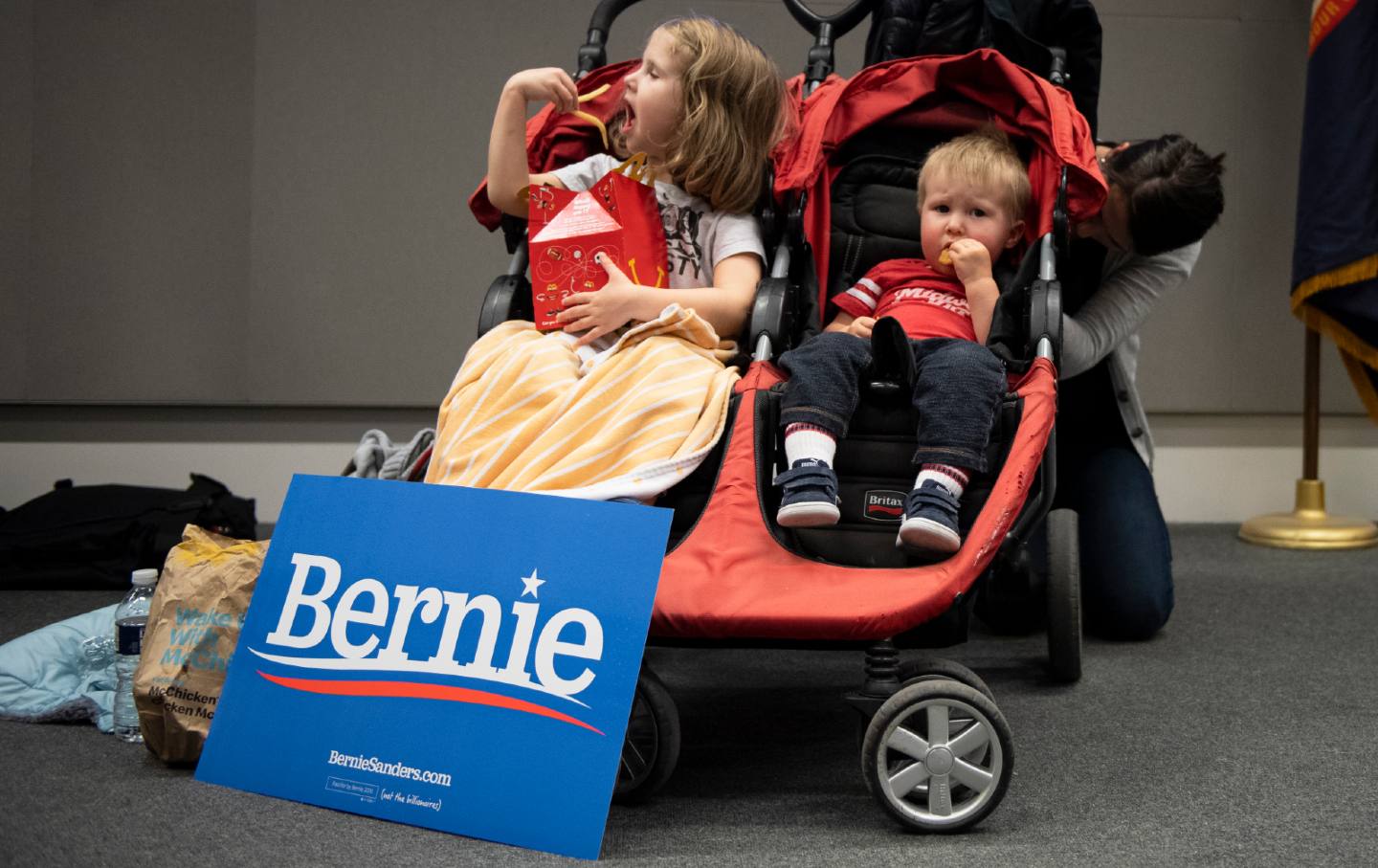 When I found out last November that I would be moving to New York for an internship that would overlap with the Democratic primary season, I was on a bus to a Bernie Sanders rally in Des Moines. The first person I told was Sanders’s Iowa State University campus organizer, who congratulated me, and then jokingly began searching online for how much it would cost for me to fly home to Iowa to caucus. I knew that in 2020, the Iowa Democratic Party would be significantly increasing the number of satellite caucus sites—locations where registered Iowa voters could caucus if they weren’t able to caucus in a traditional precinct—but the satellite caucus locations wouldn’t be announced for another six weeks, and I wasn’t sure there would be one in New York. Although I was excited to move, I was disappointed that I would lose my primary vote. I had spent months volunteering for Sanders and had expected caucusing to feel like crossing the finish line.

But the Iowa Democratic Party approved a satellite caucus in Brooklyn, and I was relieved to still have my voice heard. Caucusing is an unusually physical form of voting, asking participants to stand in “preference groups” showing who they support. If less than 15 percent of caucus-goers indicate support for any candidate, that candidate is deemed “unviable” and their supporters are asked to “realign.” Once all caucus-goers have either aligned with viable candidates or accepted that their alignment won’t earn a delegate, the precinct chair calculates how many delegates each candidate will receive. The energy in the room, and the arguments caucus-goers make to one an other, depends on who shows up. If you live in a rural area, your fellow caucus-goers are likely to be older, and their arguments for realignment might focus more on environmental regulations for farmers or trade policy—things that have very clear and immediate impacts on many of their livelihoods. If your caucus is in a college town, the economic hardships facing college students will likely inform the discussion on policies such on proposals for college affordability and Medicare for All.

Caucuses are often depicted as crowded and loud, but my first caucus was relaxed. In 2016, I caucused for Bernie Sanders in Truro, Iowa—a town of about 500 people. Most people had made up their minds before they arrived, with only one voter aligning as uncommitted on the first go-around. The crowd that night was larger than the one that gathered at my satellite caucus location in Brooklyn on Monday afternoon, but the energy was similar.

Organizers for the Yang, Biden, and Klobuchar campaigns were gathered outside the Brower Park Branch of the Brooklyn Public Library, helping to usher caucus-goers inside while offering them campaign literature. More waited inside the library’s community room alongside members of the press and caucus officials, while 11 Iowa voters trickled in, and at 4 pm, the caucus was officially called to order. For all its attempts at inclusivity this year, the Iowa Democratic Party still holds a low tolerance for tardiness. Two latecomers were granted mercy for arriving before the total numbers of participants had been tallied, but one who arrived around 4:15 was turned away.

Unsurprisingly, no Iowa officials or candidates had shown up to speak at our location, so first alignment quickly began. Seven caucus-goers, including the precinct chair, went to Sanders’s corner. Three went to Elizabeth Warren’s camp, and one went to Klobuchar’s. Klobuchar organizers quickly descended on the Sanders and Warren groups, emphasizing the importance of making sure her voice would continue to be heard in the race, but they were unable to pry any voters away, leaving Klobuchar unviable. During second alignment, the lonely Klobuchar supporter quickly moved to Warren’s camp, and the caucus concluded just over an hour after it started.

C’mon, Iowa, This Is Just Ridiculous

Caucuses in the Caucasus

The Iowa Caucuses Have Long Turned Out the ‘Same Old White Crew.’ 2020 Could Be Different.

Fans of the caucus often prop it up as “democracy in action,” but the question for the caucuses quickly becomes: Do the benefits of having people discuss their beliefs face-to-face outweigh the harms of disenfranchising those who can’t attend? As a young, able-bodied, native-English speaker with no particular sensitivities to audio or visual stimulation or revealing her political alignment and a job willing to let her make up the hours missed, the satellite caucus was enough to make participating in the Iowa caucus accessible to me. But for many others, satellite sites are insufficient. And at caucus sites like Brooklyn and Truro, where there’s little persuasion to be done, what exactly is the benefit? At both caucuses I’ve participated in, it seems as if they’ve been better at portraying the idea of democracy than actually bringing people into democracy.

As the Democratic Party claims to prioritize securing the right to vote for all, it also takes no pause in turning people away for showing up 15 minutes late to a meeting. If you work a wage job, it forces you to choose between an extra shift and your right to vote. If you have children, it asks you to pay for a babysitter. If revealing your political beliefs would put you in personal or professional danger, the Iowa Democratic Party says, “Too bad.”

It’s easy to be swept up in the excitement of the caucuses. The larger precincts are loud and exciting. There’s an adrenaline rush every time you pull another voter to your corner. But that doesn’t outweigh the harm done to those who couldn’t vote because they couldn’t spare three hours on a Monday night, particularly in a system where ties can be broken by coin flips. Attempts to increase transparency in how percentages translated into delegates led to inconsistencies in vote tallies, and the glitches with the party’s new app have left Iowans with no winner well into Tuesday.

It’s understandable that people enjoy a system that encourages them to go talk to their neighbors about politics and hopefully learn about each other’s priorities and beliefs, but it’s important to acknowledge that a system that requires people to physically be in one room for several hours on a Monday night in the middle of an Iowa winter isn’t accessible to every Iowan. The discussion is valuable, but it’s only as valuable as the portion of the electorate who can access it—which is far too small.