Ticket prices at Disneyland and Disney World have been skyrocketing over the past decade, while workers’ wages have remained mostly stagnant, and Robert Iger, who announced last month that he’s stepping down after almost 15 years as Walt Disney Company CEO, has been getting a free pass.

The Los Angeles Times described Iger’s tenure at the top of the company as “one of the entertainment industry’s great corporate success stories.” The Wall Street Journal extolled Iger’s achievement of expanding the company “into Hollywood’s biggest and most powerful entertainment conglomerate over a more than 14-year tenure.”

Missing from the worshipful tributes to Iger’s career is the reality that under his leadership the company achieved its success on the backs of its consumers and its employees.

Since Iger took the helm in 2006, the company grew its revenue from $31 billion to $69 billion from its vast global network of theme parks, feature films, and broadcasting. Last year,, Disney earned $14 billion in profits and the company’s board gave Iger an 80 percent boost in his compensation to $65.7 million. His annual compensation was 1,424 times what the median Disney worker earned—one of the widest CEO-worker gaps of any American corporation.

In a Washington Post op-ed column last year, Abigail Disney, granddaughter of Disney co-founder Roy Disney and grandniece of Walt Disney, called Iger’s pay level “insane.” Responding to her and others’ criticisms over Iger’s excessive pay, the company cut his compensation to $47.5 million.

Iger’s replacement as CEO, Bob Chapek, has been responsible for Disney’s resorts as well as the production of Disney toys. As CEO, he will earn a base salary of $2.5 million, plus an annual bonus “of not less than 300 percent of the annual base salary” in addition to an annual “incentive award” of “not less than $15 million,” according to documents filed with the Securities and Exchange Commission.

Iger and these other top Disney executives live a world apart from the workers—mostly young women—who produce the toys and clothing adorned with Disney figures that are told at the resorts and in retail stores around the country. The company has an appalling history of worker abuse around the world. Since the late 1990s, human rights groups have reported that many of Disney’s consumer products have been made in sweatshops in Bangladesh, China, and Haiti.

A January 1996 report by the National Labor Committee (NLC) uncovered that Disney’s “Mickey Mouse” and “Pocahontas” pajamas were made in a factory in Haiti that paid workers as little as 12 cents an hour, below the country’s minimum wage. The exposé pushed the factory owners to raise pay levels to the legal minimum of about 28 cents an hour, but a follow-up study reported that employees were still living “on the edge of misery,” especially since they were often short-changed by the factory. The report described some workers’ shock when they learned that the Pocahontas garments sold in the United States for $10.97—the equivalent of almost five days of their wages.

In 2002, the NLC sent investigators to the Shah Makhdum factory in Dhaka, Bangladesh, where about 450 workers made “Winnie the Pooh” shirts and jumpsuits bearing the Disney label. According to NLC’s finding, employees were required to work 14-to-15-hour shifts and seven-day workweeks but were not paid overtime as required by law. Their pay ranged from eight to 19 cents an hour. The factory was hot, crowded, and poorly ventilated. Workers were subjected to verbal and physical abuse. The drinking water contained high levels of bacteria. When workers complained about the working conditions, Disney moved its work elsewhere.

Iger inherited the company’s sweatshop problem but did nothing to address it. In 2007, the year after Iger became CEO, China Labor Watch reported on brutal conditions at Chinese factories making consumer goods for Disney. It found widespread labor violations in eight factories, including the hiring of underage workers, excessive overtime, unsafe conditions, and sexual harassment.

Two reports in 2012—by the Institute for Global Labour and Human Rights and the Center for Health, Environment and Justice—and one in 2018 by China Labor Watch again detailed labor violations, destitution-level wages, and dangerous working conditions—including the risk of fire and exposure to toxic chemicals.

Disney has consistently claimed that it has no legal responsibility for these sweatshop conditions because it does not own any of the factories but uses subcontractors who produce the items based on Disney’s specifications. Even so, the company has asserted that it has its own monitoring system to guarantee that the conditions do not violate health, safety, and wage standards.

Despite its vast resources, Disney’s monitors have routinely failed to uncover the inhumane conditions that human rights groups, which operate on shoestring budgets, have exposed year after year.

The products made in these overseas sweatshops are sold in stores around the world, including the stores at Disney’s California and Florida resorts, which last year attracted over 86 million visitors. Since Iger became CEO in 2006, the cost of a one-person daily pass to Disneyland increased from $63 to $209, a 155 percent increase adjusted for inflation, far above the 28 percent increase in the Consumer Price Index during that period. In addition to charging visitors exorbitant prices, the Disney Company has used its political clout—including campaign contributions to local elected officials—to secure subsidies, incentives, rebates, and protections from future taxes in Anaheim that the Los Angeles Times estimated to be worth more than $1 billion.

Disneyland theme park workers have not shared in the prosperity. 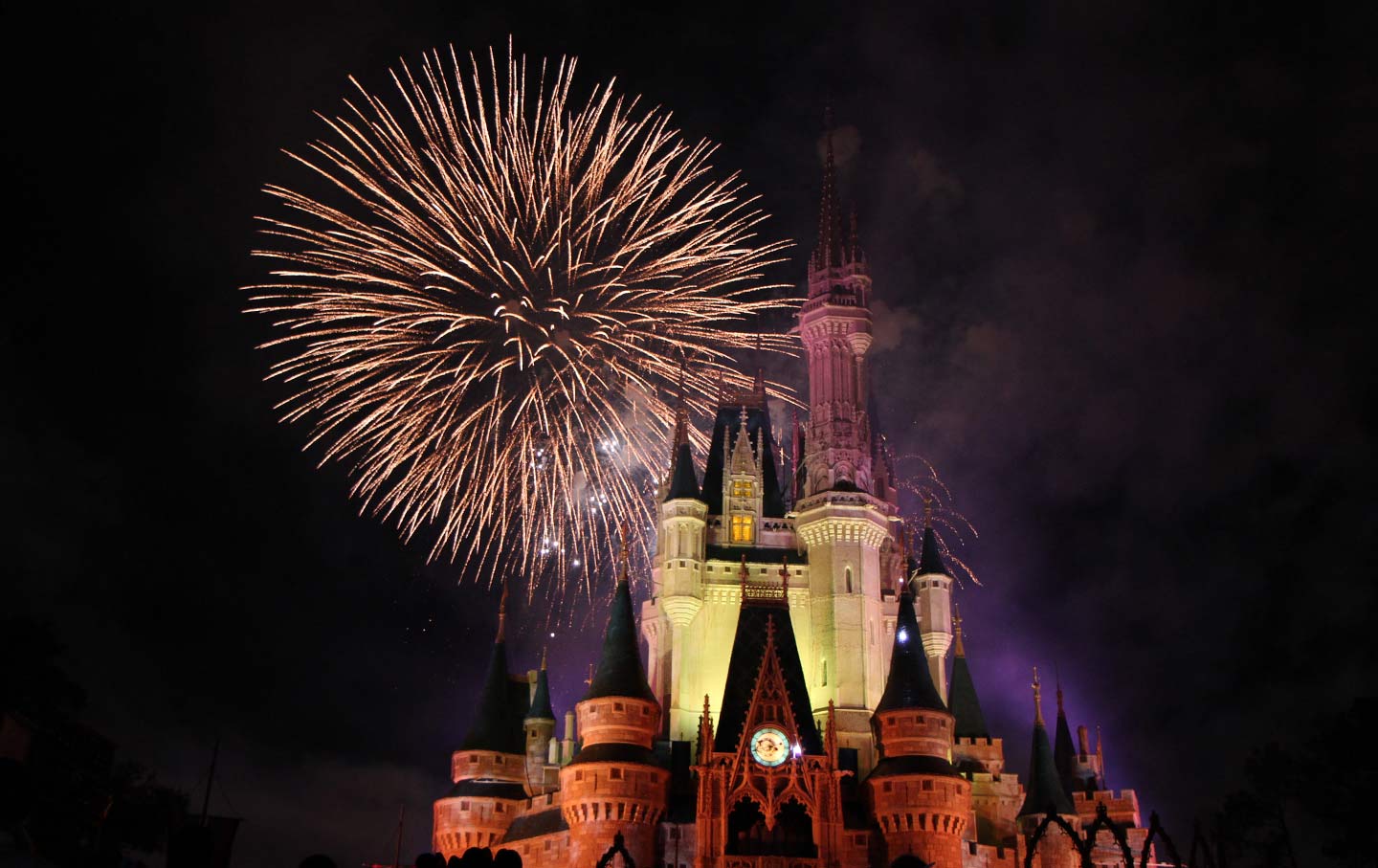 In our 2018 survey of Disneyland employees, “Working for the Mouse,” Dan Fleming and I found that workers were paid so little that 11 percent reported being homeless at some point in the previous two years, two-thirds said they didn’t have enough food to eat three meals a day, and three-quarters said they couldn’t afford basic expenses every month. Fifty-six percent were worried about being evicted from their homes or apartments. Two-thirds of them—and three-quarters of those with young children—were “food insecure,” lacking sufficient access to safe and nutritious food. Disneyland requires its employees to smile at park visitors, but 43 percent reported that they couldn’t afford dental care. More than one-third of employees with young children said they need but couldn’t afford prescription medicine.

“I’ve spent the last 29 years working to give people a magical experience at Disneyland, and yet every month, I face choices between rent, food or bills,” said Glynndana Shevlin, a food and beverage concierge at the park, told us. “I have been evicted twice. I’m often hungry because I’m skipping meals. At work, I’m a clean, happy person, but when I leave and get in my car, I become a sad, unhappy person who doesn’t always know where I’m going to sleep.”

Partly in response to the report, the unions representing Disneyland workers, along with allies among community and faith-based groups, sponsored a citywide initiative on the November 2018 ballot, Measure L, requiring any large hospitality business benefiting from Anaheim city subsidies to pay at least $15 an hour to their workers beginning in 2019, increasing by $1 an hour in annual increments until it reached $18 an hour by January 1, 2022, after which it would increase annually by the rate of inflation.

On June 2, 2018, Senator Bernie Sanders spoke at an Anaheim rally to support Measure L. “The struggle that you are waging here in Anaheim is not just for you,” he told a large crowd. “It is a struggle for millions of workers all across this country who are sick and tired of working longer hours for lower wages.” He also attacked Iger’s excessive salary and noted that the company received a $1.6 billion tax break from the Trump tax giveaway to the rich.

Later that month, Sanders, Senator Elizabeth Warren, and 21 other Democratic Congress members signed a letter to Iger, urging him to use the company’s huge profits to pay Disneyland employees a living wage.

Responding to the pressure, in July 2018, the company raised the minimum wage for 9,700 Disneyland employees (those represented by several of the unions) to $13.25 for the remainder of 2018 and to $15 in 2019. Under the agreement, employees already at or above the minimum wage would receive an annual 3 percent wage increase.

The Anaheim government, however, refused to require Disneyland to abide by Measure L’s provisions, because it claimed that the resort no longer had any municipal subsidies, even though the city spent $108.2 million to build a massive six-story 10,241 car parking garage in 1996 that it leases to Disneyland for just $1 a year and that generates about $50 million a year in parking revenue for the company. In December 2019, UNITE HERE Local 11, on behalf of its members, filed a class-action lawsuit to require the city to implement Measure L for Disneyland employees.

Are Disney Workers Having a Hard Time Making Ends Meet?

Despite this dispute, the Measure L campaign helped pressure the company to agree to a three-year contract that raised hourly wages by as much as 20 percent immediately and an additional 13 percent in January 2019. The company gave similar pay increases to over 37,000 workers at Disney World in Orlando, Florida.

These victories, however, did not end the controversy over Disney’s practices. In addition to calling Iger’s $65.6 million compensation “insane,” Disney heir, Abigail Disney, said that excessive CEO compensation in general has “a corrosive effect on society.”

“I like Bob Iger,” said Disney, a filmmaker who owns stock in but plays no role in the management of the company. “When he got his bonus last year, I did the math, and I figured out that he could have given personally, out of pocket, a 15 percent raise to everyone who worked at Disneyland, and still walked away with $10 million.” She criticized “this class of people who—I’m sorry this is radical—have too much money. There is such a thing.”

Her comments generated headlines around the world, as did her Washington Post column, “It’s time to call out Disney—and anyone else rich off their workers’ backs.” She called Iger’s compensation “naked indecency” and made similar remarks, and headlines, in testimony before Congress. And Disney’s descendant described the battle over Disneyland’s working conditions and Iger’s compensation as a surrogate for a wider debate over the social responsibility of big corporations and the dangers of unfettered capitalism.

Because beneath the charismatic, cosmopolitan, and gregarious veneer of this lavishly paid Hollywood executive is a man who has perpetuated the suffering of workers and exploited the allure of Disney’s resorts for millions of hard-pressed visitors, in order to maximize corporate profit and personal stock bonuses.