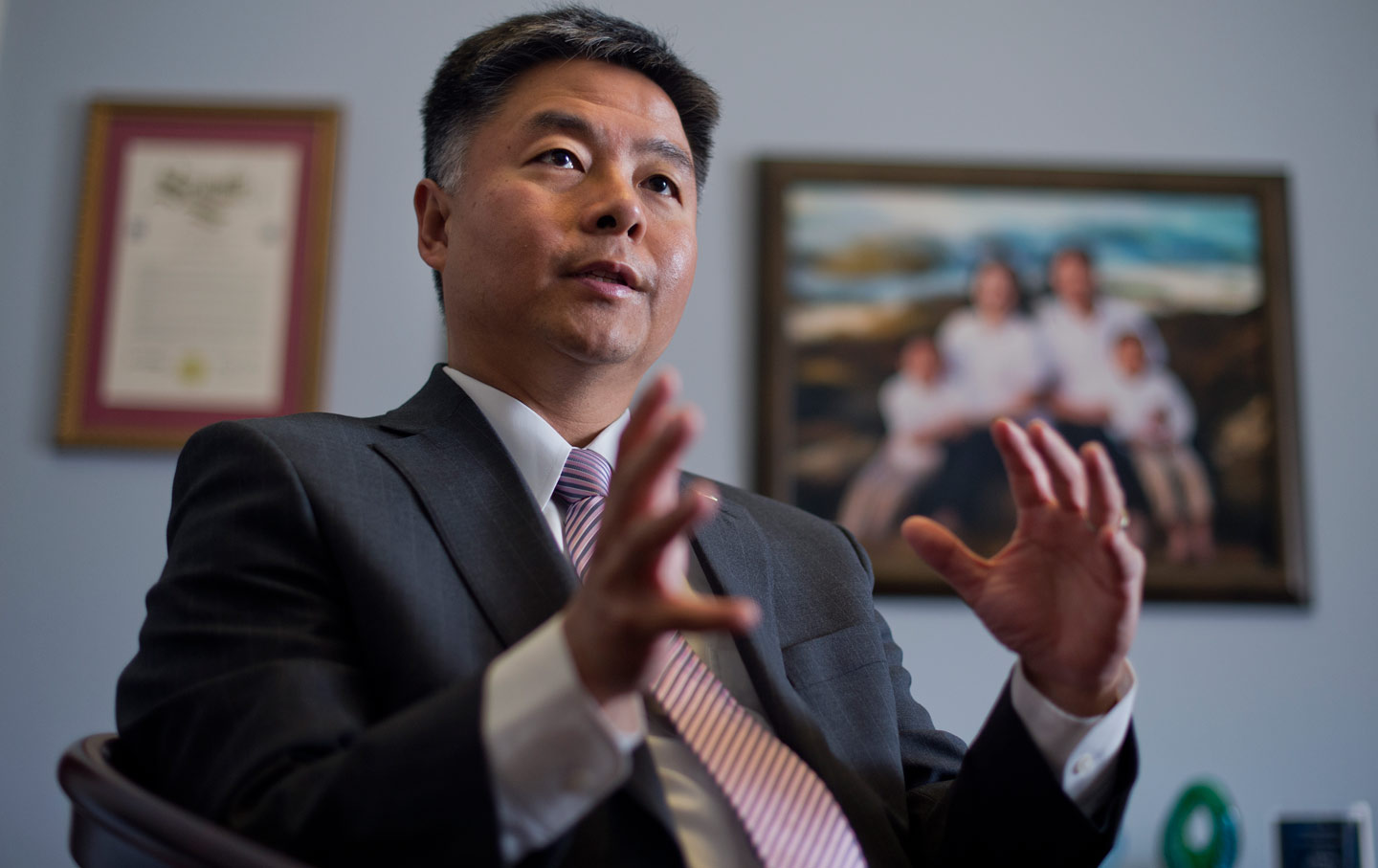 This week, Representative Ted Lieu sent a letter to the Secretaries of State and Defense, in which he made a remarkable charge: “U.S. personnel are now at legal risk of being investigated and potentially prosecuted for committing war crimes.”

Lieu, a first-term congressman from Southern California, knows a thing or two about international law. He’s a colonel in the Air Force Reserves, and during his four years of active duty he was a military prosecutor in the JAG Corps. He taught the Law of Armed Conflict to fellow military personnel.

Now, he thinks the United States may be violating that law by assisting the Saudi-led military coalition in Yemen. And he’s been fighting a lonely battle these past 18 months as one of the few members of Congress to call out the United States’ involvement in this war. “I see a lot of downside,” he told The Nation. “In addition to the moral outrage of aiding and abetting war crimes, this is hurting our national security because the people there in Yemen now understand this as a coalition being enabled by the United States. And so every bomb that drops on a civilian is a very powerful recruiting tool for terrorists.”

The Saudi coalition’s declared targets are Houthi militants who launched a government takeover and sparked a civil war, but the collateral damage has been extreme. Human-rights groups have documented at least 70 unlawful airstrikes that hit schools, hospitals, funerals, and agricultural centers. Over 10,000 civilians have been killed and famine is ravaging the populace.

The United States has been a willing partner in this coalition, supplying jets, bombs, and fuel to these missions. That makes the country complicit—morally and perhaps legally—in what appear to be deliberate war crimes.

“This coalition has struck hospitals four times, including a Doctors Without Borders hospital that caused that organization to leave the northern part of Yemen. They have struck wedding parties, civilian markets, [and] schools. According to one of these [human-rights] reports, they designated one entire city as basically a target, and you can’t do that under law of war,” Lieu said.

“I can understand if it was in the first few months of war, and you had some airstrikes that hit a bunch of civilians, that maybe they can attribute that to pilot error or the fog of war. But when you’re now in it for well over a year, and you’ve got over seventy of these strikes, then you can’t say it’s pilot error anymore,” he continued. “Especially since the Saudi-led coalition has complete air superiority. At some point it becomes either intentional targeting of civilians, or, a coalition that just doesn’t care that they’re hitting civilians.”

The United States isn’t directly bombing anything, but their material support to the Saudi coalition might still implicate them in war crimes under international law. The international war crimes trial of former Liberian president Charles Taylor expanded what is considered a war crime, because the U.N.-backed court found that “practical assistance, encouragement or moral support” can determine liability.

The United States has already invoked the Taylor ruling in its case against Khalid Sheikh Mohammed, to strengthen its argument that he was complicit in the September 11 terrorist attacks.

Last month, Reuters reported that internal State Department memos were raising serious questions about the Taylor ruling in particular and US legal liability in Yemen in general. But the department still went ahead with a $1.3 billion arms sale to Saudi Arabia.

“I thought it was surprising that they went ahead and continued to push for arms sales, and to continue assisting the Saudi-led coalition without answering the question of whether the coalition was committing war crimes,” Lieu said. “That would seem to me a pretty important question to answer first.”

Lieu has been on a mission to press the administration for answers. He has met with State Department officials numerous times, though Lieu says he never got clear answers. “They don’t say there are war crimes, but they also don’t say that there are not war crimes. They sort of say they’re relying on investigation by Saudi Arabia, which is something that country is incapable of doing—investigating itself for war crimes.”

The letter he sent this week was prompted by a remarkable statement from a senior US official that US support for the bombing campaign does not include “target selection and review.”

“I find it deeply troubling that the U.S. apparently has no advanced knowledge of what targets will be struck by jets that are refueled by US personnel with US tankers,” he wrote. “US personnel are now at legal risk of being investigated and potentially prosecuted for committing war crimes.”

He then peppered Kerry and Carter with a list of questions he wants answered: Do they dispute human-rights groups’ reports of airstrikes on civilians? Did the United States at any point participate in target selection and review? And what steps are being taken to comply with the Law of Armed Conflict? He also asked if the United States specifically fueled the planes that struck a school and a Doctors Without Borders hospital this year.

Lieu is waiting for answers, though if recent history is a guide, they may not be forthcoming. It might help if he was not one of the few people making these inquiries.