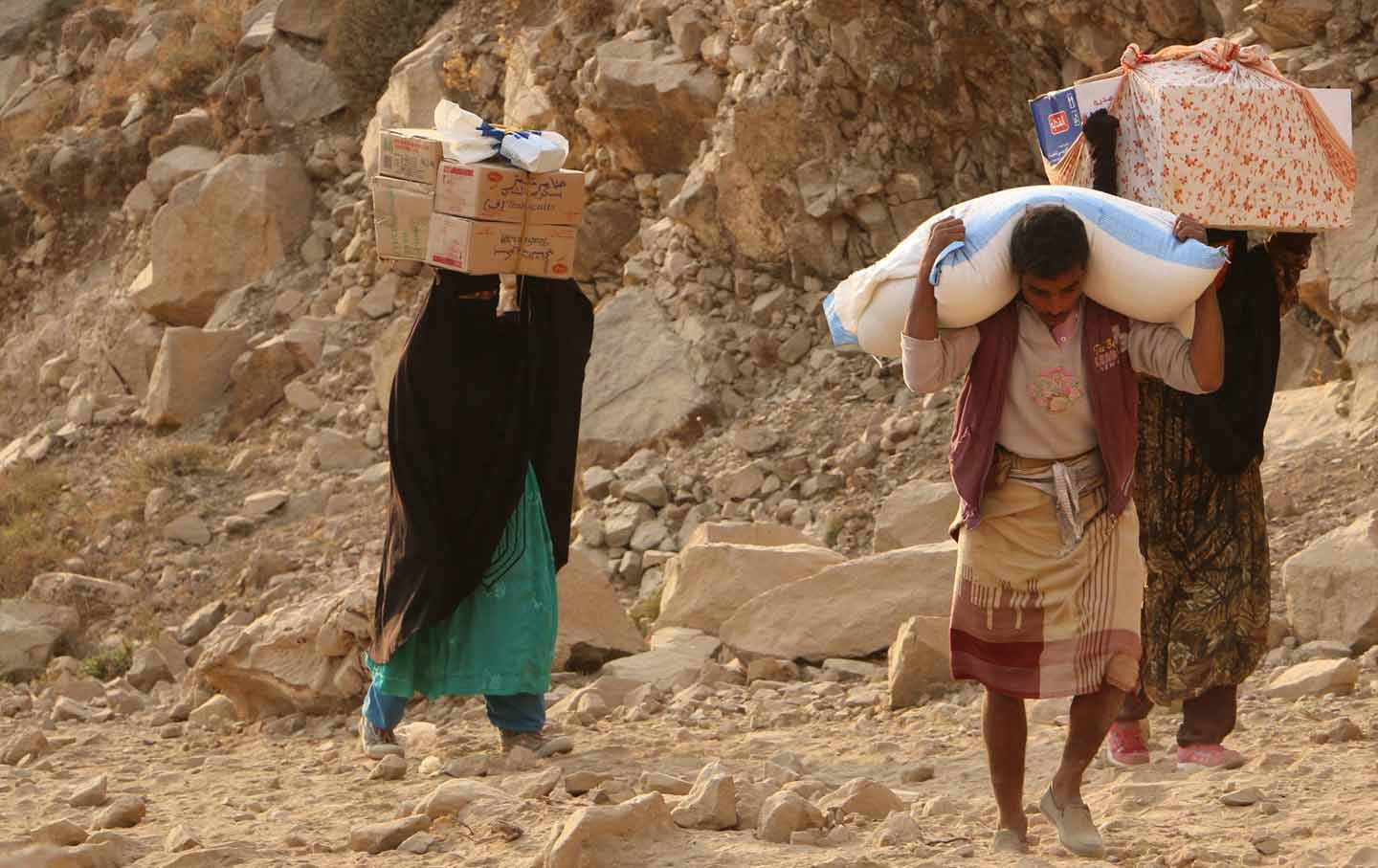 Yemenis carry relief supplies to the city of Taiz, where residents have been going hungry for weeks, according to the World Food Program, January 17, 2016. (AP Photo / Abdulnasser Alseddik)

The international press has rightfully focused attention in the past couple of months on the plight of the people of Madaya in Syria, who have been starved by the Syrian regime and its allies. This week, the United Nations is attempting to draw attention to the similar plight of the people of Taiz, Yemen’s third-largest city. Starving out noncombatants is a war crime. Unfortunately, it is one being widely and routinely practiced, sometimes by allies of the United States. Washington has a responsibility to see that charges are brought at the International Criminal Court against civilian officials and military leaders who order such crimes. Where politics makes this step impossible, the United States must at the least mobilize what boycotts and sanctions it can. Where the policy is being carried out by US allies, Washington’s obligations are clear.

At least 400,000 Syrians are trapped in conditions of severe food insecurity, caught in the cross-fire of military maneuvers by the regime and its opposition. While Madaya and nearby Zabadani are being starved by the Assad regime and its allies in order to get at Al Qaeda (the Nusra Front) and other hard-line Salafi jihadis using them as a base, Foua and Kefraya in Idlib consist of Shiite populations being starved by the opposition, elements of which are supported by the CIA and by Saudi Arabia and Turkey.

In Yemen, a Saudi-led coalition backed by the United States is at war with an indigenous tribal group, the Faith Supporters, or Houthis. The result is that the UN’s World Food Program estimates that the country’s third-largest city, Taiz, is only one level below famine, despite the small amounts of food aid it has been able to deliver in the past two weeks. (To be fair, some of that food was paid for by the Saudis.) Indeed, people in 10 of the country’s 22 provinces are in the same boat. Some 7.6 million Yemenis (a country of 24 million) are now food insecure, and some UN agencies suggest the number is double that. Some UN officials have seen a pattern of Saudi airstrikes on food convoys headed to Houthi-held areas, or on ports key to provisioning the civilian population. The Houthis have also been charged with using food denial as a tool of war. The threat of famine is driven not only by military disruptions of food delivery but also by price spikes in what food there is. (Many victims of famine starve to death not because there is no food but because they cannot afford to buy it.)

Cynics will maintain that wars inescapably involve war crimes. The history of military diplomacy, however, does not support that contention. Outside of superhero movies, no one boasts of killing innocent women and children. Even those who glorify their own ruthlessness depict their victims as dangerous or polluting to the body politic, not as innocent. Rather, movements and governments are eager to justify themselves to the outside world, and gaining its support is sometimes crucial to their success. Throwing light on war crimes, as defined by international treaties and instruments that are now enforceable against individual leaders under the Rome Statute, is crucial to combating this recrudescence of mass brutality in the contemporary world. The 1977 protocols to the Geneva Conventions, which explicitly declare that use of starvation as a method of war is a crime, were signed by Syria, Yemen, Saudi Arabia, and the United Kingdom, so this norm is not alien but rather something widely agreed to by treaty in the region.

The United States has little leverage on the Houthis in Yemen (who are largely autonomous despite exaggerated Saudi claims of Iranian backing). But Washington is giving substantial logistical support to the Saudi-led war effort against them, even helping to choose bombing targets. Where it sees Saudis bombing hospitals in Taiz or blockading ports even from food deliveries, Washington has a responsibility to speak out. Likewise, the United States can do little against Assad’s policies in Syria, but it can threaten Syrian opposition groups with being cut off from T.O.W. anti-tank munitions and monetary aid if they starve several thousand noncombatants to death. (Indeed, the United States should long since have cut off aid to hard-liners who even tactically ally with Al Qaeda on the battlefield; didn’t 9/11 teach us anything?) Where the UN Security Council can reach a consensus on the commission of war crimes by a commander in the field (shouldn’t that be easy in the case of Syrian Al Qaeda’s siege of Foua and Kefraya?), it should forward the case to the International Criminal Court.

The ICC’s hands are sometimes tied, since it can only take up the cases of officials in countries signatory to the Rome Statute, unless the UN Security Council unanimously forwards the case, as it did with regard to Libyan dictator Moammar El Gadhafi. If the Obama administration wished to, however, it could find some common ground for such referrals at the UNSC in the Middle East’s current killing fields. (Why, for instance, have ISIL leader Abu Bakr al-Baghdadi’s war crimes not been sent to the ICC?) Trials of the war criminals won’t put food in the mouths of starving children, but pursuing such cases is important as a deterrent against leaders who now think they can act with impunity, and as a statement of UN members’ aspirations for a modicum of decency even in conflict situations. And, speaking of impunity, it would help if the United States, which led the way in creating the United Nations and in passing the Geneva Conventions, would sign the 1977 additional protocols and join the International Criminal Court itself. Beyond mobilizing such institutions of global law, the United States needs to make fighting the use of starvation as a tool of war a priority in its own diplomacy.