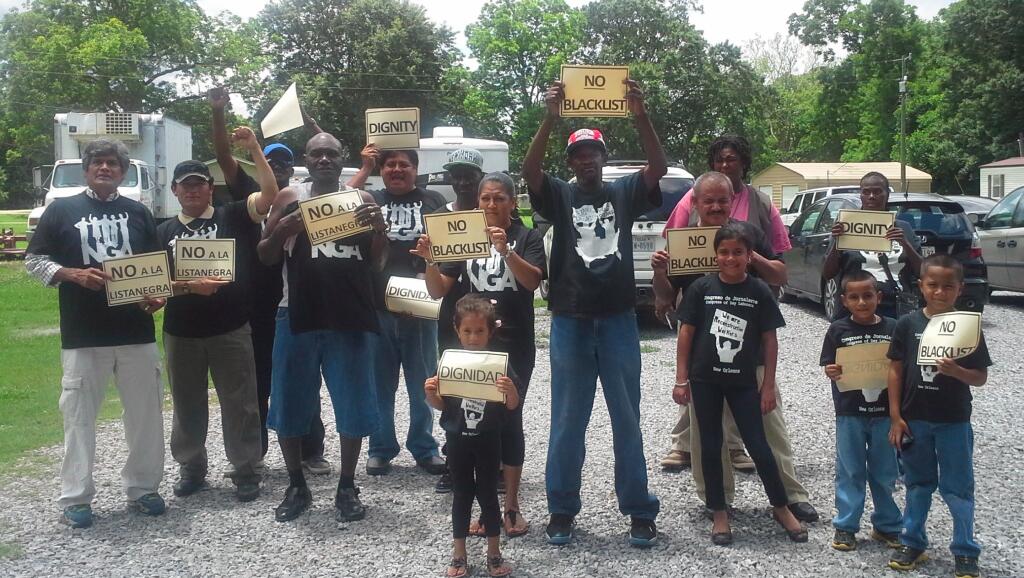 Every year, US companies invite thousands of special guests from abroad into the labor market, and they arrive clutching visas that will provide them short-term jobs in food processing, farmwork and other seasonal sectors. The guestworker’s visit is often an uneasy one: everything hinges on that temporary work permit—not just a job, but also the very right to be in the country. So they are typically careful to avoid making any trouble with the boss who sponsored them.

But Olivia Guzman is the rare guestworker who has stood up to her boss, the seafood processor Bayou Land Seafood, and so this year, she’s been disinvited. And when the company declined to bring her back to Louisiana for her usual seasonal job, she got even bolder, because she was sure that she was being shut out of the country simply for her labor activism and for organizing her coworkers.

Guzman did eventually make it back to the United States from her town in Sinaloa last week, to knock on her employer’s door—not for her usual annual work assignment, but to serve a complaint with the National Labor Relations Board (NLRB). The freshly filed complaint, backed by Congress of Day Laborers, STAND with Dignity and National Guestworker Alliance (NGA) alleges Bayou Land “refused to hire and blacklisted” Guzman due to her “protected concerted activity on behalf of the rights of guestworkers.”

Guzman’s activity is “protected” only on paper, however. According to labor advocates, workers in the gulf seafood processing industry have suffered massive exploitation and intimidation. Bayou Land’s alleged retaliation stems from a successful labor campaign that Guzman helped organize against Walmart supplier CJ’s Seafood. In 2012, the campaign, led by NGA and other advocacy groups, exposed patterns of epidemic labor violations, from wage theft to forced labor conditions to health hazards, along an intricate supply chain that links big retailers to the dregs of Louisiana’s seafood industry to Mexican towns that feed migrant labor into the factories. The campaign, which involved striking and public protests as well as petitioning regulators, eventually prompted the Labor Department to propose various reforms to the H-2B regulations. Though the regulations have been stalled by litigation and blocked by congressional conservatives, employers have apparently made some limited material improvements in working conditions.

But Guzman says that across the sector, guestworkers still lack the power in the workplace to really negotiate the terms of their employment, and hers is a case in point.

Guzman says that when she recently reapplied for Bayou Land’s sponsorship, they told her that they were refusing to hire her because she had allegedly caused “problems” with her coworkers, and repeatedly ignored her and NGA’s requests for further justification.

A Bayou Land spokesperson claimed to the Times-Picayune that the company paid the workers as much as $13 an hour and provided “clean, safe and comfortable” living quarters. Guzman counters that the modest improvements in the industry have only been won through the agitation led by workers.

That these workers managed to take any political action at all is a considerable feat. The program that brought the Walmart guestworkers to the United States, the H-2B visa, is aimed at bringing a low-wage, and legally disenfranchised supply of temporary labor into notoriously exploitative industries like cannery and hotel work. The seafood guestworkers, whose legal sponsorship depends on their continued employment with a designated employer, were regularly forced to work upwards of 16 hours a day in squalid conditions, sometimes physically locked inside—and terrified of being sent home.

Guzman, who has worked at several Walmart supplier factories, says through an interpreter that workers often felt they had no choice but keep working “to make just a little bit of money, to make it worth it that we came all this way to work.” The instability of their seasonal jobs is used by the bosses “to make us bow our heads, to keep silent…and make us always ready to do anything to keep our jobs.” Under this relentless pressure, she adds, the boss “makes us feel like his slaves, and like we are his property.”

While Guzman’s complaint wends its way through the NLRB system, activists have waged a campaign to shame Bayou’s major clients, Target, Whole Foods and Walmart, with letters demanding that the companies “refuse to purchase seafood from Bayou Land Seafood until the company agrees to rehire Olivia.” Additionally, advocates have drafted a Forced Labor Prevention Accord, which would commit employers to an explicit ban on blacklisting and establish a dispute resolution process, allowing for binding arbitration if there is an impasse.

The use of retaliation and coercion is rife in all forms of marginalized, low-wage work. But for guestworkers, employers act as global gatekeepers. According to a 2012 NGA report on labor conditions in the Walmart’s supply chain, major labor violations were found in twelve of eighteen suppliers surveyed. But the scope of the problem is unclear because workers “generally under-report workplace violations out of fear of retaliation and blacklisting.”

A separate survey of guestworkers from various countries, working in agriculture and food processing, described economic and structural deterrents to challenging employers, including “debts related to recruitment, visa, and transportation costs; visas tied to their employer; and retaliation including threats of deportation.”

The campaign behind the Forced Labor Prevention Agreement, according to NGA lead organizer Jacob Horwitz, reinforces existing law and empowers the workforce by instituting accountability across the supply chain, particularly through the support of major buyers. And by protecting workers from retaliation for initiating a formal complaint, the agreement would allow them to stay employed while pressing their legal claims at the same workplace, “without giving employers the weapon of using the border to silence complaints.”

Whatever happens at Bayou Land, Guzman says, “I’m going to keep going forward and fighting for the rights of all my coworkers, so that we can overcome this kind of coercion and oppression on the job, so that we can come forward and report abuse when it happens to us, with a guarantee that we’ll be able to keep working, without being afraid.”

The fact that Guzman journeyed all the way from Sinaloa to Lousiana to seek justice should show employers that no intimidation or blacklisting—not even an international border—can stop the most fearless workers from standing up for their rights on American soil.