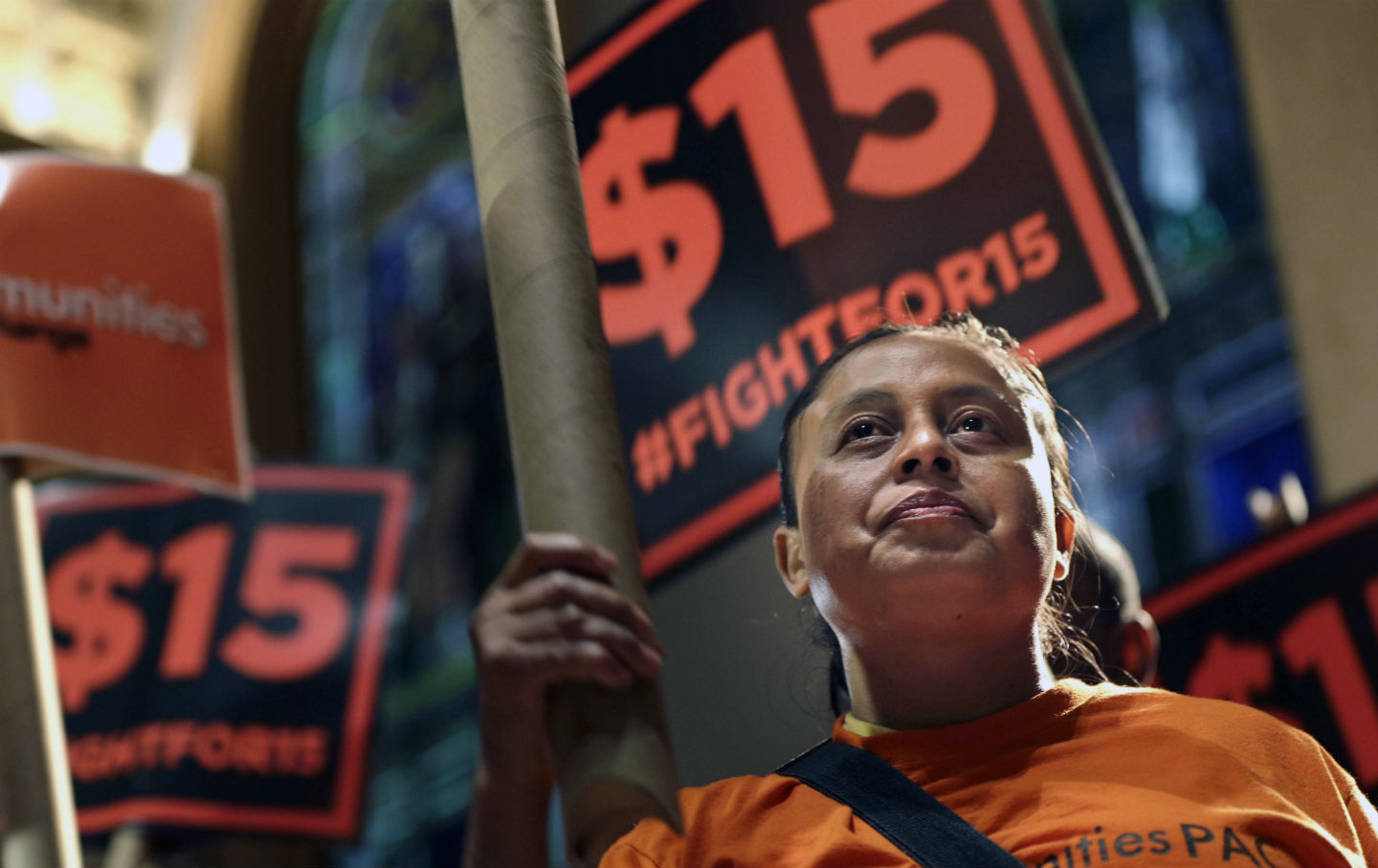 Demonstrators rally before a meeting of the wage board in New York, June 15, 2015. (AP Photo / Seth Wenig)

They could have gone on for days, telling their stories about the day-to-day stresses, like choosing between eating and keeping the lights on, taking on a night shift to pay for daycare, or maybe skipping lunch so your kids can eat today. The New York State Labor Department’s fast-food wage board heard many workers on Monday talk about the creative ways they survived on fast food wages in the city, but all of these stories concluded with a simple demand: $15 an hour.

Julia Andino, a 20-year-old single mother with tired eyes, said her job at McDonald’s paid so little, she had to “pick and choose what bills you have to go through.” Her application for public assistance had been rejected, she added, because, she was told, “I was able to pick up a second job if needed. I can’t do it. My son’s only 3…. How are you supposed to get two jobs, go to school, try to pay your bills, but no one’s home, feeding and taking care of your kid? It’s impossible.”

Not long ago, $15 an hour for a “burger-flipping” gig would have sounded impossible too. But now, pressed by a nationwide grassroots labor movement, Governor Andrew Cuomo’s wage board is potentially poised to nearly double the base wage for a fast-food labor force of nearly 165,000 people statewide.

The hearing at New York University sometimes had the feel of a group therapy session, as workers described their day-to-day misery before the panel—comprised of three appointees representing labor, business, and civil society—and their movement compatriots murmured supportive words from the audience.

Under crushing financial pressure, some of Julia’s coworkers were prone to anxiety attacks at work she said: “If you would ask me what I’d do tomorrow, I wouldn’t even tell you, I can’t survive today.”

Following a groundbreaking $15 minimum-wage law that just passed in Los Angeles, a pay raise couldn’t come soon enough for New York’s fast-food workers, who earn on average under $16,000 a year. Contrary to stereotypes, most have at least a high school–level education, and more than 85 percent are aged 19 or older.

Back in 2012, the first fast-food-worker activists in New York were ridiculed for demanding a living wage. Now that the call for “15 and a Union” has ricocheted around the world and returned to its home turf, that isn’t just a viable proposal, it seems like low-hanging political fruit: Given the dysfunctional gridlock in Albany, a big wage boost might be seen as a relatively easy populist measure for the Governor, since the wage board lets him bypass the legislature.

Gov. Cuomo’s wage board is potentially poised to nearly double the base wage for nearly 165,000 people statewide.

“One week you may get eight hours, one week you may get 30. There’s no security, which is why we’re not just fighting for $15 an hour but a union, so we…don’t have to guess every week whether you’re going to be able to pay your bills.”

The wage board is only concerned with pay scales, not unionization, but advocates hope a minimum-wage hike will advance the movement to organize the sector. Though the decentralized franchise model hampers wide-scale organizing, recent legal actions against McDonald’s labor practices have raised the prospect of corporations being formally held accountable as joint employers.

Irene Tung, senior researcher at National Employment Law Project (NELP), told the Belabored podcast, a wage-board win would boost momentum for unionization—just as the campaign for a shorter workday galvanized the labor movement a century ago.

“The movement came first, involving large numbers of workers cutting their teeth and building leadership from that call for an 8-hour workday, and then after that we saw an explosion in membership in unions…. The Fight for 15 is absolutely a stepping stone towards more unionization in sectors like fast food, hopefully.”

With or without a union, the Fight for 15 movement has buoyed the SEIU, which has sponsored the protest campaigns and now seeks to spread it to other low-wage sectors, like home healthcare.

Though business representatives warn $15 per hour would eat into the bottom line, progressive economists say the industry could readily absorb the higher wage with no significant impact on profits.

Yet it’s not just a question of what industry can afford; it’s what the industry owes workers. According to NELP, as the fast-food workforce has grown, so too has the gap between massive corporate revenue streams and the weak trickle-down in workers’ wages:

The fourteen largest publicly-traded fast food restaurant chains operating in New York State together reaped… an increase in real profits of 14.5 percent between 2010 and 2014; during that same period, real wages for New York State’s fast food workers declined by 3.6 percent.

New York City workers are hit from all sides: ultra-low wages and unstable schedules at work, sky-high rents in gentrifying communities, and dwindling options for sustainable employment in burgeoning service industries like retail and restaurants. Not even $15 will cut it, actually: a family of two in Brooklyn needs more than $21 an hour to cover basic needs.

Some of the loudest voices at the hearing weren’t testifying; they spoke through the hush that fell over the room when Corey Brasil paused to fight back tears. The 22 year-old Dominos worker recounted his responsibilities as his family’s main breadwinner. His little brother, a basketball player, would be counting on him to buy him new sneakers. And Corey was starting school in August, “with the hope that things will get better later on.” Maybe by then, his fast-food job will pay enough to not leave him worrying about his next meal.

After collecting himself—ringed by words of encouragement from fellow workers—he continued, “I’m not saying that $15 is perfect, but as of right now, it’s pretty good enough. So what I’m asking you is that you’ll decide to give us the $15—not just for us, but for our families. Because we don’t just need it. They need it.”