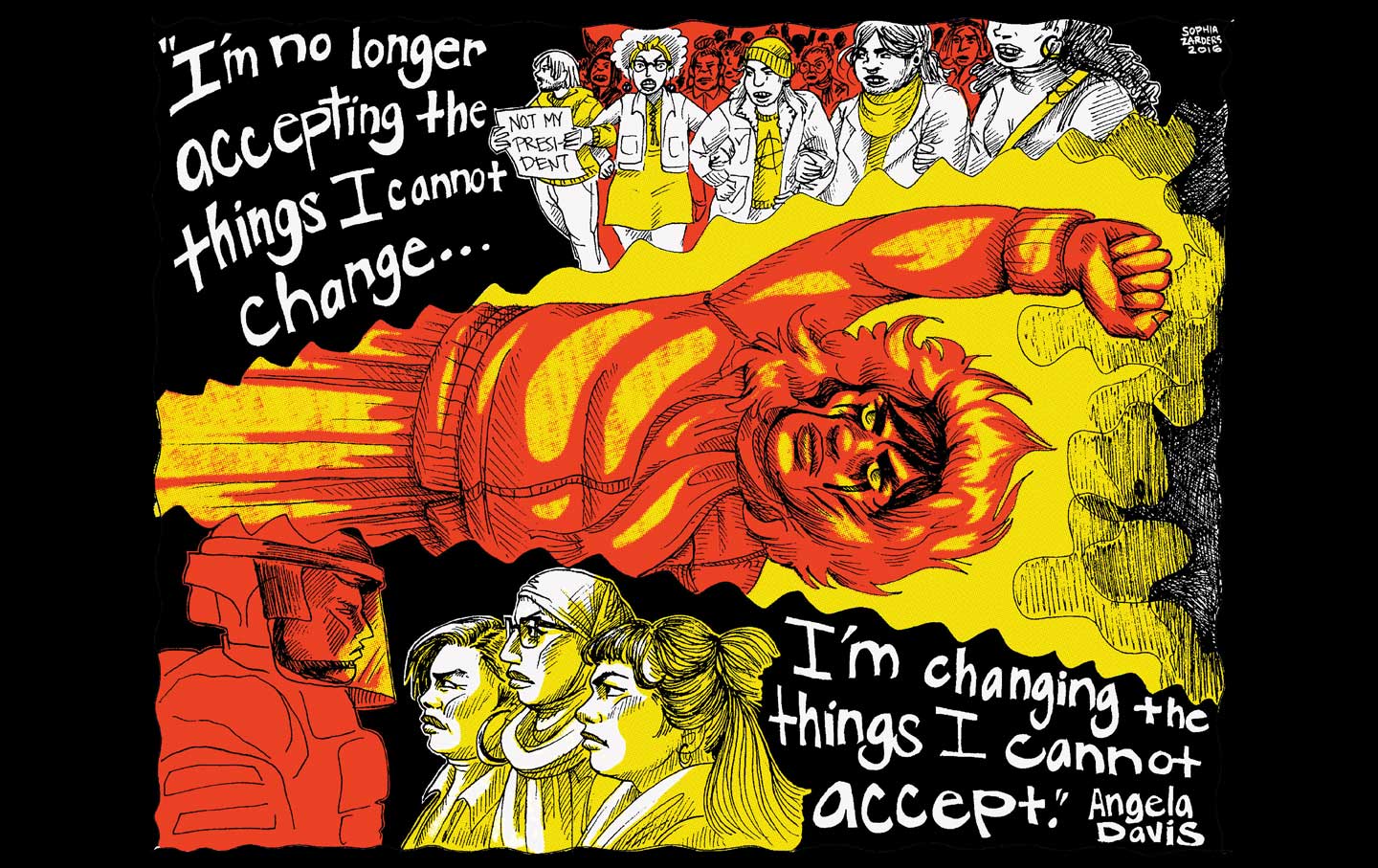 Of what use is art? It’s a question often asked in societies where money is the prime measure of worth, usually by people who do not understand art—and therefore dislike it and the artists who make it. Now, however, the question is being posed by artists themselves.

For American writers and other artists, there’s a distinct chill in the air. Strongmen have a well-earned reputation for suppression and for demanding fawning tributes: “Suck up or shut up” has been their rule. During the Cold War, many writers, filmmakers, and playwrights received visits from the FBI on suspicion of “un-American activities.” Will that history be repeated? Will self-censorship set in? Could we be entering an age of samizdat in the United States, with manuscripts circulating secretly because publishing them would mean inviting reprisal? That sounds extreme, but considering America’s own history—and the wave of authoritarian governments sweeping the globe—it’s not out of the question.

In the face of such uncertainties and fears, the creative communities of the United States are nervously urging one another not to surrender without a fight: Don’t give up! Write your book! Make your art!

But what to write or make? Fifty years from now, what will be said about the art and writing of this era? The Great Depression was immortalized by John Steinbeck’s Grapes of Wrath, which described in detail what the Dust Bowl years felt like to those living through them at the lowest level of American society. Arthur Miller’s play The Crucible provided an apt metaphor for McCarthyism, with its witch hunts and mass accusations. Klaus Mann’s 1936 novel Mephisto, about the rise of a famous actor, showed absolute power corrupting an artist absolutely—a fitting story during the reign of Hitler. What sorts of novels, poems, films, television series, video games, paintings, music, or graphic novels will adequately reflect America’s next decade?

We don’t have any idea yet. We can’t: Nothing is predictable except unpredictability. It’s probably fair to say, however, that Donald Trump’s interest in the arts, gauged on a scale from one to 100, is somewhere between zero and negative 10—lower than any president in the last 50 years. Some of those presidents didn’t give a hoot about the arts, but at least they found it politic to pretend. Trump won’t. In fact, he may not even notice they’re there.

As isolated individuals, artists are especially subject to authoritarian pressures.

This might, in fact, work to our advantage. Stalin and Hitler took an interest in the arts and considered themselves experts and arbiters, which was very bad news for the writers and artists whose styles displeased the authorities. These got packed off to the gulag or condemned as degenerate. Hopefully, most creative people will find themselves flying under the radar, so insignificant as to escape detection.

The United States has no gulags. It prefers to express displeasure through behind-the-scenes blackballing: The screenwriter’s phone doesn’t ring, as it didn’t for the Hollywood Ten; the musician’s songs go unplayed, as Buffy Sainte-Marie’s were during the Vietnam War, because of her song “Universal Soldier”; the writer’s book fails to find a publisher, as was the case, for many years, with Marilyn French’s From Eve to Dawn: A History of Women in the World. A change in the overall cultural climate may well be expected, with rewards of various kinds flowing to those willing to ride along in the wake of the incumbent powerboat, and quiet punishments meted out to those who refuse. Those reprisals may take the form of noxious POTUS tweets—like the recent one in which Trump kicked his Celebrity Apprentice successor, Arnold Schwarzenegger, right in the ratings—or vulgar public denunciations, like his dismissal of Meryl Streep after her Golden Globes speech implicitly criticized Trump as a bully.

Margaret Atwood argues that artists have a profound role to play in speaking truth to power and expressing what it is to be human. The following organizations exist to help them do just that:

PEN: A worldwide association of poets, editors, and novelists that promotes the freedom to write, with local chapters across the United States. pen.org

City of Asylum: A Pittsburgh-based organization that provides sanctuary to endangered writers from around the world. cityofasylum.org

And what will happen to freedom of speech, that hallmark of American democracy? Will the very idea become a euphemism for hate speech and Internet bullying, a hammer to whack “political correctness”? That has already begun. If it intensifies, will those defending the concept of free speech then be attacked from the left as collaborators with fascists?

Surely we can look to the artists to  uphold our better values! Don’t they represent the most noble features of the human spirit? Not necessarily. Creative people come in many makes and models. Some are merely paid entertainers, opportunists out to make a million bucks. Some have more sinister agendas. There’s nothing inherently sacred about films and pictures and writers and books. Mein Kampf was a book.

Plenty of creative people in the past have rolled over for the powerful. In fact, they’re especially subject to authoritarian pressures because, as isolated individuals, they’re very easy to pick off. No armed militia of painters protects them; no underground mafia of screenwriters will put a horse’s head in your bed if you cross them. Those under attack may be defended verbally by other artists, but such defense counts for little if a ruthless establishment is bent on their destruction. The pen is mightier than the sword, but only in retrospect: At the time of combat, those with the swords generally win. But this is America; it has a long and honorable history of resistance. And its multivoiced and multifaceted variety will itself be some defense.

There will, of course, be protest movements, and artists and writers will be urged to join them. It will be their moral duty—or so they will be told—to lend their voices to the cause. (Artists are always being lectured on their moral duty, a fate other professionals—dentists, for example—generally avoid.) But it’s tricky telling creative people what to create or demanding that their art serve a high-minded agenda crafted by others. Those among them who follow such hortatory instructions are likely to produce mere propaganda or two-dimensional allegory—tedious sermonizing either way. The art galleries of the mediocre are wallpapered with good intentions.

What then? What sort of genuine artistic response might be possible? Maybe social satire. Perhaps someone will attempt the equivalent of Jonathan Swift’s “A Modest Proposal,” which suggested the consumption of babies as an economic solution to Irish poverty. But satire, alas, tends to falls flat when reality exceeds even the wildest exaggerations of the imagination—as it is increasingly doing today.

Science fiction, fantasy, and speculative fiction have often been used to register protest in times of political pressure. They have told the truth, but told it slant, as Yevgeny Zamyatin did in his 1924 novel We, which anticipated the Soviet repressions to come. Many American writers took to science fiction in the McCarthy years because it allowed them to criticize their society without being too easily spotted by the powers intent on quashing criticism.

Some will produce “witness art,” like those artists who have responded to great catastrophes: wars, earthquakes, genocides. Surely the journal-keepers are already at work, inscribing events and their responses to them, like those who kept accounts of the Black Death until they themselves succumbed to it; or like Anne Frank, writing her diary from her attic hiding place; or like Samuel Pepys, who wrote down what happened during the Great Fire of London. Works of simple witnessing can be intensely powerful, like Nawal El Sadaawi’s Memoirs From the Women’s Prison, about her time behind bars in Anwar Sadat’s Egypt, or Yan Lianke’s Four Books, which chronicles the famines and mass deaths in China during the Great Leap Forward. American artists and writers have seldom been shy about exploring the fissures and cracks in their own country. Let’s hope that if democracy implodes and free speech is suppressed, someone will record the process as it unfolds.

In the short run, perhaps all we can expect  from artists is only what we have always expected. As once-solid certainties crumble, it may be enough to cultivate your own artistic garden—to do what you can as well as you can for as long as you can do it; to create alternate worlds that offer both temporary escapes and moments of insight; to open windows in the given world that allow us to see outside it.

With the Trump era upon us, it’s the artists and writers who can remind us, in times of crisis or panic, that each one of us is more than just a vote, a statistic. Lives may be deformed by politics—and many certainly have been—but we are not, finally, the sum of our politicians. Throughout history, it has been hope for artistic work that expresses, for this time and place, as powerfully and eloquently as possible, what it is to be human.