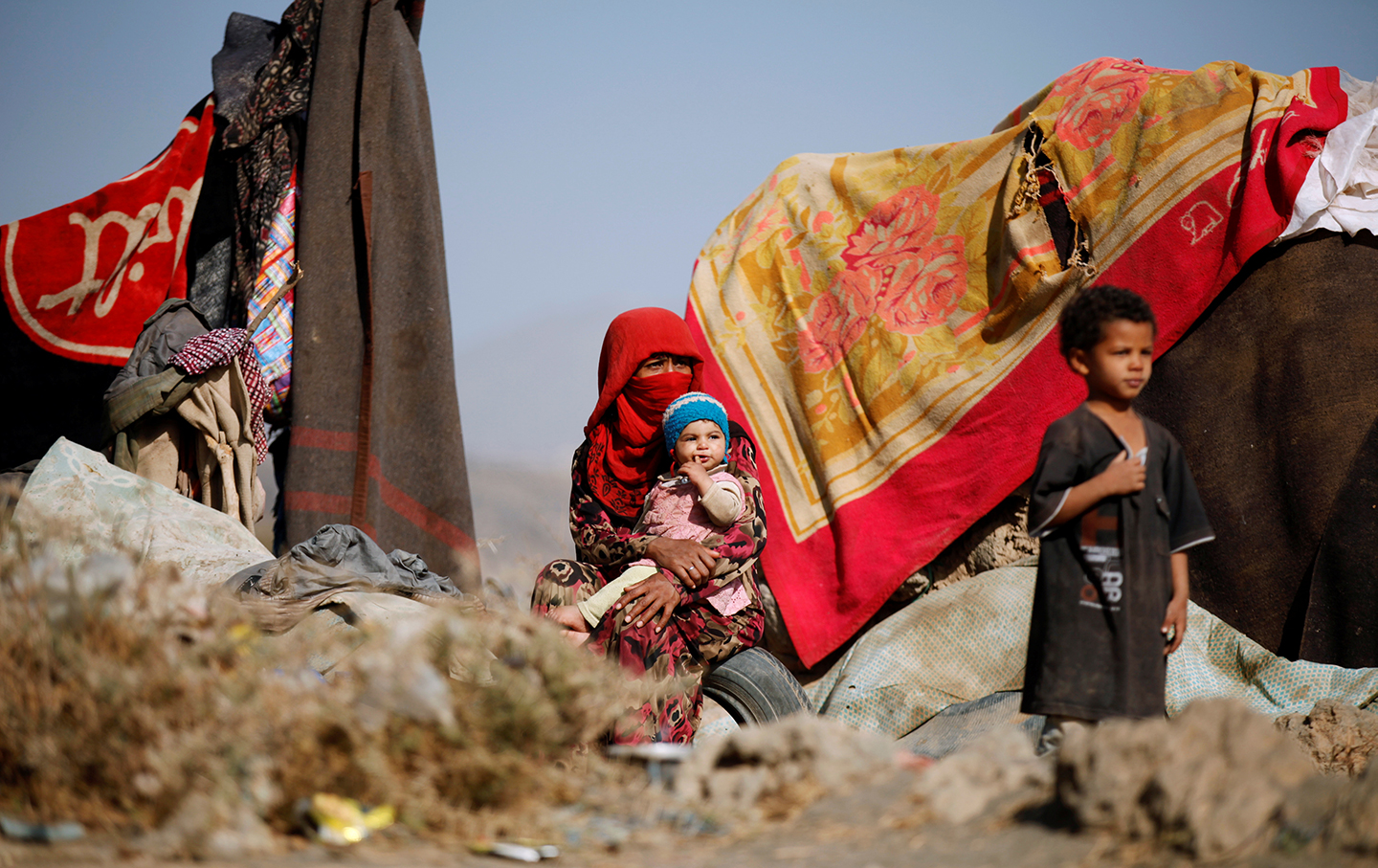 A woman sits with her children at a camp for internally displaced people in Dharawan, near the capital of Sanaa, Yemen, February 28, 2017. (Reuters / Khaled Abdullah)

The Trump administration is sending signals that it is interested in getting more involved in the Yemen war. Those American voters who saw Trump as an isolationist or antiwar candidate appear to be in for a set of big disappointments. The Yemen conflict is a civil war, with Saudi Arabia and its allies giving air support to the rump government of Abdu Rabbu Mansour Hadi in the south, which is seeking to dislodge from northern Yemen the rival government run by the Houthi militia. The war has created a humanitarian crisis in the country, pushing millions to the brink of hunger, and there is no universe in which further American involvement will redound to Washington’s credit. Trump’s interest is driven in part by Saudi propaganda that the Houthis are Iran-backed.1

Famine Could Kill 20 Million in Africa and Yemen—Why the Deafening Silence?

Last week, General Joseph Votel testified for the Pentagon before Congress, insisting that Yemen is key to US security. He pointed out that it sits astride the Bab al-Mandeb strait at the mouth of the Red Sea, and could be used by a hostile power to interrupt sea traffic in that key body of water, through which about 10 percent of world trade flows. Arguably, however, it is the war itself that poses the biggest threat to maritime security in the region. In mid-March, what appear to have been Saudi helicopter gunships mistakenly attacked a boatload of Somali refugees fleeing Yemen for Sudan, killing some 40.2

Votel also pointed to the danger emanating from the Yemen-based Al Qaeda in the Arabian Peninsula. The Yemeni press reports that the United States is regularly bombing and droning AQAP there. The murky Yemen civil war, however, is treacherous ground for a superpower. The first significant US military operation in Yemen under Trump was a January 29 raid on an alleged AQAP camp in al-Gheel in southern Bayda Province, in the course of which as many as 30 civilian noncombatants, including children, and one Navy Seal were killed. The main target, Abd al-Rauf al-Dhahab, however, has switched back and forth between allying with Al Qaeda and with the government of Mansour Hadi. He had recently been enlisted by the latter to fight the Houthis. That is, the raid may have been based on old intelligence from before Dhahab’s recent change of allegiance. 3

US ally Saudi Arabia has ignored Al Qaeda’s advances, while the Houthis are sworn enemies of the terrorist group.

Overall, there is a key contradiction in US policy toward AQAP, inasmuch as the Houthis are sworn enemies of the Sunni extremists. In contrast, the Saudi-led coalition has either willy-nilly permitted or has turned a blind eye to Al Qaeda territorial advances in southern Yemen. The coalition appears to have no scruples about recruiting tribal figures with an Al Qaeda past. By crippling the Sana government and supporting the Saudi-led continual and massive bombardment of the country, the Pentagon has actually given Al Qaeda free rein.4

Votel’s testimony comes in the context of a reevaluation of the US military role in Yemen, provoked in part by a memo from national-security adviser H.R. McMaster to Secretary of Defense Jim Mattis. For the past two years, the Obama administration had kept US support to a low level, mainly logistics and advice on targeting. McMaster and Mattis appear to feel that Iran has become too powerful in Yemen as a result. The next big push by the Saudi coalition will be on the Red Sea port of Hodeida, which is in Houthi hands and is key to supplying the capital. The Trump administration appears to be considering more extensive military help to the Saudis in this battle. Hodeida is also, however, how millions of Yemenis get their staples, and the United States could be signing on to an artificially produced famine.5

Both McMaster and Mattis are Iraq War veterans, and both were conditioned by that experience to see rising Iranian soft power in the region as a major threat to the United States. After the Bush administration’s invasion and occupation of Iraq, the country’s Sunni elite was dislodged and crushed. The Shiite majority entered politics and came to dominate parliamentary life, generally seeking a close alliance with Iran. The majority in both Iraq and Iran belong to the Twelver Shiite branch of Islam, and Iran had close relations with Shiite militias such as the Badr Corps and the League of the Righteous. Although Badr had an alliance of convenience with the United States, the League of the Righteous clashed with US troops. 6

The US officer corps was sometimes not well informed about Iraqi dynamics and came to see all the Shiite militias as Iranian cat’s paws, even though the Mahdi Army of cleric Muqtada al-Sadr took a stance of Iraqi nativism generally hostile to Iran. In any case, it was, ironically, Bush administration policy in Iraq that ensconced the Shiites in power and gave Iran an opening to gain powerful new friends in the region. It is worrying that Mattis appears so obsessed with conspiracy theories about Iran that he believes Tehran created ISIL (the Islamic State, also known as ISIS or Daesh) as a pretext for a more robust Iranian intervention in Iraq. In fact, of course, ISIL is a vehicle for some disgruntled hyper-Sunni Iraqis who believed Iran was colonizing their Iraq. ISIL has repeatedly massacred Shiites and has attacked and threatened Iran.7

McMaster and Mattis may be reading Yemen through an Iraq-Iran lens. That would be a mistake. The Zaydi branch of Shiite Islam in Yemen, followed by about a third of the population, does not much resemble Iranian Shiism. It has a history of ecumenism with Sunnis and has no ayatollahs. The Houthi movement springs from Zaydism in the country’s north, and began as a protest against the increasing influence in Yemen of Saudi Arabia and its hard-line, rabidly anti-Shiite form of Islam, Wahhabism. Houthis also felt that the Yemeni government was oppressing the hardscrabble northern tribes while neglecting the region economically. 8

When the 2011 youth revolts broke out in the Arab world, Yemenis joined in, though in that country tribal groups such as the Houthis played a prominent role. President Ali Abdullah Saleh was deposed in January 2012, and the opposition and the ruling party both agreed to put his vice president, Abdu Rabbu Mansour Hadi, up for the presidency by referendum. He won 80 percent of the vote, and brought opposition groups into his cabinet. A political process began, and the government began to hammer out a new constitution. 9

Then, in September 2014, the Houthis forestalled this process by marching into the capital, Sana, and taking over. They were secretly aided by deposed president Saleh and by the military forces still loyal to him, gaining huge stockpiles of American-supplied weaponry by virtue of this alliance. By early 2015, Mansour Hadi had to flee. Many tribes, including Sunni ones, rallied to the Houthis. That spring, the Saudis and their allies began bombing. The Houthi takeover was in some important respects a Saleh countercoup, aided by a regional revolt. One of the main targets of Saudi bombing has been the town of Saadeh, the place where the Houthi movement began. 10

Iran may have sent the Houthis small sums of money, but most of the movement’s arms are American, from Saleh-controlled depots, and most of its support is rooted in north Yemeni resentment of growing Saudi and Wahhabi hegemony, not only among Zaydis but also among some Sunni tribes (most Yemeni Sunnis dislike Wahhabism). The Saudi air campaign, which has often indiscriminately targeted schools, hospitals, cultural institutions, and key civilian infrastructure such as bridges and ports, has made Riyadh thoroughly hated in the north. In late March, Sana residents held a massive demonstration of hundreds of thousands against the Saudi bombing. It is, however, entirely possible that were the United States to take on a more visible role in support of the Saudis in Yemen, the Houthis and their allies may feel they have no choice but to ally more closely with Iran.11

For American officers shaped by the Iraq War to project their conspiracy theories about Iran’s role in Baghdad onto the Yemen civil war would be a blunder of huge proportions. It was, after all, not Iran but the policies of the US occupation authorities that led to the creation of ISIL, as a Sunni backlash to their mismanagement of Iraq. Iraq will be in shambles, contributing to regional chaos and to a refugee crisis that has roiled the NATO countries of Europe, for perhaps decades as a result. Compounding the regional chaos by blundering into rugged, little-understood Yemen essentially as a military auxiliary of Saudi Wahhabism will worsen, not improve, US security.12