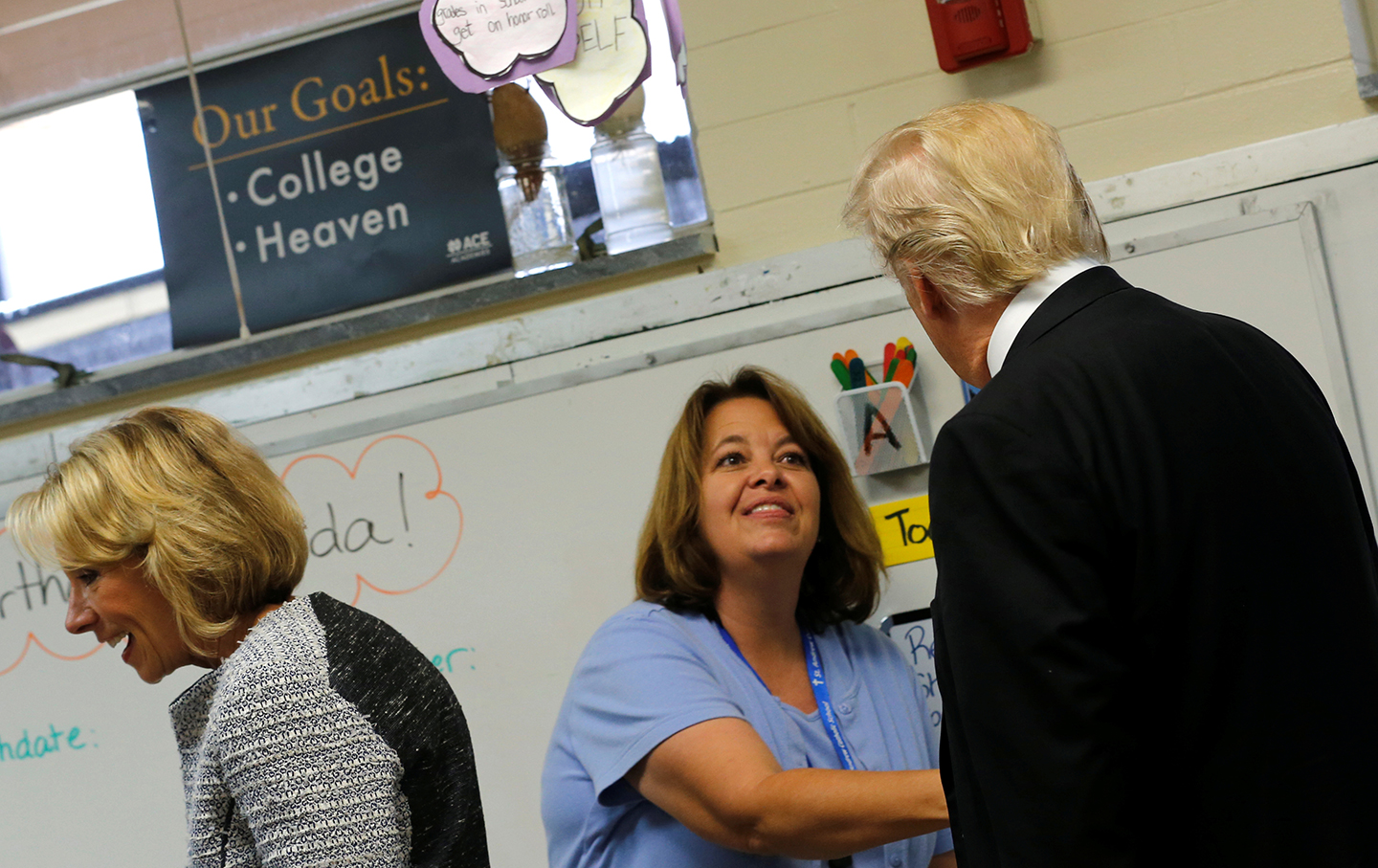 Remember when candidate Trump promised to make college affordable for everyone? Yeah, that’s not happening.  1

Instead, Trump is turning to the notorious corporateers who have been pouring McDiplomas on the nation’s steaming trillion-dollar student debt pyre to shake up higher education.2

Education Secretary Betsy DeVos’s controversial pick for a special assistant—for-profit college corporate lawyer Robert Eitel, may be a portent. As counsel for Bridgepoint, the parent company of the now-tainted brands of Ashford University and University of the Rockies, was forced by the Obama administration last year to refund $24 million in tuition and debt costs to students, plus civil damages, after the Consumer Financial Protection Bureau found that its heavy marketing scheme for its online programs, and “deceived its students into taking out loans that cost more than advertised.”3

Bridgepoint is just one player in a sector of for-profit institutions that are known for exploiting millions in federal loans and grants, providing substandard academics and granting worthless diplomas. While many companies were reined in by regulators under Obama, the industry as a whole has survived, and is now poised for revival under Trump. In fact, even those companies penalized for defrauding students have not been held fully accountable over federal student debts; Bridgepoint’s sanction, for example, did not encompass federal loans, even though graduates are typically chained to about $33,000 in taxpayer-subsidized debt.4

But the for-profit college companies hobbled by financial crisis under Obama might see a major resurrection under Trump’s and DeVos’s deregulatory agenda.5

One tactic may be for belly-up for-profits to reinvent themselves as nonprofits, in order to skirt future regulations and wriggle out of liability for financial abuses. The Corinthian college chain, for example, following bankruptcy, was placed under the control of a nominal “nonprofit” called Zenith (which was later exposed for having compromising financial entanglements despite purporting to act as an independent monitor). Yet countless former students remain trapped in devastating debt, after regulatory pressure and lawsuits forced the company into bankruptcy and left over 15,000 in the lurch as campuses were shuttered nationwide. Despite their ongoing financial strife and an angry debt strike campaign led by the Debt Collective, the Obama administration never provided full debt relief. And with education policy controlled by a billionaire who himself has dabbled in the education-marketing industry with the shuttered Trump University, there’s no relief in sight for current debt holders and even worse prospects for meaningful protections for future student debtors.6

The Debt Collective calls the tactic a regulatory dodge and a genius branding move:8

Critics warn that further blurring church/state, along with profit/nonprofit, divides could open the door to more public financing of religious schooling. Though DeVos has not so far emphasized direct federal funding for religious schools, she may find more fertile terrain for faith-based federal funding in higher education. In the more standardized K-12 system, siphoning funds into Christian school vouchers could encounter constitutional disputes. Many Christian-based private colleges and universities already receive ample taxpayer support through federal grants and loans.10

Since the enactment of the GI Bill for veterans, commercial vocational schools and colleges have been mass-marketing cheap, easy degrees—often to socially and economically disadvantaged students in working-class communities and communities of color. One of the most spectacular bankruptcies last year, the ITT college chain, actually made headlines back in 1974 after being exposed as a cesspool of substandard programs with low retention and abysmal job-placement rates. The Century Foundation (TCF) warns in its historical investigation of for-profit higher education, the systematic abuses aren’t a bug, but a feature. Since the interest of for-profit colleges is by definition maximizing profits, “which means they have a strong drive to charge as much as the federal government will allow, to spend as little on education they can get away with, and to enroll as many students as possible regardless of their qualifications.”12

Given Trump’s single-minded determination to unravel any and all financial regulations, the next boom-bust cycle in for-profit higher education could be even more devastating, says TCF analyst Bob Shireman via e-mail, warning that tactics like conversion to nonprofit status could worsen the deregulatory spiral:13

Nonprofits are accountable to representatives of the public…[and] are prohibited from having a financial stake. For-profits are the opposite: by design, their assets are committed to private parties who also control the enterprise…. Every difference evident in the behavior of for-profit versus nonprofit colleges stems from that difference in internal accountability. The dream of the for-profit school industry is for the Department of Education to pretend that that these differences in corporate accountability requirements do not exist.14

Shireman observes that if the White House actively encourages the industry’s profiteering, the responsibility of checking the excesses of for-profit-college schemes will fall to the states and citizens: “[T]he danger at the federal level is both reduced regulations and reduced oversight/enforcement…. Even with staff, the feds can treat violations with warnings or meager fines.”15

Under this epidemic of “regulatory capture,” he adds, “To counter the possible reduction in the quantity or quality of federal oversight, states can bolster their rules and enforcement, as they have with relatively strong financial reforms in California and New York.”16

And for those at the heart of the crisis, legions of financially devastated students agitating for financial relief, be it through student-debt strikes or by pressing for regulatory reforms, can fuel momentum for the real educational promise the country’s students deserve: free public higher education for all—because the only fair market price for a human right is free.17