Bicycle commuters, sparse in numbers, pass through a tunnel as military tanks are positioned above on the overpass in Beijing, China, two days after the Tiananmen Square massacre, on June 6, 1989. (AP Photo / Vincent Yu)

“Young lovers from China!” a smiling sales lady said as she approached Yu Dongyue and me in a mall on a rainy afternoon in February. It took me a moment to realize that Yu could be taken as an ordinary man with a girlfriend. Yu’s hat covered the scar that he received from brutal beatings. No one could have guessed that he was suffering from severe trauma and mental disorders after 16 years of incarceration marked by torture and solitary confinement as a political prisoner in China.

I had long featured Yu’s story in my courses on Tiananmen and China, but I’d met him for the first time that day in Indianapolis, where he and his sister settled after escaping China in 2009. In spring 1989, when millions of citizens filled the streets all over China demanding political reforms, Yu was a 21-year-old art editor for the Liuyang Daily, a newspaper in Hunan province. The city of Liuyang also happened to be the hometown of Hu Yaobang, the former secretary general of the Chinese Communist Party (CCP), whose sudden death on April 15, 1989 triggered a nationwide campaign that would become known as the 1989 Tiananmen Movement.

Hu was a proponent of reform, and students saw his passing as an opportunity to renew their push for change. After students launched a hunger strike in Tiananmen Square, Yu Dongyue and two friends, Yu Zhijian and Lu Decheng, traveled to Beijing to join the protests. Boarding the train, the three men, who would become known in Chinese as the Three Gentlemen of Tiananmen, could not have known it would be a one-way trip.

Richard Kreitner and The Almanac

On May 23, 1989, Yu and his two friends threw eggshells filled with paint at Mao’s portrait in Tiananmen Square. Instead of applauding their audacity, the students turned them over to the authorities. The students wanted to keep their protests separate from those of the workers. There was never an attempt to form a grand alliance to overthrow the regime, as Beijing would later assert. The students also feared that if they didn’t hand over the three young men, the government would have an excuse to crack down on them.

Ten days later, Chinese soldiers equipped with tanks and AK-47s attacked, nonetheless. On June 4, some 200,000 People’s Liberation Army soldiers were deployed to participate in the lethal action. Hu’s successor as CCP general secretary, Zhao Ziyang, refused to order the assault and was purged. He lived under house arrest until his death in 2005. Thus, the Tiananmen Movement was bracketed by the death of one CCP secretary general and the expulsion of another. The fate of these two reform-minded CCP leaders foreshadowed China’s development ever since.

The Tiananmen Movement remains a taboo topic in China, banned from academic and popular realms. Even the actual number of the dead and wounded remains unknown. In the immediate aftermath, after mass arrests and purges throughout the country, the CCP constructed a narrative portraying the Tiananmen Movement as a Western conspiracy to weaken and divide China. Reporting to the National People’s Congress on June 30, 1989, Beijing Mayor Chen Xitong asserted that the movement was “planned, organized, and premeditated” by those who “unite with all hostile forces overseas and in foreign countries to launch a battle against us to the last.”

The official justification for the clampdown was that the students were “counterrevolutionaries” who threatened the country’s stability and prosperity. Yet, in 1989, they were hoping the regime would transform itself. They were not seeking regime change, just asking the CCP to live up to its ideals. Their actions were rooted in the Chinese tradition of Confucian dissent—helping the rulers to improve, but not seeking to overthrow them.

Yu’s experiences are a testimony to the non-revolutionary nature of the movement. During my visit, Yu repeated the phrase: “This was not done by the students or the people.” After Yu and his two friends defaced Mao’s portrait, the students at Tiananmen had inscribed that sentence on a banner in order to disavow their vandalism. The three young men had not tried to run away, and they wrongly assumed the students would be on their side.

In the end, the Three Gentlemen and the students faced the same charges of counterrevolution. That was the label CCP officials affixed to those who openly disagreed with them. Since the CCP claimed to represent the revolution, anyone criticizing them could be labeled counterrevolutionary. Today, China accuses its critics of “subverting the state,” but, at its core, it’s the same charge.

Yu Dongyue was sentenced to 20 years, Lu Decheng to 16 years, and Yu Zhijian to life in prison. Lu escaped to Thailand in 2006, and was later granted asylum in Canada. In 2009, Yu Zhijian and his pregnant wife smuggled themselves out together with Yu Dongyue. They hoped that they could get medical treatment for Yu so that he would recover from his mental disability. Yu’s younger sister fled with her brother in order to take care of him. At great personal cost, she left behind her former husband and her child, neither of whom can leave China to be reunited with her. 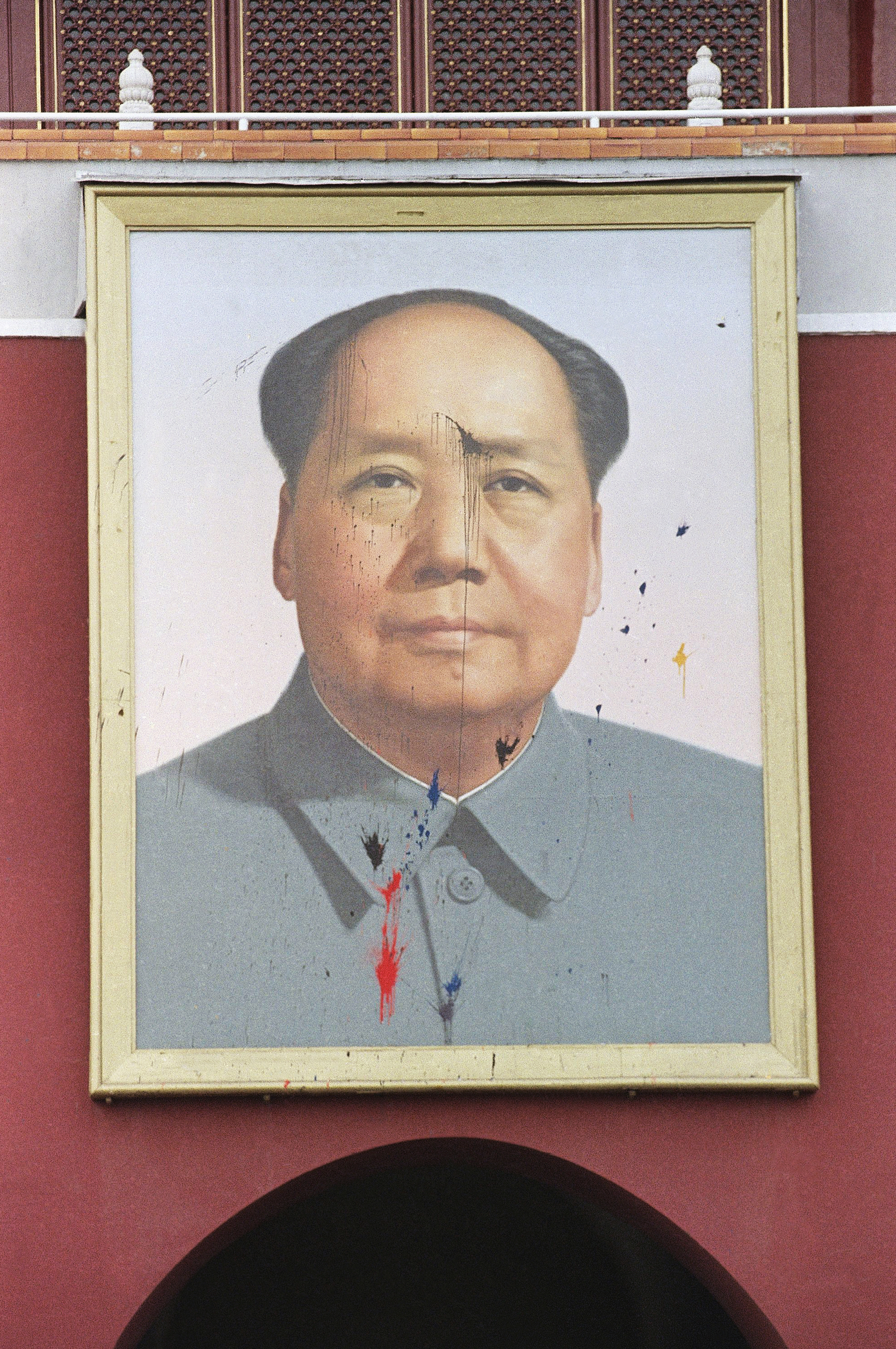 The Three Gentlemen of Tiananmen might not have anticipated the severity of the punishment that they received, but they were not naive about the repression of dissent. Being idealistic in China means being selfish to your loved ones. You choose to fight for your cause, uphold your principles, and stand ready to pay the price—but often family members suffer consequences, too. Prohibiting the children of human-rights lawyers from going to school is a vivid recent example.

Three decades on, the mothers of Tiananmen victims still cannot openly mourn their children, and exiled student protesters are banned from returning home, even for a parent’s funeral. Many older supporters of the movement, liberal intellectuals in the 1980s, died in exile. One of the Three Gentlemen, Yu Zhijian, died in Indianapolis in 2017, at the age of 54.

News of Yu Zhijian’s death was accompanied by a photo of his wife kneeling in front of the cardboard box that held his body. Printed on the makeshift coffin were the words, “Handle with care.” On one Chinese website, a comment in English read: “Garbage dead,” another said simply, “Traitor’s ending.”

For the past 30 years, the CCP has promoted historical amnesia, fostered a narrow and xenophobic nationalism, impeded reflection on historical tragedies and injustice, and stoked a growing enthusiasm for international assertiveness. The recent detentions of young communists on college campuses in China is a reminder that it still doesn’t take much to become a target of the state machinery. Those student leftists were simply doing what the government had told them to do “as successors of the Communist cause.” They formed study groups on Maoism and Marxism, and supported workers’ rights in a state where independent unions are forbidden. But once again, the Communists in power are cracking down on the young communists siding with the powerless.

Since the Tiananmen massacre, activists, scholars, and regular citizens have launched a war against forgetting. Many Tiananmen veterans, both inside and outside China, including Liu Xiaobo, the late Nobel Peace Prize laureate who died a political prisoner in 2017, have devoted their lives to the unfinished cause of 1989. Commemoration activities are organized in major cities every year. Tens of thousands of people gather in Hong Kong’s Victoria Park annually to demand truth and justice for those who were violently silenced in 1989. The image of thousands of people holding candles has become as iconic as the Tank Man, reminding us that Tiananmen is not just about repression—it’s about hope. Tiananmen symbolizes the struggle for freedom and human rights. Because this longing for basic rights is universal, history will witness the Tiananmen spirit again and again.

The Biggest Blue State is Ready to Invest in Its People

The School Board Culture War