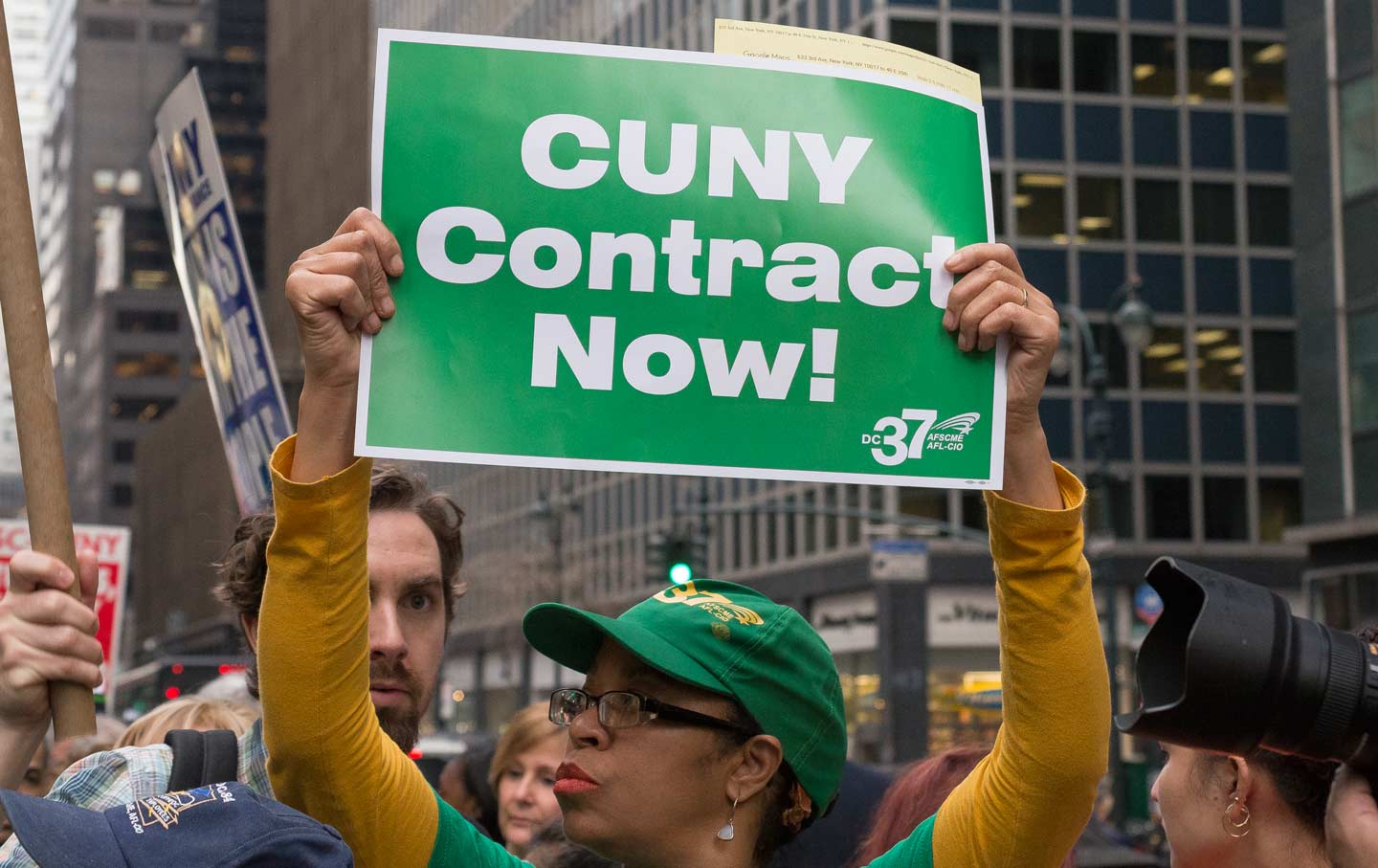 Depending on how you measure achievement, the public higher-education system is either highly dysfunctional or hugely successful. While professors face sinking salaries and students writhe under crushing tuition and debt bills, higher education is a booming business, oozing with investment and research capital. But a close look at faculty compensation shows how labor shapes the political economy of the American campus.

A comprehensive analysis of public-regional-university faculties calculates the difference a union makes: about $21,000 annually in pay and benefits. Average salaries of unionized full-time teachers are approximately 15 percent higher, adding some $11,000 to annual earnings, compared to non-union peers. Their benefits bring in an additional $10,000 on average, roughly a third more than non-union counterparts.

Researchers Stephen Katsinas and Nathaniel Bray of University of Alabama at Tuscaloosa, and Johnson Ogun of University of North Alabama, crunched data for about 390 public regional universities and found that faculties with collective bargaining rights have a distinct advantage. Even accounting for region and institutional size, union-negotiated contracts are linked to markedly higher annual compensation levels, particularly in large suburban regional institutions ($18,500 more annually) and smaller urban institutions ($17,600 more annually), and significantly higher salaries and benefits even at relatively lower-paying rural institutions.

The study doesn’t cover other measures like academic productivity. But consider how union rights and the leverage of a strong contract could change how an institution values academic labor as a long-term institutional investment. According to the study, across a 30-year career at a unionized institution, inflation-adjusted earnings “can easily exceed $1 million.”

Maintaining a strong, dedicated teaching workforce is crucial at regional universities that serve as a middle tier of higher education, with high concentrations of disadvantaged students, such as “first-generation” college attendees. Additionally, researchers observe that these institutions “are highly committed to be good stewards of place,” with a focus on educating and improving the surrounding community’s social conditions (including, for example, uplifting a generation of students in depressed Rust Belt towns seeking brighter career prospects).

For these schools, labor power could have a massive impact on teaching and learning. In terms of a professor’s experience at work, a solid benefits package promotes maintaining a stable and devoted faculty. In an academic labor market reeling from budget deficits and economic volatility, the researchers argue that middle-brow campuses “are challenged, with state budget cuts, to recruit and retain talented faculty.” Meanwhile, the teaching profession is becoming deskilled and mechanized to serve more students with fewer resources. A union contract with job security and top-notch benefits could answer the prayers of many impoverished adjuncts and heavily indebted young doctorates, especially when ultra-prestigious, lavishly funded institutions shut them out of tenure-track positions.

Katsinas also noted that socioeconomic advantages linked to unionization could attract faculty from underrepresented and disadvantaged groups. (The promise of targeted academic workforce funding was demonstrated with the National Defense Education Act’s Title IV program, which in the late 1950s and ’60s brought an unprecedented cadre of blacks and women into professorships through targeted doctoral education funding.)

As schools compete nationally for a shockingly small pool of non–white male aspiring professors, Katsinas says via e-mail, “large gaps in monetary compensation mean that the poorer paying institutions may face a tremendous challenge retaining the few minority faculty they can attract.”

If those schools can develop and sustain scholars of color, their intellectual and cultural presence would be directly deployed in the education of a high-needs student population, which often skews more poor, black, and brown than that of elite private colleges and research universities.

A fair benefits package could also include basic progressive social provisions, such as paid family leave, that both foster fairer working conditions and support women and parents on faculty.

In other words, at a time when affirmative action is under political siege, empowering academic labor can help cultivate and effectively distribute academics from underrepresented groups across the higher education field, while engaging their communities of teachers, students, and workers.

In the absence of comprehensive policy-driven efforts to strengthen diversity and equity in academic labor, unions appear to be the primary line of defense for public institutions struggling with privatization and austerity. The City University of New York’s (where the author has worked as a graduate student) famously militant faculty and staff union, Professional Staff Congress, has in recent weeks edged close to a strike as contract negotiations have reached an intense impasse, centering on long-overdue pay raises. Bringing together all faculty (including struggling graduate fellows and adjuncts) and students, massive protests for both fair pay and equitable funding have decisively challenged proposed budget cuts, despite threats of legal penalties.

The California Faculty Association at California State University has also recently successfully pushed for long-sought wage increases. But an integral part of its months-long campaign was an ongoing, overarching movement for social justice across campus. So labor protests also tackle issues like ensuring access and affordability for low-income students, combating the gender pay gap for faculty, and promoting the hiring of academics of color to better serve a heavily black, Latino, and Asian-American student body.

Jennifer Eagan, president of the California Faculty Association, tells The Nation that while academics usually trade on their individual talents, when it comes to labor issues, “you can have all the best data and arguments, but if you don’t have power, your employer might be free to ignore you.” In the recent contract disputes, she adds, labor and community consciousness converged: “For a lot of the faculty, having that mutual support and solidarity to be able to go fight for fair salaries together,” while emphasizing for the public “how low faculty salaries were starting to negatively impact the system, which is supposed to belong to the people of California…. A lot people really did connect those dots…[showing that] our struggle really had to do with the health of the system, for both current students and future students.”

Public universities are grounded in the project of broadly serving working-class students, and the educational opportunity they potentially steward braces the fulcrum of social mobility. Despite the commercialization of the campus, labor power can shift the higher-education system back to its fundamental mission.