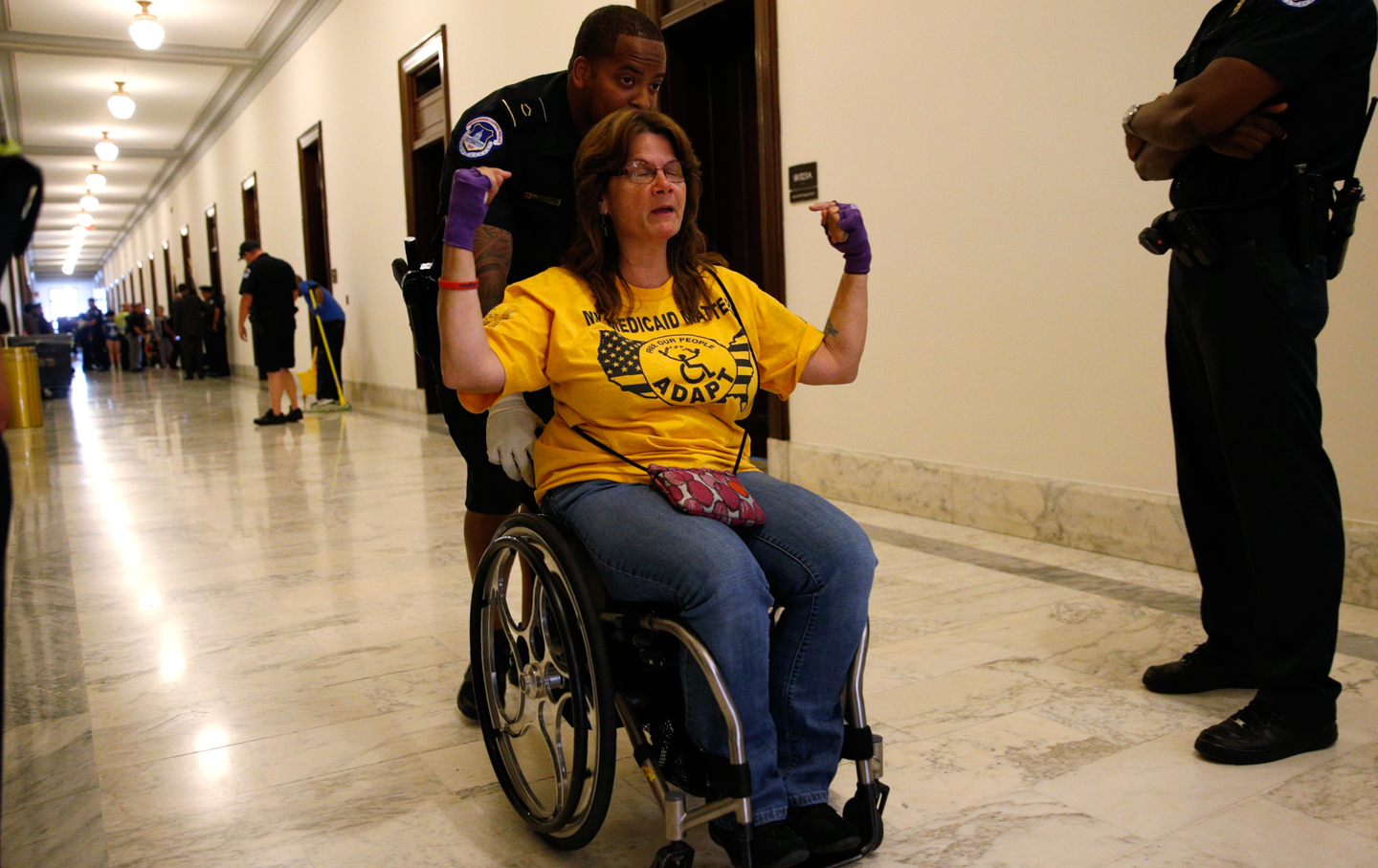 A protester calling for "no cuts to Medicaid" is escorted away outside majority leader Mitch McConnell's office. (Reuters / Kevin Lamarque)

The United States is a rich country, and whether because or in spite of that fact, it treats the poorest and most vulnerable of its people with contempt. The Trump administration’s proposed budget calls for cuts to food-stamp programs that help 43 million people. The Secretary for Housing and Urban Development has made it clear that he doesn’t expect federal housing to be too comfortable and has called poverty a “state of mind.” At a rally in Iowa, Donald Trump declared that “I just don’t want a poor person” serving the country in a cabinet position instead of “brilliant business minds.”

Republicans Spent the Weekend Lying Their Faces Off About Health Care

But nowhere is this contempt for the poor more evident than in health care. This week, the Senate will vote on a bill that, according to the Congressional Budget Office, will lead to 22 million people losing their health coverage in a decade, including 15 million people on Medicaid. The bill also slashes funds for preventive care, allows states to let insurance companies charge more for preexisting conditions, and revokes the requirement to cover maternity and emergency services. The Republican senators who drafted this bill are doing more than reforming health care; they are deciding who deserves to receive it.

How does this bill work? Like the House bill that was narrowly passed in May, the Senate bill makes deep cuts to Medicaid, a program that currently covers 74 million people, or about one in five Americans. These are the poor, the elderly, the disabled, and those who spent their life savings on health care and have no other resources to pay for it. Approximately 64 percent of the people who are currently in nursing homes depend on Medicaid. Without it, they will be left to die. And the bill doesn’t just affect Medicaid; it also makes it easier for states to allow health-care companies to cut maternity care and emergency services. A new baby or a car accident could mean severe financial hardship or even bankruptcy.

Now consider who benefits from this bill. Health-insurance companies will collect premiums from a smaller but somewhat healthier pool of people, without having to deliver as many of the services that many of us take for granted. Health-insurance CEOs will no longer be subject to the nominal tax penalty previously imposed by Obamacare on their salaries. But, most tellingly, this bill includes nearly $1 trillion in tax cuts, about half of which will flow to those who make more than $1 million per year.

In short, the bill provides tax cuts to the rich, and pays for them by taking away health coverage from the poor. It makes an equivalence between affording care and deserving care. It is morally indefensible, which is perhaps why Mitch McConnell wrote it behind closed doors and dodged questions about it until the moment it was unveiled. Doctors and patients were not consulted, nor were women’s groups, advocates for the disabled, or other stakeholders. Media coverage remained anemic—a Media Matters study found that, in the first two weeks of June, the three major broadcast networks gave just three minutes of airtime to the bill. Only when it was published by the Senate Budget Committee on June 22 did it start to attract news attention.

You might think that a piece of legislation that affects the health of millions of Americans and nearly one-sixth of the economy should be debated at length, but McConnell refused to commit to a detailed floor debate about the measure. The rush appears to be part of a tactic to get it swiftly passed: the less Americans know about what’s in the bill, the less likely they are to call their representatives about it.

Currently, I have employer-provided health insurance, and it has paid for things like an emergency-room visit (cooking, shears) and a cancer scare last year, but I still remember what it was like to be uninsured. A few years ago, when my husband was between jobs and I was freelancing, I applied for coverage with Blue Cross Blue Shield and was denied it. I was perfectly healthy: in my 30s, a non-smoker, and with no history of chronic illness in my family. But the paperwork I’d filled out required me to list the date of my last menstrual period, and I had answered, truthfully, that it was more than a year prior because I was still breastfeeding my infant baby. Whether the insurance company didn’t believe me, or whether it deemed a nursing mother a higher risk, I don’t know. But both my husband and my baby were covered, and I was denied. For months, I lived in fear that the slightest health mishap could drive my family into financial ruin.

By contrast, when I was a graduate student in London, I fell ill with a migraine that lasted days, and then weeks. My primary-care doctor couldn’t figure out what was wrong, and neither did the neurologist he referred me to, but another specialist finally diagnosed me with an eye condition. It took nearly two months to figure out what was wrong, during which time I was in so much pain that I couldn’t sleep or read or eat. After a few weeks of therapy, the migraines disappeared. The cost of all this to me was a grand total of zero, thanks to the UK’s National Health Service.

The fundamental problem with health care in the United States is that it is treated as a for-profit enterprise, with little recourse or protection for those who cannot afford it. Obamacare did not change this; it simply tried to accommodate it, and as a result, it created a vastly imperfect system. That system should be improved through the expansion of subsidized components like Medicaid and Medicare, rather than through the major cuts provided for in the disastrous Senate bill.

As we have seen with the original House bill, it is possible to put enough pressure on lawmakers to convince them to change their minds. The 2018 elections are not that far off. Several senators, including Dean Heller of Nevada and Susan Collins of Maine, have already signaled that they will not support the bill in its present form. Given how little media coverage the bill received prior to its unveiling, this is encouraging. Health care is a winnable fight.

Have you called your senator today?