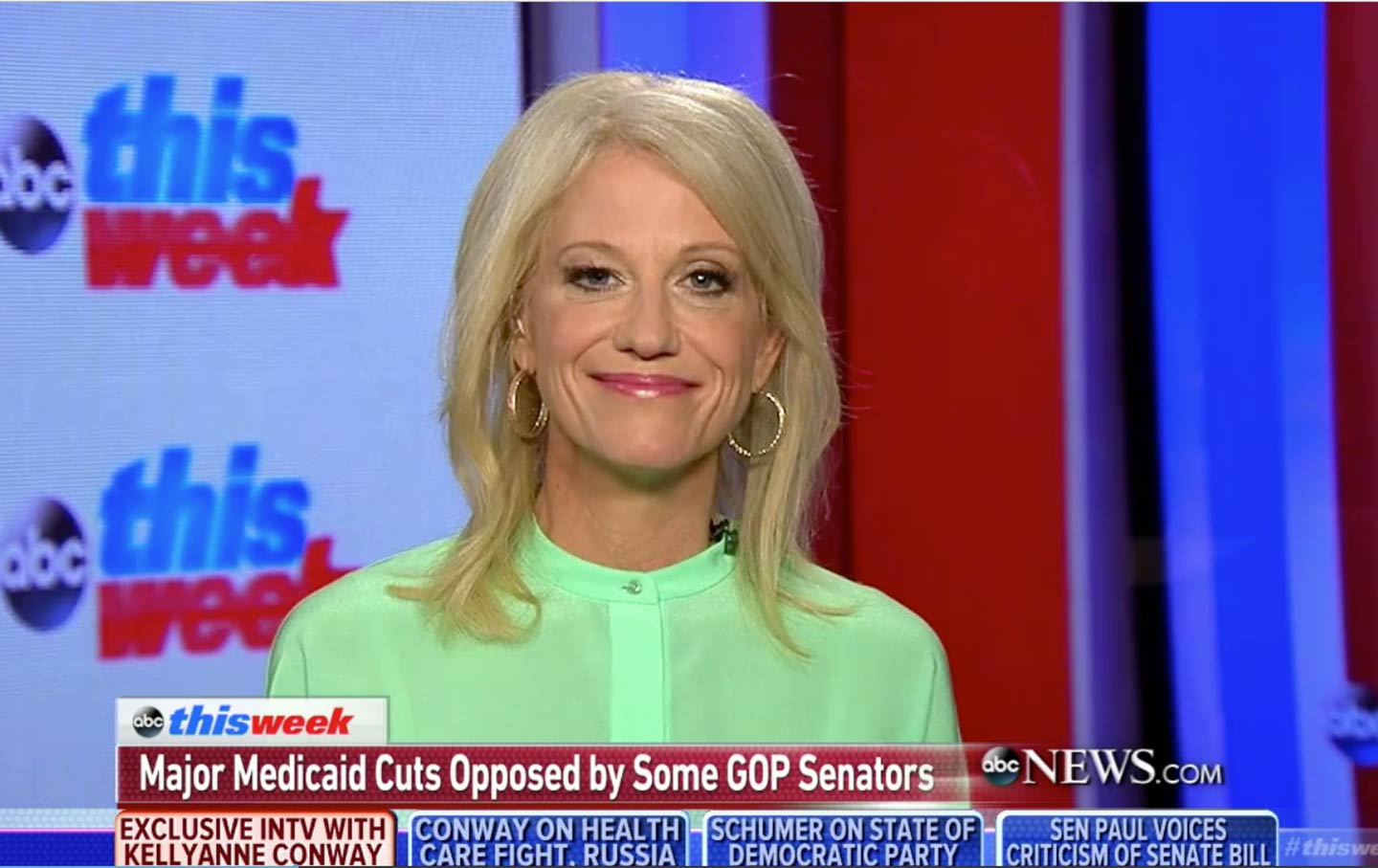 The lies came fast and furious on the Sunday shows this weekend, as Republican lawmakers and their surrogates reckoned with a tough truth: The only way to sell the Senate’s cruel and deeply unpopular health-care bill is to absolutely misrepresent what is in it. And that was before the Congressional Budget Office scored the Senate bill, and found 15 million more people will be uninsured by next year. Which, by the way, is a kind of crucial midterm election year, in which the president’s party almost always loses power.

Those Sunday lies, though, should force journalists to acknowledge another truth: Donald Trump isn’t a rogue Republican; he is making the party over in his image. Before and after Trump’s election, you’ll recall, optimistic Republican leaders predicted that being president might change and sober Trump and that elected GOP leaders could have some influence over the erratic, unprepared commander in chief. But influence seems to have worked the other way: Republicans have seen that Trump can lie without consequence, and they’re trying to make the same approach work for them. It’s not that they’ve never lied before, but this weekend’s Lie-O-Rama was remarkable.

White House Counselor Kellyanne Conway won the prize for lying most brazenly, telling ABC’s This Week that while the bill cuts $800 billion from Medicaid, “These are not cuts to Medicaid.” She then contradicted herself by acknowledging the bill could maybe, possibly cut Medicaid for the “able-bodied,” but insisted: “If they are able-bodied, and they want to work, then they’ll have employer-sponsored benefits like you and I do.”

Of course, 60 percent of able-bodied adults currently on Medicaid already do work, and 80 percent are in households where somebody works—at jobs that don’t provide benefits. The Congressional Budget Office estimated the House bill would throw 14 million Americans off Medicaid over the next 10 years; the Senate bill slashes 15 million patients. Its Medicaid cuts are ultimately deeper, and they both shave and cap funds for the traditional program, not just the Obama expansion. On the same show, Maine GOP Senator Susan Collins contradicted Conway: “I respectfully disagree with her analysis. Based on what I’ve seen, given the inflation rate that would be applied in the outer years to the Medicaid program, the Senate bill is going to have more impact on the Medicaid program than even the House bill.”

On CNN, Health and Human Services Secretary Tom Price might have tied Conway for brazen lying, insisting,”We will not have individuals lose coverage.” The CBO, of course, said the House bill would cost 23 million Americans their health insurance; on Monday the score for the Senate bill said it would cut 22 million. But Price didn’t leave his lies there; he also claimed that “the plan, in its entirety, will absolutely bring prices down.” Maybe he meant tax costs for millionaires? They’ll get a $50,000 tax cut, while the top .01 percent gets a $250,000 tax cut. That’s the only explanation of Price’s claim that makes sense; older Americans, in particular, are going to face higher costs, and lower federal subsidies. (Oh, and also: The tax cuts Price and others defend as “job-creating” will be retroactive to the end of 2016. How do you create jobs in the past?)

Even with all the lying, the Sunday shows were unable to find a single senator who would flat-out defend the bill and commit to supporting it, although many of those who claimed to be on the fence probably are not. Pennsylvania’s Pat Toomey was deeply involved in drafting the bill; on Face the Nation he insisted that Conway is right, and “no one will lose coverage” if they’re on Medicaid. His colleague, Louisiana’s Bill Cassidy, explained that the goal is to move some of the Medicaid recipients to “private insurance,” proving again that the bill is written primarily with the interests of the insurance industry in mind. Cassidy has claimed he would vote against any bill that didn’t meet “the Jimmy Kimmel test,” referring to the comedian’s viral monologue in which he broke down describing his newborn son’s struggle with a congenital heart defect and demanded that no family should have to go without the care that saved his son’s life. But magically, on Thursday, when the bill was released, Cassidy crowed to reporters that the new draft “met the Jimmy Kimmel test.”

Jimmy Kimmel, who happens to be an actual living person, quickly took to Twitter to disagree:

Reminder for Sen @BillCassidy: Kimmel test is “No family should be denied medical care, emerg or otherwise, because they can’t afford it”

But while we’re talking lies, we should also praise the GOP senators who told the truth, at least as they see it. Senator Ron Johnson, another supposed opponent of the bill who will probably cave to McConnell, deserves a prize for the most honest, if unfortunate, explanation of how Republicans look at people with preexisting conditions (including, sadly, Jimmy Kimmel’s infant son). Think of them as people with bad driving records, who are expected to pay higher insurance than safe, careful drivers.

“We’ve done something with our health care system that you would never think about doing, for example, with auto insurance, where you would require auto insurance companies to sell a policy to somebody after they crash their car. States that have…guarantees for preexisting conditions, it crashes their markets,” said Johnson.

So infant Billy Kimmel is like someone who crashed his car, although he can’t even crawl yet, let alone drive. Obviously, he should have been more careful before winding up with congenital heart disease. I’m sorry, that’s not even funny. But this is how they think.

Also on Sunday, Vice President Mike Pence Tweeted that Trumpcare will restore “personal responsibility” to the issue of health care. He was swarmed by people sharing their stories of cancer and other diseases that would now be considered “preexisting conditions” and lock them out of affordable health insurance, lamenting their own lack of “personal responsibility” and the fact that they had the terrible judgment to get sick.

Those stories won’t move Pence, but maybe they’ll move others. Collins professes to be concerned not only about defunding Planned Parenthood—which some argue might be impossible because of arcane Senate rules that come into play because McConnell is using reconciliation to pass this bill—but also steep Medicaid cuts. Alaska’s Lisa Murkowski and West Virginia’s Shelly Moore Capito express similar reservations. The country’s most vulnerable Republican senator, Nevada’s Dean Heller, has come out formally against the bill, in language that makes it hard to imagine he can be bought off, with, say, additional funding for opioid treatment and rural hospitals that might lure Capito and Ohio’s Rob Portman. I would say that, listening to Susan Collins, her objections sound so thoroughgoing, it would be hard to see her vote “yes.” But experience shows that Collins frequently talks compassion and then caves to her leaders and votes for cruelty. We can hope this time is different.

On the right, Utah’s Mike Lee, Texas’s Ted Cruz, Kentucky’s Rand Paul and Ron Johnson all say they are a no, but almost nobody believes them. Paul, though—like Collins and Heller—speaks in such apocalyptic terms about the bill, he almost seems un-gettable. Heller, Paul and Collins are all that’s needed to sink the bill; if they stand strong, they’d probably wind up with more company from the party’s right and centrist flanks. Nobody wants to be the “one” that makes this bill fail, but if it looks like it will fail, expect a stampede to avoid having another Rose Garden party to celebrate legislation that will literally cause thousands of deaths.

Only one thing is certain: Protest is making a difference. Planned Parenthood will storm the Capitol on Tuesday. On Wednesday at five, protesters will form a human chain around the Capitol to demonstrate against the bill. After weeks of quiet, congressional offices are reporting new activism; many Republicans’ voice mail systems are full. The sad defeatism of last week has given way to optimism by Affordable Care Act defenders. But it’s going to take a lot of work to overcome the determination and structural advantages of House Speaker Paul Ryan, McConnell and Trump, as well as their willingness to lie.