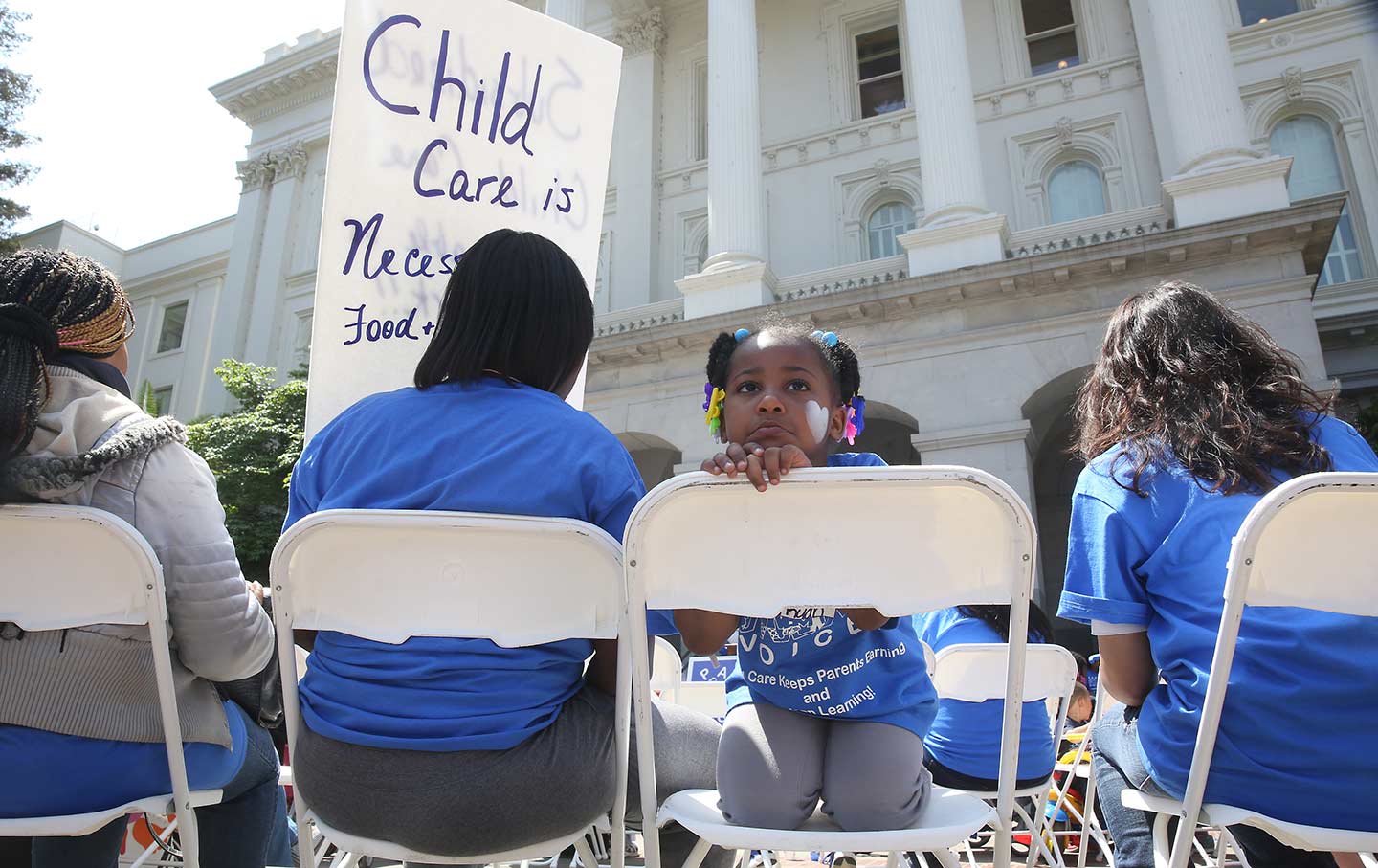 It’s been a quarter of a century since America’s families got their first legal job protections covering time off to care for family medical needs and childbirth. But the kids born under those policies are all grown-up now, and their generation is demanding much more to deal with the caregiving needs of the millennial economy.

Since the Family Medical Leave Act (FMLA)—which provides workers up to 12 weeks of job-protected, unpaid leave—was signed into law by Bill Clinton in 1993, it’s become painfully clear that today’s workforce can’t sustain family needs without more comprehensive benefits. Facing a sink-or-swim economy rife with swelling health-care costs, workers need more than time at home to bond with a newborn, cope with a medical crisis, or recover from pregnancy; they need a steady income.

Paid family leave would help tackle some of the most complex aspects of economic precarity that affect most working families today, from unstable short-term jobs without benefits to low wages and eroding public health-care programs. Currently, just 15 percent of formally employed workers have paid leave through an employer-based program, though most workers qualify for limited unpaid family leave. But when workers take long-term leave without any income support, the financial gap doesn’t just deepen the burdens of pregnancy and newborn care; it also destabilizes long-term economic security, adding to housing debt and medical costs, as well as future family savings.

The FMLA’s federal protections have been used countless times since their enactment, but remain limited to larger, formal workplaces, excluding roughly 40 percent of the workforce. That means millions of private-sector workers have virtually no legal guarantee of paid or unpaid leave, with the law exempting smaller workplaces as well as self-employed, subcontracted, temporary, and “gig” workers. The system ignores the burdens impacting an Uber driver with a newborn at home, or the expecting photographer who can’t lug her equipment around while two weeks overdue.

Paradoxically, those most in need of paid leave are the least likely to get it: While the CEO mother is in the economic bracket most likely to have generous leave benefits (even in that privileged tier, formal paid leave covers only about a quarter of managers), the pregnant worker in the company’s cafeteria can’t afford to take time off unless she’s willing to forgo wages or risk her job. While coverage is relatively widespread at large companies, 90 percent of firms with fewer than 100 staff members have no wage-protected family leave. Tens of millions across the country can’t even take a single paid sick day.

Another issue that paid family leave could address is pregnancy discrimination for pregnant workers who want to stay on the job. According to federal data, pregnancy-related barriers disproportionately burden women workers who are poor, of color, or immigrants. Despite federal antidiscrimination protection in the workplace, pregnancy is all too often a pretext for bosses to pressure or bully women off the job. Often, workers who are capable of continuing their duties are denied their legal right to minor accommodations like light lifting duty that would allow them to keep working. They are then forced to take unpaid leave, quit, or endure needless physical strain, perhaps until they reach a dangerous breaking point.

Hilda Guzzman, a cashier at Dollar Tree whose story is documented in a National Women’s Law Center study, began to experience pregnancy pain while standing at her cash register all day, but her boss refused her request to sit on a stool through her 10-hour shift. The resulting “bleeding, premature labor pains, and frequent visits to the emergency room” eventually forced her not only to leave work and lose wages but also to suffer needless risks both to her own and her future baby’s health.

A national paid-leave program would help all parents who—even if nominally protected from being fired for family-care needs—are denied an opportunity to bond after childbirth, or are forced to rush back in a few days to make up for lost work time. A comprehensive, government-run family-leave system would establish fair, consistent income support for workers while helping them stay connected to the workforce. It would help stabilize the household bottom lines of workers as well as employers, support early-childhood development, narrow gendered pay gaps, smooth transitions back to career-track jobs, and in turn improve employee retention and productivity.

It should be the government’s job to provide a manageable infrastructure for a universal paid-leave subsidy through a combination of taxes and government-administered benefits. According to Ariane Hegewisch, director of the Institute for Women’s Policy Research’s (IWPR) Employment and Earnings Program, instituting a new benefits program at the company level would be “expensive for individual employers,” making it extremely difficult for workers, even in corporate jobs, to negotiate on their own. “It really needs a statutory approach, with social insurance, to ‘socialize’ the costs of providing such leave.”

Paralleling programs in California, Rhode Island, Connecticut, and New York—which have supported hundreds of thousands of families—the proposed federal Family and Medical Insurance Leave (FAMILY) Act would provide a nationwide family-leave program managed through a dedicated payroll tax. For about $1.50 off each weekly paycheck, new parents would be reimbursed by up to two-thirds of their regular income. And unlike the FMLA, the program would cover all families, including LGBTQ and adoptive parents in any sector, as well as contracted and self-employed workers.

IWPR estimates that a nationwide family-leave plan would help nearly 8 million parents annually, restoring crucial wages for households with newborns or members afflicted by health problems, and covering individual medical needs. It would likely involve a typical leave period of around seven weeks, with average weekly benefits of about $500. Yet that’s only a thin slice of a lifetime gain: A simple weekly benefit would empower workers to take a hard-earned break to invest in the lives of their families—and that time is priceless.