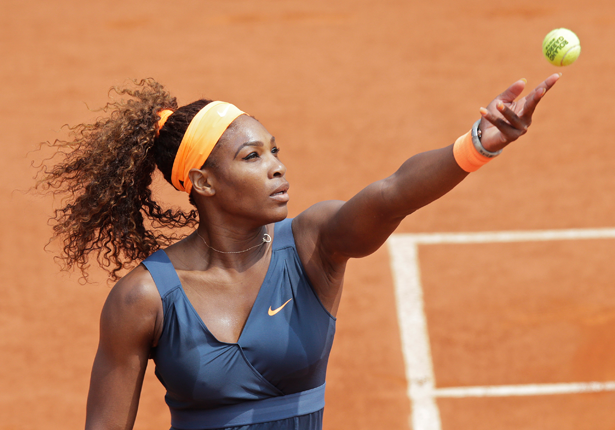 “Serena and her big sister Venus brought to mind Zora Neale Hurston’s ‘I feel most colored when I am thrown against a white background.’… Serena and Venus win sometimes, they lose sometimes, they’ve been booed and cheered, and through it all and evident to all were those people who are enraged they are there at all—graphite against a sharp white background.”—Claudia Rankine, Citizen: An American Lyric

Tennis icon Serena Williams and her older sister Venus have spent their careers not only surviving but thriving in a hostile space: a white background that often threatened to swallow them whole. As Serena’s individual legend flourished, so did her antagonists in the aristocratic, imperious world of professional tennis. Biased judges, grotesque mockeries and other indignities (“crip walk”?) pock her career. While accumulating scars and enduring the burden imposed by the “white background,” the girl known for years as “Venus’s little sister” has also— remarkably—made herself into perhaps the greatest player to ever pick up a racket. The numbers speak for themselves: nineteen Grand Slam wins, fifty-six singles titles, along with twenty-two doubles championships, and all done with wicked flair in dazzling technicolor.

Now Serena Williams, for all she has accomplished, is attempting to enter a club even more restricted than those that host certain events on the WTA tour. It is reserved for the few defined by history as being “more than just an athlete.” Ms. Williams has announced both in a video message and the pages of Time magazine that she will be returning to play at the Indian Wells Tournament after a fourteen-year absence. Serena and Venus have famously boycotted Indian Wells since 2001 when “racist slurs” and “false allegations” of match fixing were levied against the Williams family. As she recounted in Time, their father, Richard, had “dedicated his whole life to prepping us for this incredible journey, and there he had to sit and watch his daughter being taunted, sparking cold memories of his experiences growing up in the South.”

Serena Williams’ has decided, after years of apologies and invitations from the new directors at Indian Wells, to “forgive freely,” “follow [her] heart” and return to place she describes as “nightmare,” a place where at the age of 19 she spent “hours crying in the Indian Wells locker room after winning in 2001…feeling as if I had lost the biggest game ever—not a mere tennis game but a bigger fight for equality.”

In an effort to grasp the momentousness of all of this, I asked Georgetown professor and author Michael Eric Dyson for his thoughts. He said:

“Serena’s decision to return to Indian Wells suggests the majestic arc of forgiveness in black life that has helped to redeem America. Without such forgiveness, America may have well flowed in the blood of recrimination and revenge. Instead black folk have consistently proved to be moral pillars of American conscience, from Martin Luther King Jr. to Sybrina Fulton, black athletes in particular have carried the water of grievance for black life, sometimes against their wills, and have represented the heartbeat of black resistance to racism. Serena’s—and her family’s—painful experiences at Indian Wells was a low moment in American sports history. She was right to remain visibly absent. She let her lack of presence do the speaking—a protest of strategic absence. Her decision to return is equally effective. She has decided that Indian Wells will no longer be an individual sore spot, and therefore no longer a collective one for her or her fans or the black Americans who love and support her. As the most dominant athlete of her generation, Serena carries huge symbolic capital. This gesture of principled forgiveness once again proves that black athletes at their best have been thermostats who changed the temperature of society rather than thermometers that merely recorded the temperature.”

What is particularly stunning about this return to Indian Wells is that Williams is not only writing a narrative of her own racial reconciliation but also linking it to a broader anti-racist struggle that touches millions of lives. She has announced that fans could enter a raffle for ten dollars, the winner getting to “stand with me at Indian Wells.” All raffle proceeds are going to the Equal Justice Initiative, which fights racism and class bias in the jails and courts by providing legal representation to those lost in the catacombs of the Prison Industrial Complex. This is an organization dedicated to ending our system of deeply racialized mass incarceration, and Serena Williams is leveraging the “white background,” that corporatized, country club world of pro tennis, to assist them in their fight.

I contacted Andrew Jones, a reporter at The Intercept and a freelance sportswriter who perhaps knows more about tennis than anyone under 30 in the United States. He e-mailed me about the joyous “shock” he felt upon learning that Serena was using this moment to promote the work of EJI. “No one expected her to do that,” he wrote. “No one. It was quite the rare sight seeing a notable figure, celebrity or celebrity athlete, highlight a criminal justice organization. That was so unexpected and it added even more awesomeness to her returning to Indian Wells. Her going back to the tournament was one thing. But her support for a criminal justice law firm located in the Deep Southern town of Montgomery, with its racist past and systematic racist present, was staggeringly tremendous.”

He is absolutely right. Sportswriter Jessica Luther put it this way: “Serena is literally using her return to the most racist incident in her career to raise money for an organization that actively works to dismantle the systemic racism that plagues the criminal justice system. Serena is inspiring. She’s inspiring on the court, no doubt. But she and her sister have inspired me for many, many years now. This is a good example of why.”

Jon Wertheim, editor and senior writer for Sports Illustrated said to me that he believes, “as trite as it sounds, it’s a proud day for tennis. All credit to Serena for having the strength to take a principled stand for all these years; and then the intellectual and emotional flexibility to soften and reverse that stance. I credit the tournament, too, for reaching out repeatedly and making it clear that—while respectful of Serena’s decision throughout the years—she would be welcomed back. I can’t imagine she receiving anything other than a warm reception next month.”

Wertheim is certainly correct that the people at Indian Wells, not to mention the Women’s Tennis Association, will breathe a sigh of relief over her return. At this point in her career, the WTA needs Serena Williams more than Serena Williams needs the WTA. As she wrote, “I’m still as driven as ever, but the ride is a little easier. I play for the love of the game. And it is with that love in mind, and a new understanding of the true meaning of forgiveness, that I will proudly return to Indian Wells in 2015.”

The background to Serena Williams is still sharply white. But she is showcasing a power to sculpt that background into an alabaster marble platform. She is changing tennis, choosing to rewrite its future instead of being victimized by its past. Nineteen career Grand Slam wins, fifty-six singles championships, twenty-two doubles championships. And utterly fearless.