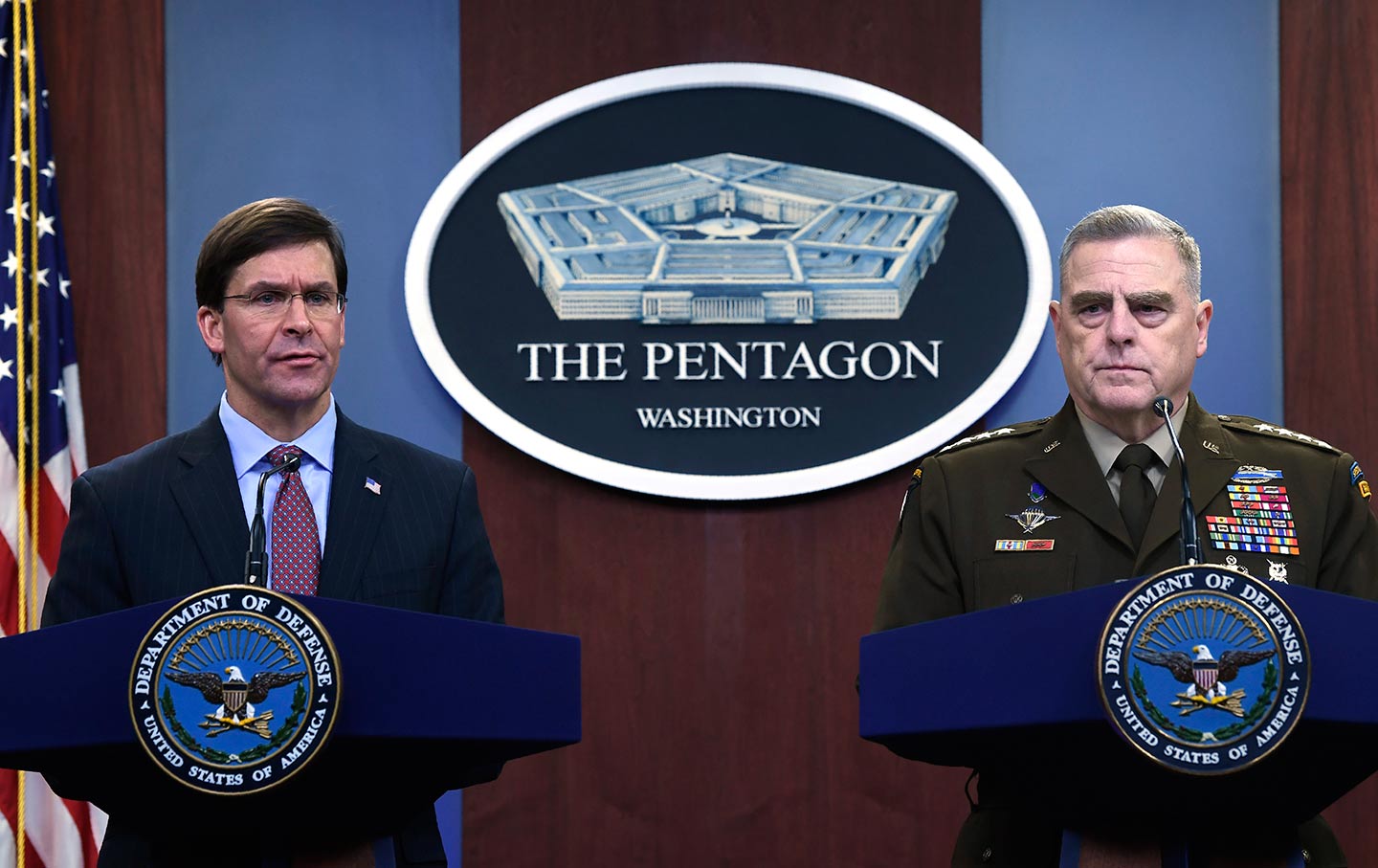 Defense Secretary Mark Esper, left, and the chairman of the Joint Chiefs of Staff, Gen. Mark Milley, right, listen to a reporter’s question during a news conference at the Pentagon, December 20, 2019. (Susan Walsh / AP Photo)

Last month, President Donald Trump signed a congressional authorization to spend over $738 billion on the Pentagon. This is more than was spent on the military during the Korean War, the Vietnam War, or the height of the Reagan buildup.

Only 41 Democrats in the House of Representatives voted against this spending bill—fewer than one in five.

Why? It’s simple. Democrats are afraid of appearing weak on defense. So afraid that they would rather sacrifice their priorities on the altar of US militarism than risk angering an insatiable god.

They should take courage. The public has had it with lies about the Afghan War, the chaos in Iraq, and now the prospect of an even more catastrophic war with Iran. The American people want a strong military, yes—but they also want an end to the wasteful defense spending.

More than anything they want jobs. Real jobs—ones that aren’t reliant on a pork-barrel Pentagon and which produce things the United States actually needs. And they know where Congress can find the money for them.

In 2018, we commissioned a poll to explore voter attitudes about national security. We put progressive frames next to hard-core, robust conservative frames and confirmed that progressive positions could out-frame conservative talking points by two to one, three to one, even four to one.

We took our poll to Washington, DC, and met with senior cogressional leaders, including Senators Bernie Sanders, Elizabeth Warren, and Jeff Merkley and House Speaker Nancy Pelosi to present our findings. They gave us very positive reactions, but Representative Barbara Lee quickly brought us back to earth.

“Whenever we have a vote on defense appropriations,’ she said, “Members come up to me and say, ‘We know we spend too much money on defense, and I would love to vote with you, Barbara, but if the defense budget is reduced, I will lose 300 jobs in my district.’”

The defense industry has strategically located defense contracts in every congressional district in America and armies of lobbyists in Washington. It has made that concern for jobs the biggest impediment to rational defense spending.

So, we did a new poll. We tested voter reactions to the idea of job conversion—specifically, conversion from making armaments to making things that actually improve people’s lives in America.

Job conversion is not a new idea—indeed, America did massive job conversions after World War II—but it is an idea that has been dormant for 25 years and is not part of the current political vernacular. How resistant would people be to changing jobs, getting retrained, possibly having to disrupt their lives? We didn’t know, but the results exceeded our expectations and we are able to say with great confidence that voters are ready to rethink excessive defense spending, even when it could mean fundamental job changes for them.

As we did previously, we gave voters a choice of the best frames we could find for both positions. We tried not to tilt the scales in any way. For example, we asked voters which statement they agreed with:

The most important results came from our question on pork-barrel politics and the defense budget. We were amazed at what we found. By large margins, American voters do not approve of wasteful spending on defense, and support cuts to the Pentagon budget, even if that means temporary damage to their local economy.

For example, we asked American voters to select one of the following:

By a whopping 77 to 13 percent margin, American voters rejected the notion that politicians should send unnecessary defense dollars back to their districts. A similar margin believed Pentagon spending should be determined only by what is needed to keep us safe, not by what it takes to preserve defense jobs.

Indeed, when we asked what they thought of the local effects of cuts to Pentagon spending, over 70 percent of voters answered that their community would struggle temporarily and then recover or that it would have no local impact.

We then changed tack. Studies have repeatedly found that defense spending creates far fewer jobs than spending the same amount on domestic programs. By two to one, voters agreed that we “should cut Pentagon spending so we can invest more in things like healthcare, education, infrastructure, and clean energy that create more jobs for the same amount of money.

The results were consistent, question after question. For example, 68 percent—including over half of the Trump supporters—believed the Pentagon should not receive spending increases if it fails a financial audit. Only 15 percent disagreed.

As we did last year, we probed voters’ beliefs on nuclear weapons. By a wide margin, voters believe nuclear weapons are more dangerous than the threats they are designed to counter. They believe that the current level of nuclear spending is wasteful, they support policies to break the back of the new arms race, and they want to rely less on threats of mass genocide for our security.

The full polling results allow us to draw a number of interrelated conclusions about the mood of the electorate in this presidential election year.

First, American voters are tired of endless wars. At a time when median real incomes have stagnated for more than a generation, people want more investment at home. This is not a call for isolationism; voters still want to be globally engaged. They just want policy-makers to prioritize funding the social, medical, and environmental changes needed in this country. Our results suggest that policy-makers would be rewarded—not punished—for pursuing diplomatic solutions to conflicts.

Second, American voters are uncomfortable with the role of nuclear weapons in our defense policy. With the messaging we suggest, the public strongly supports fewer weapons, more negotiated restraints, and policies that will avoid nuclear war.

Third, the American people believe the Pentagon budget is out of control. As former vice president Biden is fond of saying, “Show me your budget and I’ll tell you what you value.” By that yardstick, our values need some adjustment. There is a real hunger for plans, like those of Senators Elizabeth Warren and Bernie Sanders, to lower defense spending and reduce corporate influence at the Pentagon.

Indeed, our polling suggests that the majority of voters will still call for cuts in Pentagon spending even if it affects their local communities, both because they believe their communities will recover and the money could be spent in more productive ways in the long run.

These beliefs are held by Democrats and independents and a big swath of Trump voters. Candidates who speak to these core beliefs are likely to be rewarded not just by a more balanced federal budget but also by success on Election Day.

Trump in the Debate: None Dare Call It Treason

Sufjan Stevens’s Lullabies for the Apocalypse