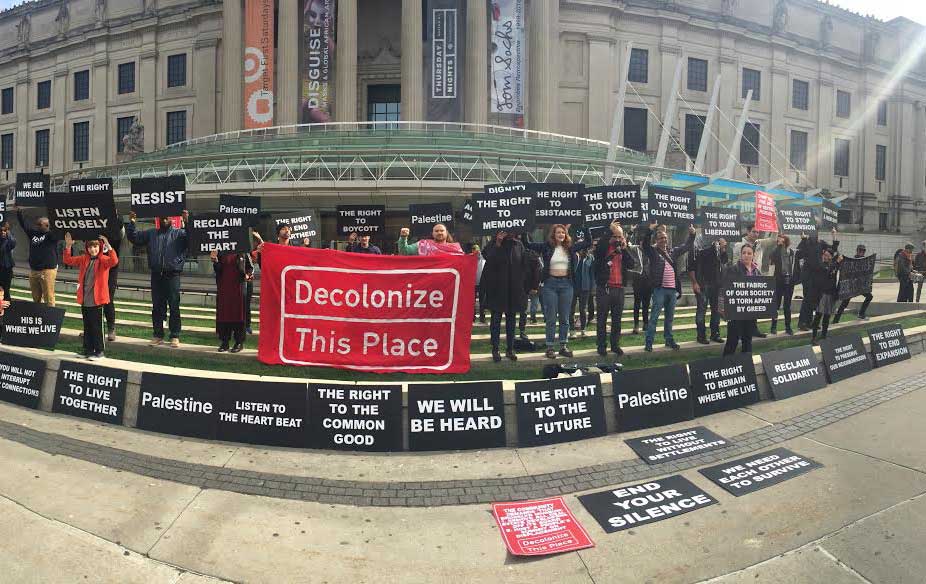 Protesters gather outside of the Brooklyn Museum to call attention to the role the museum plays in gentrification as well as the colonial overtones of their exhibit This Place. (Courtesy of #DecolonizeThisPlace organizers)

At the hot new “protest art” exhibit at the Brooklyn Museum on Saturday, a cluster of museumgoers shattered the silence, breaking into a call and response. An installation on the wall soon morphed into a performance piece, as activist Alicia Boyd  launched into a mic check, and distilled her community’s outrage into a fierce proclamation.

“Every black community is under attack!” cried  Boyd, as the exhibition space echoed with a litany of grievances about homelessness, displacement, and greed.

“As our public assets are being sold to developers, as our elected officials are riddled with corruption, as the real-estate industry destroys families and communities for money…”

Boyd called out the museum and its director, Anne Pasternak: “We stand united.… Whose side are you on!”

As security staff swooped in, Boyd pointed to the installation behind her: a presentation on gentrification and displacement, arranged around a screen.

“This is my exhibit, this is my exhibit!” Boyd countered. The staff backed off when they realized that the artist was indeed imitating her art. Her face then appeared on the screen in a video decrying gentrification, framed amid a montage of scenes of organizing campaigns.

On the same floor, another protest erupted at This Place, a photography exhibit depicting the Israeli occupation in a supposedly “balanced” light. A group of protesters chanted, “Decolonize this place!”—denouncing the occupation of Palestine and linking it to the museum space itself, as another product of historic land colonization. To rectify the framing of certain pictures, they placed their own labels by the official Israeli titles, to reveal the Palestinian names.

“While the museum claims not to take sides,” the activists declared, “We see apartheid as a black-and-white issue.”

Eventually security escorted the protesters outside. Some climbed onto the balcony on the museum’s facade to drop banners displaying the slogans “Black Lives Matter” and “Decolonize This Place,” which were quickly whisked away.

The museum saw these parallel exhibits as representing two exciting artistic vanguards. To the protesters, they were two glorifications of one contiguous colonization project stretching from the West Bank to Williamsburg. With the juxtaposition of a dubiously financed exhibit celebrating a colonial project and another seeking to expropriate the vernacular of popular protest, local artists see the gulf widening between private agendas and a public cultural institution.

In a mission statement, the coordinators of the weekend’s actions, known as Decolonial Cultural Front (DCF), presented a two-front challenge, contending that both gentrification and occupation shared a common ground in Brooklyn, and the museum was a contested space for a symbolic reclamation.

Musing on the ejection of protesters from the protest-art exhibit, DCF activist and cultural scholar Nick Mirzoeff drew parallels between two forms of dispossession: “This museum is in fact supporting 1 percent realtors in Brooklyn, and the 1 percent who support settlements and the [Israeli Defense Force] in Palestine. So it’s displacement here and displacement there.”

To pro-Palestinian activists, This Place’s detached portraits of Israeli society effectively erased the brutality facing colonized communities. DCF traced the private international funders behind the exhibit, documenting alleged ties to Israeli military and business interests. Despite the veneer of “balance,” activists read the works as a manipulative, propagandistic representation that “effaces Palestinians and lends the cultural capital of these artists—and the Brooklyn Museum itself—to a sanitized vision of the region.”

At the protest-art exhibit Agitprop, meanwhile, Movement to Protect the People, the community group Boyd helps lead, raised a similar critique of colonization and displacement via soft power. Bristling at flattened portrayals of movement graphics and logos, they urged the museum not to allow real-estate developers on its board, and to instead convene a “People’s Summit” to foster public dialogue about gentrification and inequality in local communities.

“We’re saying, you can’t use the museum as a project of colonization at the same time as you want to house protest art,” Mirzoeff said.

After a protest last November against the museum’s ties to the real-estate industry, Pasternak did respond partially to the activist’s demands, telling The Wall Street Journal that while she disapproved of the direct actions, she still “very much appreciate[d] the fact that artists were organizing with affordable-housing advocates around the very real ramifications of what’s happening to our neighborhoods.” Boyd’s installation project, added later as part of a contemporary extension to the exhibit’s historical ephemera, was read as a kind of concessionary gesture to protesters. However, activists continue to demand the long-promised summit that the museum has evidently stalled on, arguing it has a duty to “provide this space for our voices to be heard.”

DCF has also reached out to activist and scholar Angela Davis, whom the museum plans to honor later this year, seeking to engage her on their decolonization campaigns in light of her activist work on issues of racial justice and Palestinian rights.

Following Saturday’s protests, the Brooklyn Museum issued a statement to The Nation, restating in part its commitment to “open conversation, free exchange of ideas, listening, and viewing issues from varying perspective.” And while the museum stated that it “always welcomed these conversations no matter how difficult, even polarizing, they may be,” it emphasized it “does not take sides in any debate.”

Yet as they gathered outside, to the tune of a radical marching band, the “right” side for the agitators was clear as ever. Palestinian-American DCF activist Amin Husain told The Nation, “This is our museum. We paid for it. It’s an important part of our community. But the question that it raises is, ‘Who do they represent as the community? Who do they imagine their community to be?’ And so this action is about holding it accountable.” In the museum’s public space, the group aimed to resist a powerful institution’s abuse of a cultural commons, locally and globally. “They have broken promises to this community,” Husain said.

Before the museum’s neoclassical facade, activists held black-and-white placards declaring “The Right to Live Free of Oppression,” “The Right to Memory,” and “Greed Kills”—slogans that simultaneously addressed the museum’s elite executives and resonated with embattled neighborhoods below. The activists might have been removed from the exhibits, but they remained, as always, where they were most at home—on the outside.