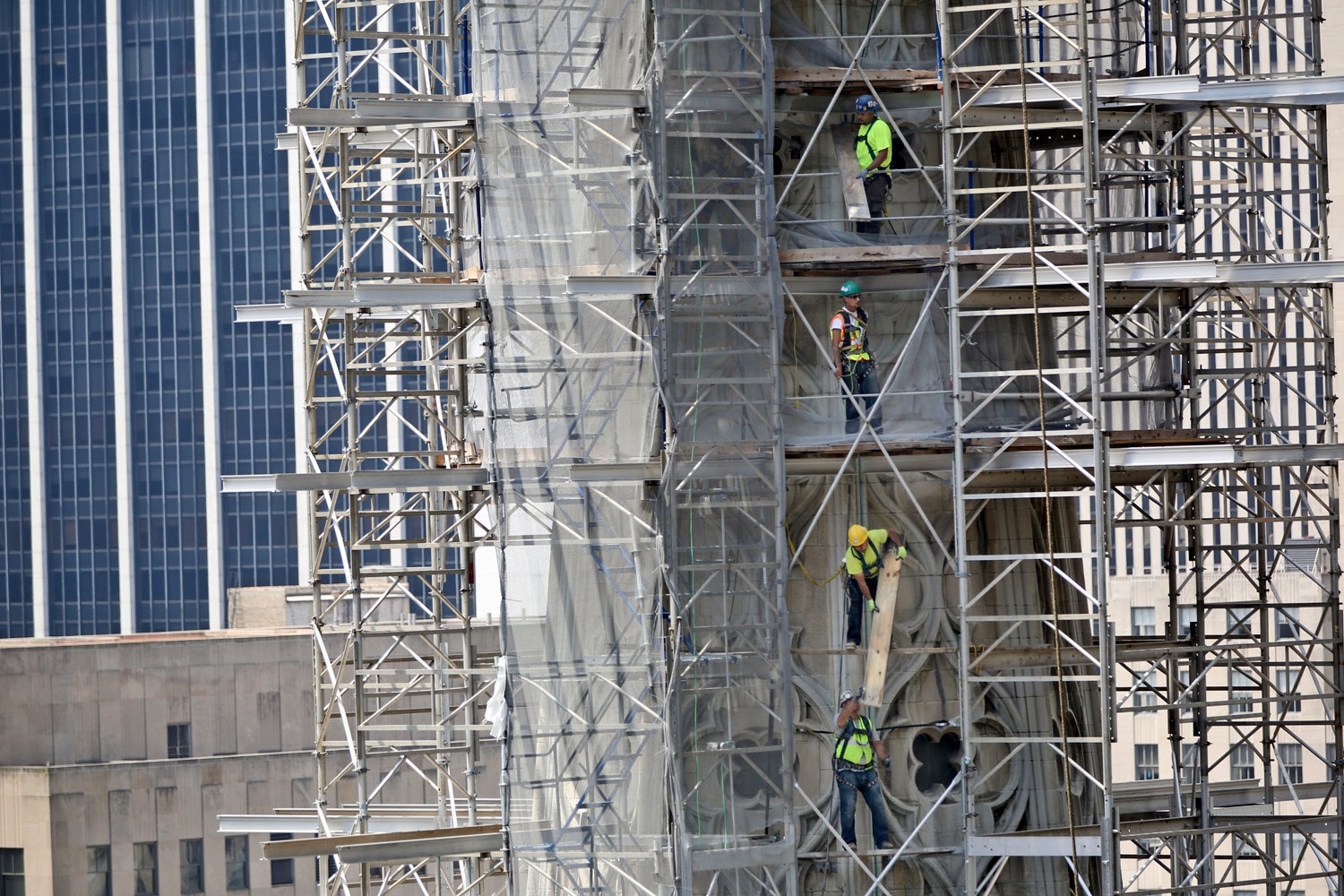 Most of New York’s workers were probably too busy on April 28 to notice that it was Workers’ Memorial Day. But amid the hustle and bustle of the workday, a group of activists gathered at a West Side building site known for its poor safety conditions to issue a stark warning.

Antonio Sanchez of the Worker’s Justice Project proclaimed, “Every day immigrant construction workers like myself put our lives at risk. Many have gotten injured because irresponsible contractors provide us defective…machinery, weak scaffolding, broken ladders or simply no safety protection.”

The next day, at another Manhattan construction site, a carpenter came unhooked from his safety gear, tumbled fifteen feet, and ended up hospitalized. The Department of Buildings issued a perfunctory citation for “failure to safeguard all persons and property.” It was the worker’s second day on the job—and an eerie realization of the activists’ forewarnings just a day before.

Though the construction industry employs less than 4 percent of New York’s workers, it claims nearly one-fifth of work-related deaths—making it the “deadliest industry” (followed by transportation), according to a report on work-related fatalities in New York by the New York Committee for Occupational Safety and Health (NYCOSH). That construction is a dangerous business should come as no surprise to anyone who has walked past a churning urban construction zone, fraught with hollowed-out sidewalks and narrow scaffolds. What might surprise you is that it doesn’t have to be that way; the dangers besieging workers reflect the cold business calculations of their bosses.

Analyzing cases of construction-work deaths since 2010—many of them linked to violations of federal safety standards—NYCOSH concludes: “many deaths in construction could have and should have been prevented had the employer followed health and safety requirements and prioritized workers’ safety over the bottom line.”

From toxic chemicals to falling debris, every bodily threat is compounded by lax institutional attitudes toward safety, as employers can often neglect the responsibility to protect workers with impunity.

The precarity of workers reflects the atomization of the labor force. As union membership has eroded in recent years, according to the report, “in 2012, 72 percent of construction fatalities were at nonunion construction sites.”

Unionization used to be a vital foundation for construction safety, since workers can collectively bargain agreements on work rules and safety protections. But today, the industry is increasingly fueled by “self-employed” independent workers, or temporary jobbers, as opposed to regular employees, and they generally lack essential labor protections and are unsupported by unions.

Typically, a firm that uses a so-called “independent contractor” can escape direct liability if the worker gets hurt or killed, and can avoid paying for overtime, insurance and other benefits. In many blue-collar sectors, the systematic misclassification of workers as independent contractors has both destabilized workers economically, and made their workplaces less safe.

Safety threats follow New York’s demographic divides. About half of all fatalities in New York’s construction workforce befell immigrants—about double the immigrant fatality rate in the industry nationwide. Of the thirty-eight construction-related deaths in 2012, fifteen of the victims were Latino. Despite ongoing efforts by OSHA regulators to expand outreach to immigrant workers, language barriers and social marginalization still make many low-wage immigrant workers especially vulnerable to exploitation.

Even when employers are punished for safety problems, they are rarely ever truly brought to justice. In one incident detailed in the report, 45 year-old Ricardo Gonzalez fell to his death at a building site in Queens, and the employer was cited for numerous violations, including failing to provide guardrails and fall protections. Ultimately, however, the penalties added up to just $11,600—later “reduced to $10,440 in an informal settlement.”

“People aren’t retiring when they used to retire,” explains NYCOSH Executive Director Charlene Obernauer. Due to financial pressures, “now you have people in their 50s and 60s doing heavy manual labor on a construction site, which we didn’t use to see twenty or thirty years ago, when more people were unionized [in] construction work.”

To protect this increasingly diverse, and increasingly precarious workforce, safety advocates say the government has plenty of tools at its disposal; it just needs the political will to apply them.

Albany politicians can start by resisting the industry’s attacks on existing regulations. Safety advocates have urged lawmakers to resist a lobbying campaign to dismantle the Scaffold Law, a 129-year-old regulation that imposes penalties on construction employers whose safety violations result in falling accidents.

In addition to preserving the scaffold safeguard, NYCOSH is pushing additional legislation for elevator worker safety, to strengthen licensing requirements and oversight of elevator technology.

And the rules will have little impact if OSHA’s penalties remain ridiculously low. NYCOSH notes that “even when a willful violation is cited in a fatality investigation, the maximum penalty is only $70,000 and it could be as low as $5,000.” In light of the mammoth profits flooding New York’s real-estate industry, a fine of a few thousand dollars is a rounding error, hardly enough to force any institutional change in labor practices.

Labor advocates point to the proposed Protecting America’s Workers Act, which would expand federal penalties and push companies to take immediate action on allegations of “serious, willful and repeat violations during the period citations are being contested, rather than waiting until the end of an often lengthy proceeding.” In the face of creaky bureaucracies and lawyered-up building firms, such a policy could help speed the execution of justice when workplace safety is a matter of life and death.

In the long run, an expansion of the entire OSHA inspection force would allow regulators to act in a preventive role, rather than responding to tragedies after the fact, and beef up its outreach programs to temporary and irregular laborers and immigrant workers, who routinely face both marginalization from regulatory institutions and the harshest and most insecure labor conditions.

NYCOSH also recommends more resources for a long-underfunded state agency known as the Public Employee Safety and Health Bureau, which enforces health and safety standards in public-sector workplaces and can serve as a watchdog for government-supported construction projects.

Beyond the regulatory regime and the support of organized labor, Obernauer says the buck stops with the boss. “Ultimately, it’s the employer’s responsibility…. They have to create a safe working environment,” she says. “You can have workers be as militant as they can be, but at end of the day, workers aren’t going to go in their own pockets to buy their own safety equipment.”

And the business calculations that shape the risks of construction work tie back to the development priorities of state and local officials. The city can require that developers who obtain public contracts maintain rigorous safety standards and fair working conditions. As the government is supporting new infrastructure and building projects, it can leverage public money to protect workers, and in turn, allow the public to reclaim its neighborhoods from the talons of big developers.

For the worker who crashed to the ground just a day after activists rallied to protect him, a shift in the balance of power on the work site could not come soon enough.