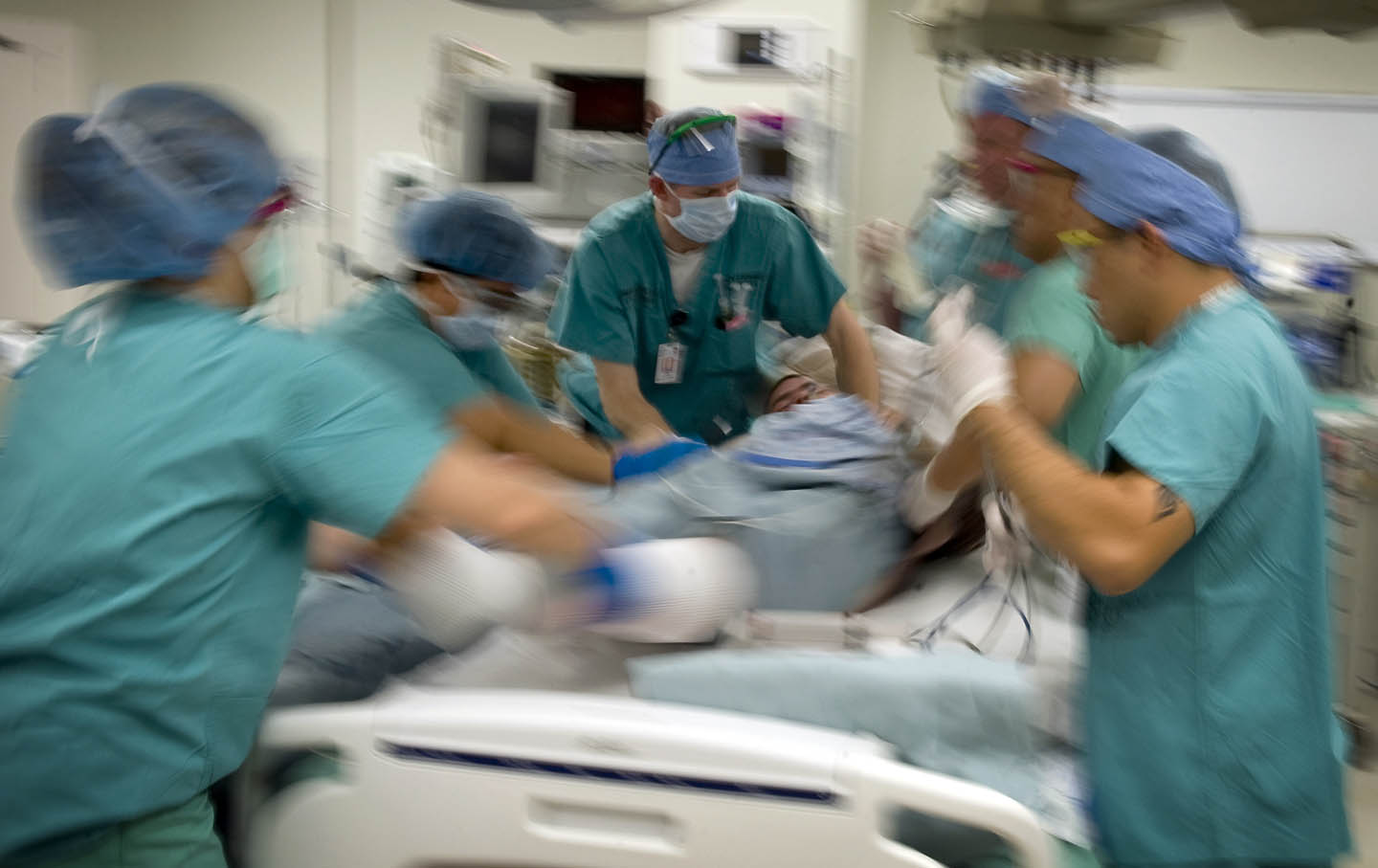 The classic line of the friendly white-capped nurse of hospital lore is “This won’t hurt a bit.” For the real life nurses caring for patients every day, however, their job is often a world of pain.

Nurses carry the weight of others’ pain 24-7—often literally, lifting and shifting immobile patients with minimal assistance. The burden takes a hidden toll, as nurses, orderlies, nursing assistants, and other frontline health workers experience some of the highest rates of muscoskeletal disorders of any sector. Registered nurses face more than 50 percent the rate of musculoskeletal injury of the general workforce; nursing assistants more than six times the rate.

The government is recognizing that injured health-care workers cost the system on both ends, requiring expensive treatment for avoidable injury and undermining the care infrastructure by debilitating staff or pushing people out of the job. The federal Occupational Safety and Health Administration is now taking steps toward protecting them against both injury and exploitation.

Yet the biggest safety challenge may be simply marshalling the political will to implement proven methods of protecting workers with mechanical assistance, appropriate staffing, and institutional accountability. Following state-level efforts in California, Texas, New York, and other states, OSHA has recently rolled out guidelines and safety memoranda for safe patient handling and other injury-prevention methods. Regulators are urging hospitals, nursing homes, and other facilities to invest in equipment like mechanical lifts and to establish protocols for moving patients.

For workers, a lack of empowerment in the workplace could pose a greater threat than any physical hazard.

For example, setting up “lift teams” at a hospital unit could provide specialized handling services alongside core nursing staff as they carry out principal care duties. At one facility presented as a case study, Tampa General Hospital in Florida, lift teams “contributed to a 65 percent decrease in patient handling injuries, a 90 percent reduction in lost workdays, and a 92 percent reduction in workers’ compensation costs per dollar of payroll. These benefits far outweigh the costs of equipment, team member salaries, and training.”

But some of those rules go unenforced, particularly when there just aren’t enough staff members on the hospital floor to, say, help a nurse lift someone twice her size onto the operating table, or to cover for a fellow nursing assistant while she takes a break to relieve a strained back. And preventable risks persist as long as a debilitating occupational injury could cost a worker both her health and her job.

For Missy Christians, whose case is detailed in a recent report on patient handling injuries by Public Citizen, her nursing career at an Iowa City Hospital was thrown into turmoil when a patient who was apparently suffering from dementia “attempted to use Christians’s shoulder to catapult himself out of bed.” She was later diagnosed with “three bulging disks, one of which was possibly herniated.” The process of treatment and obtaining compensation dragged on for years. While she burned through her medical leave allowance, she twice tried to resume work, but the chronic pain was too intense—and the administrators were reluctant to accommodate her with light duty. She was dismissed in 2010 and then again in 2014, while recovering from surgery. The administration stated, “Since you have not returned to work, we are considering you to have resigned from your position.”

According to Public Citizen’s report, the hospital cited performance-related reasons to justify the dismissal, but Christians believed her employer set her up to be fired. “They just cut you loose once you’re no use to them,” she said.

So nurses get hurt while caring for underserved patients, then lose their jobs, and ultimately become poor patients themselves. Under that compounded paradox of a profit-driven medical industry, “there’s a huge cost associated with getting someone the care they need and then rehabilitating them,” explains Public Citizen advocate Keith Wrightson, “so it’s a lot easier for employers just to fire or get rid of those workers when these injuries do happen.”

Labor advocates warn that when nurses are overstretched, they cannot adequately evaluate patients’ mobility. So mandatory nursing staff-to-patient ratios—such as the landmark safe-staffing legislation that California has recently implemented—are critical for workers and patients, particularly since harsh schedules are linked to higher turnover, cardiovascular disease, and depression. Bonnie Castillo of National Nurses United tells The Nation that under-investment in the workforce makes everyone more vulnerable.

A nurse trying to just make do…with having to assist a patient with no help—not only is the patient at risk but she is at risk as well. So staffing is everything. And when you hear the stories, one that’s very common is, “I was yelling for help because a patient was unrestrained and trying to get out of bed and was very confused, and no one came…. what’s important is having an educated, trained, 24-7 staff that can deal with all the needs of the patient.

For workers like Christians, a lack of empowerment in the workplace could pose a greater threat than any physical hazard. Safeguarding a frontline health-care workforce requires more than adequate numbers; unionization plays a key role in ensuring the facility’s accountability for compliance with safety rules, by protecting whistle-blowers from retaliation if they challenge the administration. “It’s very difficult in the non-union settings,” Castillo says, “because they don’t have representation they and they’re ‘at will’ employees.” (Only about a fifth of registered nurses are in unions.)

Under California’s nurse-ratio law, considered among the most comprehensive state policies, the compliance-monitoring structure is developed in collaboration with nurses, because unlike the managers, Castillo notes, “the nurse…does not have fiduciary responsibility to the hospital. Their primary responsibility is in the interests of the patient.” Staff can also refuse dangerous work, establishing the principle that patient care shouldn’t undercut workers’ well-being.

When a nurse can’t speak up about unsafe hospital conditions without risking her job, both labor and the public lose a powerful potential advocate: Only a culture of safety that respects her judgement can break the painful silence.