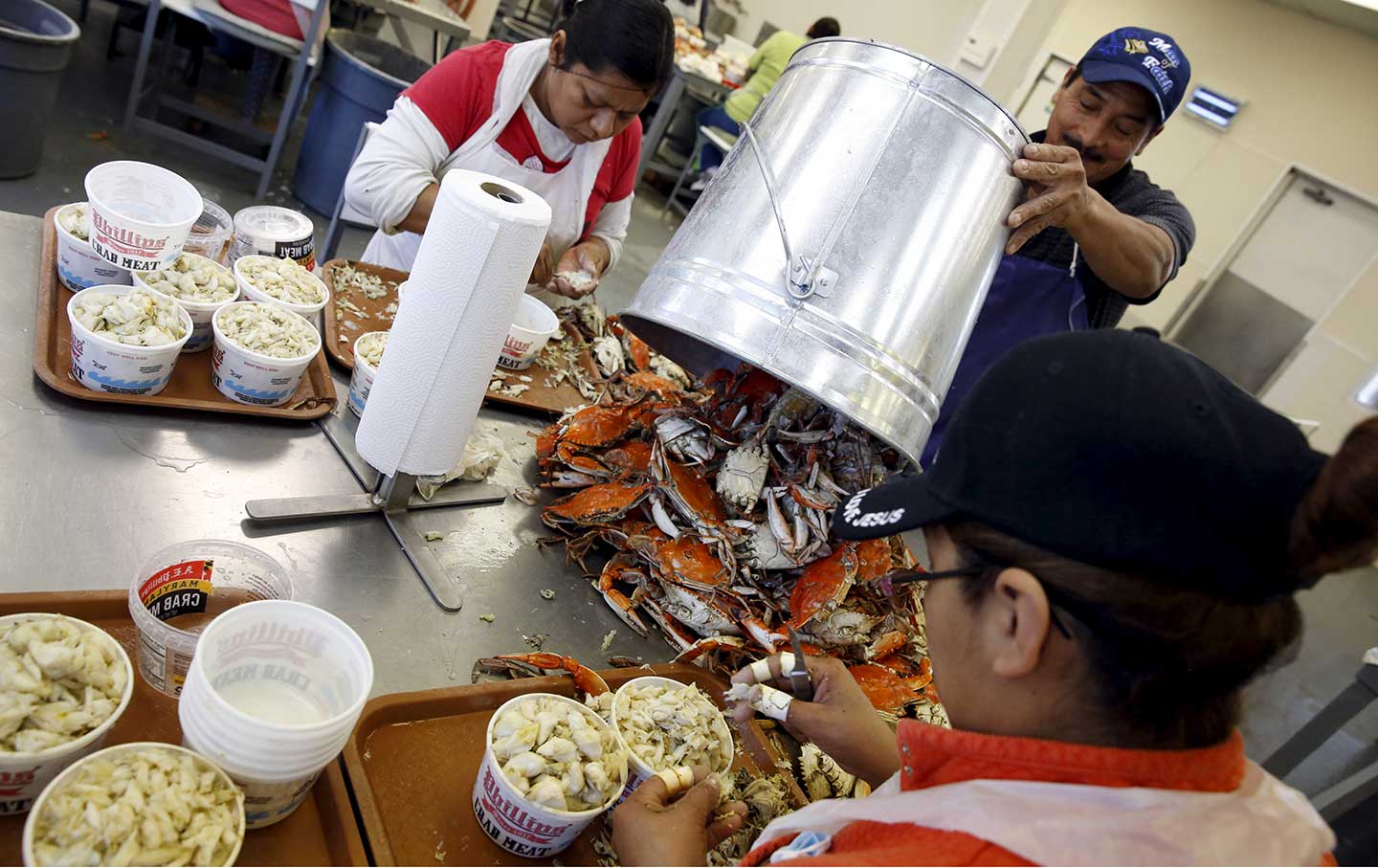 We know that women often hit a glass ceiling when trying to advance in the workforce, but migrant women seeking the American Dream get slammed into a glass wall. Thousands of women migrants cycle through the United States each year on temporary labor visas. But they are denied—legally—many protections mandated by regular federal labor laws. According to a new report by Centro de los Derechos del Migrante (CDM), visa-based labor programs enable companies to profit from a two-tier workforce stratified by gender and immigration status, leaving migrant women especially vulnerable to abuse or exploitation.

Migrant temp workers share the poverty and precarity of undocumented workers, with a key difference: They’re technically “legal,” thanks to their sponsoring employers. So if they have work papers, why don’t their papers come with rights too?

The study surveyed women workers from a wide range of contract-labor schemes that different industries use to fill temporary job slots. Visa categories cover farmworkers and housekeepers, engineers and summer resort staff. But whether immigrant women work as au pairs or fruit pickers, the study reveals that the visa programs are structured to deny them many of the fair-labor standards and protections afforded to citizens. The only thing these programs ensure, essentially, is that, as long as you’re on US soil, you’re a virtual captive of your boss.

For many of the women, restrictive labor contracts led to situations in which they faced sexual abuse, labor violations, or wage theft. Nearly half of the women surveyed reported being paid below the federal minimum wage. A majority received no overtime pay. Because of deep regulatory gaps, researchers say, migrant women are subjected to “systemic flaws [and] restrictions on access to justice” that enable companies and labor-recruitment agencies to “ensnare them in exploitation and trafficking schemes.” 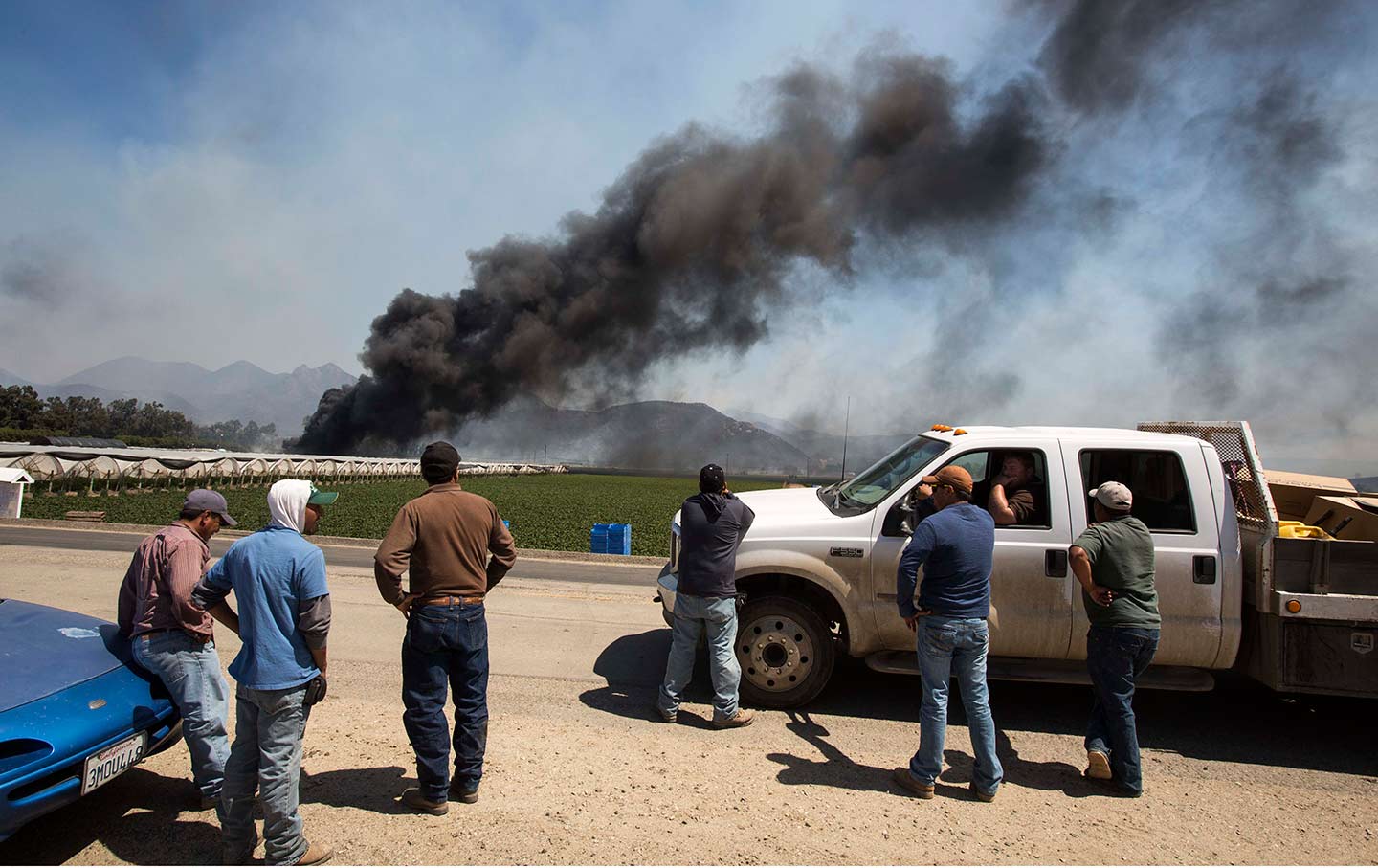 Visa rules often drive broader patterns of structural discrimination, because the categorization system effectively promotes institutionalized gender bias. In the H-visa category, for example, men are generally placed in H2A jobs, which are industrial jobs that tend to be more standardized and higher paying. But women are “tracked exclusively” into H2B jobs, which tend to be more precarious.

According to CDM Director of Operations Julia Coburn, the segregated hiring patterns used in both programs serve as a proxy for gender discrimination, and in many low-wage industries, “employers and recruiters are systematically excluding women from physically demanding jobs based on gendered and illegal tropes that represent women as incapable and incompetent to logistically handle” H-2A jobs.

In the Gulf Coast’s seasonal seafood industry, for example, women get placed in crabmeat-processing positions, doing piece work on assembly lines, while men typically work as cooks and haulers. Piece work leads to wage volatility, as women are under pressure to produce more to earn more by slicing and picking crabmeat at a frenzied pace. The seafood factory proves that “women’s work” can be just as rough as jobs traditionally done by men, Coburn says, as the crab pickers “risk chronic stress injuries from sustained, repetitive activity.”

Another hidden workplace hazard is sexual violence. Women who work custodial jobs, for example, are at constant risk of violence and harassment from customers and employers—when they get cornered in a room, or jeered at while scrubbing men’s toilets. A hotel worker might be threatened with retaliation or losing her work visa if she exposes her assailant. There is little hope of recourse if she’s working only a few months of the year, and a very real fear that she won’t be hired back next season if she complains. Many interviewees said they were deterred from reporting abuse by “fear, disillusionment with institutional authorities, or disorientation resulting from isolation and/or psychological manipulation.”

In the case of Rosa, what a labor recruiter had advertised to her as a professional animal-husbandry position turned out to be drudge work on a dairy farm. “Rosa spent her workdays cleaning water troughs, unloading animals, and performing other menial tasks for well below the $30,000 minimum annual salary her employer had promised.” As the lone woman at the site, she “was told to perform housekeeping duties, and even laundry, considered ‘women’s work.’ Her supervisors constantly told her that women are slower, weaker, and less skilled than men.”

The job-recruitment agent basically facilitates debt bondage under this system of trafficking-by-visa. According to Coburn, “We frequently see or hear US companies, or recruiters contracted by US employers, advertise jobs in Mexico that specify a preference for workers of a certain age and/or sex.” Employers mask this discrimination by using recruiting agencies and subcontractors to indirectly hire migrants, though, Coburn adds, these practices violate both US and Mexican labor laws.

As a noncitizen, Rosa had no real legal recourse. She later told researchers that her boss warned her, “You come here with this visa, and you have to do what you’re told.” Sadly, it was true. Under the visa system, exploitation of migrant labor and gender injustice mutually reinforce each other. Companies are empowered to simultaneously exploit women’s devalued labor, and to capitalize on the borders that produce the global economic stratification that leads to global labor migration.

The corruption of visa work programs might soon expand under Trump’s immigration-reform agenda: His administration seeks to expand “merit based” migration of “high skill” and professional workers, while cutting humanitarian and family-reunification programs.

The current debate over women’s equality in the workplace has revolved around ensuring equal labor standards and job opportunities, but overlooks the economic injustices facing the migrant women trapped in a shadow economy that federal labor standards can’t touch.

But migrant-labor programs don’t have to be a back door to substandard “women’s work.” CDM argues that the system can be improved simply by expanding oversight and improving enforcement of existing wage-and-hour laws, as well as instituting firm guidelines to ensure women get fair pay and equal access to decent jobs. One example is California’s new anti-trafficking law, which established a tracking system for labor contractors. On the federal level, abusive employers and recruiters should be restricted from participating in visa work programs. And abuse survivors need access to legal and social services in their home countries and in the United States.

Holding both employers and recruiters accountable across borders could help build equal opportunity for all women, and all low-wage workers in this country, wherever they come from. Labor rights should not stop at the border, and no worker should be forced to trade their dignity for a job.