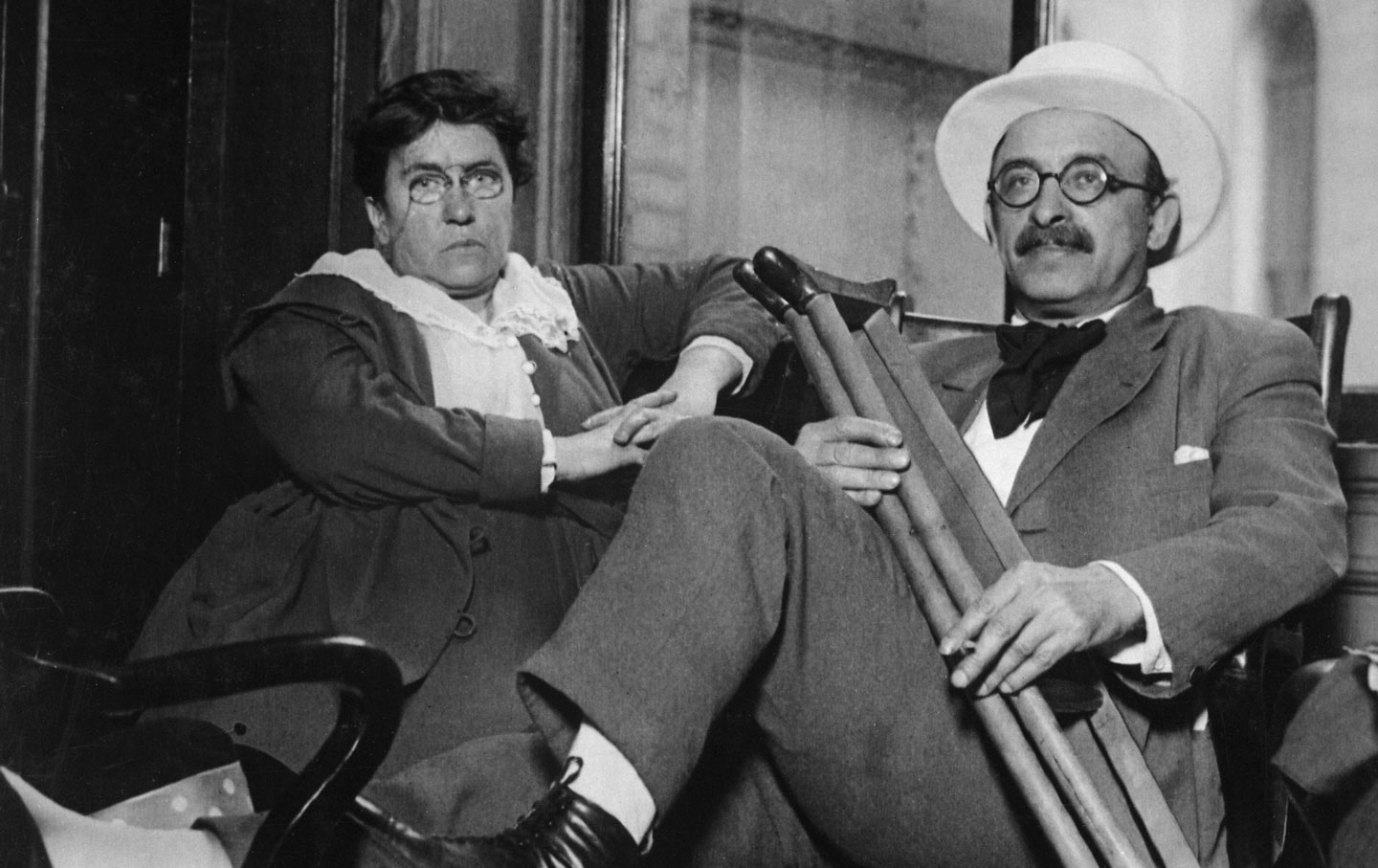 The Tragedy of the Political Exiles

During my ninety days in the United States old friends and new spoke much of my years in exile. It seemed incredible to them that I had been able to withstand the vicissitudes of banishment and come back unbroken in health and spirit and with my ideals unmarred. I confess I was deeply moved by their generous tribute. But also I was embarrassed, because the plight of hosts of political exiles scattered over Europe is so tragic that my struggle to survive was hardly worth mentioning.

The world carnage put an end to the golden era when a Bakunin and a Herzen, a Marx and a Kropotkin, and all the others could come and go without hindrance. In those days who cared about passports or visas? Who worried about one particular spot on earth? The whole world was one’s country. Not in their wildest dreams did it occur to these revolutionaries that the time might come when the world would be turned into a huge penitentiary, or that political conditions might become more despotic and inhuman than during the worst period of the Czars. The war for democracy and the advent of left and right dictatorships destroyed whatever freedom of movement political refugees had formerly enjoyed. Tens of thousands of men, women, and children have been forced to roam the earth, admitted nowhere. If they are fortunate enough to find asylum, it is nearly always for a short period only; they are always exposed to annoyance and chicanery, and their lives made a veritable hell.

All political movements are at each other’s throats—more bitter, vindictive, and downright savage against each other than they are against their common enemies. The most unpardonable offender in this respect is the so-called Union of Socialist Soviet Republics. Not only is it keeping up a process of extermination of all political opponents in and outside its territory, but it is also engaged in wholesale character assassination. Men and women with a heroic record of revolutionary activity, persons who have consecrated themselves to their ideals, who went through untold sufferings under the Romanovs, are maligned, misrepresented, dubbed with vile names, and hounded without mercy.

To be sure the Mussolinis and Hitlers are guilty of the same crime. But the barbarity of fascism and Nazism is being condemned and fought by the persons who have remained perfectly indifferent to the Golgotha of the Russian politicals. And not only indifferent; they actually justify the barbarities of the Russian dictatorship as inevitable. All these good people are under the spell of the Soviet myth. They lack awareness of the inconsistency and absurdity of their protesting against brutalities in capitalist countries when they are condoning the same brutalities in the Soviet Republic.

Few countries are left where one can still hold on to life. Indeed, nothing that the holocaust and its aftermath have brought to humanity can compare with the cruel plight of the political refugees. Yet undying are their faith and their hope in the masses. No shadow of doubt obscures their belief that the workers will wake up from their leaden sleep, that they will once more take up the battle for liberty and well-being.

In 1917, The Nation ran a profile of “Emma Goldman, prophetess of anarchy.” Deported to the Soviet Union in late 1919, Goldman (1869–1940) soon grew disillusioned with the Bolsheviks and fled, returning briefly to the United States in 1934.

When she first arrived in New York City on the overnight train from Rochester, Emma Goldman was 20 years old. It was August 15, 1889—a Sunday morning—and after an exhausting day spent wandering the streets of the unfamiliar city, she wound up at Sachs’s café on the Lower East Side, where all the anarchists in the city liked to gather. Within her first hour there, she met Alexander Berkman, who would became the most important person in her life. That same evening, Berkman invited Emma to hear a speech by Johann Most, the editor of the German-language anarchist paper Die Freiheit, and the man who would launch her apprenticeship as a public speaker.

The speed with which Emma Goldman found a home in the communal life of the young would-be revolutionaries milling around lower Manhattan in the 1890s—all immigrants, all speaking Russian or German or Yiddish—was actually unremarkable, given the time and place. Throughout the world, radicalism was exploding, and their counterparts in Europe were gathering in ever-growing numbers in much the same way. Emma and her friends could have been living in Paris or Petersburg, Zurich or Budapest, London or Berlin; citizenship had no meaning for them. Wherever they landed, they ate, drank and slept revolution. The jobs they held—driving trucks, sewing clothes, baking bread—were “day jobs” in every sense of the phrase. Revolution was who they were and what they did.

When America entered the First World War in 1917, it soon became illegal to speak against it; Emma and Berkman did nothing but. After three decades in the United States, the pair were brought to trial on charges of sedition, sent to prison for two years and then deported to the Soviet Union. Grief-stricken as she was at her expulsion from the United States, the only country she had ever loved, Emma was intensely excited at the thought of joining the Russian Revolution, which she considered an event destined to recover humankind’s lost nobility. Within the year, however, both she and Berkman were painfully disillusioned. Twenty-three months after their arrival, they left the Soviet Union. For Emma, exposing the revolution’s betrayal at the hands of the Bolsheviks would become a lifelong obsession—one that ultimately dismayed friends and foes alike.

In the United States, every agency that had a stake in their never setting foot in America again—the immigration service, the Justice Department, even the military—seemed to become unhinged upon learning that Emma and Berkman were no longer in the USSR. J. Edgar Hoover himself alerted every intelligence agency in Europe to the danger of giving these world-famous terrorists asylum, and he had their photographs sent to officials at every border and port of entry throughout the West.

Emma and Berkman came out of Russia into Riga, where they were immediately informed by the Latvian authorities that they were unwelcome there. Next came Stockholm and Berlin and more of the same. Emma and Berkman had been placed on an international blacklist that turned their lives into a bureaucratic nightmare. In each capital, the authorities were waiting to delay, expel or imprison them. Their days were often spent at consulate desks, where clerks half their age felt free to ignore or sneer at or ridicule them. “Come back tomorrow at 3,” one would say. “Wednesday at 10,” instructed another. “A week from today at 6,” ordered a third.

Now they were truly in exile, and would remain so for the rest of their lives, as triple outcasts: alienated from an exhausted postwar world in which political activism held no appeal; harassed by government authorities, who continued to see them as a threat to the state; and separated from both the European and American left, which shrank, appalled, from their outspoken denunciation of the Bolsheviks. And so they wandered, before coming to a permanently uncertain rest as illegals in the south of France, the only country that did not actively pursue them.

In 1934, Emma Goldman was granted a visa in order to make a ninety-day visit to the United States. It was her experiences during this time that inspired “The Tragedy of the Political Exiles,” her landmark piece for The Nation. In it, she describes how the world has changed since 1918. Before the war, she writes, radicals could easily come and go: “In those days, who cared about passports or visas? Who worried about one particular spot on earth? The whole world was one’s country…. Not in their wildest dream did it occur to these revolutionaries that the time might come when the world would be turned into a huge penitentiary.” Or, conversely, that they would become escaped prisoners on the run: “Tens of thousands of men, women, and children have been turned into modern Ahasueruses [Wandering Jews], forced to roam the earth, admitted nowhere…their lives made a veritable hell.”

The essay goes on to deliver an eloquent portrait of this underground life: its fears and torments, its humiliations and tensions, above all its haunting sense of ghostly invisibility. Ineluctably, the reader comes to count these poor undocumented souls among the damned of the earth.

Some fifteen years after Goldman’s article, Hannah Arendt, fleeing Nazi Germany, wrote in a remarkably similar vein on the horrors of political statelessness. Measured philosopher though she was, Arendt felt them down to the bone, and her evocation of the void into which statelessness had dropped her is every bit as powerful as that of the impassioned anarchist who preceded her. I daresay that at this very moment, any number of undocumented immigrants and refugees all over the Western world could be sitting down to do the same, a copy of “The Tragedy of the Political Exiles” by their side.