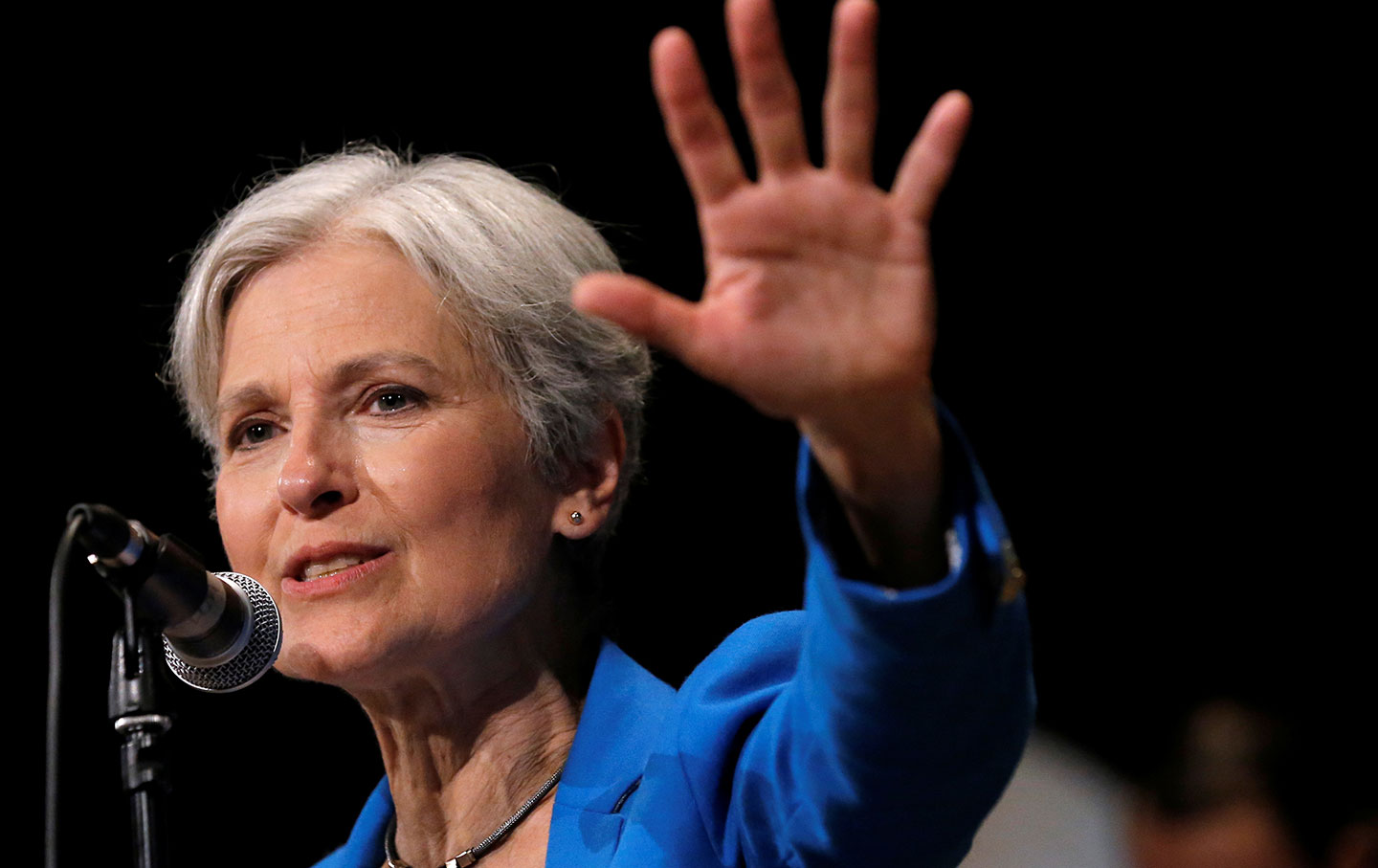 Presidential-election years aren’t usually characterized by explosive social movements. Too often, a presidential election sucks all the oxygen out of the political space, shifting the discussion away from the needs of ordinary people and toward the false choice between a corporate Democrat and a yet more horrifying Republican.

Your Vote for Jill Stein Is a Wasted Vote

But this year has proven different, with tens of thousands of people becoming politically active for the first time. Just in the last month, we’ve seen Native Americans rallying at Standing Rock against the Dakota pipeline with the largest gathering of tribes in a century. This bold stand has drawn attention to this nation’s historic and ongoing disregard for both treaty rights and the rapidly advancing crisis of climate change. And in the latest telling character note of this election, among the courageous protesters at Standing Rock for whom arrest warrants have been issued is Green Party candidate Jill Stein.

In recent weeks, we’ve seen massive support for San Francisco 49ers quarterback Colin Kaepernick and his refusal to stand for the national anthem. What’s particularly striking has been the weakness of the right in trying to stop him; in fact, support for his protest is spreading across the country. We’re seeing a tremendous shift nationwide—not to the right, but to the left. An August GenForward poll showed that 51 percent of white youth support Black Lives Matter, while another recent poll found that 58 percent of Americans support raising the federal minimum wage to $15 an hour. Support for socialism also continues to rise, part of a deeper discrediting of corporate politics and the failed capitalist system.

In the presidential election, however, ordinary people feel disenchanted and disempowered. Donald Trump is an abomination, and consistently over 60 percent of people polled disapprove of him and his bigotry. Trump is the single-most-unpopular major-party candidate ever, and he deserves to be trounced. But, incredibly, the Democrats have managed to nominate the second-most-unpopular candidate in history: Hillary Clinton, whose disapproval rating stands at 56 percent. Make no mistake: I want Trump to lose this election. But progressives should not support Clinton. Her close ties to corporate America and its brutal neoliberal agenda will serve to increase the appeal of right-wing populism even if she wins.

Clinton’s billionaire backers, who wined and dined her throughout August, want her to promise as little as possible to ordinary people for fear of a mass movement developing under her administration. They know that working people, and young people especially, are fired up in a way that we haven’t seen in decades. E-mails recently leaked from Nancy Pelosi’s office contain explicit instructions not to agree to any specific demands from Black Lives Matter.

The Democratic Party has a special talent for enabling the right. President Obama was first elected in 2008 on a wave of opposition to eight years of George W. Bush’s wars and tax cuts for the rich. But he and the Democrats continued the bailout of Wall Street and stood by as millions lost their homes—and the leadership of the labor movement and most progressive organizations gave him a pass. This created space for the Tea Party to exploit the legitimate anger of large sections of the working and middle class. It wasn’t until 2011 that Occupy Wall Street gave a genuine left-wing expression to the widespread outrage at corporate politics.

Change comes from mass movements, not from on high, as Bernie Sanders has said. His campaign proved decisively that ordinary people can build a powerful electoral movement representing their interests without taking a penny from corporate America. Polls consistently showed that Sanders would crush Trump in the election. But his campaign was trapped inside a party whose leadership was prepared to do almost anything to stop him.

We need to build a new political party, one completely free from corporate cash and influence. In fact, Socialist Alternative and I urged Sanders to run as an independent after the primaries, which would have inspired millions of people and helped lay the basis for such a party.

But it’s still possible to make a stand this year for single-payer health care, free college, a $15-an-hour minimum wage, a rapid transition from fossil fuels, and an end to endless war. That’s why I’m supporting Jill Stein. We need the strongest possible vote for her in order to continue building the power of social movements and to fight back against the right in the form of Trump and Libertarian Gary Johnson, both of whom dishonestly portray themselves as “antiestablishment” candidates.

Many progressives will vote for Clinton in spite of their opposition to her politics, simply to prevent Trump from setting foot in the White House. I understand their desire to see him defeated, but even more important is beginning the process—too long delayed—of building an alternative to the pro-capitalist parties monopolizing US politics.

Stein’s campaign is an opportunity to rally support for what is widely wanted and needed: radical change. Even a few million people voting for her would be a powerful expression of the changing political landscape. It would be a down payment for a whole new kind of politics in the years ahead, and a new party based on social movements and ordinary people—a party of, by, and for the 99 percent.

For a different view on voting for the Green Party this November, read Joshua Holland here.