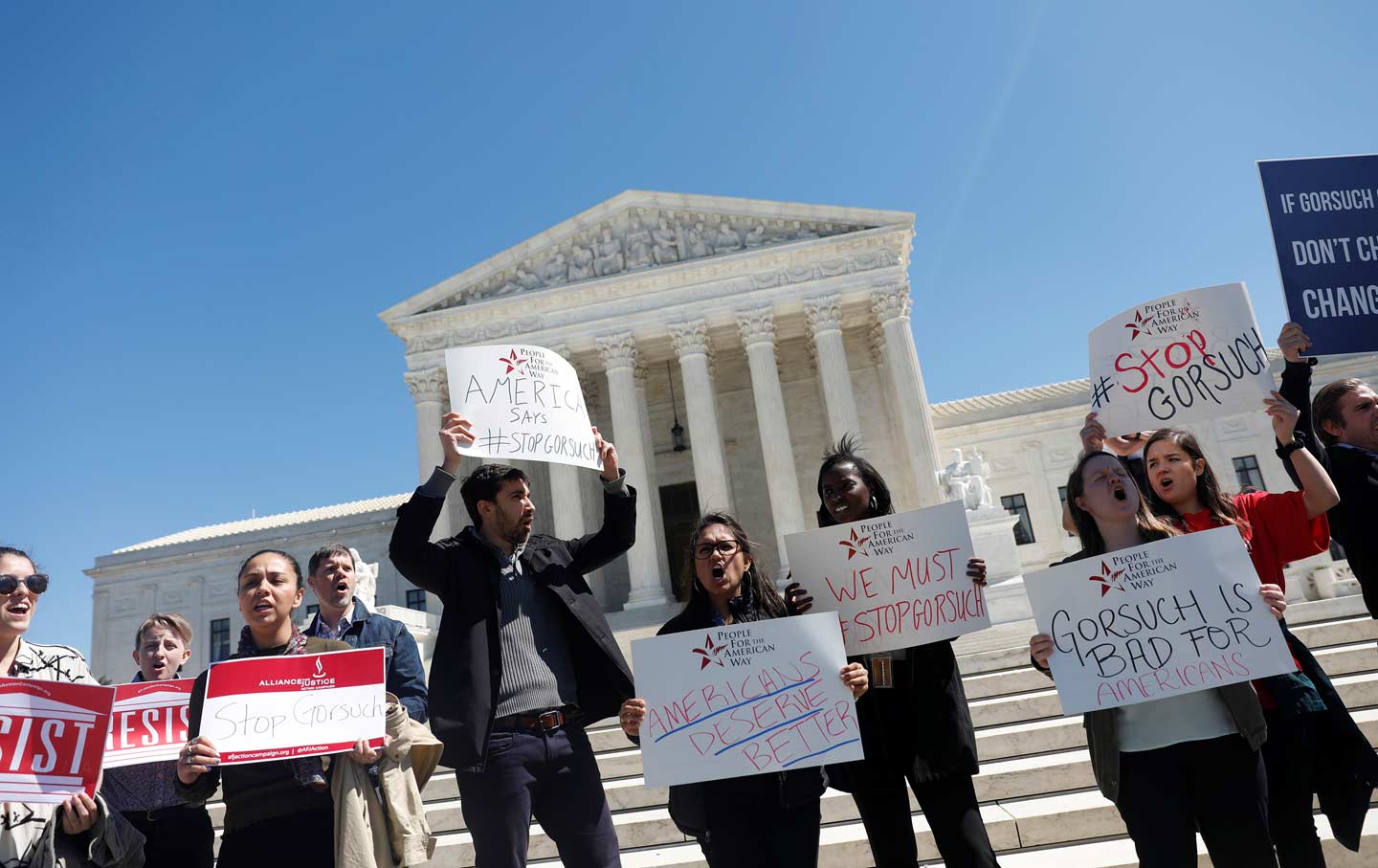 Demonstrators chant during a protest against Neil Gorsuch outside the Supreme Court on March 29, 2017. (Reuters / Aaron P. Bernstein)

The Senate Judiciary Committee approved Neil Gorsuch’s nomination in an 11-to-9 party-line vote today. But 41 Senate Democrats have now pledged to oppose Gorsuch, which gives them the votes needed to block his nomination. In response to a planned Democratic filibuster, Republicans say they’ll invoke the nuclear option for Supreme Court nominations and confirm Gorsuch with a simple majority of 51 votes. “Judge Gorsuch is going to be confirmed,” Mitch McConnell vowed on Sunday.

In addition to conservative supporters of Gorsuch, some liberal legal experts have also raised doubts about filibustering Gorsuch. “I have no doubt that a Justice Gorsuch will be awful for progressives on the issues that they care the most about: abortion, affirmative action, campaign finance, voting rights, environmental protection, gun rights, and everything else,” writes UC Irvine law professor Rick Hasen. But he cautions:2

Imagine if in a year or so Justices Breyer, Ginsburg, or Kennedy leave the Court. Then things get MUCH worse from the point of view of progressives. Then Roberts becomes the swing voter and there goes affirmative action, abortion rights, etc. If you think things with the Supreme Court are bad for progressive now they can get much, much worse.3

Better to save the firepower for that fight. It is possible that Senators like Susan Collins would be squeamish about such a nominee, and they might not vote to go nuclear. At that point, people can take to the streets and exert public pressure. At that point, the left will perhaps realize what they lost when they lost the 2016 election and how bad things will be.4

The problem with this argument is that it’s delusional to believe that Mitch McConnell—who prevented Merrick Garland from even receiving a hearing—would allow Democrats to filibuster the next Supreme Court vacancy if they allow Gorsuch to go through. If Justice Kennedy or a liberal justice like Ginsburg or Breyer stepped down and Republicans had the ability to overturn landmark laws like Roe v. Wade with a 6-to-3 vote, they would do everything in their power to make it happen and wouldn’t blink for a second about going nuclear. Moreover, because a number of red-state Democrats are up for reelection in 2018, Senate Democrats may have fewer seats and even less leverage when the next Supreme Court vacancy occurs.5

There are at least five good reasons to oppose Gorsuch now.6

The first reason is Merrick Garland. We wouldn’t even be talking about Gorsuch if Republicans hadn’t stolen a Supreme Court seat from President Obama. And now Republicans are engaged in an unbelievable rewriting of history, literally deleting Garland from recent memory. “Even President Obama’s two Supreme Court nominees were recognized for their ability to do the job and confirmed without incident,” Arizona Senator Jeff Flake wrote in The Arizona Republic on March 25. Except there were three nominees!7

Republicans must pay a price for their unprecedented obstructionism. “I have a very hard time getting over what was done to Merrick Garland, a very hard time,” moderate Democratic Senator Tom Carper of Delaware told The Washington Post. “That’s a wrong that should be righted, we have a chance to do that, and it won’t be by confirming Judge Gorsuch the first time through.”8

The second reason is Gorsuch’s own record, as I’ve written during his confirmation hearings:9

We know enough about Gorsuch to surmise that he was nominated by Donald Trump to be a smooth-talking advocate on the bench for a far-right ideology. He was handpicked by the Federalist Society and the Heritage Foundation. He has close ties to a conservative billionaire and has praised one of the GOP’s most notorious voter-suppression advocates. He’s criticized liberals for challenging gay-marriage bans in the courts. During the Bush administration, he praised the Guantánamo prison and defended harsh anti-terror policies. As a judge, he joined the Hobby Lobby decision restricting a woman’s right to choose and ruled against a truck driver who abandoned his trailer in subzero temperatures after it broke down. He’s consistently favored corporate power and corporate influence in the political process. In fact, a review of his opinions suggests he will be more conservative than Roberts and Alito, second only to Justice Thomas.10

The third reason is his refusal to answer even basic questions about his judicial philosophy before the Senate. Writes Garrett Epps in The Atlantic:11

In his answers to senators, Gorsuch seemed like a man whom one would dread sitting next to on a long airplane trip. The charm he displayed was oddly repellent; his vaunted humility was relentlessly overbearing; and his open-mindedness was rigidly dogmatic. He seemed to have trouble concealing contempt for the process, his questioners, and the public itself.12

Gorsuch was by turns condescending, evasive, and even dishonest. In fact, it’s not too much to say that he, in his aw-shucks gentlemanly way, gaslighted the committee in a genteel but nonetheless Trumpian style.13

Senators Tammy Duckworth and Catherine Cortez Masto said recently that Gorsuch refused to meet with them, which is the height of arrogance for a nominee up for a lifetime appointment.14

The fourth reason is that the president who nominated Gorsuch is under FBI investigation for colluding with Russia, which casts further doubt on the legitimacy of this process. As Elizabeth Warren tweeted, “Is the Senate really going to pretend there’s no cloud over @realDonaldTrump & move on w/ the Gorsuch nomination like things are normal?”15

The fifth reason is that Gorsuch could tip the balance of power on the Court for the next 40 to 50 years. Some argue that replacing one Scalia on the Court with another isn’t that big of a deal. Yet nearly all of the worst opinions by the Roberts Court—the gutting of the Voting Rights Act, Citizens United, Hobby Lobby, District of Columbia v. Heller—were 5-to-4 decisions. Gorsuch would immediately shift the Court to the right. On issues like voting rights, that could mean reinstating discriminatory voting restrictions and gerrymandered maps in states like North Carolina and Texas that have been blocked by the lower courts.16

Democrats might not be able to ultimately block Gorsuch but they at least need to try, as my colleague Joshua Holland writes. Put pressure on moderate Republicans like Susan Collins and Lisa Murkowski. Energize the Democratic base. Shine a spotlight on the importance of the courts. Show the public they stand for something. Caving on Gorsuch will make it harder, not easier, to wage future battles.17