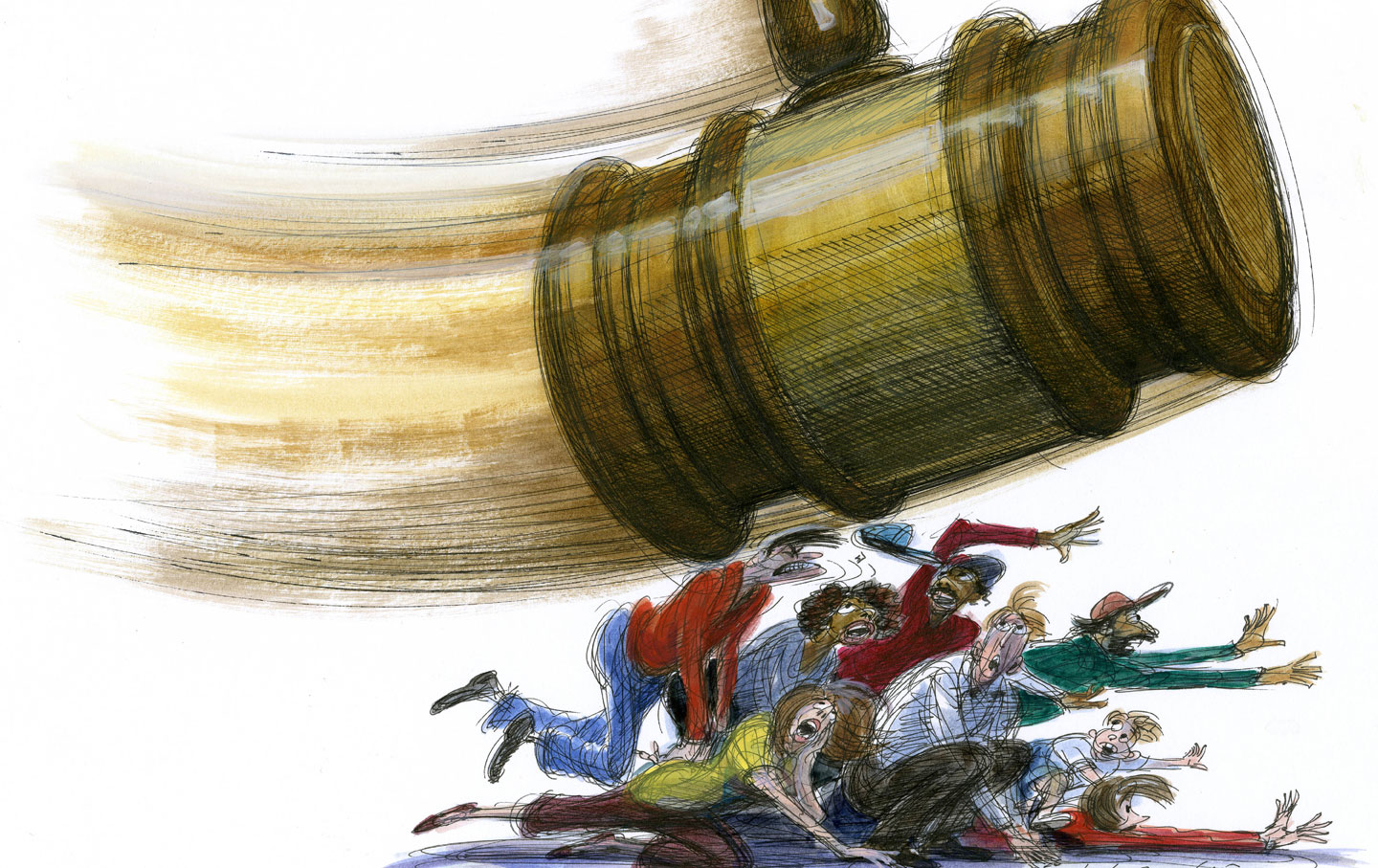 EDITOR’S NOTE: This special issue on the Roberts Court was developed in partnership with the Alliance for Justice and edited by Mark Sorkin. Additional reporting by Ethan Corey.

This is a pivotal moment for justice in America. As we approach the 10th anniversary of John  Roberts’s appointment as chief justice, we face a presidential election in which the future of the Supreme Court hangs in the balance. For decades, the Court has been a deeply conservative institution, defined largely by the Republican presidents who have appointed its life-tenured justices. Since Chief Justice Earl Warren retired in 1969, Republican appointees have outnumbered Democratic appointees 12 to four. Justices Antonin Scalia and Anthony Kennedy, vestiges of the Reagan administration, continue lending influence to a presidency that ended nearly 30 years ago. But it is also an aging Court ripe for change. Four justices (Scalia, Kennedy, Stephen Breyer, and Ruth Bader Ginsburg) will be in their 80s by 2018, likely giving the next president power to set the Court’s direction for a generation or more.

Voters will face a stark choice next year: elect a president who will reverse the Court’s long conservative trend with a new progressive majority, or one who will further solidify the legacy—explored throughout this issue—of Chief Justice John Roberts.

To show what’s at stake, The Nation has asked 10 astute Court watchers to review a case from each year of the Roberts Court, situating it within the last decade of decisions and reflecting on what it reveals about the Court’s biases.

Roberts has led a narrow conservative majority that consistently favors the powerful at the expense of everyone else.

The result is a wide-angle portrait that thoroughly debunks the myth of Roberts as unbiased umpire. Rather than provide “equal justice under law,” Roberts has led a narrow conservative majority that consistently favors the privileged and powerful (especially corporations) at the expense of everyone else (especially women, workers, consumers, people of color, and the accused). For all of its claim to judicial restraint, the Roberts Court aggressively enacts conservative policy, unafraid to overturn long-standing precedent or second-guess the elected branches in order to strike down progressive reforms.

Against this backdrop, we should question recent claims that the Court is actually more liberal than many realize. That refrain peaked last term, after the Court rejected challenges to the Affordable Care Act and fair housing and recognized a right to same-sex marriage. In the concluding article of this issue, David Cole points to the Court’s “significant number of liberal decisions,” and the roles that Kennedy and even Roberts have played in moderating its rulings, as evidence of a more balanced Court.

But such claims depend on a generous grading curve that discounts the Court’s relentless rightward progression. After 10 years of John Roberts, Americans are conditioned to judge the Supreme Court from an artificial baseline that is the product not just of the Court’s decisions, but of the cases it elects to take. The Court’s docket has provided few opportunities for truly progressive outcomes (marriage equality is one exception). Instead, every year we ask only where the Court will make shifts to the right and where it will decline to do so by affirming the status quo (with the option of doing more damage later). For progressive Court watchers, victory is rarely more than a long exhale after avoiding complete disaster.

That was true of the healthcare and housing-discrimination cases last term, which only a profoundly conservative Court would have heard in the first place. Neither involved disagreement among the courts of appeals, and neither presented a serious legal question. The healthcare case, a naked attempt to destroy the Affordable Care Act, relied on what Fourth Circuit Judge Andre Davis called a “tortured, nonsensical construction of a federal statute.” In the housing-discrimination case, the Court merely affirmed what for nearly 30 years had been the consensus of Congress and the lower courts: that the Fair Housing Act protects victims even when they cannot meet the nearly impossible task of proving intentional discrimination. That the Court declined to adopt the extreme arguments raised in these cases is hardly a victory.

Nor should we be grateful when the Court gives with one hand and takes away with the other. When the Court upheld the Affordable Care Act as a tax, it also restricted congressional power to regulate interstate commerce, the authority by which Congress has enacted vital social-welfare and civil-rights laws. And after ruling that Guantánamo Bay detainees have a right to challenge their detention in federal court, the Court has allowed lower courts to render that right nearly meaningless, refusing to intervene and require robust judicial review.

Indeed, the Court pushes its agenda by reaching for the issues it wants to decide. Sometimes this is explicit. As Senator Sheldon Whitehouse explains, Citizens United began as a more modest statutory case before the Court ordered a broad constitutional attack on campaign-finance law. That order teed up the decision that overturned precedents and allowed corporations to influence elections with unlimited spending.

The rest of the 2015 docket fits the same pattern, with a lineup of cases that have progressives playing defense on familiar issues. Following the rulings discussed in this issue by Herman Schwartz and Arthur Miller, the Court has taken a trio of cases that could eviscerate class actions, leaving victims of widespread harm without legal redress. The Court has also targeted affirmative-action policies once again, and could further limit remedies to racial inequality—an issue that William Yeomans explores in these pages—when it reviews Texas’s use of race in college admissions. Evenwel v. Abbott is a new attack on voting rights that could give greater electoral power to rural white residents over minority urban residents. And, as Dahlia Lithwick notes, the Court could also address antiabortion laws that threaten to extinguish the right to abortion for low-income women.

So the question is: What does all of this mean for 2016? On the right, we see a demand for a Court even more extreme and reliably conservative than it is now. We also see an urgency in using the Court’s slim conservative majority, which could be undone with just one new appointment. In Friedrichs, this term’s attack on labor, the plaintiffs so badly wanted their case to be heard by the Supreme Court—this Supreme Court—that they asked every lower court to dismiss their case to help move things along.

The rest of us must ask what we want in our Supreme Court. Will we be distracted by the few issues, such as marriage equality, in which Justice Kennedy steered the Court toward progress? Will we be placated by Roberts’s occasional willingness to back away from right-wing extremism? Or will we look critically at the last decade of decisions, recognize how the Court has failed those Americans who need it most, and seize this opportunity for change?