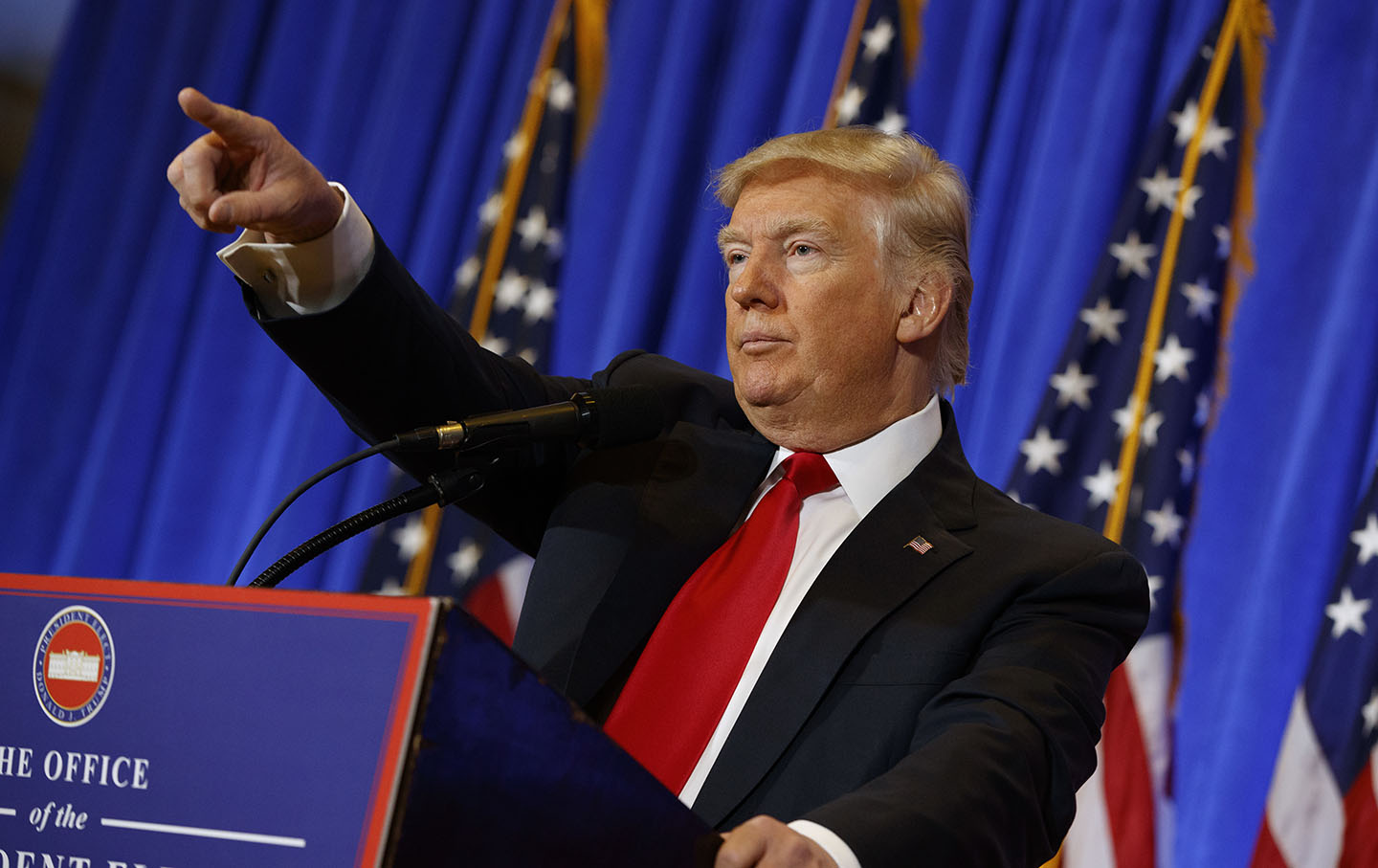 President-elect Trump calls on a reporter during a news conference in the lobby of Trump Tower, on Wednesday, January 11, 2017. (AP Photo / Evan Vucci)

Hillary Clinton’s presidential campaign sensibly concluded that Donald Trump was so obviously unfit for office that he could not be elected. He was shockingly unprepared, corrupted, juvenile, poisonous, and often simply repugnant.1

The argument was surely true, but not sufficient. It focused the campaign on personal character—not a Clinton strong suit. It left voters without a clear sense of what Clinton was for, other than more of the same. It isolated Trump from the right-wing congressional Republicans and their tired and failed agenda. Clinton won the argument and the popular vote. Polls showed voters rated her far better than Trump came to temperament, judgment and experience.3

Trump closed with ads about the corrupted establishment that had failed working people, promising to “drain the swamp,” and mixing his toxic politics of division with pledge to bring jobs back, end ruinous trade policies, and rebuild America. “[It] used to be cars were made in Flint and you couldn’t drink the water in Mexico. Now cars are made in Mexico and you can’t drink the damn water in Flint,” he said. Trump became the candidate of change when a good portion of Americans was ready to shake things up.4

In the madcap first month of the Trump presidency, he’s issued continuous fusillades of stunts, rants, weaponized tweets, lies, transparent corruptions and secreted curiosities that drive the news. The embarrassing incompetence and mismanagement prove once more he isn’t up to the job. And the scandals naturally rile up the Democratic base.5

Most titillating, of course, are the shadowy Russian connections. Russian interference in the US election is outrageous, if true. The reported exchanges between Russian officials and Trump associates before the election certainly create suspicion. Trump’s bizarre unwillingness to criticize Putin feeds it. The possibility of collusion before the election has Democrats thinking Watergate, and possibly impeachment.6

The possibility is too salacious to ignore and lends itself to perfervid rhetoric. “The Russian noose is tightening around Trump,” said progressive Robert Reich.7

“Its Time to Investigate Trump’s Kremlin Klan,” wrote Representative Maxine Waters in a dear colleague letter. The Americans for Tax Fairness Action Fund has collected 450,000 signatures demanding the Congress force the release of Trump’s tax returns to investigate for Russian connections. Rep. Jerry Nadler has filed a resolution for an impeachment proceeding. Another group seeks funds to support effigies of Trump as “Putin’s puppet.”8

Obviously, Russian interference in the election merits investigation. Prior collusion would constitute possible grounds for impeachment. Secret financial dealings or perverse stunts in Russia that could compromise the president need to be exposed.9

Yet as a purely political strategy, is this the failed Clinton approach all over again? Once more the subject – Trump’s connections with the Russians – focuses on his personal shortcomings and dealings. Once more it separates Trump from his Goldman Sachs economic team or the Republican Congress that is salivating at the prospect of pushing through its predatory agenda.10

And while Democrats are talking about the Russians and the last election, Trump is on message, in his own, circus-barker fashion. In his inaugural address, first press conference, first 2020 presidential campaign rally, and first address to Congress, he focused on jobs and fighting for America’s working people. He boasted about torpedoing the TPP and changing our trade policy, bullying companies to bring jobs back or keep them here, promising a major infrastructure plan, pumping up the military budget, going after Muslims and immigrants, pledging to replace Obamacare with better and cheaper insurance.11

Using the press – the enemy of the American people –as his foil, he claims his chaotic administration is in fact a “fine tuned machine” and that he’s working to keep his promises.12

His patter, of course, is the come-on of the big con. Beneath the promise that Republicans are now “the party of working people” is a Goldman Sachs economic team intent on deregulating Wall Street, reopening the financial casino and rolling back consumer and investor protections. The cabinet of generals, billionaires and ideologues is gearing up to roll back environmental protections, subsidize big oil, and King Coal, lard up the already bloated military, privatize everything in sight, cut taxes on the rich and corporations, and slash public support for the most vulnerable.13

Democrats must expose this, indicting Trump and his Republican congressional accomplices. Trump’s cabinet appointees provided the first target, and Democrats and their mobilized base did decent work in exposing the nominees to more scrutiny and more opposition than normal. Trump’s budget provides the second opportunity, even though budgets are a blur for most Americans.14

Amid Trump’s constant distractions, Democrats have to keep redirecting the spotlight onto the Goldman Sachs raid on the economy, starting with the effort to deep-six the simple rule that investment advisors shouldn’t cheat their customers when advising on retirement accounts, the so-called fiduciary rule. There’s also Trump’s assault on workers – the opposition to hiking the minimum wage, the campaign to break unions, the coming repeal of reporting on CEO pay, and more.15

And Democrats have to find a way – as Bernie Sanders and Elizabeth Warren have demonstrated – to constantly show people there is an alternative. Trump’s agenda should be contrasted not with the past, but with the possibility of Medicare for all, expanded Social Security benefits, tuition-free college, progressive taxation, a real plan to rebuild America, and a commitment to a Green New Deal that will generate jobs in capturing this century’s energy markets.16

None of this will be easy. Obama and the Democratic establishment want to contrast Trump’s chaos with Obama’s accomplishments, but that is a loser’s play. Efforts by Democrats to offer clear alternatives – like the Senate Democratic infrastructure plan that Senate Minority Leader Chuck Schumer rolled out – find it hard to gain attention amid the Trump clamor.17

Trump will continue sowing division that people of conscience must mobilize to resist. His law-and-order rhetoric will unleash police and spark popular reaction. His assaults on Muslims and immigrants can’t go unanswered. His attack on the press, while popular, must be opposed. Democrats have to lead, not simply follow, their activist base as they mobilize in response to attacks on women, people of color, the LGBT community and more.18

At the same time, Democrats need to keep the spotlight on Trump’s fraudulent sales pitch to working people that he’s their champion while he’s actually pushing the agenda of the one percent.19

The alleged Russian interference in our elections demands independent investigation. But Democrats must avoid fixating on that. They can’t allow Trump to be strutting about the jobs he’s saved while Democrats are railing about Russians and the last election.20

Schumer recently called an emergency meeting on how to address the Russian scandals. He would be well advised to call regular meetings on how to expose Trump’s flim-flam while demonstrating to Americans who is really on their side.21