Uighurs in Brussels shout slogans and hold Uighur flags during a protest against internment camps for Muslims in China on October 1, 2018. (AP Photo / Francisco Seco)

Last February, after nearly four months of interrogations and being forced to sit through lectures extolling the greatness of the Chinese Communist Party, Khayrat Samarkand tried to kill himself in the cell he shared with a dozen other men. “I threw myself at the wall and hit my head repeatedly on it until the guards came,” he said.

Samarkand’s injuries were so severe that after a day of treatment in a hospital, the guards simply let him walk out. He crossed the border into Kazakhstan, one of a handful of witnesses to the mass detention of Muslim ethnic minorities in China’s western Xinjiang region.

The UN Committee on the Elimination of Racial Discrimination said this August that at least 1 million Muslims—ethnic Uighurs and other minorities—in Xinjiang were being “held incommunicado…without being charged or tried, under the pretext of countering terrorism and religious extremism.” In massive camps called “reeducation” centers, detainees are subjected to round-the-clock surveillance and attend classes where they are coerced into shedding traditional Islamic practices like praying, wearing a headscarf, growing a beard, or abstaining from pork and alcohol.

The Dark Side of the Chinese Dream

On November 14, a group of 16 senators, including Republican Marco Rubio and Democrat Bob Menendez, introduced a bill that would impose sanctions on Chinese officials involved in the mass detentions in Xinjiang. The bill also mandates that federal agencies, including the State Department and FBI, issue regular reports on the treatment of Uighurs in Xinjiang. “In an alarming development that may constitute a crime against humanity,” said a statement by Senator Rubio and Representative Chris Smith, “China has placed as many as one million or more Xinjiang residents in ‘political re-education’ camps.”

Chinese officials initially denied the existence of the camps, saying the measures in Xinjiang are being taken to thwart terrorist attacks by Uighur separatist groups. Yet this October, officials in Xinjiang admitted that the mass detention program existed when the region’s People’s Congress passed legislation that ostensibly seeks to “transform” locals affected by “extremism” using various means, including “ideological education, psychological counseling, behavioral correction, Chinese language training,” and other measures.

The sheer scale of the campaign, and its nature, is difficult to hide, with evidence about thousands of reeducation camps for adults and state-run boarding schools for children coming from witnesses like Samarkand as well as from official documents and state news reports available on the Internet. Publicly available documents on materials to be procured at the centers indicate that the facilities resemble prisons more than schools. Authorities in the Hotan prefecture, for instance, ordered 2,768 police batons, 550 electric cattle prods, 1,367 pairs of handcuffs, and 2,792 cans of pepper spray for such centers in 2018.

Beijing has long placed religious and cultural restrictions on Xinjiang, like barring minors from attending mosques and schoolchildren and any government workers from fasting during Ramadan. Detentions of suspected extremists began in 2014, but picked up dramatically in 2016, after a top party official, Chen Quanguo, was tasked with applying his experience from quelling unrest in Tibet to Xinjiang. “Now, we find a large-scale detention campaign sweeping up really hundreds of thousands of Uighurs, often indiscriminately, with no accusation of any particular crime,” said Adrian Zenz, a researcher at the European School of Culture and Theology in Germany.

Zenz says China’s ruling party issued an order to undertake a “de-extremification” and “reeducation” program, mandating that facilities be established at the township, prefecture, and city levels—a total of 1,200 administrative units. Construction bids subsequently confirmed that these facilities were built, and researchers like Zenz have been able to locate scores of them in satellite images. Little official documentation is available on what is going on inside the facilities, Zenz said, but, he adds, “we know infrastructure was built, that people are being kept there, and they are trying to produce what you would call a ‘hard change’ in them.”

The official documents provide further clues to what Quanguo had in mind. The reeducation centers, one document reads, should “teach like a school, be managed like the military, and be defended like a prison.” Another document says that in order to produce a change in the detainees, the centers must “break their lineage, break their roots, break their connections, and break their origins.”

The campaign, said Rian Thum, a China historian and senior research fellow at the University of Nottingham, invokes memories of the Cultural Revolution, the 1966–76 period of mass internment across the country aimed at disseminating Mao Zedong’s Communist ideology. “It’s similar because, as in the Cultural Revolution, there is a widespread fear among people that they will be punished severely for very minor expression of their thoughts and beliefs, and in unpredictable ways, and that they will be exposed or turned in by relatives or friends you used to trust.”

“But people forget there was in some ways a lot of grassroots energy behind the Cultural Revolution,” Thum argues, “and what we are seeing in Xinjiang today is very much organized from the highest levels of the party bureaucracy.”

In Samarkand’s case, officials seemed to be targeting him because he had traveled to Kazakhstan and attended a mosque there. He spent three months under police interrogation, most of the time chained to a metal chair and blasted by loudspeakers, asked to supply the names of other Uighurs he knew in Kazakhstan. He spent his last month in a reeducation camp, where he and more than 5,000 other detainees spent each day singing songs praising President Xi Jinping and learning about how the Chinese Communist Party was working to bring Xinjiang into the modern world. Samarkand now lives in Kazakhstan, but a sister of his in Xinjiang is in a reeducation camp.

Abdusalam Mehmet, a 40-year-old restaurant cook who now lives in Turkey, was detained after someone reported to police that he had recited verses from the Quran at a funeral for a neighbor. Police interrogated him for four months, then ordered him to complete a course in a reeducation camp in Hotan.

“The only thing I learned in that camp was how cruel the Chinese can be,” said Mehmet.

Mehmet was released from the camp after 50 days. He returned to his home in the city of Hotan, where the attempts at molding Uighur culture were continuing.

Mehmet and the other adults in his neighborhood were forced to attend evening meetings in the local municipality building. “In the beginning they used to pass out flyers, but later they started coming around in a car with a loudspeaker, or using loudspeakers installed on light posts,” he said. “They would just say, ‘We are having a meeting, you must come or you will be punished,’ and they could call them at any time, even in the middle of the night.… We went sometimes together with our neighbors, if there was enough time to go together; other times we had to run.”

At the meetings, which Mehmet says drew hundreds of people, officials repeated the same things he heard in the reeducation camp, warning over and over against “the three evils of extremism, terrorism, and separatism.” 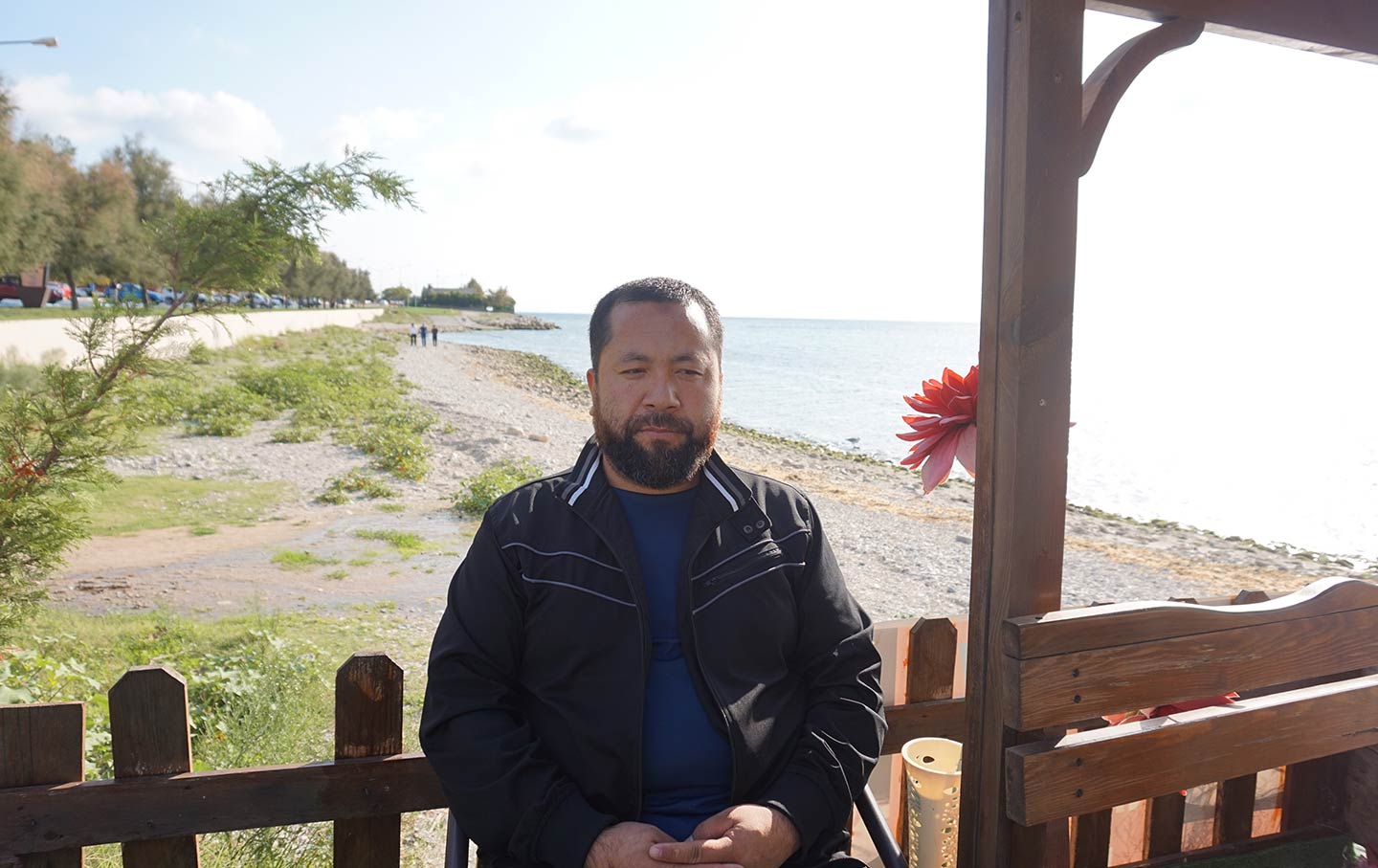 “They told us how to basically live our daily life. They did not make praying illegal, or fasting during Ramadan illegal, but they would say you cannot pray with guests or relatives in your home,” he said. “Basically, they said you can do these things, but you cannot do them actually, because they were things that would get you into trouble.”

Locals were told that each district had a quota, a certain number of people they had to send for reeducation each day. At checkpoints set up all over town, police pored over cell phones in search of unsavory religious material. “They were very dangerous for us because we didn’t know of any rule for who was being arrested and why, so whenever you pass them you are afraid,” he said. “You just hoped when you crossed a checkpoint that they had already met their quota that day.”

Even those Uighurs outside reeducation camps, Thum says, are required to attend the meetings, which in some cases draw tens of thousands of people. Locals are drilled on Islamic practices that are deemed extremist and asked to report anyone—even their own family members—who continue to do things like pray or read the Quran in their homes.

Medina Abdulghani, 18, who moved to Turkey three years ago, recalls being left alone at home with her younger siblings as all the adults in her family attended town meetings. Her father fled China and moved to Turkey in 2013, leaving her in the care of a mother who tried to shield her from what was going on in their village, outside the city of Kashgar.

Abdulghani’s mother left the house each morning to join other locals in a daily ceremony to raise the Chinese flag, and on some weekends attended the town meetings. When she asked her mother what happened there, she would dodge her questions, saying only that it was too dangerous to talk about.

Abdulghani last spoke to her mother two years ago, through voice messages sent on a social-networking app. “She didn’t really say anything at all, except that we should not contact her again.” Her mother soon stopped communicating with her entirely, simply posting a picture of herself standing in a street outside their home, no longer wearing a headscarf or a long dress, but instead in pants and a shirt. Six months ago, Abdulghani learned from a relative in China that her mother, grandmother, six uncles, and three aunts were sent to a reeducation camp. Dozens of children, including Abdulghani’s siblings, were put into a primary school that was now run by the state, and they were barred from any contact with the outside world.

Mehmet moved with his wife and children to Turkey in 2016, but soon after was no longer able to reach his family back in China. He later learned through a friend that his parents, three brothers, and one sister had been sent to a reeducation camp.

“If there was no extremism in Xinjiang before, the Chinese government is going to force people to become extremist now,” he said. “If you take my brother away one day, my sister the next day, if you forbid my language, forbid me from learning my own history, you will force someone to take some action.”