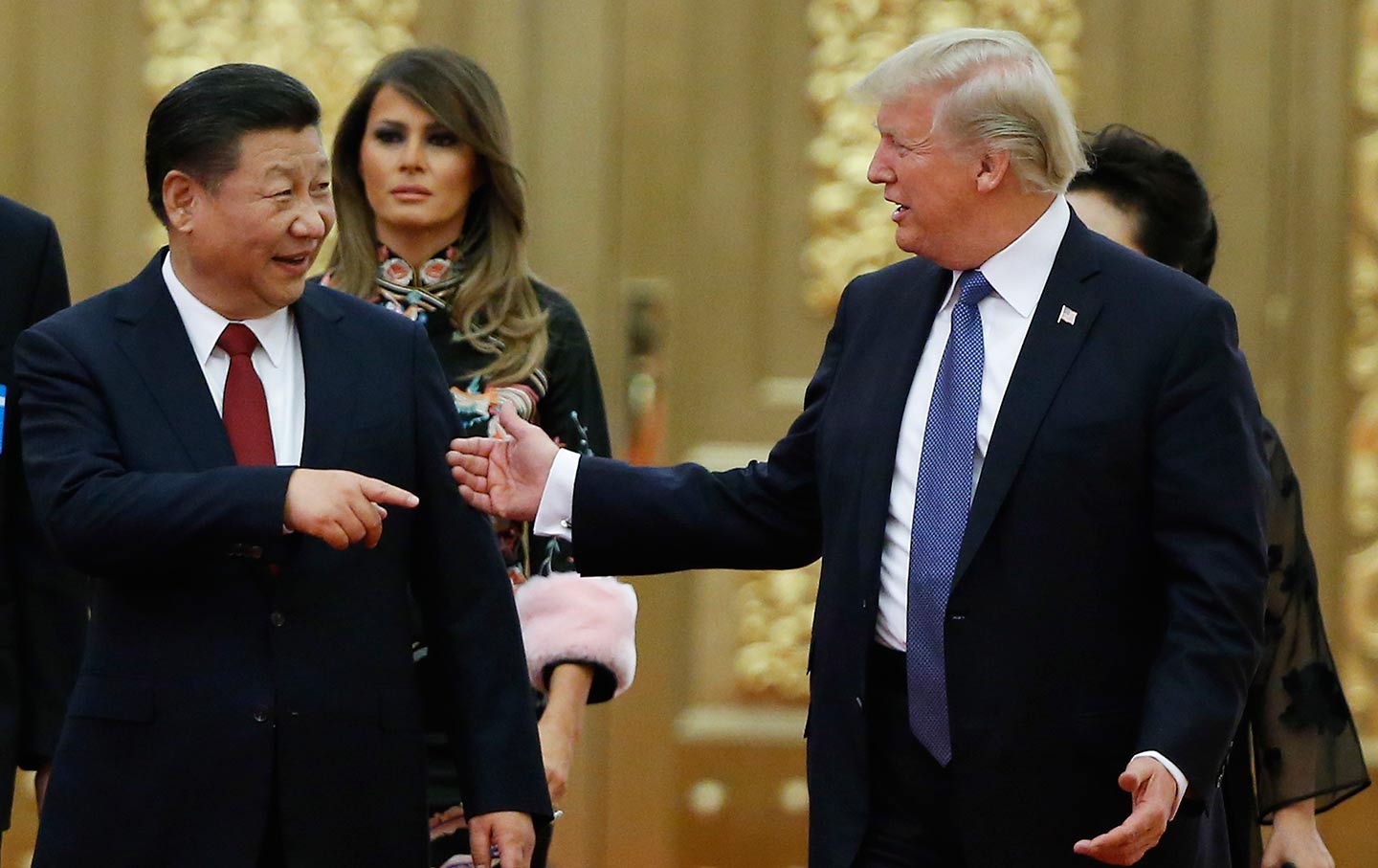 Donald Trump and Xi Jinping arrive for the state dinner at the Great Hall of the People in Beijing, China, November 9, 2017. (Thomas Peter / Pool Photo via AP)

Donald Trump got one thing right in his campaign: Americans should worry about China. But trade is not the reason. Over the past year, the country has let a Nobel Peace Prize winner die in prison—something that last occurred in the Nazi era. A vast new network of secret extrajudicial internment camps have swallowed up as many as 1 million members of one of the PRC’s minority ethnic groups, the Uighurs, who are concentrated in the region of Xinjiang and are predominantly Muslim. And, for the first time since Stalin’s day, the head of one of the world’s two biggest economic and military powers has largely secured his ability to rule indefinitely.

Since Beijing has long had a reputation for illiberalism and repression, it would be easy to chalk up these developments as more of the same from a Communist Party that, with the world watching, used tanks and automatic weapons to crush peaceful protests in 1989. But many of the most disturbing developments in Xi Jinping’s China are symptoms of change, not the status quo. When five leading women’s-rights activists were detained in 2015 for organizing much like they had done before, it was news. Today, an individual can be imprisoned for up to three years for showing disrespect toward the national anthem not because of an old law but a new one. It is telling that the law in question will be enforced not just across the mainland but also in Hong Kong, a specially governed region of the country where much more freedom of expression has traditionally been allowed. It is also not business as usual that minority groups in China are now not only being threatened with censure if they disrespect the anthem, but being forced to assemble for flag-raising ceremonies and loyalty pledges.

For those in China who hoped to see room for dissent expand, these shifts show that the bad old things they hoped their country had left behind are still part of its present. Beijing specifically introduced term limits in the 1980s to avoid the leader-for-life pattern of Mao’s time; these have since been jettisoned. An end to reeducation camps was hailed as a sign of progress; now they are back with a vengeance across Xinjiang, a massive territory more than twice the size of Texas.

Wang Dan, the Tiananmen activist who topped the nation’s most-wanted list in 1989, was released on parole in 1993, two years into a four-year sentence. Then, in 1998, he was freed three years into a different 11-year sentence so that he could receive medical treatment abroad. Contrast that with 2010 Nobel Peace Prize laureate Liu Xiaobo’s fate: prevented from going to the West for treatment after being diagnosed with cancer, and dying while still serving out his own 11-year sentence. His wife, Liu Xia, though charged with no crime, remains under house arrest. This shows that the kind of guilt-by-association common during the Cultural Revolution was not dead, but merely dormant.

One factor that can prevent those outside China from fully appreciating the extent of these changes is that the Communist Party deploys different forms of control in different areas. Hong Kong residents enjoy more freedom than denizens of mainland cities, while some minority regions suffer under what The Economist described as “a police state like no other.” The casual visitor to Shanghai sees neither protests like those in Hong Kong, because they are not allowed, nor the constant military parades, barbed-wire-lined streets, and ubiquitous checkpoints found in Xinjiang.

Paying attention to events in China, even as other world news clamors for attention, is important in part because of Beijing’s newfound economic clout and global power. Xi feels the country’s global position is strong enough that Beijing runs little risk when it scoffs at international-court decisions, as it has when building military bases in the South China Sea, or interns hundreds of thousands of Uighurs without due process in a manner that meets the definition of a crime against humanity.

Rather than resisting this culture of impunity, the United States has been helping bolster it. Despite worsening human-rights violations in China, influential Americans from the president to the CEOs of Apple and Facebook have been praising Xi’s policies and showing him more deference than they did his predecessors. The Trump administration’s withdrawal from the UN Human Rights Council only validates Beijing’s tendency to flout international norms, as we saw this month when it attempted to gut funding for the UN’s humanitarian programs.

Weaker states and leaders of smaller economies would face grave international consequences for these kinds of actions. But China, much like the United States, now has the power to ignore global opinion and its own legal commitments. This is even easier to do when a distracted world isn’t watching.