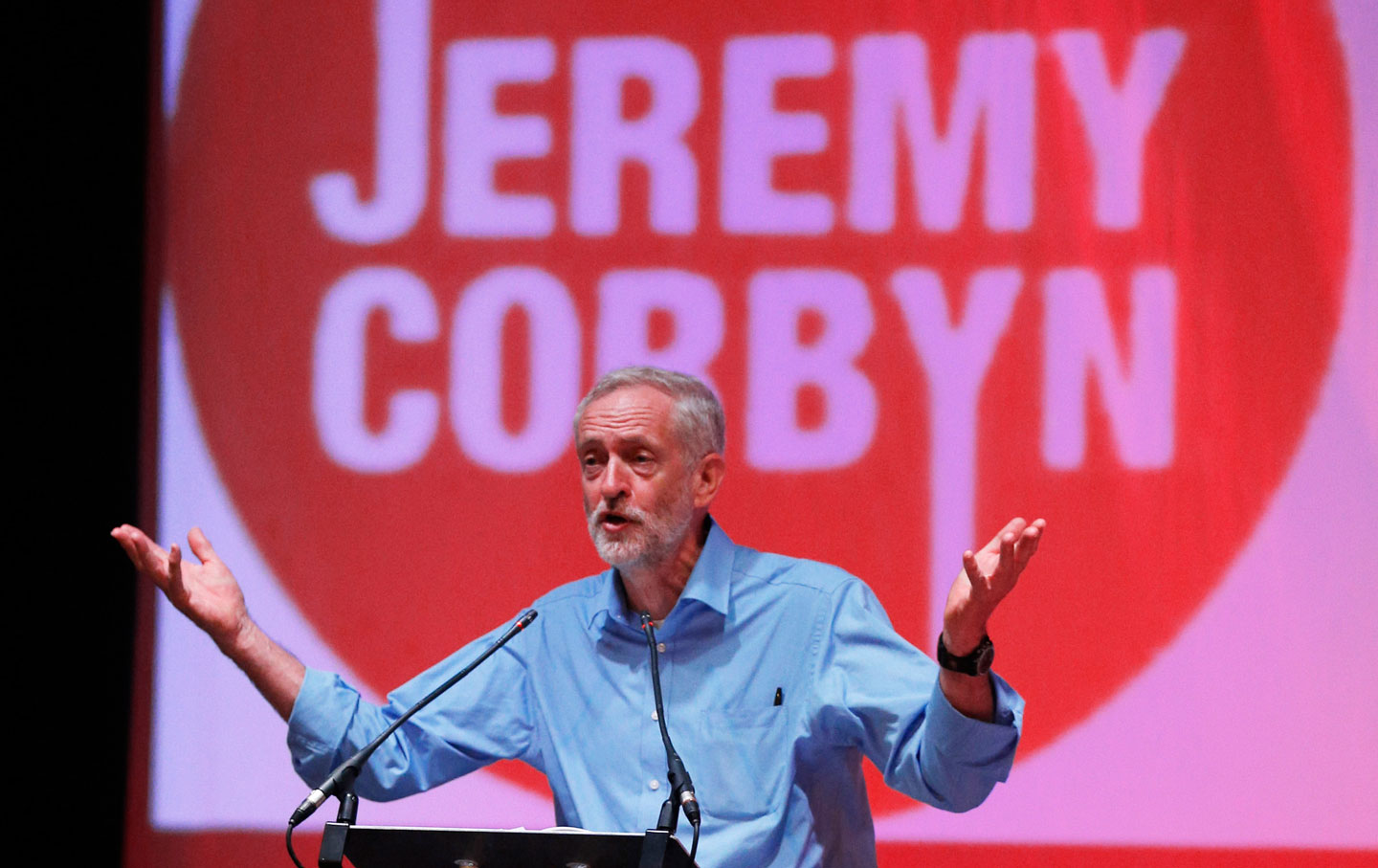 London—As if to underline the magnitude of the political earthquake that struck Britain this morning, Jeremy Corbyn, the newly elected leader of the Labour Party, said that his first official act would be to attend a “Refugees Welcome Here” rally today in London. A 100-to-1 outsider when he entered the race at the beginning of the summer, the veteran left-wing MP and chair of the Stop the War coalition had trouble scraping together the 35 nominations from his fellow Labour members of parliament. Branded a fringe figure by the media and party insiders, Corbyn’s forthright opposition to austerity—he was the only one of the four leadership candidates to vote against the Conservative government’s punitive new welfare bill—brought hundreds of thousands of new members and supporters into the Labour Party. Yet when the votes were counted, Corbyn won nearly 60 percent of the total, giving him the largest mandate of any leader of any British political party—ever.

In a magnanimous victory speech, he thanked each of his opponents, citing Andy Burnham’s dedication to the national health service and saluting Yvette Cooper for her efforts in recent weeks to prod Britain to do more for refugees. Even Liz Kendall, the most unabashedly Blairite candidate, who disagreed with Corbyn on nearly every issue, was thanked for the friendly tone of their debates and praised for having the courage of her convictions. Holding his party together will be Corbyn’s first big challenge. Several MPs, including Cooper, have already ruled out serving in the new leader’s shadow cabinet—the group of opposition legislators whose job it is to provide opposition to government ministers and to be prepared, should Labour win the next election, to take over their jobs.

As someone who has spent his entire career defying the Labour leadership, Corbyn may well find it difficult to impose party discipline. However, with the next parliamentary election still nearly five years away, Corbyn has plenty of time to figure that out. The more immediate challenge will come from Britain’s overwhelmingly right-wing press—and from the Conservatives, who now face a parliamentary opposition led by a man whose candidacy was backed by just 15 of Labour’s 232 MPs, and whose views on a host of issues are at variance with most of the legislators in his own party. Current Labour MPs, for example, were elected on a platform that pledged to renew Britain’s Trident nuclear weapons system—a move Corbyn has consistently opposed. Expect the Tories to use that issue, and others where Corbyn is to the left of his parliamentary colleagues, to try to split the Labour party. Nor can Corbyn count on support from the Scottish Nationalists, whose leader, Nicola Sturgeon, greeted his victory by tweeting that “if Labour can’t quickly show that they have credible chance of winning UK election, many will conclude” independence is the only way to derail the Tory agenda.

But as Sturgeon as is far too astute not to realize, Labour’s unexpected opening to the left brings opportunities as well as dangers, especially in Scotland, where a Corbyn campaign event last month sold out in a matter of hours and had to be moved to a larger venue. Winning back even half of the 40 seats Labour lost in Scotland would go a long way to countering the argument that Corbyn’s left-wing views render the party unelectable.

Preoccupied by its leadership contest for the past several months, Labour’s inward gaze has been a gift to the Tories. In August, when the government’s own figures showed that 2,300 people died after being deemed “fit for work” and having their benefits removed, the story was just a blip. So Corbyn’s first task will be to turn a fractious, deeply divided party into an effective opposition. At the same time, he’ll need to find a way to start to bridge the very real political gap between Labour MPs and rank-and-file party members. But those who expected a Corbyn victory to tear the party apart will probably be disappointed. Corbyn’s conciliatory language, and his rapid disavowal of a proposal for mandatory re-selection of MPs (which would have made it easier to replace dissidents), were doubtless calculated to reassure colleagues. More importantly, the scale of Corbyn’s victory should be enough to discourage plotters—at least for a year or two.

In the meantime the party faces its first electoral test in May, when Londoners choose a successor to mayor Boris Johnson. Sadiq Khan, who was chosen as Labour’s candidate on Friday, defeating former culture secretary Tessa Jowell, is a Muslim bus driver’s son who was a human-rights lawyer before becoming an MP in 2005. Though considered less radical than Corbyn—he served as a party whip in Gordon Brown’s government, and managed Ed Miliband’s successful campaign for Labour leader—Khan is a formidable campaigner who will offer a sharp contrast with his probable opponent, Zac Goldsmith, the affable (and environmentally friendly) son of a billionaire tycoon.

It is of course possible, even probable, that the wheels will come off the Corbyn express long before it reaches Downing Street. In the contest between organized money and disorganized labor, only an optimist, or an idealist, would bet against capital. The fate of Syriza, which rallied the Greek people with a message of defiance and then were forced to bend the knee to the bankers’ demands, offers a warning (as it was meant to).

Still, it is worth asking ourselves what might happen if all of the new members Corbyn brought into the Labour Party decide to stay engaged, and mobilized, and turn the party’s record of lip-service socialism into a more serious challenge to the established order. If he accomplishes nothing more, Jeremy Corbyn’s victory has finally freed his party from the dead hand of Tony Blair.