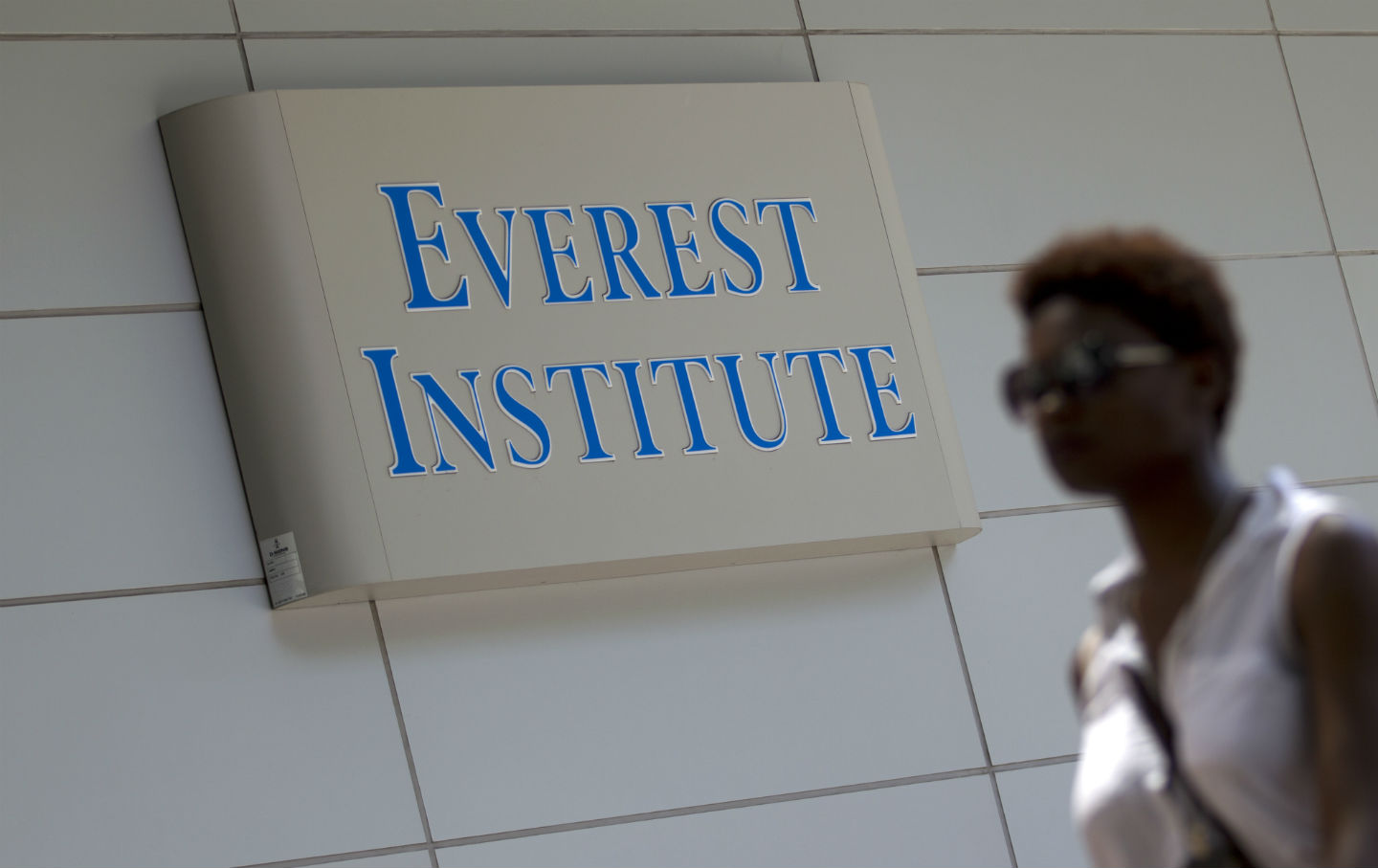 If you’ve been cheated by a financial scam masquerading as a trade school, should you have to beg for forgiveness? Even the language we use for protecting people from debt—“forgiveness,” “forbearance,” “relief”—seems to implicitly lay blame on the borrower, not the system that roped them into debt bondage in the first place. But this week in Washington, DC, anti-debt campaigners are unapologetically demanding full “debt abolition,” arguing that not only should defrauded students not owe a cent, they deserve a full refund.

The Occupy-inspired Debt Collective has escalated its challenge to the Department of Education (DOE) by invoking an obscure legal mechanism to petition against their federal loan obligations, known as Defense to Repayment. If you haven’t heard of DTR, that might be because Washington hasn’t exactly gone out of its way to publicize this. A squib on an official borrower’s website explains, “In some cases, you may assert, as a defense against collection of your loan, that the school did something wrong or failed to do something that it should have done.” If you hold some of the $1 trillion education debt load overhanging the economy, you may qualify!

Legally speaking, organizer Luke Herrine tells The Nation, “The legal claim of Defense to Repayment is different from say forbearance or income-based repayment, in that it challenges the very validity of the loan in the first place and would merit a complete discharge of the loan,” which would relieve future repayments and provide a refund.

DTR is one arrow in the quiver of a national campaign against the Corinthian College chain, notorious for running diploma mills targeting low-income and veteran students and students of color—part of a “career and technical” school system enmeshed in financial and regulatory scandal.

While individual borrowers collectively push back against debt, the overarching message of the campaign has always been that the DOE has the power and the responsibility to cancel outstanding debts that have condemned many to a lifetime of financial insecurity. The Corinthian crisis in particular is intensifying as the company teeters on the edge of bankruptcy and former students are left in debt purgatory.

Meanwhile, Corinthian has struggled to broker a bailout—having scarfed up about $1.4 billion in federal student aid per year for its tens of thousands of students—while the market for publicly traded for-profit schools collapses. In a recent letter to Education Secretary Arne Duncan, activists stated:

Although you have shown a good deal of leniency in dealing with Corinthian’s management, you have paid students like us hardly any attention. Collectively, we owe you tens of millions of dollars in student loans incurred for what have proven to be worthless degrees.

Ann Bowers, one of about 100 Corinthian students-turned-debt resistors, declared that the DOE, not the debtors, has fallen behind on its financial obligations: “Not only does the law tell them to erase our debts, it’s the right thing to do. If they really thought their job was protecting students they would have done it already.”

Protesters representing about 100 current and former Corinthian students are meeting on Tuesday with officials with the Consumer Financial Protection Bureau (CFPB) as well as the DOE. Though the financial watchdog agency lacks direct regulatory authority over the DOE, it has expressed general concern about unjust financial practices that have fueled the for-profit college model.

CFPB’s student loan ombudsperson Rohit Chopra has written to the strikers, stating that the CFPB would like to discuss potential “ways to address the burden of their student loans.”

The DTR drive aims both to add legal muscle to the anti-debt actions and to present a deeper argument in the court of public opinion: their debt isn’t the students’ problem, it’s the higher education industry’s shame. Thus the Debt Collective advanced a borrower’s rights message in its statement on this week’s actions:

Together with the Debt Collective, hundreds of current and former Corinthian students will submit simultaneous Defense to Repayment claims on the steps of the Department of Education. By submitting these claims, these students are testing the Department’s commitment to the law and to student protection.

The Debt Collective wants the DOE ultimately to create an orderly, transparent system for future DTR petitions made by student borrowers who have become entangled with predatory or dysfunctional college programs.

“I think part of the reason that the Department’s lollygagging on the issue is that it realizes that it won’t be the last discovery of a systemic series of fraudulent behavior by for-profit colleges,” Herrine says. But if the Department’s mandate is to foster access to higher education, he adds, “They should be somewhat proactive about helping students get their money back when their school has defrauded them—that seems like it should be a priority of a department that’s supposed to protect the interest of students and education in this country.”

The Corinthian activists have launched a multi-pronged campaign of debt resistance, including campaigning to wipe out private loan debt, demanding cancellation of federal loans, and civil disobedience actions.

The central principle is that if you want to pursue a higher education, you should owe nothing to anyone. The education-debt crisis reflects the financialization of the education system—whether through usurious for-profit institutions, or high-risk private student loans that finance both public and private schools, or the student loan industry in general. The push to marketize college not only drains resources from public institutions and core instructional programs, but also potentially hampers long-term social mobility for lower-income students.

In 2012, seven in ten new college graduates had taken out education loans, according to Pew Research, typically borrowing “more than twice that of college graduates 20 years ago.” For an indebted generation, the question is: why isn’t higher education a right, rather than a commodity? Or as debt striker Hollie Chaffee proclaimed, “Education should be there for everybody.” Right?

Education officials have no clear answer to the Debt Collective’s challenge yet. But Herrine says the government “could end this entire situation tomorrow. They could erase all these students debts automatically and immediately.” While waiting to collect on the moral debt they’re owed, activists are moving ahead by wiping their slates clean, no strings attached.