In mid-December, some 114 members of Congress sent a forceful letter to President Joe Biden calling for “immediate humanitarian actions” to lift the economic sanctions “that prevent food, medicine, and other humanitarian assistance from reaching the Cuban people.” With Cuba struggling to emerge from a dire, Covid-generated economic crisis, the congressional representatives are pushing the White House to end the restrictions imposed by the Trump administration on remittances and travel and restore the Obama-era policy of engagement with the island nation. “Engagement,” the members concluded, “is more likely to enable the political, economic, and social openings that Cubans may desire, and to ease the hardships that Cubans face today.”1

Full engagement with Cuba, of course, would require lifting the US embargo—a demand the congressional letter conspicuously fails to make. As the embargo approaches its 60th anniversary, terminating it would require not only White House action but a vote in Congress that the Democratic leadership has neither the political capacity nor the moral courage to prioritize. Indeed, the humanitarian measures that these members of Congress are asking of President Biden are intended to soften an economic crisis that, for decades, the embargo has explicitly attempted to create.2

The Secrets of the So-Called “Havana Syndrome”

Imposed by the proclamation of John F. Kennedy on February 3, 1962, and codified into law during the Clinton administration, the “embargo on all trade with Cuba” has evolved through many manifestations of punitive economic sanctions and commercial restrictions over the past 60 years. “The embargo is outdated and should be lifted,” Barack Obama declared during his dramatic but short-lived effort to normalize US-Cuba relations. Instead, this “mold-encrusted relic” of the Cold War, as The Nation once described it, remains in place—the framework of a protracted, and failed, US endeavor to promote regime change, as well as an enduring symbol of the perpetual hostility of US policy toward the Cuban revolution.3

During the past six decades, The Nation has consistently opposed the US embargo against Cuba. The magazine has published editorial after editorial, story after story, with titles like “Endless Embargo,” “Tightening the Chokehold on Cuba,” “An Embargo That Serves No Purpose,” and “The Stupid Embargo.” The arguments for ending el bloqueo, as the Cubans refer to it, and adopting a sane, humanitarian, and normal US posture toward Cuba remain as relevant today as when they were published.4 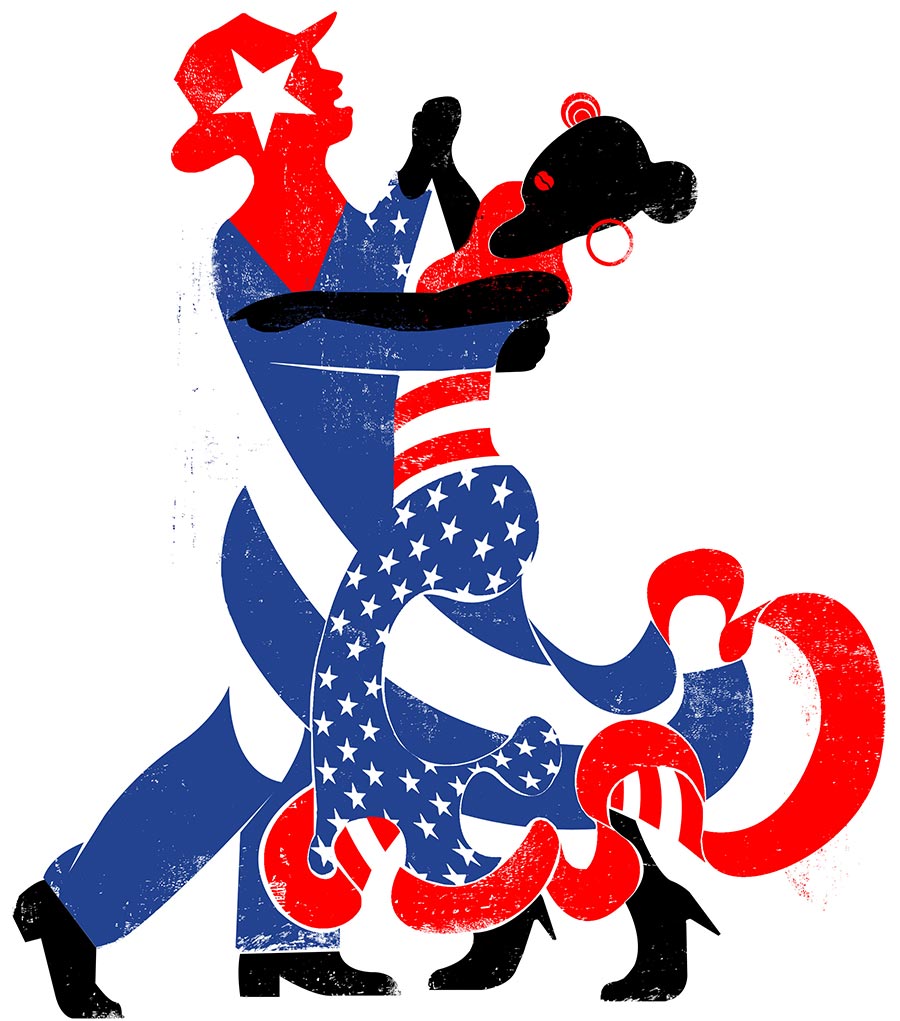 Cuba’s economy…depended on the United States for such essential items as trucks, buses, bulldozers, telephone and electrical equipment, industrial chemicals, medicine, raw cotton, detergents, lard, potatoes, poultry, butter, a large assortment of canned goods, and half of such staple items in the Cuban diet as rice and black beans…. A nation which had been an economic appendage of the United States was suddenly cut adrift; it was as if Florida had been isolated from the rest of the country, unable to sell oranges and cattle or to bring in tourists, gasoline, automobile parts, or Cape Canaveral rockets.5

We are antagonizing allies and enemies alike, and giving to others a market which geographically has been and should be ours. All this in the name of isolating Castro, but all we are doing is isolating ourselves.7

At the heart of the United States policy toward Cuba is the economic embargo. It was laid on to make things hard for the Cuban people in the expectation that they would recognize Fidel Castro as the man responsible for their hardship and throw the rascal out. The scheme has not worked; such schemes rarely do. Instead, the Cubans identified the cause of their troubles as the government of the United States. They rallied to Castro and he, for more than a decade, has used us as a whipping boy.9

For fifteen years we have tried to bring down the Cuban Government, by an airtight trade embargo, by diplomatic boycott, and even sordid efforts apparently organized by the CIA to assassinate Prime Minister Castro and other Cuban leaders. With both Mr. Nixon and Mr. Ford making highly publicized missions to Peking and Moscow…one wonders why we maintain our unyielding stand toward Cuba….11

From the vantage point of common sense, economics and diplomacy, we should be moving to normalize our relations with Cuba—not because we are looking for a love affair but because it is the only reasonable course for two neighboring nations….12 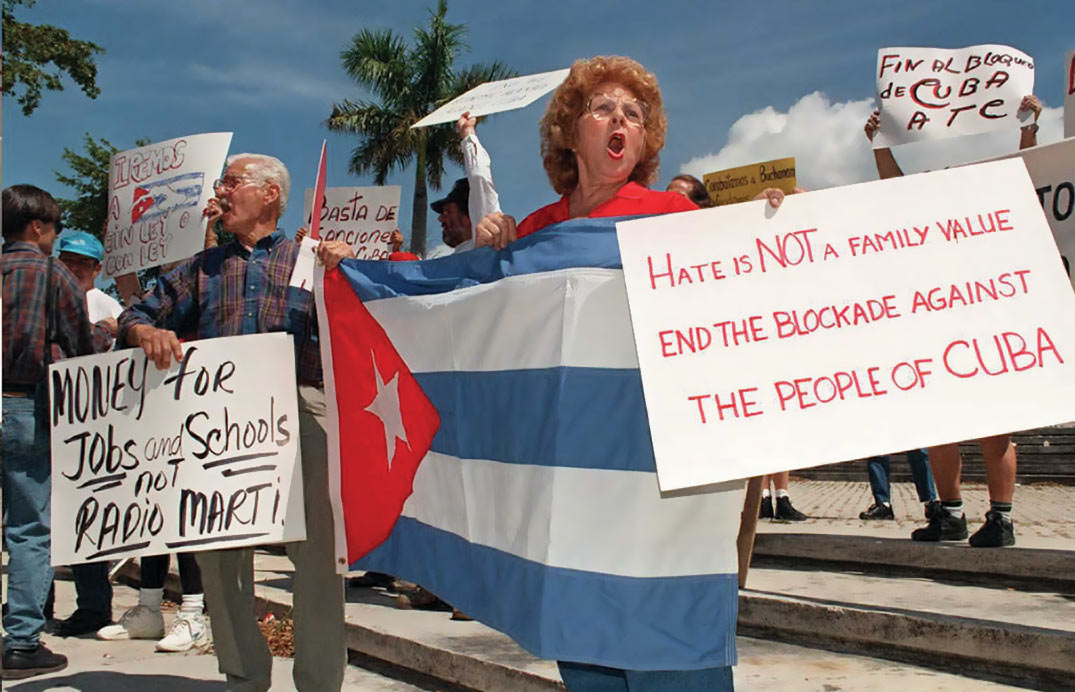 Take down this wall: Chang-Emelia Fernandez, a Cuban American, holds a Cuban flag as she protests against the 1996 Helms-Burton Act. (Rhona Wise / AFP via Getty Images)

Among its other efforts to dismantle the Cuban revolution, the United States has imposed one of the longest, most strictly enforced and extensive trade embargoes on record. That embargo, twenty years old this year, has produced endless bitterness but has failed to accomplish its original purpose: the economic isolation of Cuba…. Obviously the United States has everything to gain by lifting the trade ban and nothing perceptible to lose. The market is there, the currency is there, the desire is there. Ultimately, Washington will gain more influence not only in Cuba but throughout the hemisphere by re-establishing trade and diplomatic relations with the island than by perpetuating a retaliatory embargo that long ago lost its punch.14

Cuba’s Protests Are Different This Time

Under the fashionable label of “promoting democracy,” Representative Robert Torricelli is propelling a new “punish Cuba” bill through Congress…. Torricelli’s missionary passion is directed toward tightening the already strict U.S. embargo on Cuba, so as to, in his words, “shorten the suffering of the Cuban people by isolating Castro and forcing him out.” Despite recent polls showing that a significant sector of Cuban-Americans oppose tightening the embargo, Torricelli claims to speak for that community. This presumption has led to some dramatic exchanges with those Cuban-Americans who call his bill a “new Platt Amendment,” referring to the 1901 act that said the United States had the right to intervene at will in Cuban affairs.16 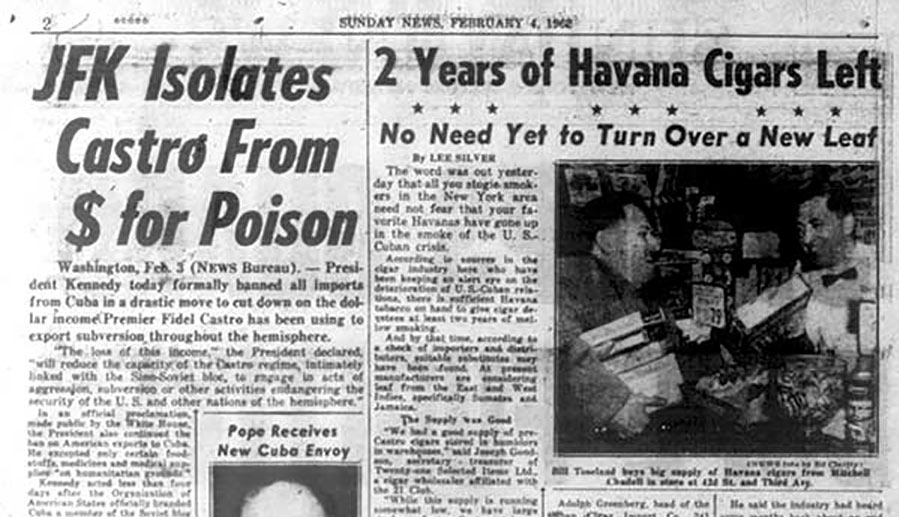 In a 1992 letter to the Bush Administration, protesting the tightening of the Cuba embargo, the U.S. Catholic Conference noted that embargoes “are acts of force…morally unacceptable, generally in violation of the principles of international law, and always contrary to the values of the Gospel.”18

The Cuba embargo is all of the above and worse. Put in place by President Kennedy’s executive order in 1962, it is a fossilized relic of an era that refuses to recede into cold war history. Since its inception, the trade embargo has become, as the Bay of Pigs invasion was once called, “a perfect failure” in all ethical, political and economic respects. It hurts the Cuban people but has failed to shake the government.19

Still, the “wreak havoc” crowd [in Congress], financed by Miami’s hard-line exile community, has managed to keep opposition to the embargo at bay. The logic of their position—to squeeze Cuba until it implodes into civil war—runs directly counter to U.S. national interests in the Caribbean. More than one major Pentagon study has pointed out that destabilization of Cuba will generate hundreds of thousands of refugees and extreme political pressure for U.S. military intervention—a prospect the Southern Command, and presumably the U.S. public, would rather avoid.20

The Administration frequently says that it wishes to see a “peaceful transitional process” in Cuba. And yet, if the objective is to get rid of Castro, then one cannot expect the process to be peaceful, for the hard fact is that Castro will not simply resign or fade away because the United States wants him to; rather if need be, he would fight, and many Cubans would fight with him. Thus, if one aims to remove the Castro government, then one must be ready for a bloody civil war—a war which would result in tens of thousands, perhaps hundreds of thousands, of Cuban refugees on our shores. Is that what the Administration wants?22

Since the end of the Cold War, the embargo has proved a serious embarrassment for Washington. Instituted as part of a broad set of punitive measures designed to isolate the Castro regime, the trade sanctions have succeeded only in isolating the United States. Every year for the past decade the United Nations has voted overwhelmingly to condemn the US blockade; the last vote, on November 27, was a 167-to-3 defeat for the United States, with only the Marshall Islands and Israel supporting Washington….24

What do you call a US policy that…detains and fines a class of New York high school students for taking a study trip over spring break? A policy that has been repudiated at the United Nations by virtually every other country in the world? A policy that, after forty-eight years of abject failure, is still based on the false assumption that success—in the form of “regime change”—is just around the corner? Imperial? Illogical? Irrational? Insane? As Wayne Smith, former chief of the US Interest Section in Havana, has observed, Cuba seems to have “the same effect on American administrations that the full moon has on werewolves.”26

Imagine a country developing and producing its own Covid-19 vaccines, enough to cover its entire population, but being unable to inoculate everyone because of a syringe shortage…. Because of the 60-year US embargo, which punishes civilians during a pandemic, the country is facing a shortage of millions of syringes.28

This reality is a consequence of what amounts to US economic warfare, which makes it extremely difficult for Cuba to acquire medicine, equipment, and supplies from vendors or transportation companies that do business in or with the United States. Syringes are in short supply internationally, so no company wants to be bogged down navigating the complicated banking and licensing demands the US government places on transactions with Cuba….29

If human rights are to be a core pillar of US policy, as a White House spokesperson recently declared, then the embargo must end. It is a policy that indiscriminately targets and harms civilians. It is a systematic violation of human rights on a massive scale.30