Optimism of the wall: Graffiti near the European Central Bank in Frankfurt, Germany, assures us that we will come together to build a new society. (Daniel Roland / AFP via Getty Images) 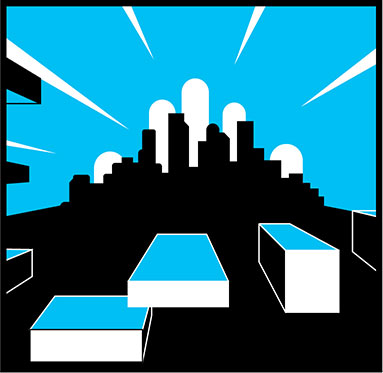 The virus made itself known in the Chinese city of Wuhan in December in the form of a respiratory illness not unlike pneumonia. At first, no one knew quite where the disease had come from, but it seemed to touch workers at a wet market where exotic live animals were sold. Before long, a 61-year-old man with preexisting health conditions died. He’d been a regular at the market, so they blamed the bats, then the pangolins, then the shoppers who procured these delicacies, and finally, just China. Within weeks, the region was on lockdown, and flights were canceled. But it was too late for containment. The virus had taken up residence in lungs and on fingertips, clothing and cardboard. Deterred only by soap and water, it traveled far and wide: to South Korea and Thailand, to Seattle and London.

One case was detected in the prophetically named French ski town of Contamines; a large outbreak occurred in Milan before spreading thick and fast throughout Italy. Hospital wards filled. People panic-shopped for hand sanitizer and, bafflingly, toilet paper. On January 30, the World Health Organization declared the virus a public health emergency; six weeks later, it deemed the crisis a full-blown pandemic.

As winter gave way to spring, the virus crept into schools, cafés, subway cars, and nursing homes. Universities closed dorms and moved to conduct classes online. Remote work protocols were adopted. Service work dried up, dealing cab drivers and waiters and aestheticians an economic blow. Children were told to stay home from school; parents were not told what to do with their children. But we are social creatures, unfit for long periods of solitude. When large gatherings were shut down, phone calls went unscreened and were even answered. People checked in. People cared.

As the plague spread, the human cost was staggering. Tens of thousands died. Millions more were sickened. It hit the elderly the hardest, as well as those with underlying conditions. The funeral industry boomed, as did the appeal of apocalyptic cults and slickly branded start-up religions. Fortunately, children were mostly spared, and communities came together to make sure they caught up on their schoolwork in the absence of classrooms, courses, and teachers.

Facing anger, outrage, and grief from their citizens, governments realized that those who could not do their jobs remotely—not to mention those whose work had dried up–would be destitute if they did not receive significant aid. So that’s what workers received: help, in the form of cash, food, and services. Means-testing went out the window. Work requirements were a joke. Debt payments and water bills and evictions were suspended, then canceled altogether. Central banks enacted radical measures to stimulate the economy. There were no interest rates left to cut, so lending turned into giving.

How Not to Waste a Crisis

We Can Afford to Beat This Crisis

The Mobilization That Must Start Now

No one asked where all the money was coming from, because everyone understood that this was where it had always come from. Some states actually ended up saving money: the happy result of all wars’ being put on hold thanks to a unanimous resolution in the UN Security Council. Iran reached a détente with Israel after medical researchers banded together to develop a treatment that saved the life of millions, including former prime minister Benjamin Netanyahu. The treatment prevented him from infecting his cellmates in his supermax prison; he ended up succumbing to a stroke. All but a tiny number of inmates in the United States were released. State funerals for politicians who said they could pray their way out of becoming sick were broadcast online, but attended by no one.

Military contractors started churning out medical supplies; soldiers mobilized to build homes and hospitals; unemployed workers pledged to build small-scale local green infrastructure. Austerity became a distant nightmare of the past. With the airline industry in shambles and industrial activity at a virtual standstill, carbon emissions dropped dramatically. Demand for oil dried up, too. Endangered species, unaffected by the virus, began to proliferate. Bats were studied and revered for their immunity to this virus, and many others. Pangolins were never seen at the dinner table again.

Because of stringent precautionary measures and warmer temperatures, the virus did not hit African states as hard as Western ones—a small mercy that nonetheless pushed countries there to establish a continental health system, with the help of the World Health Organization and an interest-free grant from the World Trade Organization, which changed its mission statement entirely. Instead of lending to economically ailing nations, it would pool funding and make debt-free development grants, reasoning it was the only way to avoid a market crash. Refugees living in camps—in South America, Lebanon, Greece, and beyond—were rehoused in decent accommodations to cut back on the risk of spreading the infection. They helped with relief efforts, earning them the admiration of locals and helping them integrate in their new homes.

Under the crushing weight of an overburdened health care system, countries began recognizing each others’ medical licenses, easing visa restrictions on doctors and nurses from less affected regions to emigrate and offering high-quality health care to everyone, no questions asked. People necessarily crossed fewer borders, but when they did, they were greeted with open arms. The TSA stopped banning liquids on flights, beginning with 12-ounce containers of hand sanitizer. Scientists worked around the clock to develop vaccines; philanthropists poured money into the initiative, even though they would no longer receive tax breaks for their efforts.

As their daily lives were upended, reorganized, and reimagined by the demands of the pandemic and the community, workers around the world adjusted to their new rhythms. In China, where the crisis began, months of lockdown gave way to blue skies and clean breezes. The smog had cleared—a result of massive factory shutdowns. The sun shone brighter. It was easier to breathe. Young peopled wondered, Why couldn’t the air be so clean every day? Why did they have to choose? Farmers even found their livestock thriving, and their crops growing better—a consequence of cleaner soil and water, as well as regulation by health authorities to prevent immunocompromization and animal-borne infections.

For office workers, as the months passed, they began to question the way they had been living before the virus. They missed human contact, but not their commutes. They wanted to see their colleagues, though were relieved to shed the artifice of the nine-to-five, the endless meetings, the pretending to be busy at all hours of the day, the sad desk lunches and minute-counting. They worked when they needed to, and stopped when it was over. They spent more time with their families and made bad music and bad art.

So many conventions had revealed themselves to have been hollow in the face of a crisis. Going back to the old ways felt inconceivable.

And so slowly but surely, all around the world, the question stopped being “Why us?” or “Why now?” It became “Why not?”

A previous version of this article misstated the date when the WHO declared the novel coronavirus a public health emergency.