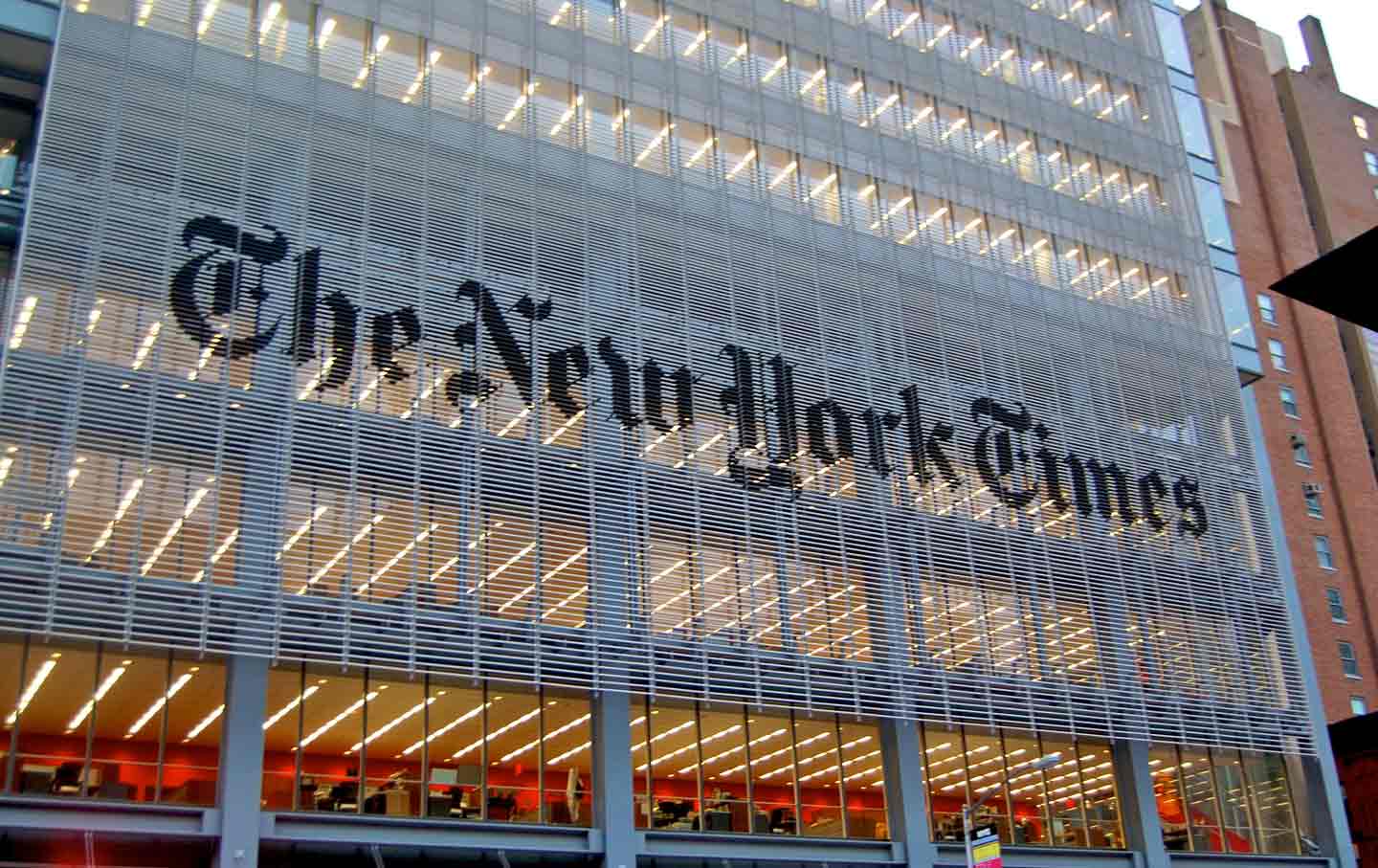 The Trump administration and its Republican enablers are fighting a series of wars directed at targets inside the United States. A partial list would include immigrants, African Americans, Jews, poor people, middle-class people, people with student loan debts, the environment, voting rights, fair elections, blue-state taxpayers, the rule of law, honest elections, and all forms of accountability for Donald Trump, his family, and the criminals who helped him get elected. Because these are by and large unpopular causes, and it is the job of the press to let the public know what is going on, journalists are also a necessary, if ancillary, target. That explains Trump’s frequent use of the phrase “enemies of the people,” which had been the go-to charge of dictators and mass murderers, as well as his incessantly parroted mantra “fake news.”

Those running the country’s elite media institutions have no experience with a situation like this and still cannot figure out how to handle it. Historically, media machers have seen themselves as collaborators with government officials to ensure that things run smoothly for whoever is in power. They do this, in part, because they believe in the cause and, in part, to obtain access, quotes, and the public pretense of respect. When James Reston, who was then The New York Times’ most influential columnist, published an op-ed in 1979 titled “By Henry Kissinger With James Reston,” he did so not with shame but pride.

Reston was flacking for a man who directed a secret, unconstitutional war in Cambodia and Laos and illegally wiretapped journalists and the members of his own staff to determine who leaked the news to Reston’s paper. US government officials, especially but not exclusively Republicans, have been lying to the American people about matters of life and death for a long time. The mainstream media eventually righted itself under President Richard Nixon’s assault on our democratic institutions, but its ability to do so today under Trump, an even greater threat to American democracy, is considerably diminished. The reasons for this are complex. Some are economic, others technological. But during the present crisis, the biggest problem is that the leaders of the mainstream media cannot make up their minds about the fundamental question of the Trump presidency: “Which side are you on?”

The top editors of almost all of America’s mainstream media institutions have explicitly rejected the notion of a journalism of opposition. While The New York Times and The Washington Post, for instance, have tallied Trump’s untruths—separate from the articles in which they are repeated verbatim—neither has proved willing to reconsider its commitment to the mindless both-sides style of reporting in which Republican lies and incitements to fascist violence are given equal weight to Democratic attempts to tell the truth and defend democracy.

Thanks to Trump’s response to the protests against police brutality, however, the jig is up. Military leaders past and present and even a few Republicans have had enough. It is not OK for Trump to demand a military attack on our own citizens and then lie about having done so. And yet at this moment, New York Times opinion editors offered American journalism’s most prestigious real estate to Senator Tom Cotton to make the case for Trump’s proposed assault.

The best case that could be made for the Cotton op-ed was its obvious crappiness. The piece was nothing but lies, half-truths, character assassination, and scare tactics. Anyone reading with a critical eye would have recognized his argument’s weakness and dismissed it as deranged fascist propaganda. Had the Times defended its decision to publish the piece by explaining it was purely to expose the shoddiness of the Trump team’s argument, it would have been a defensible position based on a degree of respect for the intelligence of its readership. This is presumably the reason Russian President Vladimir Putin and Taliban deputy Sirajuddin Haqqani have appeared on the op-ed page as well.

But that is not what happened. The paper’s editorial page editor, James Bennet, followed by its publisher, A.G. Sulzberger, initially justified the piece in terms of the op-ed page’s traditional (and laudable) commitment to diversity of opinion. They acknowledged the piece’s weaknesses only after an unprecedented online rebellion by the paper’s reporters and contributors, led by African American staffers who felt that its publication put their lives in danger. Bennet resigned after admitting that he had not read the piece in advance, and the deputy in charge, James Dao, was reassigned. Given the regular appearances on the page of former Wall Street Journal opinion editors Bret Stephens and Bari Weiss, it’s no wonder that the 25-year-old Adam Rubenstein—also an alumnus of the Journal (and The Weekly Standard)—who edited and shepherded the piece onto the Times’ website despite objections from a photo editor, did not recognize its awfulness or dangerousness. But therein lies the problem. The paper cannot decide which side it’s on.

We know which side Cotton’s on. In addition to calling on Twitter for the military to attack protesters with “no quarter”—that is, committing the war crime of massacring captured troops even if they surrender—he also once urged the Department of Justice to “prosecute [reporters and an editor at the Times] to the fullest extent of the law” for an article revealing a US intelligence program to track the financial activities of suspected terrorist networks. He was for many years a protégé of Weekly Standard founder William Kristol, who, in his previous, pre-woke incarnation, similarly opined, “I think it is an open question whether the Times itself should be prosecuted” for what he termed a “totally gratuitous revealing of an ongoing secret classified program that is part of the war on terror.” Kristol was rewarded for this with a regular spot on the op-ed page.

I don’t doubt the Times editors’ good faith in seeking to expose readers to points of view they might not otherwise encounter. But more than three years into the Trump presidency, given the threats we face, it is long past time for editors to stop playing both sides with fascism and democracy.