New York, N.Y.—October 26, 2020—The Nation, America’s leading source of progressive politics and culture, today announced the launch of System Check, a new 10-episode podcast uncovering the harmful systems operating under the hood of US democracy. Bridging from Election Day to Inauguration Day, cohosts Melissa Harris-Perry (@MHarrisPerry) and Dorian Warren (@dorianwarren) will bring common sense to political commentary, turn down the frenzy and tune into the leaders and change makers doing the work of fighting for a more radical, just, and equitable future. They will make sense of the systems undergirding and undermining our democratic institutions—and identify their promise and potential for political change. Listen to the trailer here.

Colleagues, coworkers, and co-conspirators, Melissa and Dorian bring out the best in one another as smart, funny, irreverent, skeptical, insightful friends with a lot to say about our social and political world. They bring two decades of collaboration, astute political analysis, activist/organizer energy, and academic rigor to create an informative, solutions-oriented, not-to-be-missed new program. (Read Melissa and Dorian, in their own words, in a just-published Q&A for The Nation: “Checking the Systems That Hold Us Back.”) 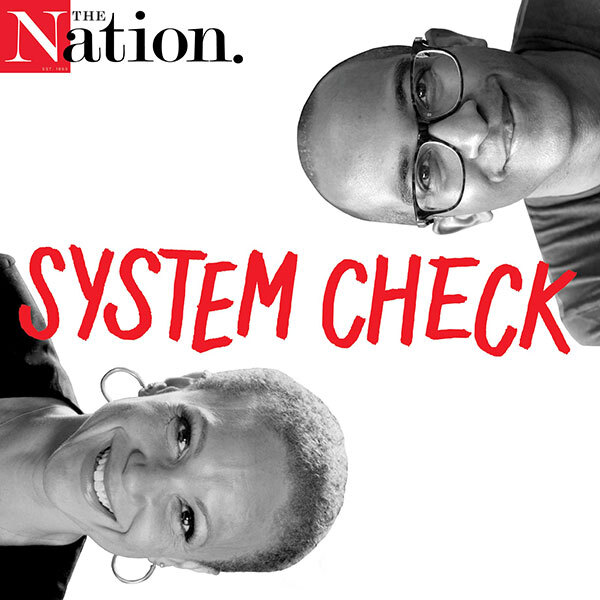 Subscribe to ‘System Check’ wherever you get your podcasts.

“As a longtime admirer of Melissa Harris-Perry, I’m delighted she’s come back home to the Nation. And equally delighted that Dorian Warren, whose brilliance has illuminated many Nation editorial board meetings, has decided to stop hiding his light under that bushel,” said Nation editor D.D. Guttenplan. “Together they bring formidable political wisdom, cultural savvy, and incredible energy to a conversation that no one who cares about building a better world will want to miss.”

“The systems that shape our lives aren’t working for the vast majority of people in this country—Melissa and Dorian know this; it’s something they’ve grappled with for years, and it’s something they’re committed to changing,” added multimedia editor and System Check executive producer Frank Reynolds. “That’s what this show is all about: imagining the future we want to live in, and working like hell in the present to make it happen. I am so grateful that we’ll have Melissa and Dorian as our guides through this necessary, transformative work. I’m also thrilled to be working again with Sophia Steinert-Evoy, our producer and my former colleague on The Nation’s Next Left podcast. This team is going to make the time between the election and the inauguration one of listening, learning, planning, and fighting for the future we deserve.”

“I have assiduously avoided all broadcast media for nearly four years, but I just couldn’t pass up an opportunity to come home to The Nation,” said cohost Melissa Harris-Perry. “The Nation is the first place I penned a column. The Nation has supported my work with student journalists. The Nation has developed and amplified many of the thinkers and writers I rely on to understand the world. I am thrilled that Dorian and I have this opportunity to add our voices to their meaningful work. I learn something new every single time I talk with Dorian. Partnering with him to host this podcast is just an excuse for me to have more opportunities to enjoy his humor and intellect.”

“For 20 years, Melissa has been like the sister I never had, but always wish I did,” added cohost Dorian Warren. “Between her sheer brilliance, her deep skepticism of what passes for conventional political wisdom, her groundedness in the everyday struggles of marginalized folk, and her rib-tickling sense of humor, it’s like taking a ‘smart pill’ every time I talk to her. Partnering with her on this podcast is a joy to make meaning together of our chaotic world and cut through the daily noise. And, yes, smart hilarity will ensue.”

At root, System Check recognizes that the systems that oppress people in this country are not really broken or malfunctioning; in many cases, they are operating just the way they were intended, to disenfranchise and suppress the many and consolidate power among the few. The show looks at how these systems work, who they were designed by, and why we must understand the origins of those systems in order to shift and remake those systems. It rejects the notion that this moment is unprecedented—instead bringing history, context, and nuance to bear on the challenges we face today.

The first episode of System Check launches this Friday, October 30, with a look at the system of casting a vote; part two of our voting-system check will look at the system by which that vote is counted. With new episodes each Friday thereafter, future shows will tackle systems of poverty, of immigration, of climate change, and of white supremacy. From a temperature check on the global pandemic, to the reign of austerity politics in a deepening economic depression, to the outsized monopoly power of tech giants like Amazon and Facebook, and from cancel culture to the misremembrance of Martin Luther King Jr., Melissa and Dorian will take on an encyclopedic range of crises and quandaries with steely-eyed hope and humor.

System Check is the latest addition to The Nation’s growing catalogue of politically charged podcasts and limited-term explanatory series exploring the most crucial issues facing America today. Our previous successful forays into podcasting include The Nation’s flagship weekly news program, Start Making Sense, with host and contributing editor Jon Wiener, and Edge of Sports, where sports and politics collide, hosted by sports editor Dave Zirin. The Nation has also produced several smart, limited-run podcasts, including, in partnership with WNYC Studios, the inaugural seasons of United States of Anxiety and There Goes the Neighborhood, with host Kai Wright; Next Left, where politics gets personal, with the next generation of progressive politicians, activists, and change makers talking to national-affairs correspondent John Nichols; and More Than Enough, a frank discussion about Universal Basic Income and the ways in which people’s lives—and our country and politics—would be transformed if people had their needs adequately covered, with host Mia Birdsong. Together, these Nation podcasts offer a distinctive understanding of news and politics and people with a focus on “bottom-up” storytelling, and an eye to the stories you won’t hear anywhere else.

ABOUT: Co-Host Melissa Harris-Perry is the Maya Angelou Presidential Chair and Professor in the Department of Politics and International Affairs and the Department of Women, Gender, and Sexuality Studies at Wake Forest University. She is founder and president of the Anna Julia Cooper Center and a long time columnist and contributor to The Nation. From 2012–16 she hosted the television show Melissa Harris-Perry on weekend mornings on MSNBC and was awarded the Hillman Prize for broadcast journalism. She’s penned regular columns for Essence and The Nation and served editor-at-large for Elle.com and ZORA, a Medium publication for women of color. Follow her on Twitter: @MHarrisPerry, and on Instagram: @mharrisperry.

Co-Host Dorian Warren is the president of Community Change, and co-chair of the Economic Security Project. A progressive scholar, organizer, and media personality, Dorian has worked to advance racial, economic, and social justice for over two decades. He taught for over a decade at the University of Chicago and Columbia University, where he was codirector of the Columbia University Program on Labor Law and Policy. He also worked at MSNBC, where he was a contributor and host, as well as the executive producer of Nerding Out on MSNBC’s digital platform. He serves on the editorial board of The Nation magazine. As a commentator on public affairs, Warren has appeared regularly on television and radio including NBC Nightly News, ABC, MSNBC, CNN, CNBC, BET, BBC, NPR, Bloomberg, & NY1, among other outlets. He has also written for The Nation, HuffPost, Newsweek, Salon, The Washington Post, The New York Times, Medium, Ebony.com, and Boston Review. Follow him on Twitter: @dorianwarren, and on Instagram: @doriantwarren.

Producer Sophia Steinert-Evoy is an audio producer and editor. She produced Next Left from The Nation with John Nichols. She has also worked on the podcasts Citations Needed, Hi-Phi Nation, and The Organist, as well as audio documentaries for BBC Radio 4. Follow her on Twitter: @steinertevoy.

Executive Producer Frank Reynolds is The Nation’s multimedia editor and the executive producer of the podcasts Next Left, More Than Enough, Start Making Sense, and Edge of Sports.

Founded by abolitionists in 1865, The Nation has chronicled the breadth and depth of political and cultural life, from the debut of the telegraph to the rise of Twitter, serving as a critical, independent, and progressive voice in American journalism.