At the beginning of August last year, the Boston Police Department rolled out Operation Clean Sweep, several nights of terror for the city’s drug-using homeless community dwelling on the streets where Boston’s South End and Roxbury neighborhoods meet, near the Boston Medical Center and many of the city’s largest substance use and homeless service providers. Operation Clean Sweep lingered for weeks, with increased police presence and constant harassment of people in the area who use drugs or were suspected of doing so. In one incident last summer, according to his health care provider, a patient who’d been admitted to the hospital was arrested by police when he stepped outside for a cigarette, and though he was released from custody later that day, had his care interrupted thanks to the caprices of the Boston Police Department.

While Boston Mayor Marty Walsh defended the arrests of dozens of people and the destruction of their personal property—including several wheelchairs belonging to homeless residents—many involved with public health criticized the raids. Even Boston District Attorney Rachael Rollins spoke out: “Public safety begins with public health. As I’ve long made clear, we cannot arrest our way out of a health and resource crisis. People who suffer from homelessness, substance use disorder, or mental illness are not debris; they cannot be ‘swept’ away.”

During the Covid-19 pandemic, these same people have been the forgotten, an inconvenient afterthought, even though we know that addressing the spread of the virus means making sure everyone is protected and taken care of—no matter who they are. Leaving people living with substance use or mental health disorders out on the streets, homeless, without proper shelter and supportive care is a recipe for disaster. Especially since during the pandemic, services that require face-to-face contact have been restricted to limit transmission.

While health care workers have been stretched thin in responding to Covid-19, many traditional shelters have closed temporarily or significantly reduced their capacity lest they become hot spots for SARS-COV-2. Suggestions from health care workers on how to deal with the colliding crises of Covid-19, homelessness, substance addiction, and mental illness start with housing: repurposing hotel rooms and university dorms for single occupancy for the unhoused, linked to the social services people need. Many of these proposals come from those working right in the center of the storm where Operation Clean Sweep took place.

Travel Bans and Boosters Alone Won’t Protect Us From Covid

Covid Year 2: About Suffering the Old Masters Were Never Wrong

But the current situation in Boston for people experiencing homelessness, substance addiction, and mental illness “is a shit show,” in the words of one observer I spoke to, while another called it “dystopian and scary.” The environment there is so volatile that a repeat performance of Operation Clean Sweep could come at any time. I’ve spoken to several people this week about what is happening on the ground. All were fearful of reprisals by the City of Boston, and thus all asked to remain anonymous. The threat of reprisals is real: After one complaint against a Boston Police Department officer, certain shifts in the area were boycotted, so service providers and health care workers had to walk from their offices to their cars without any police presence at all.

Boston has taken a worst-of-both-worlds approach to drug users who are experiencing homelessness. In a more conservative American city, they would be arrested, jailed, and hounded from all public spaces; in a more liberal one, there might be a more laissez-faire approach to these individuals, with more people visible on the streets across the city—often without enough services to meet their needs. Think San Francisco. But what Mayor Marty Walsh and his police department have done is to corral drug-using homeless people into small tracts of industrial no-man’s lands between the gentrified South End and Roxbury, the heart of the city’s African American community. One observer told me it was if the city had decided to “concentrate all its social despair into a couple of blocks” of real estate to keep it hidden from view.

As of last week, in the parking lot at Massachusetts Avenue and Melnea Cass Boulevard, originally set up as a pandemic-time comfort station—with the Boston Health Commission just trying to provide shade, bathrooms, and handwashing sinks wherever the police are pushing people—the men and women are fenced in, with gardening cloth along the fence obscuring what is going on inside, and with only one way in and one way out. As in the “Hamsterdam” episode of David Simon’s The Wire, the parking lot has become a place where people go to do their business: buying, selling and using drugs. It’s largely a self-regulated space with people who use drugs themselves giving naloxone to those who overdose and with services nearby for any serious complications that happen inside. The police recently installed surveillance cameras—whether for the ostensible purpose of monitoring the site for safety or for building cases for arrest and prosecution later—and the lot emptied out for a while. Business is now back to usual, but a single incident of violence in the crowded space could set off a spark, with the police sweeping in like they did last summer. If that happens, those who most need help could end up going to jail (where Covid-19 infection risks remain extremely high), or going underground, dispersing across the Boston area, where their friends can’t help them, and where they won’t get tested for Covid-19—though they are the population most at risk of acquiring the infection.

Boston is the capital of one of our most progressive states, with a medical community that is second to none in the country. Now it needs a mayor and police commissioner who will do the right thing on substance use and homelessness. There are examples of cities whose approach Boston could replicate; Trieste, in Italy, and the Finnish capital, Helsinki, both have innovative approaches to homelessness and drug use. But adopting them would require building or converting more housing for those who are now homeless or in danger of becoming so, and hiring more social support workers rather than police to support those with substance use or mental health problems.

In the long run, though, such a strategy could also save money. Some studies suggest that every homeless person in properly supported housing reduces the need for spending on emergency health care, social services, and the criminal justice system by over $15,000. With discussion now raging all over the country about how to repurpose municipal budgets and shift money away from police departments, Boston could make a difference in the lives of its most vulnerable citizens by putting its money to a better purpose. Mayor Walsh has already announced that he’s shifting 20 percent of the police overtime budget, about $12 million, to social services in the city. As DA Rachael Rollins has said, “Investing resources in evidence-based solutions isn’t just the right thing to do; it’s the smart thing to do. Clearing the streets will not clear up the underlying problems, and in the end will cost us more money and more lives.”

Covid-19 has exposed the weaknesses in American society. The pandemic has also shown us that we’re only as safe as the most vulnerable among us. Not caring before Covid-19 was a moral failing—or a political one. But unless we address the conditions of people who use drugs, people who are homeless, we’ll never rid ourselves of the coronavirus. Boston could lead the way—not by its current policy of giving these individuals no safe quarter, by jamming people into close proximity in squalid conditions, but by rising to the occasion to try something new, at least for the United States. Massachusetts did this once before, with Romneycare, which became a template for the Affordable Care Act. A repeat of Operation Clean Sweep this summer in Boston would be a catastrophe for those now seeking refuge in the only place where the city will let them exist. It would also be an indictment of all of us—and would come at our collective peril. 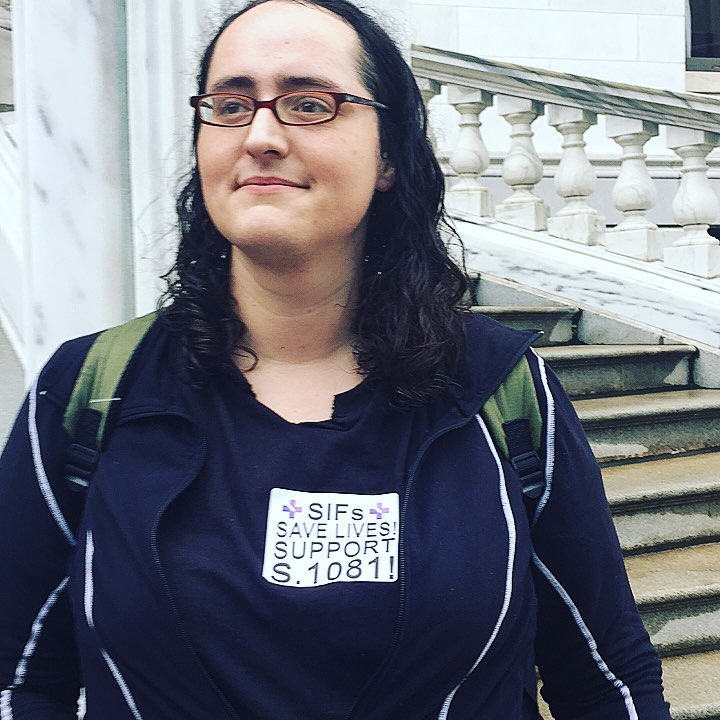 Just last week, Aubri Esters, one the city’s leading advocates for harm reduction and overdose prevention efforts, who championed the rights of people struggling with substance use disorders, died at the age of 35 in her apartment. She worked tirelessly for the dignity and rights of people who used drugs. I tried to reach her for this story before the news of her death was released. Many in Boston, including the mayor, are now eulogizing her and praising her work, but as one doctor who knew her said, “I can hear Aubri saying, ‘Nice words, Mayor. Now use your power and privilege to make Safe Consumption Spaces a reality, though maybe not so politely.’” We’ve all got to stop being so polite when it comes to the rights of people who use drugs, people experiencing homelessness, and people living with mental illness. Right now, during this pandemic—and long after it’s over.