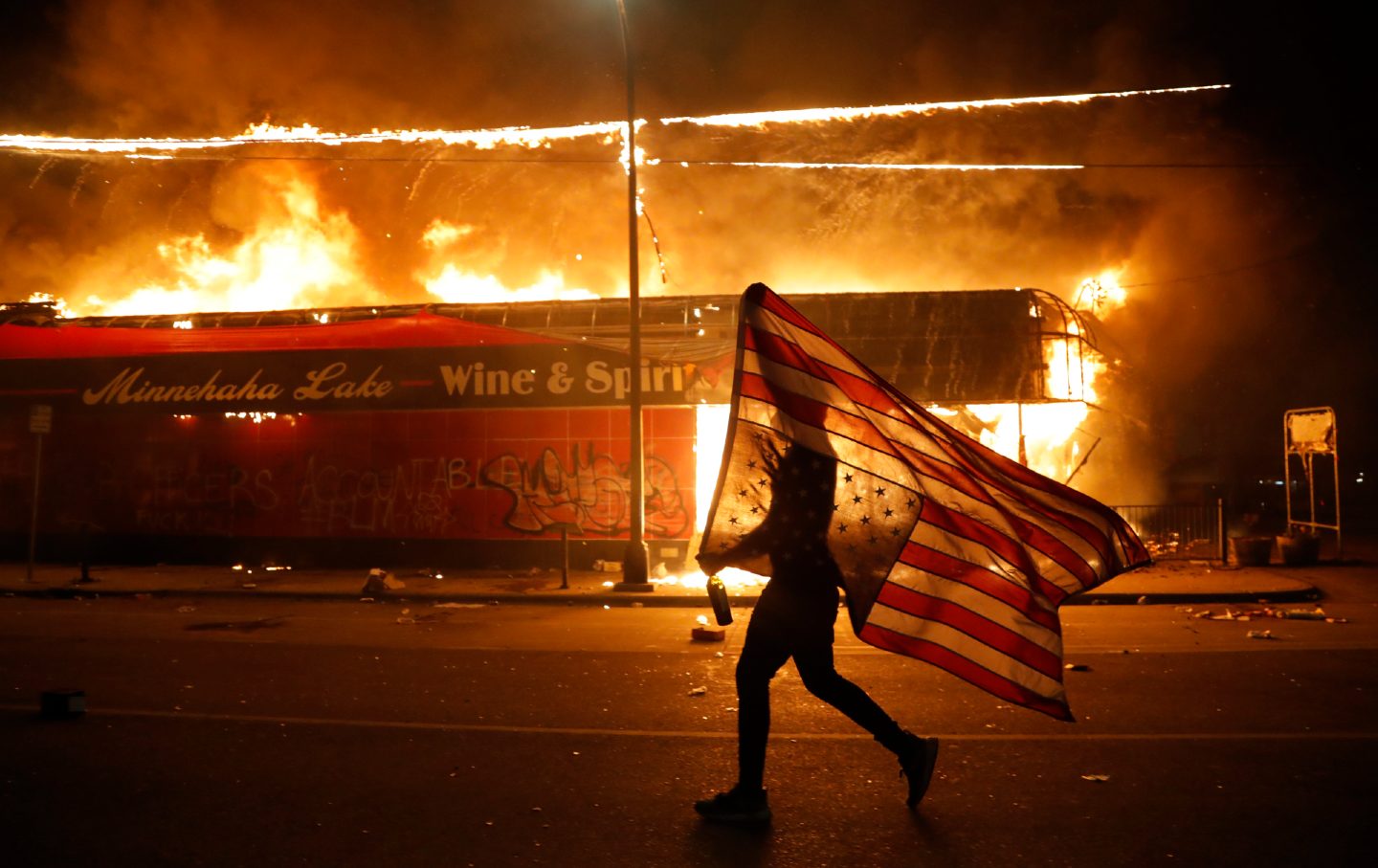 A protester carries a U.S. flag upside down, a sign of distress, next to a burning building on Thursday, May 28, 2020, in Minneapolis. (AP Photo/Julio Cortez)

I know I am supposed to counsel nonviolence. I’m a 42-year-old man with a wife, two kids, and a mortgage; I’ve got a college degree and a law degree and a blue check mark on Twitter; I know I am supposed to shun “rioters” and “looters” who allegedly cede the moral high ground of protests when they respond to tear gas and rubber bullets with stone and flame. But all people have a limit to the injustice they can bear before lashing out.

The second day of protests in Minneapolis over the death of George Floyd erupted into violence last night. I understand why. And I’m surprised it doesn’t happen more often.

Put yourself in the position of a relatively conscious black person in America just since this past March. Black people have seen a pandemic disproportionately rip through their communities while the media continually runs live press conferences of a racist president lying about the disease. We’ve seen layoffs and unemployment ravage our communities while Congress funnels billions of dollars to white-owned businesses. We’ve seen white people absolutely lose their minds, waving guns and Confederate flags at police officers, pushing them into lakes and gathering in large groups without consequence while we’ve seen police literally sit on black people for allegedly violating social distancing orders.

And then the stories of the killings started. In the past three weeks: Ahmaud Arbery was lynched, on video. Breonna Taylor was killed by police in her own bed, offscreen. And George Floyd was choked out on the street in broad daylight by police while strangers literally begged for his life.

Imagine you’ve been black this whole time and watched all of this happen and you show up to protest and, instead of being met with docile, restrained police that the white Confederates get, you are confronted by police in full riot gear who use tear gas and rubber bullets to control your crowd.

The fact that most black people do not pick up the rock in that situation is a miracle. The fact that the overwhelming majority of black people respond to the violence and terrorism practiced against us with words and songs instead of rocks and bricks is altogether supernatural. America should be thankful black and brown people respond to state-sponsored violence with nonviolence. In other times, in other places, the injustice regularly practiced by the white American paramilitary forces known as the local police would be met with rebellion or revolution. Here, black people take to the streets, and almost all of us do so nonviolently. America is the luckiest place on earth.

People need to understand and remember that nonviolence is a choice. I’m Haitian by ancestry. That’s relevant because, as any person of Haitian ancestry will happily tell you, Haiti had the only successful slave revolt in the Western Hemisphere, and freedom wasn’t achieved nonviolently. I think my heritage makes me acutely aware that nonviolence is but one option among many. Everybody talks like T’Challa when white people are listening, but Killmonger was right, at least partially. There are multiple ways to be a Black Panther.

It takes incredible strength to practice nonviolence in the face of murder and oppression. It takes incredible, nearly irrational faith that the long arc of history will bend toward the cause of justice. I’m not Jesus, and I’m not Martin Luther King Jr.; turning the other cheek does not come naturally to me. It doesn’t even seem logical most of the time.

Until you’ve participated in a primarily black protest, you don’t really know how naked, how exposed, nonviolence feels. Until you’ve heard the rumor ripple through the crowd that the cops are planning to open fire, you haven’t really thought about what nonviolence means. You don’t know how foolish it feels to be out there, unarmed, protesting police who you know are authorized to kill you.

The only one of those protests I’ve been to was after the murder of Sean Bell in New York City. And the protests around his murder didn’t even get that hot. But I learned then that street-level activism was not going to be my thing. Being an effective black protester against white violence takes restraint. That’s actually the most important skill. It would be a lot easier to show up, take a bucket of rocks, and throw them at enemies. Anybody can do that. It’s natural to do that. But going out there knowing that violence can be done upon you while you are defenseless takes a kind of courage I do not have.

On top of all that, nonviolent black protesters know for an absolute fact that their strength and courage will be ignored by the white media, the very people whose attention they are trying to get, if even one knucklehead does something “violent.” I am clever with words. I can make a bomb-ass placard. But I also know that I could stand outside for hours dropping verses like Lin-Manuel Hamilton and the camera would ignore me if two brothers jacked a television from Target. The camera likes fire. It likes blood. It is attracted to the violence. Sometimes people throw rocks because throwing rocks feels like the only thing white people even notice.

We Didn’t Need Video to Know Ahmaud Arbery Was Lynched

The press incentivizes violence, the rage inspires violence, and the instinct toward self-preservation makes violence seem smart and justified.

So I choose to praise those who protest nonviolently, instead of decrying those who do not. The restraint shown by black people all across this country is admirable. We are being terrorized. We are being traumatized. We are being hunted by cops who can kill us out in the open, and when we gather to complain, those cops use violent tactics to scare us and hurt us and disperse us. And still, almost all of us use our words instead of our fists.

America should be more thankful for that. And it should remember that it’s a choice.

What We Still Haven’t Learned From the Trump Era