Donald Thompson is a social justice photographer who lives and works in Tulsa, Okla., and has deep roots in the city’s Greenwood District. Once a thriving and prosperous Black community, Greenwood was largely destroyed in 1921 by a mob of armed white citizens in what has come to be known as the Tulsa Race Massacre. During the 1960s and ’70s, Thompson photographed what he terms the “second massacre of Greenwood,” when the city of Tulsa used eminent domain to bulldoze most of what remained of Greenwood’s business district. On the 101st anniversary of the 1921 Tulsa Race Massacre, I interviewed Thompson about his more than five-decades-long quest to capture and preserve his beloved community in photos.

arlos I would like to start by asking you to talk about your relationship with Tulsa.

onald hompson: My dad was from Alabama, and my mother was from Louisiana, but they moved to Oklahoma with their parents back in the early 1900s, which is where they met. They left Oklahoma during the Depression and traveled to California as part of the Great Migration. That’s where I was born. After more than 25 years there, they decided it would be better for us to come back to Oklahoma and start all over. So that’s how I ended up here. I had experienced a little bit of racism and bigotry in California, but nothing like I confronted here in Tulsa. It was so thick, so prevalent—truly intolerable. I was shocked and dismayed, to the point that I wanted to go right back to California. I couldn’t understand why people put up with it.

That’s essentially the reason why I became a social documentary photographer. I wanted to show others what I was experiencing and what I was seeing with my own eyes. I wanted to highlight the disenfranchisement that I was seeing in my community—the unrepresented and marginalized people, the oppressive social, political, and economic injustice that they were being subjected to. I wanted to provide an eyewitness account of what was going on. It was, to me, a horrific situation. But I think that as I became more involved with Oklahoma and Tulsa, I began to realize why it was that people put up with it. They were actually afraid to speak up, because of what their parents and grandparents had gone through in 1921. It was a brutal and traumatic experience. 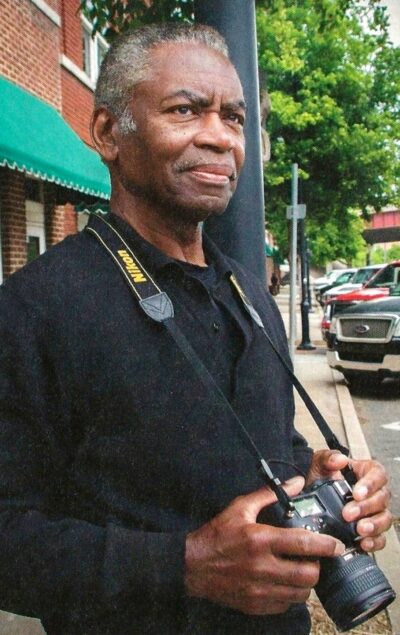 Unfortunately, there are no known photographs of Greenwood’s businesses before the 1921 race massacre. Several photographers had shops there at the time, but they were destroyed by the invading mob. Reverend Hooker, for example, had a photography business on Greenwood Avenue. His shop was burned to the ground, and I imagine that his negatives or plates and his other equipment were all lost in the fire. That is surely the main reason why we don’t have a record of pre-1921 Greenwood that shows the homes and businesses and people that were there.

KKH: How did you become involved with photography, and when did you specifically begin photographing Greenwood?

DT: My interest in photography began in the 1960s, when I was in the Army. I was forced into it, in a sense. I was stationed in Würzburg, Germany, serving as an information specialist and writing stories for the military newspaper Stars and Stripes. One day the commanding officer called me into his office and told me that General [Earle] Wheeler, the army chief of staff, was coming to our unit. “We need photographs,” he said. I said, “Well, what do you want me to do? I don’t even have a camera.” He said, “Go into Würzburg and buy one, because we do need photographs, and we don’t have a photography station here in our unit.” So I went into Würzburg and got a little Yashica twin-lens camera. I spent half the night trying to understand how to operate it. I had been given an important assignment, and I didn’t want to mess it up.

So I loaded the camera, hoping that I had done it correctly, and I went out that next day and started photographing the general. I took 12 photographs of him and then had the film developed, and only one image out of those 12 came out correctly. The rest were no good—out of focus, terrible exposure. But lo and behold, the one photograph that came out showed him clearly and smiling. I showed it to my commanding officer, Colonel Tichnor, and he said, “This will do. This is great.” So that was my initiation into photography. After I was discharged and came back home, I bought a small 35 mm camera and started taking photographs of my family members and so forth, trying to get familiar with it and learn how to operate it correctly. And also trying to learn the trade. Here I was, a 21-year-old kid who had never had a camera in his life, and I just happened to be given this assignment to carry out.

DT: When I came to Tulsa and saw what was happening, my first inclination was to get the camera and use it as a way of showing some of the things I was experiencing. Gordon Parks referred to his camera as his weapon of choice: He could either pick up a gun or pick up a camera, so he chose to take up a camera and use that to show the social, economic, and political injustice that he was encountering. I was doing the same thing, trying to show what I was witnessing. I felt that using a camera to document an injustice could serve as a powerful catalyst for social transformation in the world. If I could use photography to transform somebody’s preconceived ideas and bring some degree of empathy to the struggles that we were facing, if I could use it to help tackle oppression and poverty—that was my main goal. I just wanted to dispel some of the preconceptions about our people. 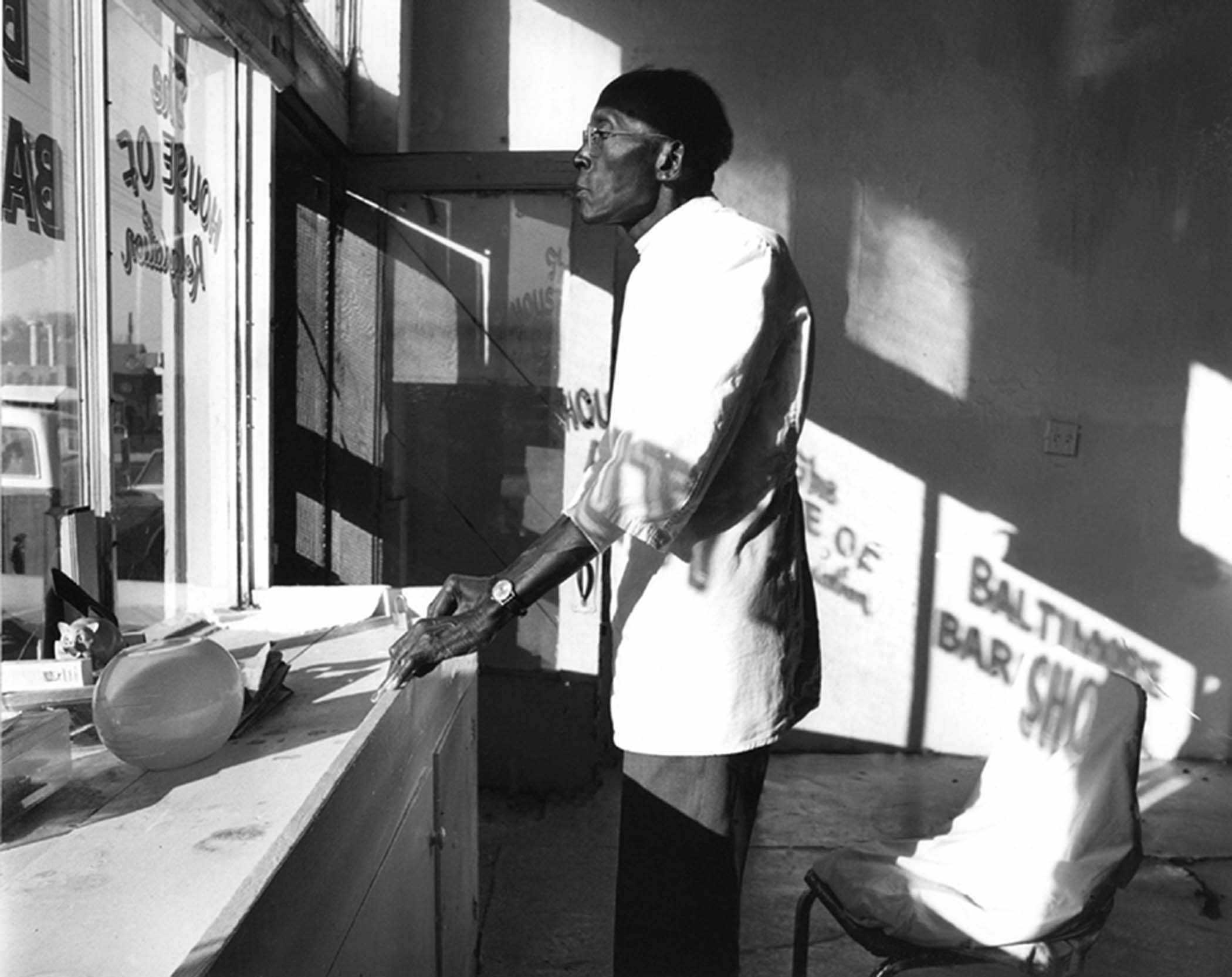 Donald Thompson shot this image of the Baltimore Barbershop in Tulsa’s Greenwood District in 1970 just days before the city used eminent domain to tear it down. (Donald Thompson)

KKH: What were some of the first images that you captured in Greenwood?

DT: As you well know, by the ’60s and ’70s the Greenwood area had been declared a ghetto. That gave the city of Tulsa some sort of authorization to undertake urban renewal and assert eminent domain. In my opinion, they wanted to destroy Greenwood, and through the use of eminent domain and urban renewal, they did a pretty good job of it. I wanted to use my camera to document the buildings and businesses in that area, and the men and women who occupied them before the bulldozers knocked everything down.

My first photograph that got some recognition was of the Greenwood Shine Parlor on the corner of Greenwood Avenue and Archer Street. The owner, Mr. Smith, told me that his little shoeshine business wouldn’t be around much longer, because the city was determined to eliminate it, so I wanted to get some photographs while it was still there. After that, I went up and down Greenwood, photographing as much as I possibly could before it disappeared. I could only come into Greenwood during the day, because I was working the night shift at McDonnell-Douglas to support my wife and two children. I would get there early in the mornings and photograph as fast as I could, but to my lasting regret, I was not fast enough to document all the buildings that were literally being destroyed right in front of me. And it seemed as if they were tearing it all down willy-nilly, with no direction whatsoever. I was able to capture a small portion of the Del Rio Hotel before the wrecking balls brought it down. It was a beautiful building, and they razed it with no consideration of the fact that these were people’s livelihoods, this was their community.

The men and women I talked to had no idea what they were going to do and how they were going to survive. When I was photographing the Baltimore Barbershop on Greenwood Avenue, I asked the owner, Mr. Gardner, what his plans were. He said, “I have no idea. This is my business. I’ve been doing this for over 25 years, and I’m too old to try to start another business.” He added, “I’ve been told I’m next.” I told him I would come back the next day so that I could talk to him some more. I said, “I’ll see you tomorrow,” and he said, “OK.” When I went back the next day, his business had been bulldozed down, and he was gone. I never saw him again.

You may have noticed that there’s still a small business section at the corner of Greenwood and Archer, before you get to the I-244 Crosstown Expressway. That was saved from being destroyed by a group of Black businessmen who got the city of Tulsa to agree to sell the businesses to them. One of those men was Ed Goodwin, publisher of the Oklahoma Eagle newspaper. So they managed to save that one small section, but the rest of it was demolished. I wish I could have documented more of it before it was all gone. But the bulldozers were faster than I was.

When I look back upon those days, I feel such a sense of sadness. In my opinion, I was witness to a second massacre. In 1921 the Greenwood District was destroyed by a mob of white Tulsans, but in the ’60s and ’70s the area was destroyed again by eminent domain and urban renewal. A photograph can have a lasting emotional effect on people, because it literally captures the moment: This did exist. This did happen. Here it is. We have the evidence right here. I wish we had more photographs from before the 1921 race massacre showing how Greenwood looked at the time, so that people could see its uniqueness, its power, and how people in the area lived.

KKH: I think that the work you were able to do in capturing those scenes of Greenwood before the destruction was really important. And you have continued to make a major contribution to the community and to its history. I view your impact in this regard as similar to what Reverend Hooker was able to accomplish in photographs the destruction of Greenwood in 1921 and the subsequent rebuilding of the community. Both sets of images tell the story of Greenwood’s resilience, a story that would be hard to tell without that visual evidence. Thank you for all the work that you have done and continue to do in your efforts to document the history of the Greenwood District.