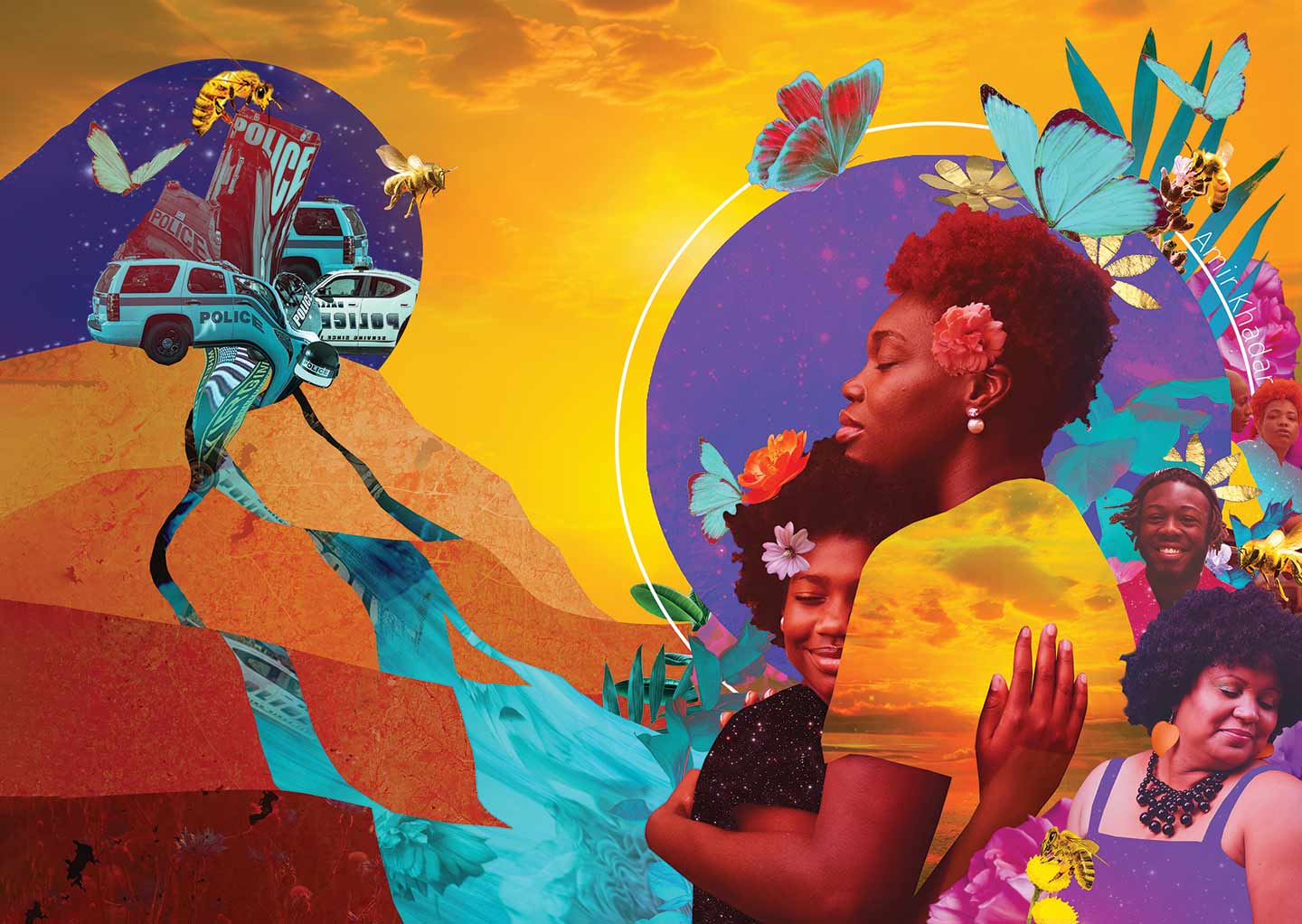 On November 7, in his first speech as president-elect, Joe Biden promised Black America that he would have our backs. But which Black America is he pledging to support? Having our backs does not mean multiracial cronyism; it means resources and results for those who need them most. We cannot let cosmetic cabinet appointments and historic “firsts” take the place of policies that steer money from the richest individuals and corporations to poor and working people, or allow the new administration to ignore economically disenfranchised communities of color.1

Police violence has long been at the forefront of Black demands for justice. As we mark the end of one phase of resistance (the campaign to oust Donald Trump) and embark upon the next (the renewed fight against neoliberalism), we must remind ourselves of the interconnectedness of race and class. The George Floyds, the Breonna Taylors, the Tony McDades, and so many more were beaten down not just by ruthless and racist cops but also by a political and economic system that abandoned their communities decades before their deaths. Biden’s first 100 days, and his agenda for Black America, need to begin by acknowledging this fact.2

Biden Should Establish an Office of Climate Mobilization

Biden Must End the Forever Wars

The Case for Wide-Scale Debt Relief

Biden talks a lot about the middle class and then segues to middle-of-the-road solutions to grave economic realities. We need robust policies like the Green New Deal and the Movement for Black Lives’ Breathe Act. The Rev. William J. Barber II and the new Poor People’s Campaign have underscored with eloquent persistence the disgraceful fact of continued poverty in one of the wealthiest nations on the planet. We need policies that reverse the obscene economic disparity in this country, with the richest 400 Americans owning more wealth than 60 percent of the overall population. More than 20 million jobs were lost because of Covid-19; many will not come back without some kind of government intervention. The government’s disinvestment in services and infrastructure has affected all low-income, under-resourced communities, but communities of color have taken a disproportionate hit. That hit occurred before Covid-19 and has been exacerbated by it.3

Instead of looking back to the years of Barack Obama—or worse, Bill Clinton—Biden must embrace a bold, forward-looking approach, even though he does not seem exactly bold or forward-looking. In fact, many of his cabinet appointees were plucked right from the Obama administration. Almost anything will be a relief from Trump’s pro-billionaire policies, but Biden and the corporate Democrats have their own wealthy friends. Brian Deese, Biden’s choice to lead the National Economic Council, and Wally Adeyemo, his pick for deputy treasury secretary, both have ties to BlackRock, which manages trillions of dollars of global assets. Others on the Biden-Harris team have been corporate board members and consultants, paid to maximize profits for their gluttonous clients. These are the interests that Biden’s new economic leaders are used to serving. We should be very skeptical that on January 20 they will immediately betray those loyalties to serve the rest of us.4

Even if Biden had appointed a more principled team of economic experts, many Democrats already bemoan that they may not be able to accomplish much, because depending on the outcome of the Georgia runoffs, a GOP-controlled Senate would block their best efforts. That’s not an acceptable excuse. The Biden administration needs to take unilateral action wherever possible with executive orders, personnel decisions, and the imposition of regulations on corporations. As Biden transition adviser and Roosevelt Institute director Felicia Wong told The New York Times, “There’s a tremendous amount that can be done without Congress.”5

And here is what is most necessary right now: emergency Covid-19 economic relief and a nationwide moratorium on evictions and foreclosures. The cash payments thus far have been woefully inadequate, and the suffering has been extreme. Based on data reported by 40 states, Northwestern University cardiologist Dr. Clyde Yancy found that one in every 1,850 Black Americans has died from Covid-19, a mortality rate almost two and a half times higher than that for whites. If Black people were dying from Covid at the same rate as whites, Yancy added, 13,000 more of them would still be alive today.6

To track the real economy, Biden and his aides will need to resist touting the stock market as a metric of economic success. It is not, and neither is the gross domestic product, which tells us an average while obscuring the disparities that coexist with economic growth. Even unemployment statistics are misleading and understate the problem. Millions of Americans in cities like Baltimore, Chicago, Detroit, and St. Louis have simply given up looking for work, are struggling in the underground economy, or are incarcerated and therefore not reflected in most unemployment numbers.7

Debt relief, especially for student debt, is also critical. The solution, though, is simple: Just eliminate student debt entirely. It is scandalous that so many hard-working students will spend a lifetime trying to pay off their principal because they dared to pursue an education. As a result of relentless campaigns by groups like the Debt Collective, the Biden administration is likely to propose some kind of debt relief. In a December 7 press conference, Senate minority leader Chuck Schumer announced that Biden is considering $50,000 in student debt forgiveness, which could be enacted via executive action. Bernie Sanders’s proposal to forgive the entire $1.6 trillion in student debt better approximates a just response to the crisis, but we are unlikely to see that from Biden’s administration.8

Another thing Biden can do without Congress is to rigorously enforce existing laws that close tax loopholes, restrict corporate profits, and garner revenue for social programs. Raising the minimum wage for federal contractors to $15 an hour should also be a no-brainer—and even $15 is too low now. Health care, like education, should be a right and not a privilege. It is a shame that Biden refused to commit to Medicare for All during his campaign, and while he has given a nod to an improved climate policy, the Green New Deal is not on his agenda. It should be.9

Finally, the Movement for Black Lives laid out a set of principles to combat racism with the Breathe Act, a far-reaching progressive policy that would be a game changer in terms of fighting the kind of systemic racism that Biden has said he opposes. The Biden transition team has reached out to various civil rights leaders, including the Movement for Black Lives, to listen to our concerns. But it has to do more than perfunctory listening sessions. The Breathe Act rests on four pillars: divesting from carceral institutions, which have failed to solve the issues of harm reduction and security; investing in community-based and community-led programs of accountability and harm and violence prevention; offering resources to build healthy, sustainable, and equitable communities throughout the country, including jobs and much-needed human services; and finally, making sure public officials are accountable to the communities they are sworn to serve, especially the Black communities that are most often neglected and ignored. These priorities embody the principle of self-determination and are the antithesis of Biden’s 1994 “lock ‘em up” crime bill and Clinton’s “abandon the poor” welfare reform policy.10

According to the Movement for Black Lives’ Monifa Bandele, this omnibus bill “is a bold, new vision for community safety that ends mass incarceration and criminalization while channeling federal dollars into non-punitive, public-safety-focused interventions as well as the educational, health, and other social investments that communities need.”11

Biden isn’t likely to enact all of these measures, but we must lean on him heavy and hard. We need to organize. We need to converge on Washington, DC, on Inauguration Day for a progressive (and mask-wearing) show of strength and unity. We should fill the streets, in DC and throughout the country, to remind Biden that the millions who elected him expect to see policies that will improve the lives not only of working people of color but of everyone—well, almost everyone. The 1 percent, of course, should see their power and wealth more fairly distributed. That is what a truly just transition would look like.12