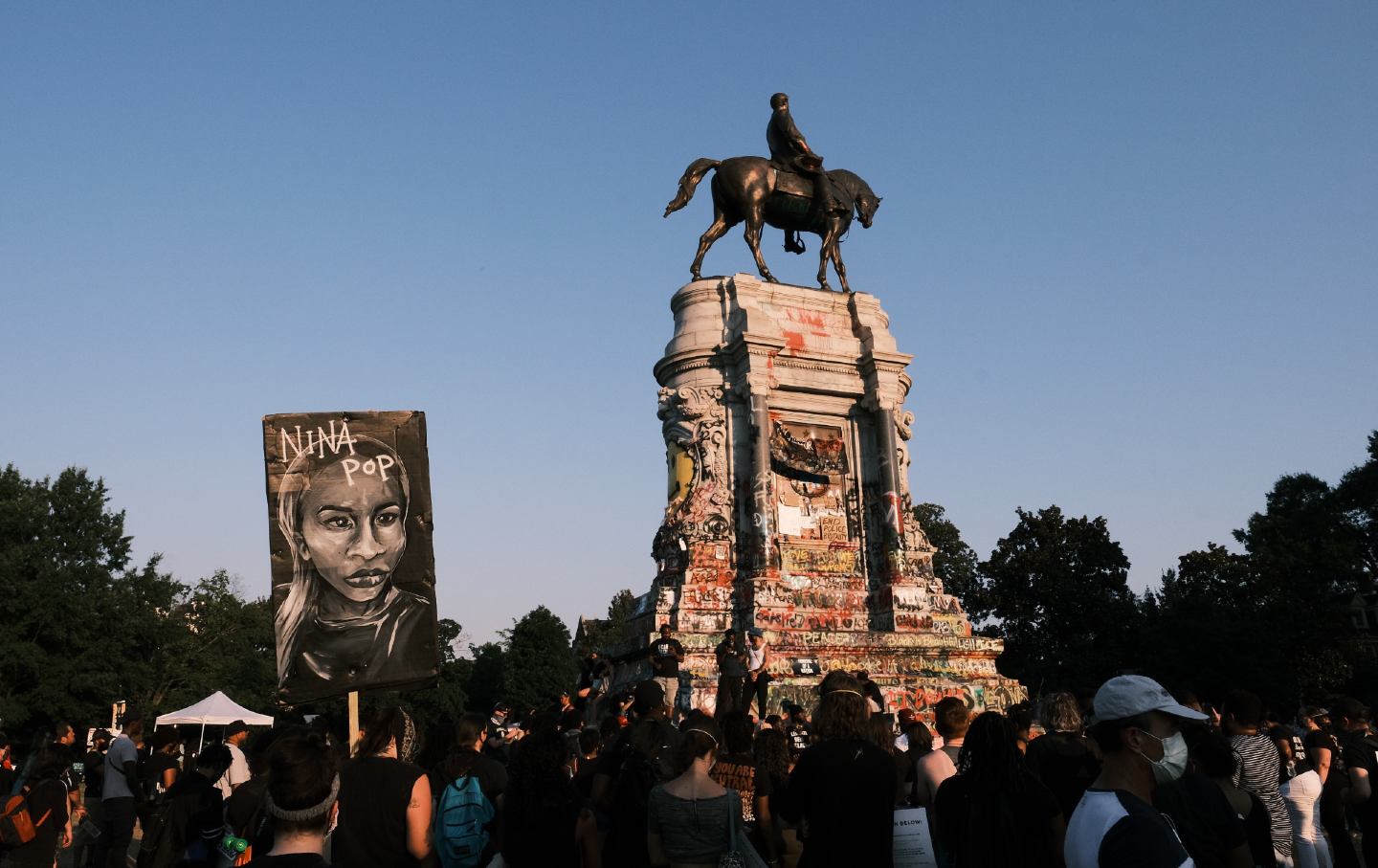 A protester holds up a poster of Nina Pop at the Black Women Matter “Say Her Name” march in Richmond, Va., on July 3, 2020. (Eze Amos / Getty Images)

In June 2011, a Black transgender woman named CeCe McDonald was walking with friends to a grocery store in her Minneapolis neighborhood when a group of white bar patrons began hurling racist, homophobic, and transphobic slurs, calling them “bitches with dicks,” “faggots,” and suggesting they “go back to Africa.” A white woman in the group became physically violent, throwing a glass at McDonald’s face that sliced open her salivary gland, requiring 11 stitches. When a male attacker lunged at her as she attempted to flee, McDonald, fearing for her life, grabbed a pair of scissors from her purse to defend herself, fatally stabbing her assailant in the chest. Despite a clear claim to self-defense, McDonald was the only person arrested at the scene. A Minneapolis court—after ruling her white male attacker’s swastika tattoo, meth intoxication, and assault rap sheet inadmissible—convicted her on a reduced charge of second-degree manslaughter and sentenced her to 41 months in a prison for men. Amid the worldwide outcry over criminal justice abuses against Black lives, it’s worth recalling that the same police department and prosecutor’s office that dragged their feet on arresting and charging George Floyd’s white police officer murderer acted swiftly in their punishment of a Black transgender woman who had defended her own life.

There are many more stories like McDonald’s. In 2006, Mariah Lopez, a Black Latinx trans woman, reported that New York City police officers sexually and physically assaulted and humiliated her, then jailed her with male inmates whose physical attacks left her with “broken cartilage in her nose, a broken tooth, and abrasions and bruises to her face and body,” according to an Amnesty International report. A 2019 video of cops in Kansas City, Mo., arresting Breona Hill, a Black trans woman, shows them slamming her head into the concrete twice before kneeling on her head and neck “in contrast to the officers’ statements,” according to the local prosecutor.

Layleen Xtravaganza Cubilette-Polanco, another Black trans woman from New York City, died last year in solitary confinement at Rikers Island, where she was being held on misdemeanor charges. Video shows that as she lay unresponsive in her cell, officers stood outside the door laughing before seeking medical assistance that might have saved her life. And on May 27—two days after Floyd’s killing—a Black trans man named Tony McDade was fatally shot by Florida police who repeatedly misgendered him in subsequent reports.

In its conspicuous disregard for the safety of Black trans and gender-nonconforming people, the criminal justice system is complicit in an epidemic of violence that has seen at least 21 trans or gender-nonconforming people killed in the United States this year alone. Those deaths occurred against a backdrop of the Trump administration’s unstinting assault on transgender rights. There are also long-standing disparities in areas like employment and housing, undergirded by anti-trans and anti-Black discrimination. Even before the coronavirus crisis, Black trans folks were twice as likely to be unemployed as Black cis people, 38 percent were living below the poverty line, and 42 percent had experienced homelessness at some point. Those numbers have likely worsened during the pandemic.

It’s critical that the fallout from racist and transphobic policing receive greater attention—and that conversations around defunding bloated police budgets and reinvesting in communities highlight how that money can benefit Black trans and gender-nonconforming folks. More attention has been given to those issues of late, as with the Brooklyn Liberation march last month, which drew 15,000 people, and the recent Queer Liberation March for Black Lives and Against Police Brutality. But emphasizing the particular devastation that policing does to Black trans lives and the focus on mitigating those issues should be consistently front and center.

We’re at a crucial moment in which all Black lives need recognition. And erasure, we should remember, is yet another form of violence.